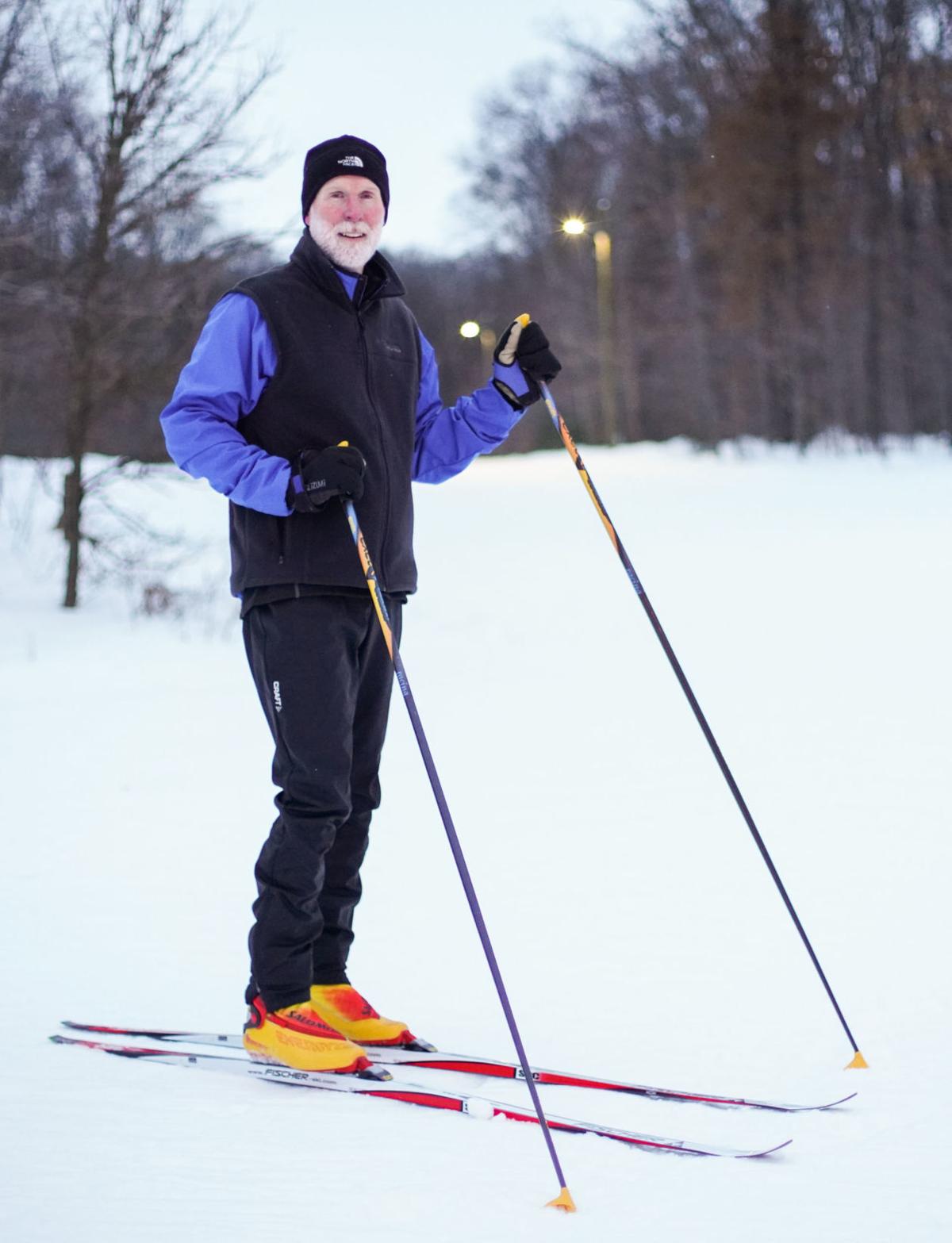 Mike Newby takes to the fast trails at Tower Ridge Recreation Area after undergoing hip surgery. His daughter and some co-workers are participating in this year’s Korteloppet cross country ski race during Birkie weekend in Hayward. He is planning to participate next year. 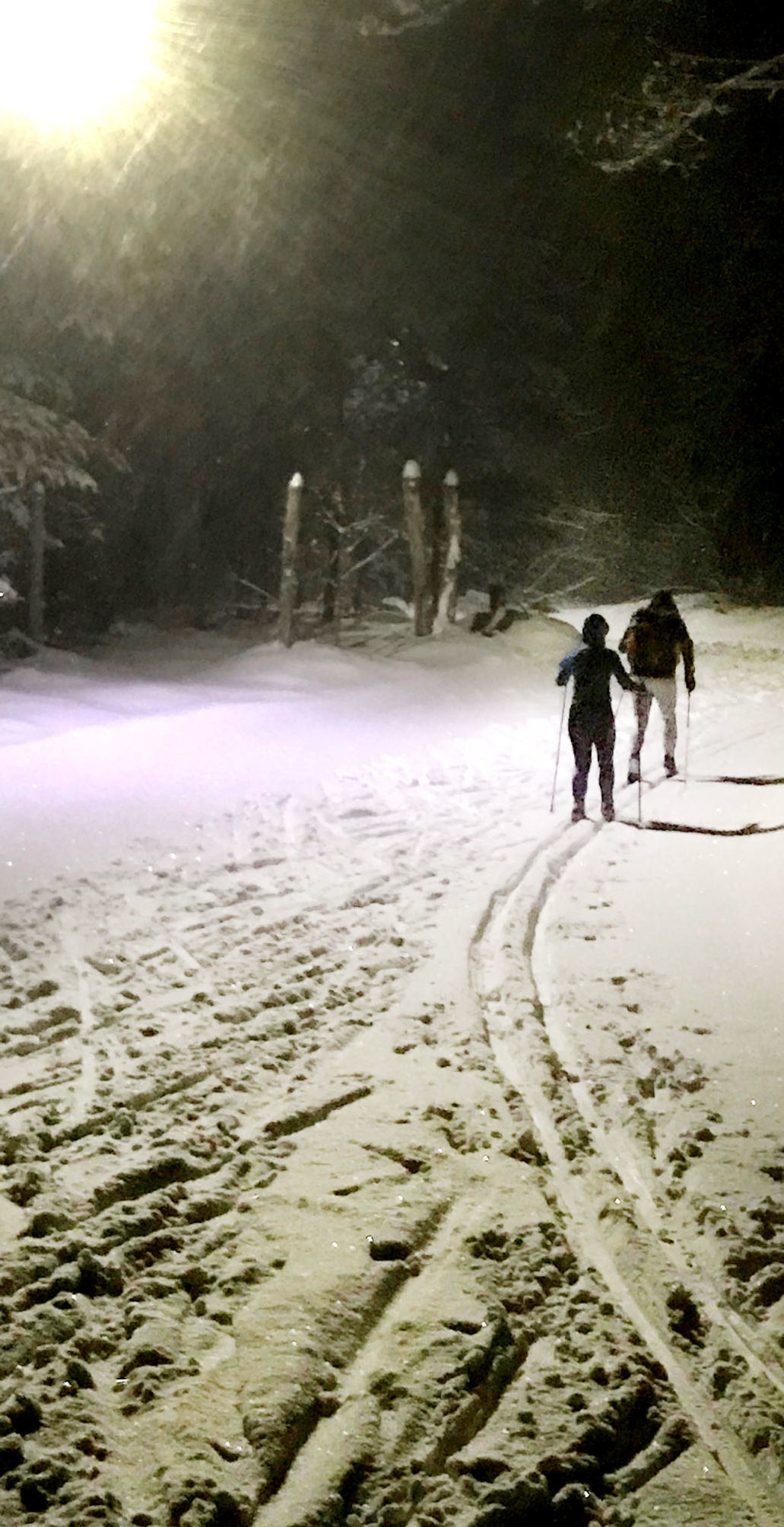 Skiers head down a trail under the lights at Tower Ridge Recreation Area. An Eau Claire Ski Striders project to upgrade existing lights and add more than another mile of lighted trail is nearing completion.

Mike Newby takes to the fast trails at Tower Ridge Recreation Area after undergoing hip surgery. His daughter and some co-workers are participating in this year’s Korteloppet cross country ski race during Birkie weekend in Hayward. He is planning to participate next year.

Skiers head down a trail under the lights at Tower Ridge Recreation Area. An Eau Claire Ski Striders project to upgrade existing lights and add more than another mile of lighted trail is nearing completion.

On a recent winter night, the sun slipping below the horizon, about 100 cars and several school buses filled a large parking lot in the Eau Claire County forest east of Eau Claire.

What had drawn them to this remote setting after hours? A cross-country ski race sponsored by the Chippewa Valley Nordic team at Tower Ridge Recreation Area.

The race, which featured boys’ and girls’ events, was possible because the trails were glowing under the halos of dozens of light poles, allowing about 140 skiers to safely speed around corners and up and down hills to the cheers of coaches and spectators.

Thanks to work spearheaded by the Eau Claire Ski Striders, racers and skiers in general at Tower Ridge have brighter lights and more of them. The lights are one of two projects that have improved the popular winter recreation area in the town of Seymour, with another project set to begin this summer.

Working with the county, the Striders are replacing 56 light poles and have added 33 poles to illuminate an additional 7,000 feet, providing more than three miles of lighted trail, including three hills. The trail system overall is about 12 miles.

The original poles were installed in 2000 and had begun to rot, in part because they were used. New LED lights provide about twice the light at half the cost as the old lights, are quieter and have new digital timers to keep them on until just past 9 p.m.

Ski Striders Secretary Fred Boetcher, who is overseeing the project, is one of the happy skiers. “My wife and I like to ski at night, and we are seeing a lot more cars in the parking lot now, a lot more skiers,” Boetcher said.

With more and brighter lights, the night skiing is better and safer, said Boetcher, who has an electrical engineering background.

The project began in 2018 and will be finished this summer when the final 18 poles and lights are replaced, with volunteer help from Chippewa Valley Technical College students in a power distribution class.

The Ski Striders raised $32,000 for the lights, an amount the Department of Natural Resources will match with a Recreational Trails Program grant.

“The new lights already are helping with our operation costs, and the feedback from skiers has been great,” said Josh Pedersen, director of the county Parks and Forest Department.

Along with the lights, skiers have other new directional aids — about 100 trail name signs added this season and 50 upgraded trail maps installed a year ago.

Trail sections — such as Snow Dance, Serenity Now, Escalator, West Wing, Meander, Big Falls — have been named to help skiers identify their location on the many intersecting loops.

“They’re especially nice for people who are new to the trails or don’t ski out there a lot. You can get your bearings,” said Bob Jankowski, who led the signs and maps projects for the Ski Striders.

Every main intersection has a new 12-by-18-inch trail map, eliminating the need for printed maps at the chalet, Jankowski said. Near the chalet and inside are 24-by-36-inch maps.

The old trail maps were laminated paper and needed frequent upkeep. The new ones are larger, color-coded for trail difficulty and weather-resistant. They also have a QR code that skiers can scan to reach the county webpage and, essentially, take the map with them.

The maps were designed by Sue McDonald, an employee in the county clerk’s office. She had made them for the mountain bike trails at Lowes Creek County Park, so Jankowski sought her help at Tower Ridge. He also solicited skier feedback.

Another improvement at Tower Ridge could begin this summer. The Ski Striders are fundraising to develop two youth skills development areas near the chalet, one for young children and one for more experienced skiers.

The areas, in the woods near the trailhead, would have skills challenges such as jumps, bumps, figure-eights, slaloms and compression turns to help skiers improve their techniques.

The skills areas are popular at trails in Europe, according to Chris Gorzek, who is overseeing the project with county support.

“Our mission is to get more kids out there and have fun on skis. It will improve their skills, fitness and general athleticism,” Gorzek said.

Pedersen said the project budget hasn’t been determined, but another DNR grant will match up to $43,500 raised by the Striders. Fill will have to be brought in to help create some of the features, and some trees will be removed.

“This is not found at a lot of places. We’re kind of on the leading edge of cross-country ski development,” Pedersen said. “It’s a great concept. There aren’t a lot of projects we get to work on that are this unique.”

The skills areas, which will be open to all skiers, could be ready for the 2020-21 season.

The Kick ’n Kids learn to ski program on Monday nights in the winter regularly draws about 100 children.

The Karl Andresen Ski Trails at Tower Ridge are named for the late Altoona resident and former UW-Eau Claire professor. He was influential in their development and was a founding skier at the American Birkebeiner.

A vehicle entrance pass, daily or annual, is required. About 300 winter passes are sold each year, Pedersen said. The fees help pay for trail grooming, electricity and other operating costs.

Tower Ridge, which has a chalet with bathrooms and a common area, also has snowshoe trails and a disc golf course. In spring, summer and fall, the trails are open to hikers and a portion for horseback riders.

Poling is a freelance writer from Eau Claire.