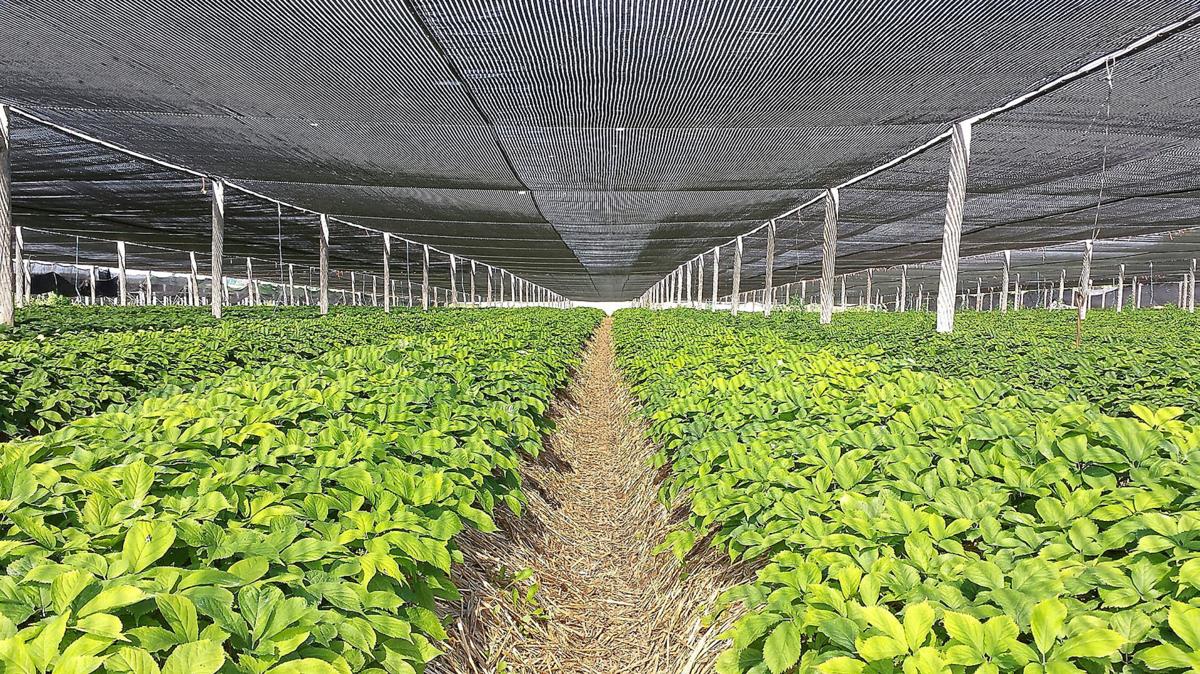 Wisconsin is known as the premier ginseng cultivator in the world, with Marathon County leading production. Ginseng is protected with a tarp during the warm summer months to prevent it from being damaged by direct sun.

Wisconsin is known as the premier ginseng cultivator in the world, with Marathon County leading production. Ginseng is protected with a tarp during the warm summer months to prevent it from being damaged by direct sun.

WAUSAU — Just as the signing of a preliminary trade agreement offered the promise of relieving strained relations with China, the deadly new coronavirus outbreak and resulting travel restrictions have tempered expectations for an uptick in trade between the U.S. and China.

Each year, Wisconsin farmers grow more than 1 million pounds of ginseng, and about 85% of that is exported to China, which in turn brings between $30 and $50 million back to Wisconsin farmers.

Will Hsu, president of Hsu’s Ginseng Enterprises in Wausau, said ginseng is traditionally given as a gift during the Chinese New Year celebration as a means of wishing good health, well-being and longevity on the recipient. Often ginseng is bought by visitors to the U.S. to give as gifts when the return to China.

“A lot of Chinese consumers trust the food safety system here in the U.S. It’s better than what they have in Asia,” Hsu said during a U.S.-China trade discussion panel Jan. 24 in Wausau. “They buy the products here in the U.S. and take them home for gift-giving.”

Hsu said the tariffs on ginseng heading to China from Wisconsin that have risen from about 8% to 48% in just more than a year are deterring travelers from returning to China with the product because of the additional costs they incur when taking ginseng through customs.

With Chinese tariffs on ginseng imported from the U.S. driving up the price of a product that can already cost more than $50 per pound, Hsu said the industry is feeling push-back from Chinese consumers.

“The customer that’s buying the ginseng in China doesn’t want to pay more, so they’ve asked the farmer here in Wisconsin to reduce the price commensurate with the tariff increase, so the farmer receives less money locally for their crop,” Hsu said. “It’s not that the industry is producing more, it’s not that demand has gone down, it basically just created an artificial barrier in price because the consumer doesn’t want to pay more.”

Phase 1 of the U.S.-China trade agreement doesn’t lower tariffs on goods like ginseng, Hsu said, but it at least stops them from increasing for the time being.

However, Hsu said, the coronavirus outbreak, which has killed more than 560 as of Feb. 6, could prove to be another limiting factor in seeing trade with China improve.

Hsu said restrictions that have been placed on travel since the coronavirus outbreak remind him of a similar response to the SARS virus in 2003, another difficult time for the ginseng industry.

“We’re seeing reduced traffic and reduced purchasing of the product,” Hsu said. “When you have reduction in travel, you have less gift-giving.”

Phase 1 of the U.S.-China trade deal, which was scheduled to take affect in mid-February, commits Beijing to boosting its imports of U.S. manufacturing, energy and farm goods by $200 billion over the next two years. That includes larger purchases of soybeans and other farm goods expected to reach $40 billion a year, according to the U.S. Department of Agriculture.

The trade deal includes a clause calling for further discussions between the U.S. and China should “a natural disaster or other unforeseeable event outside the control of the Parties” delay one of the countries from complying with its obligation under the agreement.

U.S. Department of Agriculture Secretary Sonny Perdue said during a late January media call that it was still too early to tell if the coronavirus outbreak would reduce chances of China meeting its commitments to buying U.S. ag products.

“It’s obviously going to have some ramifications economy-wide which we hope will not inhibit the purchase goals we have for this year,” Perdue said.

Charles Wachsmuth of Chippewa Valley Bean in Menomonie, the largest kidney bean grower and processor in the world, said said his company’s product was ready to expand in the Chinese marketplace.

Research showing the health benefits of kidney beans has led to increasing Chinese consumption of the product in the past decade, he said. That growing consumption has taken Wachsmuth to China, first to visit fields where their farmers were growing kidney beans then to canning plants and stores. Wachsmuth said the increasing consumption is also leading to their company making a push into the Chinese market.

Wachsmuth said that because their company is just hoping to make inroads into China, it is important that they stay visible in the country.

“China has the potential to be our largest market moving forward,” Wachsmuth said. “I go to China every year just to keep my face in front of people in hopes that these tariffs will go away at some point.

“It’s a big investment on our part just for high hopes.”