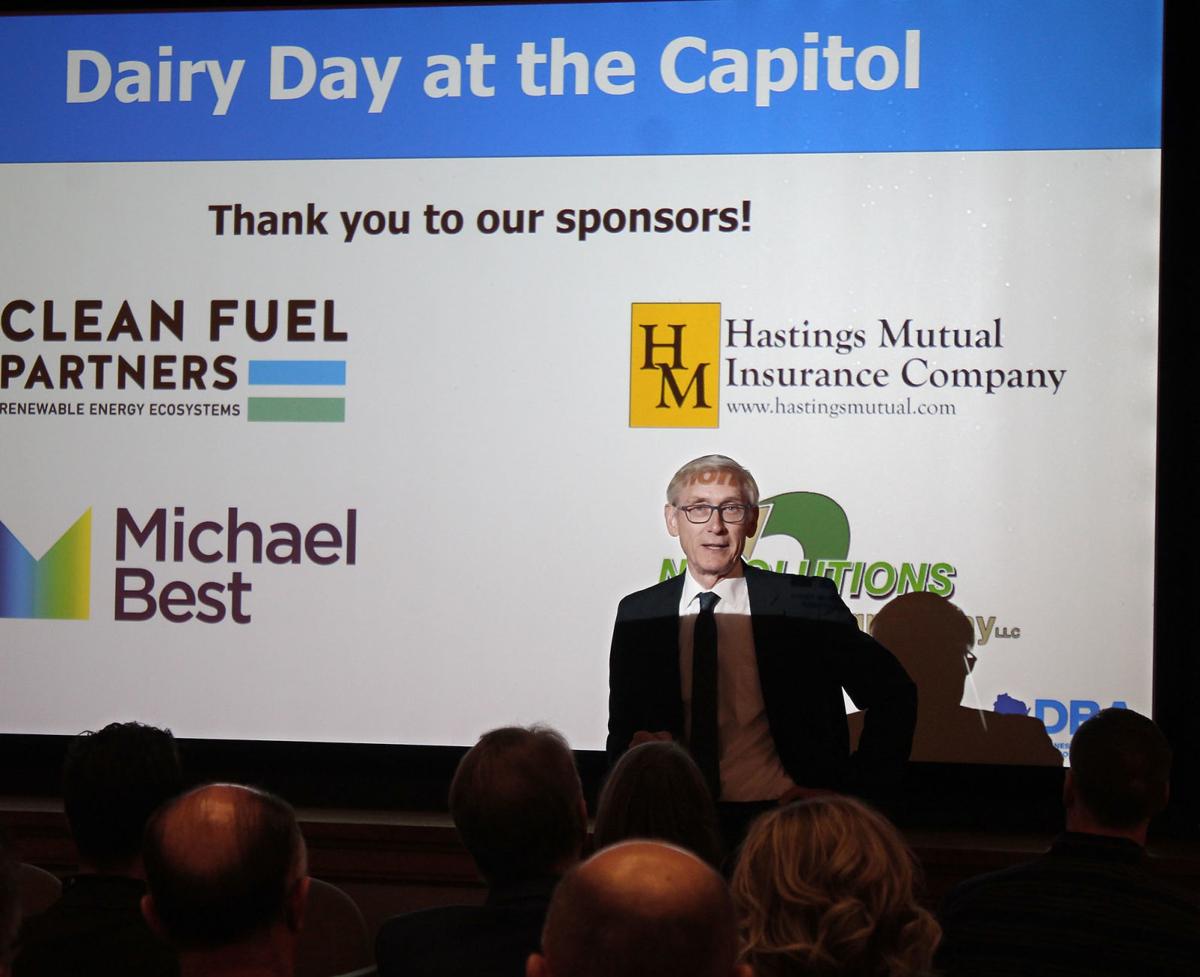 Gov. Tony Evers addressed members of the Dairy Business Association at its first-ever Dairy Day at the Capitol on April 10, outlining several areas of his budget that should prompt support from the state’s dairy industry. 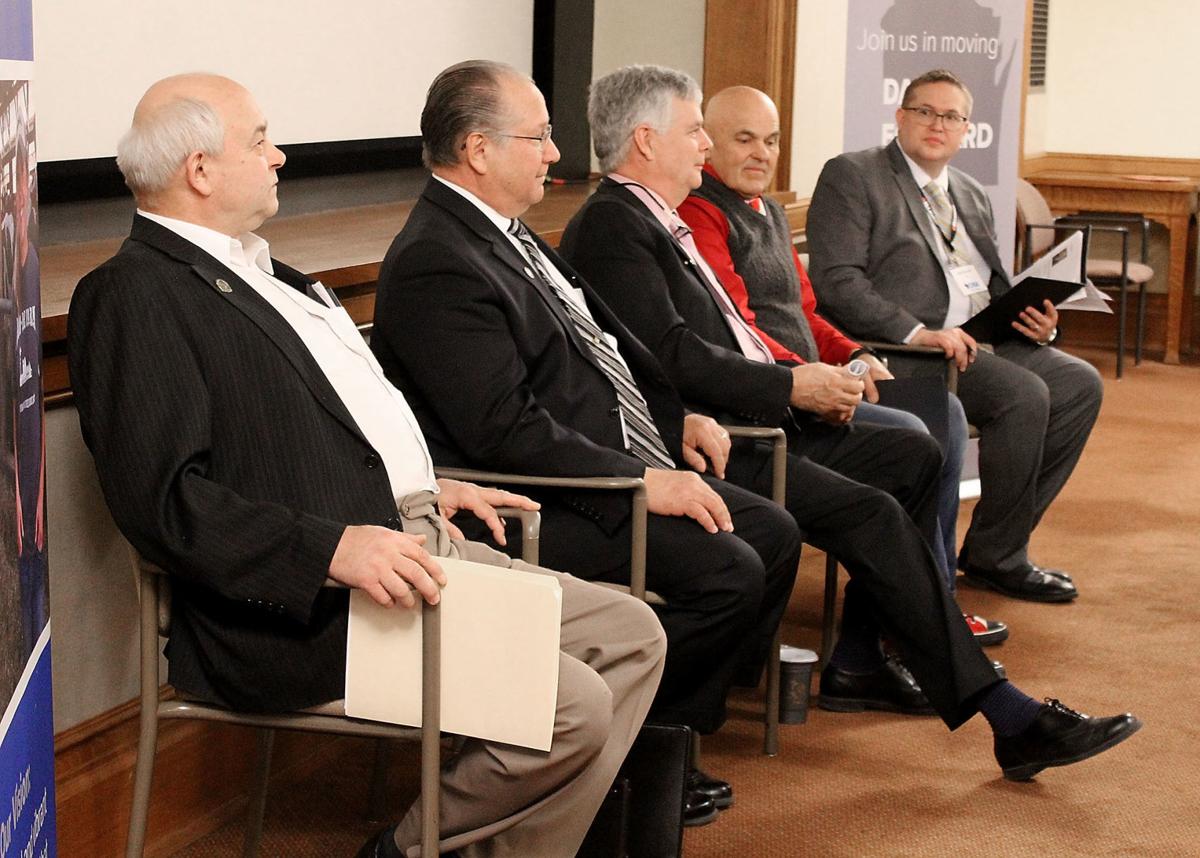 Gov. Tony Evers addressed members of the Dairy Business Association at its first-ever Dairy Day at the Capitol on April 10, outlining several areas of his budget that should prompt support from the state’s dairy industry.

MADISON — Farmers have done everything asked of them, from embracing technology to implementing good practices on the farm, and now it’s time for the state to reciprocate that, Wisconsin Gov. Tony Evers told members of the Dairy Business Association April 10 at the Wisconsin Capitol.

While members of the Dairy Business Association have been involved in numerous agricultural-focused events at the Wisconsin Capitol, they held the first ever Dairy Day of their own April 10, gathering in the hearing room of the Joint Finance Committee to discuss the association’s top priorities and hear from legislators, as well as the recently elected Evers.

Evers asked members to keep in mind several items detailed in his biennium budget that could impact Wisconsin’s dairy industry, including the issuance of driver’s cards to non-citizens, which Evers also called a workforce issue; additional funding for the UW System, specifically an increase in research dollars; improvements to broadband in rural areas; clean water initiatives; and a proposed solution to the state’s transportation woes.

John Holevoet, DBA’s director of government affairs, provided an overview of the association’s own priorities, many which overlapped items supported by Evers and Pfaff.

The DBA supports an investment in dairy research through the establishment of a UW Dairy Innovation Hub, which would include researchers stationed at UW-Madison, UW-Platteville and UW-River Falls. The dairy hub would take research to the next level, Holevoet said, studying the areas of land and water stewardship, human health and nutrition, animal health and welfare, and how to grow farm businesses and communities in rural areas.

“This proposal can check both boxes,” Holevoet said, referring to the “dairy crisis” and water-quality interests of the new administration.

Funding for the hub currently is not included in the UW budget, but the DBA is asking the Joint Finance Committee to include $7.9 million per year to fund it in the budget they plan to present to the governor.

DBA also supports a long-term transportation funding solution, recognizing that the state cannot continue to borrow to pay for its roads. And while the association doesn’t know what the solution will look like, it will have to include some new revenue sources and take into consideration the importance of rural roads and bridges throughout the state.

“This can be an area where we can really make an impact,” said Shawn Pfaff, a DBA contract lobbyist. “The issue is top of mind and I think they want to hear from business people and farm country.”

Assemblyman Don Vruwink, D-Milton, recommended hitting the senators hard with this issue, as he believes the Assembly has the bipartisan appetite to find a solution, while the hang-up appears to be in the Senate, specifically with legislators in metro areas of the state.

While controversial, DBA also supports giving immigrant workers the ability to drive legally, provided they are properly trained and insured. Evers said he thinks of it as a workforce issue, but it can also be considered a public safety issue, Holevoet said.

“This isn’t about immigration or voting privileges,” he said, explaining that the driver’s card would be used for driving purposes only.

Evers has included a provision to allow driver’s cards for non-citizens in his budget, but the DBA believes it is unlikely it will remain in the budget that will be passed by the Legislature. The association appreciates his support on this issue and will continue to work on it outside of the budget process.

Other budget priorities supported by DBA include additional support for the DATCP’s Wisconsin Initiative for Dairy Exports, continued funding for farmer-led watershed initiatives and dairy processor grants, adequate funding for the nonpoint program, and the current version of the Manufacturing and Ag Tax Credit, which is proposed to be capped in Evers’ budget.

DBA also opposes an increase in fees paid by concentrated animal feeding operations during the permitting process; they also oppose the current CAFO program, stating that it “really needs a complete overhaul” instead of just increasing funding and adding more staff members.

As for non-budget related priorities, DBA supports nutrient-trading legislation to reduce the amount of phosphorus and other nutrients that reach surface and groundwater. This legislation is a win-win-win for agriculture, industry and the environment, Holevoet said.