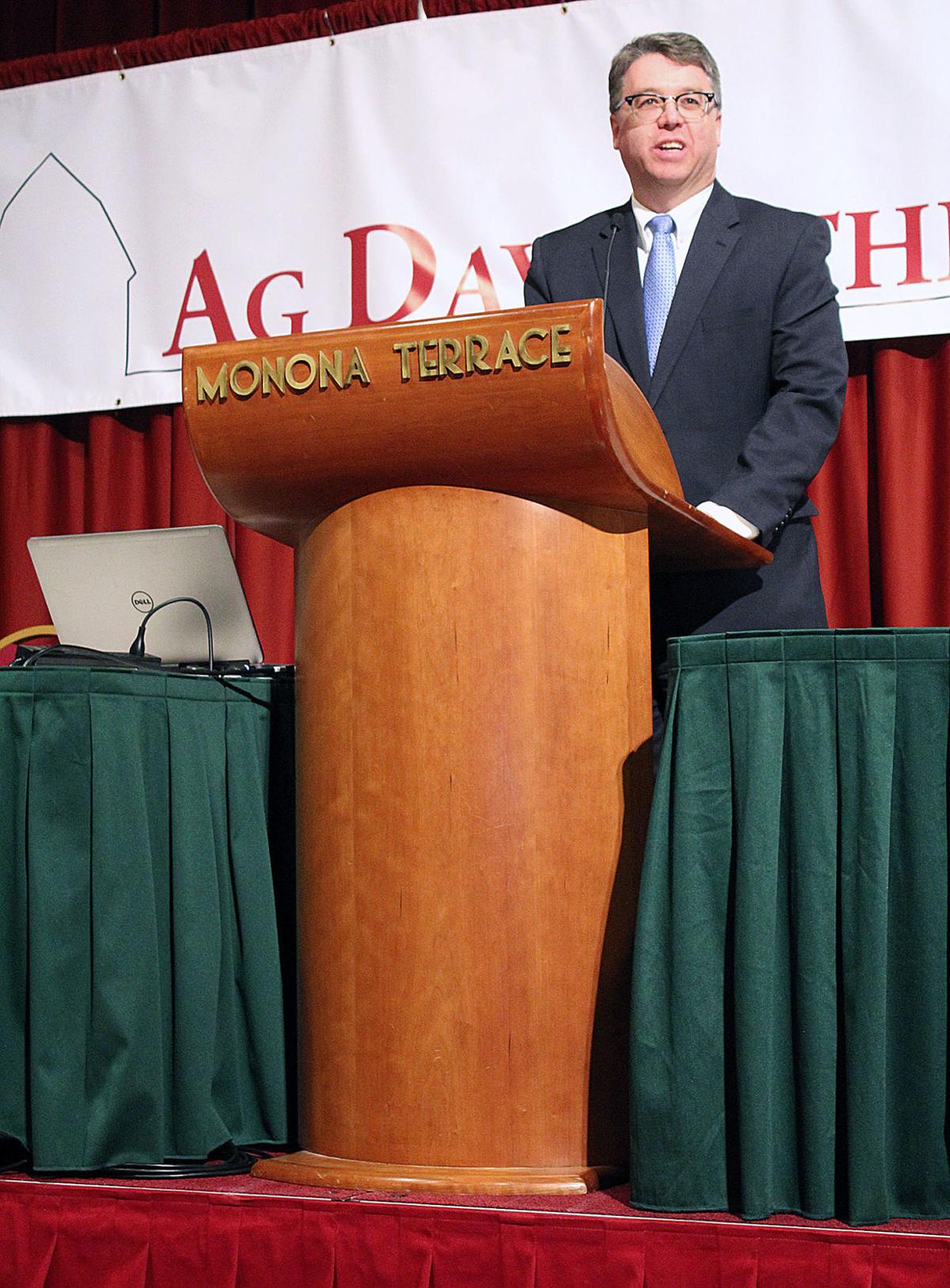 Brad Pfaff, then secretary-designee of the Wisconsin Department of Agriculture, Trade and Consumer Protection, addressed more than 300 producers and industry leaders who attended the Wisconsin Farm Bureau Federation’s Ag Day at the Capitol on March 20. On Nov. 5, the Wisconsin Senate rejected Pfaff's confirmation by a 19-14 vote.

Brad Pfaff, then secretary-designee of the Wisconsin Department of Agriculture, Trade and Consumer Protection, addressed more than 300 producers and industry leaders who attended the Wisconsin Farm Bureau Federation’s Ag Day at the Capitol on March 20. On Nov. 5, the Wisconsin Senate rejected Pfaff's confirmation by a 19-14 vote.

MADISON — Despite pressure from ag industry groups and Democratic efforts, the Republican-controlled State Senate voted Nov. 5 to reject the confirmation of Brad Pfaff as Department of Agriculture, Trade and Consumer Protection secretary.

The highly unusual move came after Republican Senate Majority Leader Scott Fitzgerald indicated Nov. 1 that Pfaff, who had served since January, did not have the votes necessary and urged Governor Tony Evers to withdraw his nomination.

Evers did not withdraw his nomination, and the vote would go on as scheduled.

In a letter to the Senate signed by WCGA President Doug Rebout, the organization wrote, “Our members need stability and continuity. They need someone to speak on their behalf, to work on their behalf and to put it simply: someone to care. Brad Pfaff is that person.”

A statement of support from DBA, which is the state’s largest dairy lobbying group, included similar sentiments, saying that at a time when dairy farmers face a “perfect storm of challenges” ranging from milk prices and weather to changing regulations and trade disruptions, they need “certainty and stability, not a political fight.”

Several state and national legislators voiced their support as well, but the Senate was not swayed, voting 19-14 along party lines to reject the appointment and marking the first time in modern history that a Wisconsin gubernatorial cabinet nominee has been rejected by the Senate.

In a statement after the vote, Evers said, “I was honored to be able to appoint Brad, and it has been my honor to have the opportunity to serve alongside him these past eleven months.

“And that’s why Republicans’ actions today were nothing short of callous and cruel.”

Evers went on to say that calling the vote “a dark day for Wisconsin is simply an understatement.”

Prior to the final vote, the Senate Committee on Agriculture, Revenue and Financial Institutions, which included five Republican members, had voted unanimously to approve Pfaff in February. The Republican members of that committee all voted against Pfaff on Nov. 5.

State Sen. Howard Marklein, R-Spring Green, is listed as chair of that committee.

In a statement following the rejection, Marklein stated that at the time he voted for Pfaff in February, “I was hopeful that Mr. Pfaff would be positive, strong leader for an agency that has traditionally been nonpolitical and focused on the industries it supports.

“Unfortunately, I was disappointed by Mr. Pfaff’s actions over the last eight months,” Marklein continued, going to accuse Pfaff of “play(ing) politics with information” and “attack(ing) the legislature to the detriment of his agency.”

Earlier this year, Pfaff riled some Republican lawmakers after publicly criticizing the failure of the Legislature’s budget committee to release $200,000 in funds dedicated for farmer mental health. The funds were eventually released.

State Sen. Jon Erpenbach, D-Middleton, defended Pfaff’s actions toward the budget committee in statement following the final vote, “Our Agriculture Secretary — whose job it is to defend and advocate for farmers — had the courage to stand up and fight for farmers and against suicide.

“Unfortunately, that courage wasn’t replicated on the Senate floor today,” he continued, adding that switched votes “cost our farmers the best qualified candidate for the job.”

Darin Von Ruden, president of Wisconsin Farmers Union and a Westby organic dairy farmer, said on behalf of the organization, “Pfaff, who was incredibly qualified and already had spent nearly a year in his role, was sacrificed for standing up for the very family farmers he was meant to represent.”

Prior to being nominated as DATCP secretary, Pfaff’s resume included serving as U.S. Rep. Ron Kind’s deputy chief of staff as well as Wisconsin state executive director and national deputy administrator at the U.S. Department of Agriculture Farm Service Agency.

He also grew up on a dairy farm in La Crosse County.

Von Ruden stated that WFU appreciated “Pfaff’s long-time commitment to family farmers” and that it seemed the Senate was “punishing” Pfaff for pushing farmers mental health and revisiting ATCP 51, the livestock siting law.

As the DATCP Board met Nov. 7, a few days after the vote, Evers visited with DATCP staff to assure them that their work is important during this time of change within the department.

“I was hoping the legislature would have approved Brad — there was no reason for them not to — but frankly, I’d say they took an immoral approach and decided politics were going to trump competence and passion,” Evers said.

Evers has named Randy Romanski, who served as deputy secretary under Pfaff, as the interim secretary of the department. He has no successors in mind at this point in time as he assumed the Senate would have approved Pfaff.

This is the second time Romanski has served as interim DATCP secretary; following the death of then-DATCP Secretary Rod Nilsestuen in 2010, Romanski was named interim secretary.

Romanski addressed the DATCP board Nov. 7, admitting he wondered how the day following the Nov. 5 Senate vote would start. As it turned out, it started just like any other day before — with a morning phone call from Pfaff as Romanski was brushing his teeth.

“I’ll be honest with you, I wish it were Brad sitting here talking to you instead of me,” Romanski said at the opening of the DATCP board meeting. “He loved his job and he loves this agency, but you guys know this because you’ve spent some time with him.

“He has an energy and exuberance about agriculture in Wisconsin, Wisconsin products and telling the story of agriculture — it was something he did everyday with the agency.”

“There’s some things in life that life doesn’t really prepare you for, and this is one of those,” he said. “It’s an unfortunate and unexpected thing we’re all going through at the agency.”

Two other cabinet nominations for Insurance Commissioner and Public Service Commission were unanimously approved on the day Pfaff was rejected.

With those confirmations, the total number of approved agency leaders since Evers took office rose to seven. Several other nominees remain in limbo, although they are allowed to serve until a vote is taken.

Brooke Bechen contributed to this report.