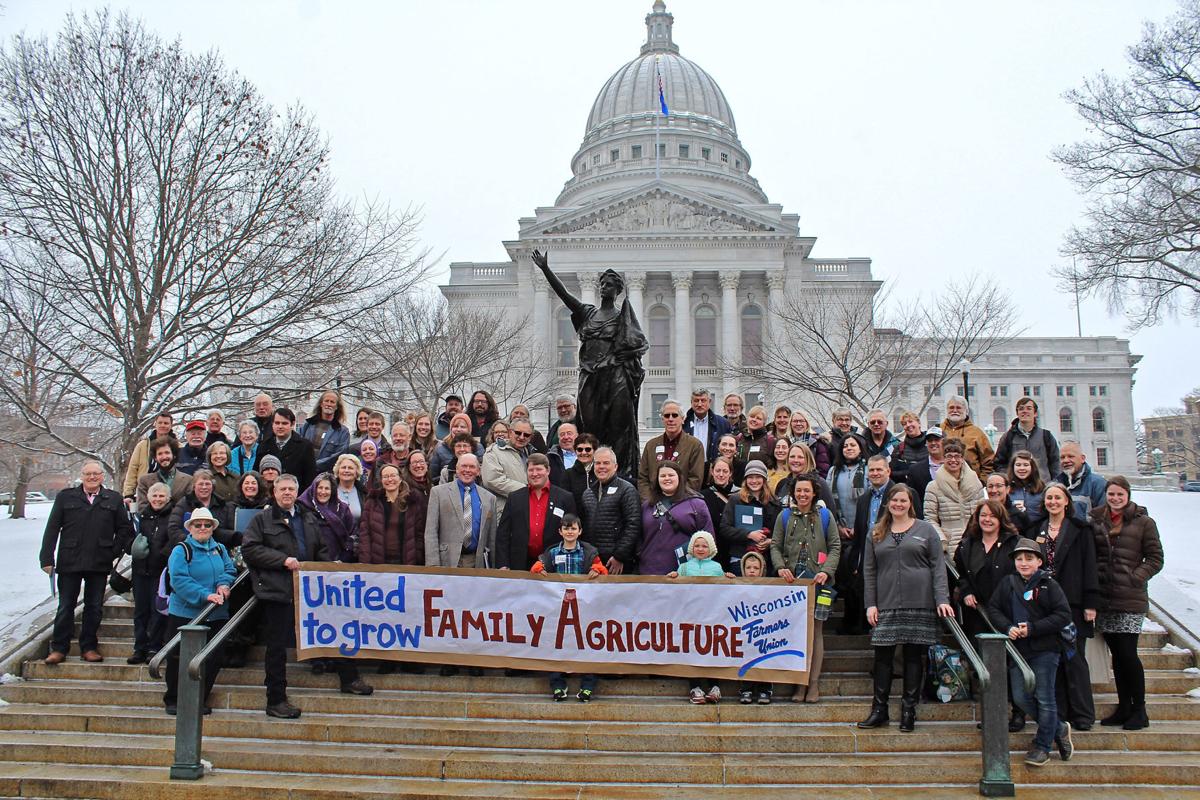 Following tradition, members of the Wisconsin Farmers Union posed for a photo in front of the “Forward” statue before heading to the offices of legislators at the Wisconsin state capitol. 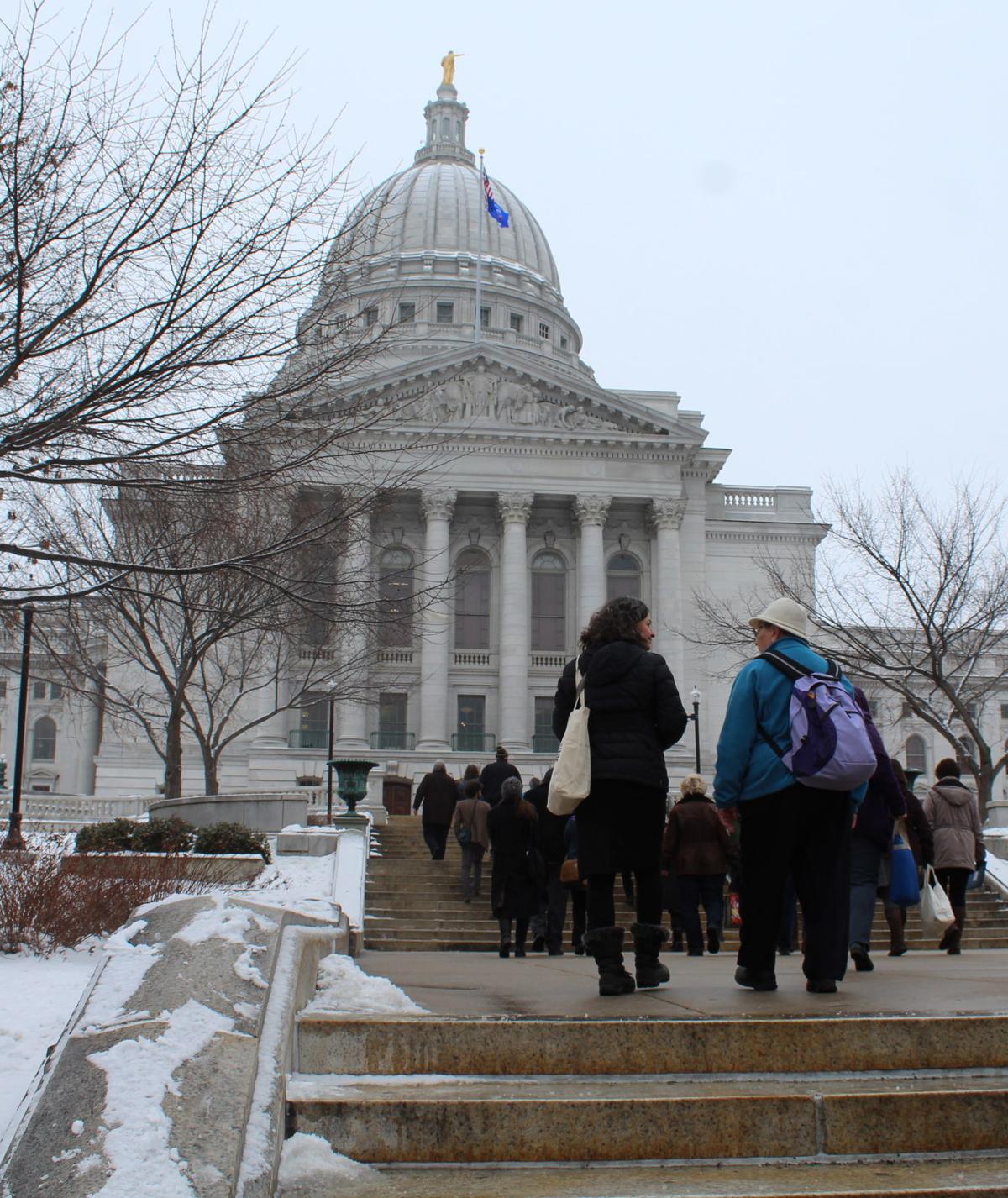 Following tradition, members of the Wisconsin Farmers Union posed for a photo in front of the “Forward” statue before heading to the offices of legislators at the Wisconsin state capitol.

MADISON — Wisconsin Farmers Union president Darin Von Ruden stood at the podium in the banquet area of Bethel Lutheran Church, looking out into the membership that had gathered for the organization’s recent Farm and Rural Lobby Day. There were lots of new faces in the crowd, prompting Von Ruden to ask how many people were to participate in the event for the first time on Jan. 15. To his surprise, over a dozen people raised their hands.

“It’s a real experience to go and talk to an elected official,” he said. “They have responsibilities and we need to hold their feet to the fire on those.”

Kara O’Connor, Wisconsin Farmers Union Government Relations director, admitted that the lobby day was among one of her favorite days of the year as “this is where the rubber hits the road.”

“This is such an ideal time to come to Madison,” she added, as the Wisconsin legislature is nearing the close of their legislative session.

Several speakers briefed the membership on three issues the Farmers Union has taken a position on, including clean water, farmland preservation and nonpartisan redistricting. After listening to the speakers and enjoying fellowship over lunch, Farmers Union members walked to the state capitol to share their thoughts with their prospective legislators.

State Rep. Todd Novak, R-Dodgeville, traveled 2,500 miles in 2019 with members of the Speaker’s Task Force on Water Quality, in which he was appointed chair. An alarm had been raised early last year after initial results from a groundwater study in southwest Wisconsin indicated high amounts of nitrates in private wells, prompting Novak and neighboring State Rep. Travis Tranel, R-Cuba City, to ask for the formation of the Task Force on Water Quality.

Thirteen bills were recently introduced, with Jan. 15 serving as the deadline for Assembly members to sign on as co-sponsors of the set of bills released through the task force’s report and recommendations.

“This is a start — we’re not finishing here,” Novak said. “Clean water is high on the radar and it’s about time.”

Wisconsin Farmers Union supports five of the bills in particular that came out of the water quality package, including increased funding for county conservation staff; conservation assistance to farmers through the hiring of a state managed grazing specialist, an incentive to try cover crops through a rebate program on crop insurance premiums and increased funding to producer-led watershed groups; support for additional groundwater testing, mapping and educational outreach so other counties in the state can know what’s in their drinking water and better understand water quality issues; the creation of a pilot grant program for farmers to reduce nitrates; and improvements to the Well Compensation Program.

Novak called for Farmers Union members to help him stress the importance of these bills in the state Senate, where he anticipates they may get hung up. He has no doubt it’ll make it through the Assembly, and even though rural senators are very supportive, there are other senators that don’t want to spend any money — even on clean water initiatives.

Rep. Loren Oldenburg, R-Viroqua, said his farm near Viroqua has been in his family for 141 years. He’s passionate about the farm and farm issues, sharing his support for Assembly Bill 637, which aims to continue to preserve farmland and natural resources for the future through farmland preservation.

These improvements to farmland preservation come after a DATCP survey found that 45% of farmers agreed that farmland preservation program incentives are too low to make participation worthwhile. Forty-four percent of farmers who responded to that survey also indicated they previously claimed the credit but no longer do because it was not high enough to offset the costs of meeting the required conservation standards.

Oldenburg echoed Novak’s comments, stating that headwinds will likely come in the state Senate. But on a positive note, he said that DATCP has stated it is willing to put $180,000 each budget back into local land and conservation offices to encourage and better educate farmers on the benefits of farmland preservation.

“That’s a very exciting part, working with DATCP to put people in these offices to help farmers,” he said. “They are more local and can provide hands-on expertise to help landowners.”

Nonpartisan redistricting and banning gerrymandering have been priorities for Wisconsin Farmers Union members for years, and according to Matthew Rothschild, executive director of Wisconsin Democracy Campaign, the battle is heating up. Pressure has been building, with Rothschild predicting that legislation will get passed in relation to this issue by 2024.

“The momentum is building and that’s how we make change,” he said. “This is how social change happens — at the grassroots.”

Gerrymandering is a tool used by both political parties to maximize their legislative representation, despite the will of voters. Districts that are gerrymandered often have odd shapes that deviate from municipal lines and pack voters of the same political party together, resulting in uncompetitive elections.

“It’s wrong for anyone to rig maps,” Rothschild said. “You lose your voice and we should all have an equal voice.”

Fifty counties in Wisconsin have passed resolutions to support nonpartisan redistricting, while eight counties have also passed referendums to support fair maps. A handful of other counties and municipalities also have referendums that will appear on ballots in April and November this year.

“The people are with us,” Rothschild said. “We just want a level playing field.”

He asked members to support two bipartisan bills currently in the legislature that ban gerrymandering and to support a public hearing on the issue.