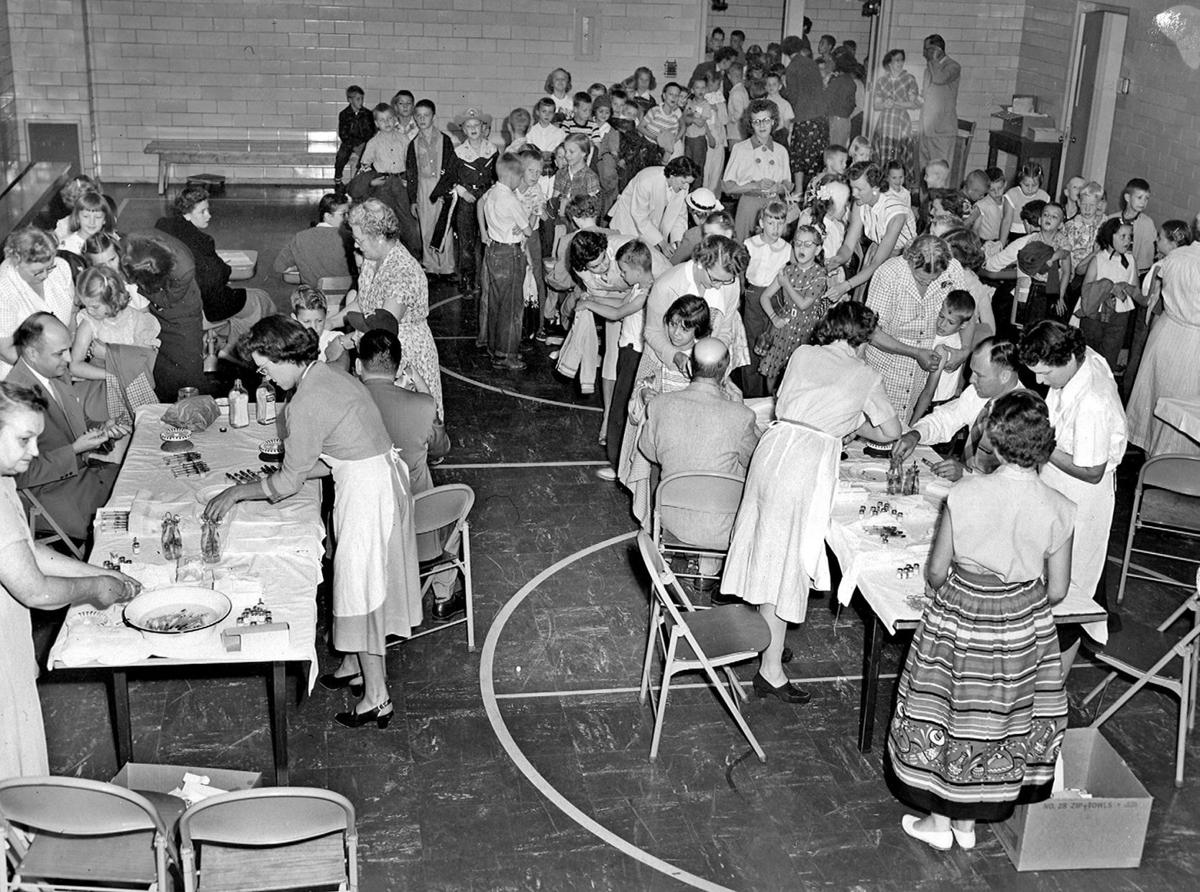 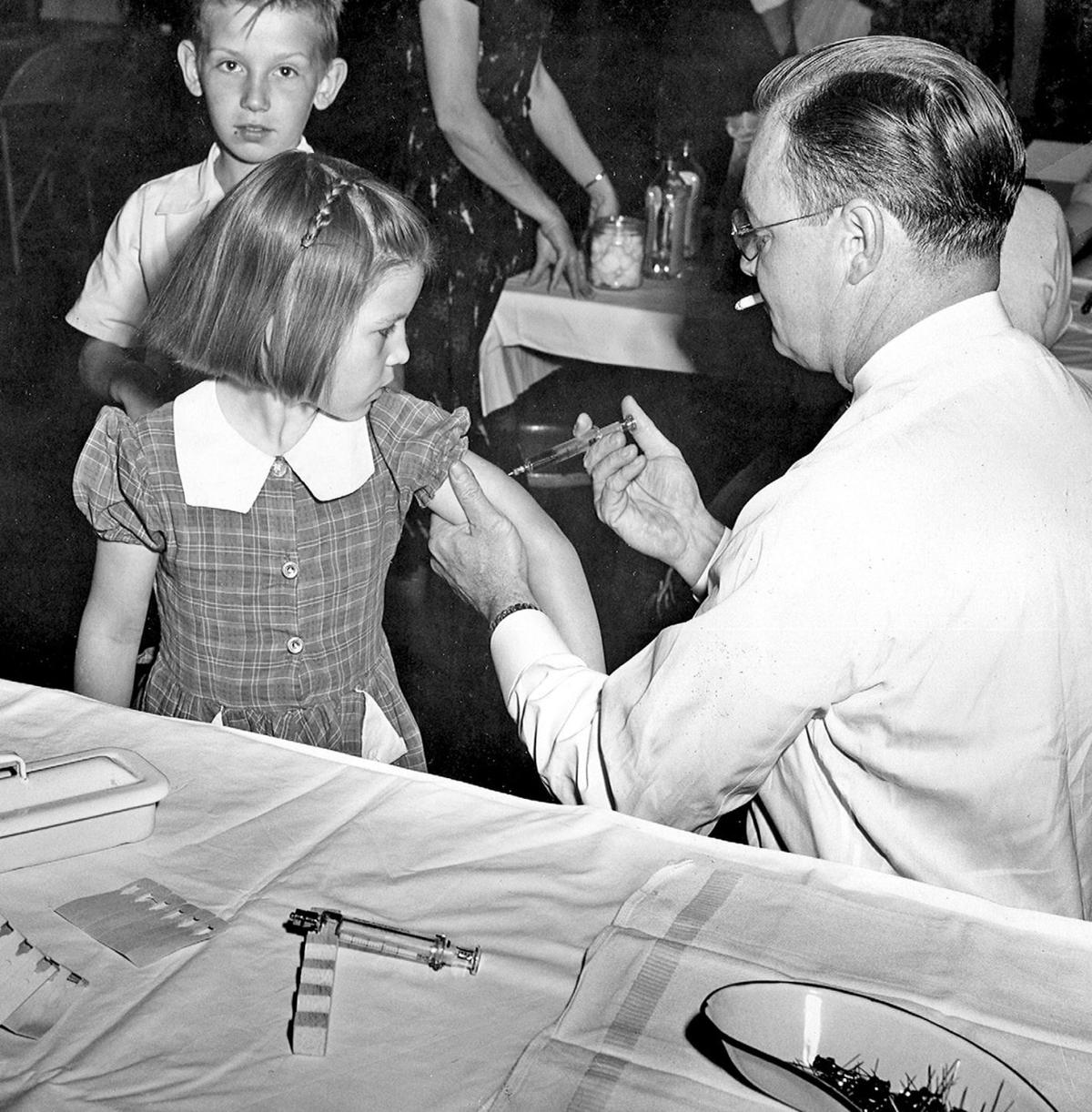 A girl receives a polio vaccine in Eau Claire in 1955. The polio vaccination effort in the 1950s and 1960s is well-remembered by David Barnes, an Eau Claire man who got both his polio and COVID-19 vaccinations at North High school, decades apart.

A girl receives a polio vaccine in Eau Claire in 1955. The polio vaccination effort in the 1950s and 1960s is well-remembered by David Barnes, an Eau Claire man who got both his polio and COVID-19 vaccinations at North High school, decades apart.

But nearly 60 years after Barnes got a polio vaccine at North High School as a young kid, he returned to North again — this time, as a retiree, for a COVID-19 vaccine.

“That was a little bit surreal,” Barnes said Wednesday, a week after receiving his second dose. “What goes around comes around for me.”

David, 70, and his wife, Gail Barnes, 69, both received their second doses of the COVID-19 vaccine on March 17 at a North High School clinic run by the Eau Claire City-County Health Department.

“We were thrilled,” David said. “I got the first shot the day after my 70th birthday, so it was kind of a great birthday present.”

North High School holds a rich history, both for David and Gail and as a public vaccination site.

Not only did David and Gail first meet at North in 1973 — David as a Spanish teacher, Gail teaching home economics — but David’s father, David P. Barnes, was North’s first principal when the polio vaccines came to Eau Claire, he said.

“I know that he was proud to have this event out there,” David said of his father.

Polio, a contagious disease caused by the poliovirus, can cause a range of symptoms. Most infected people are asymptomatic; others are paralyzed, and the disease can be life-threatening.

No cases of polio have originated in the U.S. since 1979.

It was in the fall of 1962 when an 11-year-old David lined up at North High School to get his oral polio vaccine.

David recalled children lining up at North High School to receive the oral vaccine, which nurses first dripped onto sugar cubes before administering.

“I remember a lot of people going through the cafeteria line, getting the sugar cube,” David said. “You put that sugar cube with the vaccine on it in your mouth and let it dissolve.

“A lot of people were out there,” he remembered. “It felt like the whole city.”

The oral polio vaccine was given out throughout the Chippewa Valley in the early 1960s.

Despite a massive vaccination effort in the later stages of the epidemic, the Chippewa Valley wasn’t untouched by polio. David recalled a female classmate who was partially paralyzed by the disease; the girl’s classmates and teachers carried her up and down the school building stairs to her classes.

“All persons over three months of age are urged to take the oral vaccine,” read an April 1963 story in the Leader-Telegram.

Each vaccine cost 25 cents, but “no one will be turned away for lack of funds,” the story noted.

“Polio vanishing but is not yet licked,” a December 1965 headline proclaimed.

Gail also remembers getting the polio vaccine in the small Nebraska town where she grew up.

In May 1955, Salk polio vaccines were being given out at what was then the Longfellow School in Eau Claire, according to Leader-Telegram archives.

That same month, the Salk vaccine was also approved for first- and second-graders in Trempealeau County.

Decades later, another mass vaccination effort is beginning in Eau Claire County and across the country.

Both David and Gail praised the COVID-19 vaccine process at North High School.

“I’m very happy about (the COVID-19 vaccine),” Gail said. “It opens things up a little bit. We know we still have to be pretty careful ... I still don’t mind wearing a mask, just in case.”