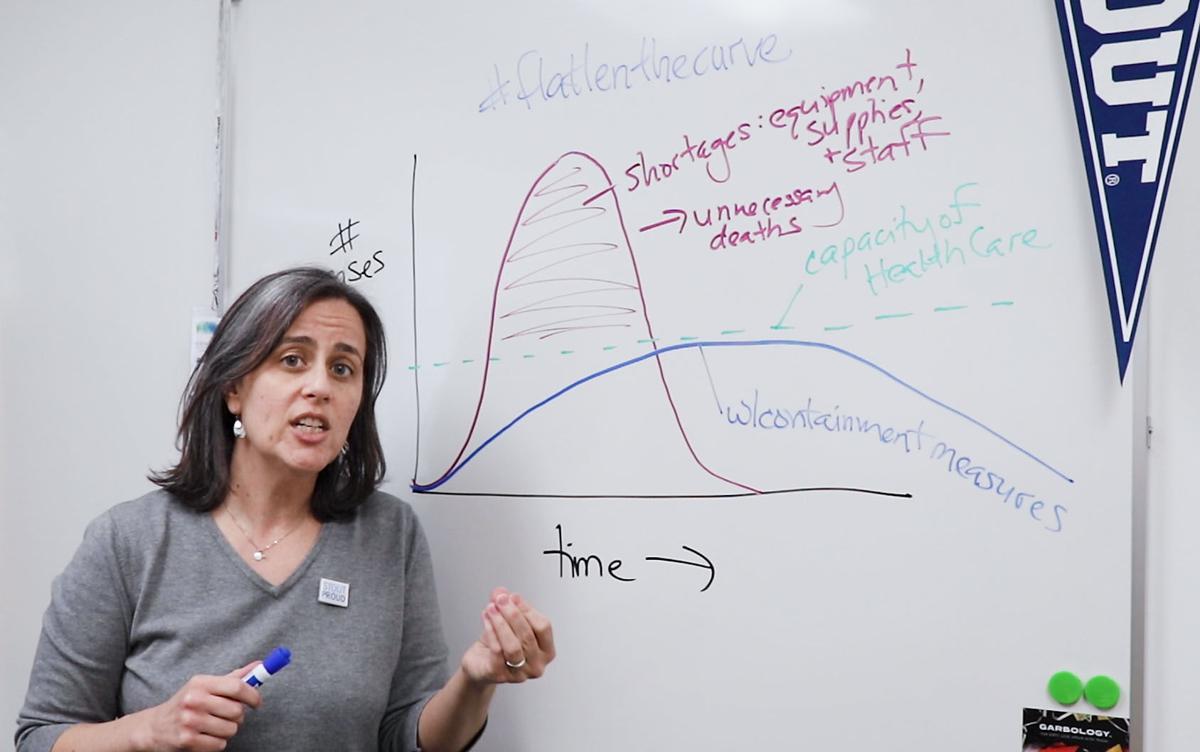 Dr. Alexandra Hall, a biology professor and Student Health Services physician at UW-Stout, discusses how to help "flatten the curve" in response to COVID-19. Her video on "flattening the curve" can be found at https://www.onfocus.news/uw-stout-professor-explains-flatten-the-curve/. 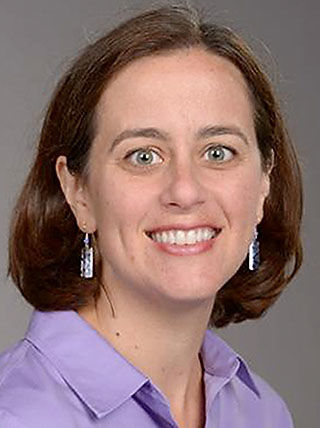 Dr. Alexandra Hall, a biology professor and Student Health Services physician at UW-Stout, discusses how to help "flatten the curve" in response to COVID-19. Her video on "flattening the curve" can be found at https://www.onfocus.news/uw-stout-professor-explains-flatten-the-curve/.

Dr. Alexandra Hall is featured in a recent video in which she describes “flattening the curve” to help health care systems better deal with COVID-19.

The video, available at https://www.onfocus.news/uw-stout-professor-explains-flatten-the-curve/, explains why extreme preventative measures have to be taken to slow the spread of the coronavirus and what individuals can do to assist in those efforts.

Hall is a biology professor and Student Health Services physician at UW-Stout, where she has worked since 2012. She spoke this week with the Leader-Telegram to discuss government responses to COVID-19 so far, misconceptions, the importance of soap and changing one’s mindset when social distancing. The interview has been edited and condensed.

How has the response from state and national governments compared to what you expected or hoped it might be?

That’s kind of a big question, and certainly I’m not a policy expert, I’m not a government expert, I’m not a public health expert. I’m a family doctor who teaches anatomy classes, for the most part. We had the benefit of seeing what happened in Hubei Province in China and we also had the benefit of seeing what happened in Italy and Europe and now in the remainder of Europe as well as in Iran, so we had some really good early warning signs that this could get really bad very quickly and yet we were slow to mobilize and to really do anything about that. So we lost our window of opportunity to contain the virus, to be able to quickly diagnose and isolate anybody who is infected and bringing it into the country.

So now it is widespread. Our efforts to then slow the spread of the virus have been hampered by the fact that we’ve had delays in the accessibility of testing and now we do have more widespread testing, but the numbers are severely limited so in Wisconsin we’re still not able to test everyone where we have a clinical suspicion that they might actually have the virus.

We’re stuck in this really difficult place of knowing this is a really contagious virus, knowing it’s probably 10 times more fatal than influenza, knowing that if we get large numbers of infected people it’s going to completely overwhelm the capacity of our health care system, and yet we don’t have a way to identify those people who have the virus and isolate them. So that’s why now we’re in this position of having to shut everything down … We don’t have the ability to distinguish right now between somebody who has a cold or some allergies or maybe influenza from somebody with COVID-19. We don’t have that ability to say who really needs to stay home and who is probably fine to be out and about, so we just have to say, “Everybody has to stay home.”

Is the lack of available testing the most pressing concern in the near future?

In terms of how we have responded to this crisis, that is the biggest mistake we have made. It really hamstrings us and it forces us to do social distancing, the working from home, the closing of restaurants and bars, and all of the economic fallout that happens because of these measures … If we had had freely available, readily accessible tests right from the get-go, we may never have had to do that, so that is mistake number one … Being able to do testing on a much wider scale is super important because it’s the only thing that’s going to allow us to return to a life that’s kind of normal.

The second major concern, of course, is sufficiency of medical supplies and equipment … The other concern is hospital beds and medical staff. How are we going to accommodate the increased number of patients that we’re going to see in some parts of our country? … You can maybe make more masks or maybe produce more ventilators, but you can’t make more doctors, you can’t make more nurses.

You mentioned we’re probably still in the early stages. Do you have a sense of where on the curve we are?

It’s so hard to know because we haven’t done enough testing to be able to know … The fact that our local hospitals aren’t yet inundated with people on ventilators with terrible viral pneumonia means that we’re not yet where Italy was a week or two ago, at least in our region. But we know that this virus is, to a pretty large extent, spread by people who have mild symptoms or even no symptoms.

The virus can live on hard surfaces for two or three days, is that correct?

Viral particles seem to be able to survive in the air for up to three hours, on cardboard for up to 24 hours on average and on plastic and stainless steel for 48 to 72 hours. So what that means is … wash your hands before and after touching things, use disinfectant wipes or soap and water to clean off commonly-touched surfaces, especially things that are typically touched by lots of different people, like doorknobs, elevator buttons.

Is it basically if you thoroughly soap your hands, you eliminate the virus?

You will kill it, yeah. Soap is even better than the alcohol hand sanitizers, so if you can get yourself to a sink with soap and water, especially if it’s a touchless sink, where you don’t have to turn off that water. That good handwashing for 20 seconds, really vigorous, thorough scrub with lots of nice, sudsy soap — that’s perfect. That’s beautiful, that’s the best thing that you can do, and it doesn’t have to be hot water.

Are there other misconceptions or common things that you’ve heard that you want to clarify?

The thing where I think we’re seeing a lot of difficulty is the standard advice that you’ll find on any website, including the Department of Health website is, “If you have symptoms consistent with COVID-19, call your health care provider.” That’s really tricky … A lot of people who get this infection are going to have mild symptoms. Right now, at this present moment, we don’t have the capacity to test people with mild symptoms, so as much as we would like to identify who they are so we can impress upon them how important it is that they isolate and not be out and about at all, we just simply don’t have the capacity to test and diagnose those people.

We need to maybe get a little bit more nuanced in this unique time that we’re in, where we don’t have the capacity to test everyone that we would like to test, and if your symptoms are relatively mild and you’re breathing OK, you should probably just stay at home and self-isolate ... There’s nothing that you can take that’s been demonstrated to help you get better sooner. Our treatments are just for people who get severely ill and we have to breathe for them and support their blood pressure for them or give them oxygen … If you have mild symptoms, then, you need to rest, drink plenty of fluids, use acetaminophen (Tylenol) as needed for fever and pain, and isolate yourself from other people.

Say a person has the virus, they get infected and they recover. Can they never get it again?

It’s a little too early to know ... So far, very, very preliminary data looks as though you will get some immunity to it. If you have had it, then you will hopefully likely be immune to it in the future.

Even if you do develop lasting immunity, we don’t know how much it’s going to change over time … If all of our social distancing measures are successful, then we might have 80% or more of the population that has never been infected. That would be great, because then we wouldn’t have all of the deaths that would come along with that, and the overwhelming of our health care system, but it would mean that 80% of the population is still vulnerable to getting infected if it comes around again. This is a brand new virus for humans, so there was nobody anywhere in December had any immunity whatsoever to this virus, which is why it’s being so devastating.

How can people not panic?

For one, let’s just acknowledge that it’s hard, that we have never had anything like this happen in our lifetimes … I think it’s important to think about our mindset, and the reason why you’re staying home or working from home and limiting trips out and not going to bars — to shift your mindset from, “so that I don’t get infected” to “so that I protect my community.”

We’re all working together to slow down this virus so that our medical systems can keep up with it, so that our health care systems can treat the people who get ill in order to maximize their outcomes, to be able to minimize any unnecessary suffering or deaths … If we think about it as everybody pitching in to do their part for the good of the community and the health of the community, sometimes changing that shift in focus can be really helpful. It is scary, but if we focus on the things we can do — we can stay home, we can practice good handwashing, we can absolutely stay away from other people if we are sick, and follow the advice that we’re getting from our public health officials and medical professionals, then that’s going to give us the best outcome.