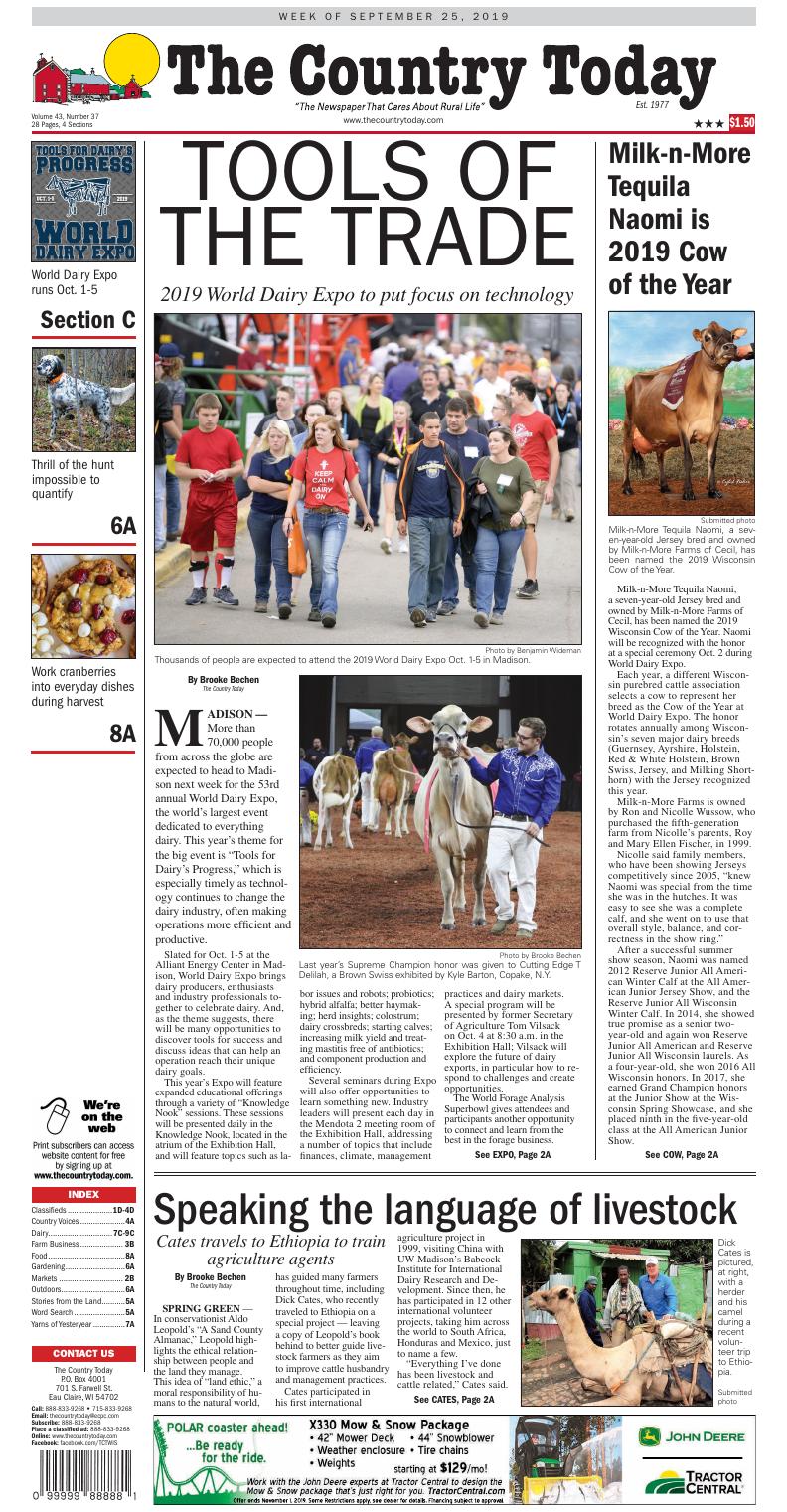 Thousands of people are expected to attend the 2019 World Dairy Expo Oct. 1-5 in Madison.

MADISON — More than 70,000 people from across the globe are expected to head to Madison next week for the 53rd annual World Dairy Expo, the world’s largest event dedicated to everything dairy. This year’s theme for the big event is “Tools for Dairy’s Progress,” which is especially timely as technology continues to change the dairy industry, often making operations more efficient and productive.

Slated for Oct. 1-5 at the Alliant Energy Center in Madison, World Dairy Expo brings dairy producers, enthusiasts and industry professionals together to celebrate dairy. And, as the theme suggests, there will be many opportunities to discover tools for success and discuss ideas that can help an operation reach their unique dairy goals.

This year’s Expo will feature expanded educational offerings through a variety of “Knowledge Nook” sessions. These sessions will be presented daily in the Knowledge Nook, located in the atrium of the Exhibition Hall, and will feature topics such as labor issues and robots; probiotics; hybrid alfalfa; better haymaking; herd insights; colostrum; dairy crossbreds; starting calves; increasing milk yield and treating mastitis free of antibiotics; and component production and efficiency.

Several seminars during Expo will also offer opportunities to learn something new. Industry leaders will present each day in the Mendota 2 meeting room of the Exhibition Hall, addressing a number of topics that include finances, climate, management practices and dairy markets. A special program will be presented by former Secretary of Agriculture Tom Vilsack on Oct. 4 at 8:30 a.m. in the Exhibition Hall; Vilsack will explore the future of dairy exports, in particular how to respond to challenges and create opportunities.

The World Forage Analysis Superbowl gives attendees and participants another opportunity to connect and learn from the best in the forage business.

For the past 36 years, the World Forage Analysis Superbowl has been held in conjunction with World Dairy Expo, allowing dairy producers looking to improve forage management the chance to review winning samples and rub shoulders with the best in the industry. An impressive $26,000 in cash prizes will be awarded to winners in this year’s Superbowl contest, with winners announced on Oct. 2 at 11 a.m. during a special forage-focused luncheon.

Attendees who are curious about other dairy operations across the country can take virtual farm tours of eight dairy operations in North America. Tours are offered each day in Mendota Room 1 of the Exhibition Hall. Tours are led by the farm’s owner or manager and highlight genetics, technology, community engagement, environmental stewardship and cow comfort, all while also representing a wide variety of sizes, locations and breeds. Questions and open discussion are encouraged during these unique peeks into the lives of other dairy operators.

After several days of breed shows, the best of the best of World Dairy Expo will be on display Oct. 5, the final day of Expo, with the Parade of Champions and Selection of the 2019 Supreme Champion. This event begins at 4 p.m in the coliseum.

Along with the naming of the Supreme Champion, judges will also announce the winner of the 2019 Supreme Champion Heifer. Introduced last year, this award recognizes the top animal from among the Junior Champions of the seven breed shows held throughout the week and is given in memory of W. Terry Howard, a UW-Madison dairy scientist whose volunteerism at World Dairy Expo spanned nearly four decades.

Although Cates didn’t do many "touristy" things, he did get to visit the Kombolcha Livestock Market, which was much different than livestock auctions in the U.S.

Cates is pictured with the nearly 30 people he helped train at Kombolcha Agricultural, Technical and Vocational Education and Training College. Before leaving, they presented him with a special white holiday outfit adorned with the colors of Ethiopia.

Students in Cates’ class used the college’s farm for hands-on learning experiences, including how to use a pasture stick and plate to determine forage yield.

Dick Cates is pictured, at right, with a herder and his camel during a recent volunteer trip to Ethiopia.

SPRING GREEN — In conservationist Aldo Leopold’s “A Sand County Almanac,” Leopold highlights the ethical relationship between people and the land they manage. This idea of “land ethic,” a moral responsibility of humans to the natural world, has guided many farmers throughout time, including Dick Cates, who recently traveled to Ethiopia on a special project — leaving a copy of Leopold’s book behind to better guide livestock farmers as they aim to improve cattle husbandry and management practices.

“Everything I’ve done has been livestock and cattle related,” Cates said. “But most projects have had an emphasis on managing the land.”

In mid-August of this year, Cates left his Iowa County farm again and ventured to Ethiopia with Catholic Relief Services’ Farmer-to-Farmer Program, a USAID funded program that provides technical assistance from U.S. volunteers to farmers, farmer groups, agribusinesses and other agricultural institutions abroad.

This trip to Ethiopia was a bit different than other volunteer projects though, he explained. Instead of visiting farms and sharing information directly with farmers, this project focused on training development agents at Kombolcha Agricultural, Technical and Vocational Education and Training College, sharing with them information and resources that they, in turn, can share with farmers in the region.

Much like Extension agents in Wisconsin, development agents support a large base of small farmers in the Ethiopian agricultural sector; however, these farmers experience a limited flow of agricultural knowledge, skills, technology and techniques, solidifying the need for more well-trained development agents who are willing to advise on practices and management.

“Ethiopia is a developing country. In the last 10 years, they’ve started to really improve their lifestyle; they’re very industrious people,” Cates said. “It’s a great thing for their agricultural community to have CRS come.”

Cates created a curriculum for the trainers and instructors at the college, about 30 people total. Over 15 days, he taught them many things, including how to use and calibrate a pasture stick and plate and how to use a ration balancing software so farmers can better understand what they are feeding their animals and in return, see better production and productivity for the animal.

“It was so interesting because they began to realize they could feed what the animals need for nutrition instead of just what they have on hand,” Cates said. “They were totally into it because they could see how it was useful.”

Agriculture in Ethiopia is much different than agriculture in the U.S. The average acreage of a farm in Ethiopia is just over one acre, with almost everyone having a few cows, and maybe some sheep, oxen or a camel. The country has a large livestock population, the highest in Africa and ranking tenth in the world. However, livestock’s contribution to the country’s GDP remains low due to inadequate feed supply, prevalence of diseases and traditional, and often backward, animal husbandry practices, specifically in rural areas.

Ethiopia is also the second most populous country in Africa, but interestingly, 85% of the population is still considered rural and make a living farming.

“It’s very, very agriculture cultured, but the land isn’t very productive and there are just too many people,” Cates said.

Even with small acreage, he stressed how progress can still be made. Grass is free, he said, and utilizing that resource should be a consideration for these farmers.

While tourist opportunities were far and few between, Cates did get to experience something interesting while in Ethiopia: a livestock exchange. In the U.S., the scenes at livestock auctions include big cattle trailers and trucks in the parking lot, gates and fences protecting the animals and attendees and an arena to showcase the next animal up for auction.

“There was none of that,” Cates said.

Instead, everyone that had animals to sell walked them from their farms, some six to 10 miles away, to an open field on Saturday. Hundreds of people stood with their animals, leaning on their walking sticks and occasionally tapping their animal on the nose or rear-end if it got antsy.

“If someone wants to buy something, you just go to the person with the animal and barter,” he said. “And then you walk home with the livestock that you purchased.”

Cates also found Ethiopia a melting pot of different religions and races, and it was interesting to observe their daily routines. He also found it interesting how people interacted with each other in the village each day and was curious about their industrious and innovative ideas.

“I really love being in other countries for a limited time, and I’m fascinated by how people solve their problems and choose to live,” Cates said. “It seemed like every 10 yards, I’d get a chuckle out of something or think to myself ‘that’s amazing.’ Everything is just so different.”

Though certainly an adventure and learning opportunity, Cates is always glad to be back home as he misses his family while he’s volunteering abroad. However, he takes pride knowing he’s left knowledge behind in Ethiopia that will hopefully help farmers better manage their livestock and their land.

“Now it’s up to them,” he said. “They may not use anything I taught them, but one agent may help a lot of farmers and to me, that’s really cool.” 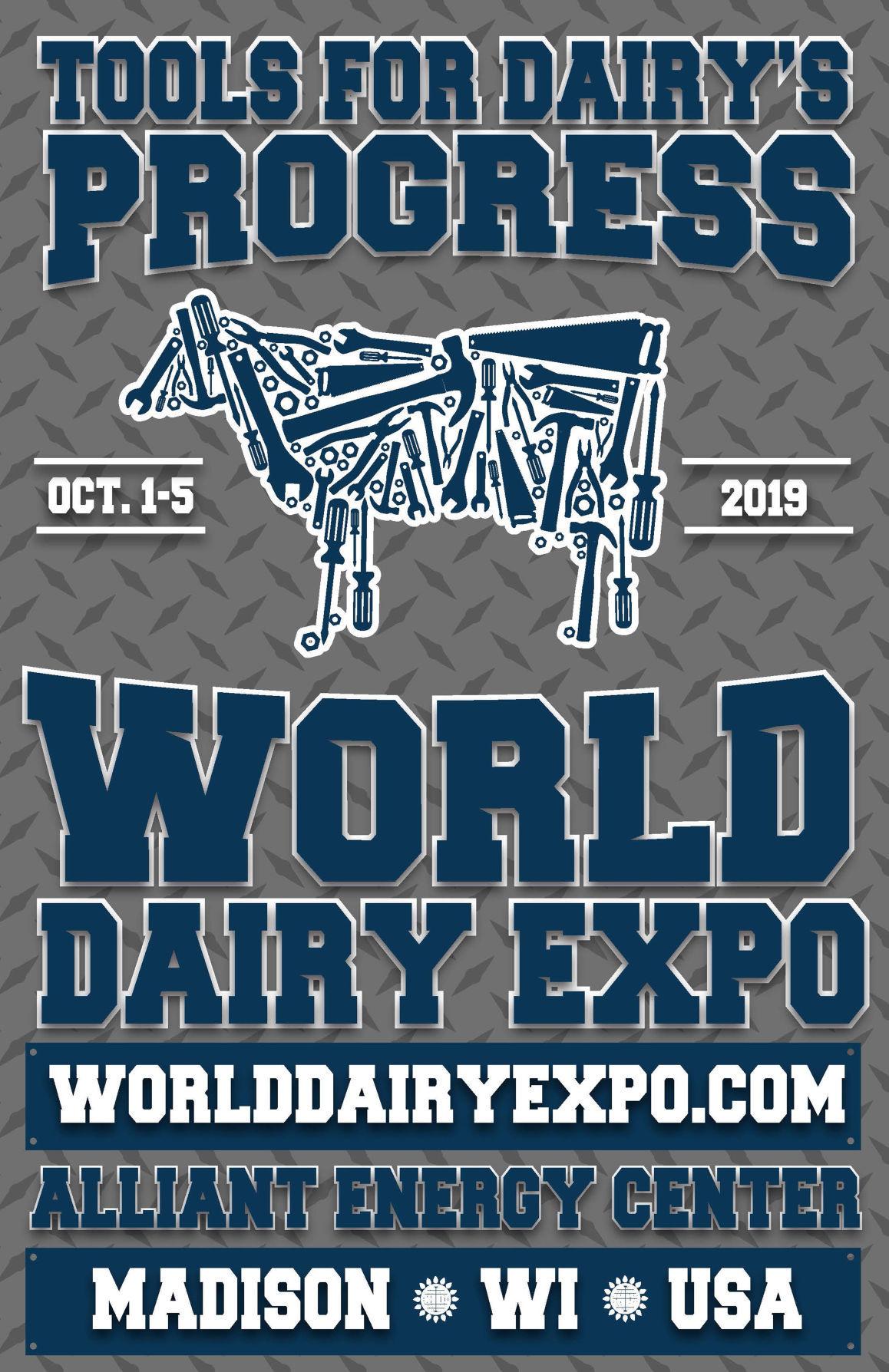 Milk-n-More Tequila Naomi, a seven-year-old Jersey bred and owned by Milk-n-More Farms of Cecil, has been named the 2019 Wisconsin Cow of the Year.

Milk-n-More Tequila Naomi, a seven-year-old Jersey bred and owned by Milk-n-More Farms of Cecil, has been named the 2019 Wisconsin Cow of the Year. Naomi will be recognized with the honor at a special ceremony Oct. 2 during World Dairy Expo.

Each year, a different Wisconsin purebred cattle association selects a cow to represent her breed as the Cow of the Year at World Dairy Expo. The honor rotates annually among Wisconsin’s seven major dairy breeds (Guernsey, Ayrshire, Holstein, Red & White Holstein, Brown Swiss, Jersey, and Milking Shorthorn) with the Jersey recognized this year.

Milk-n-More Farms is owned by Ron and Nicolle Wussow, who purchased the fifth-generation farm from Nicolle’s parents, Roy and Mary Ellen Fischer, in 1999.

Nicolle said family members, who have been showing Jerseys competitively since 2005, “knew Naomi was special from the time she was in the hutches. It was easy to see she was a complete calf, and she went on to use that overall style, balance, and correctness in the show ring.”

Nicolle said Naomi has been a blessing to the family throughout the years.

“She was one of our children’s favorite 4-H project animals with her sweet disposition and seeming love to compete at the shows,” she said.

The Cow of the Year ceremony is organized annually by the Wisconsin Department of Agriculture, Trade and Consumer Protection. The 2019 ceremony will be held at approximately 9:30 to 10 a.m., Wednesday, Oct. 2 during the International Jersey Show. The award will be presented to the family by DATCP Secretary Brad Pfaff and 72nd Alice in Dairyland Abigail Martin. 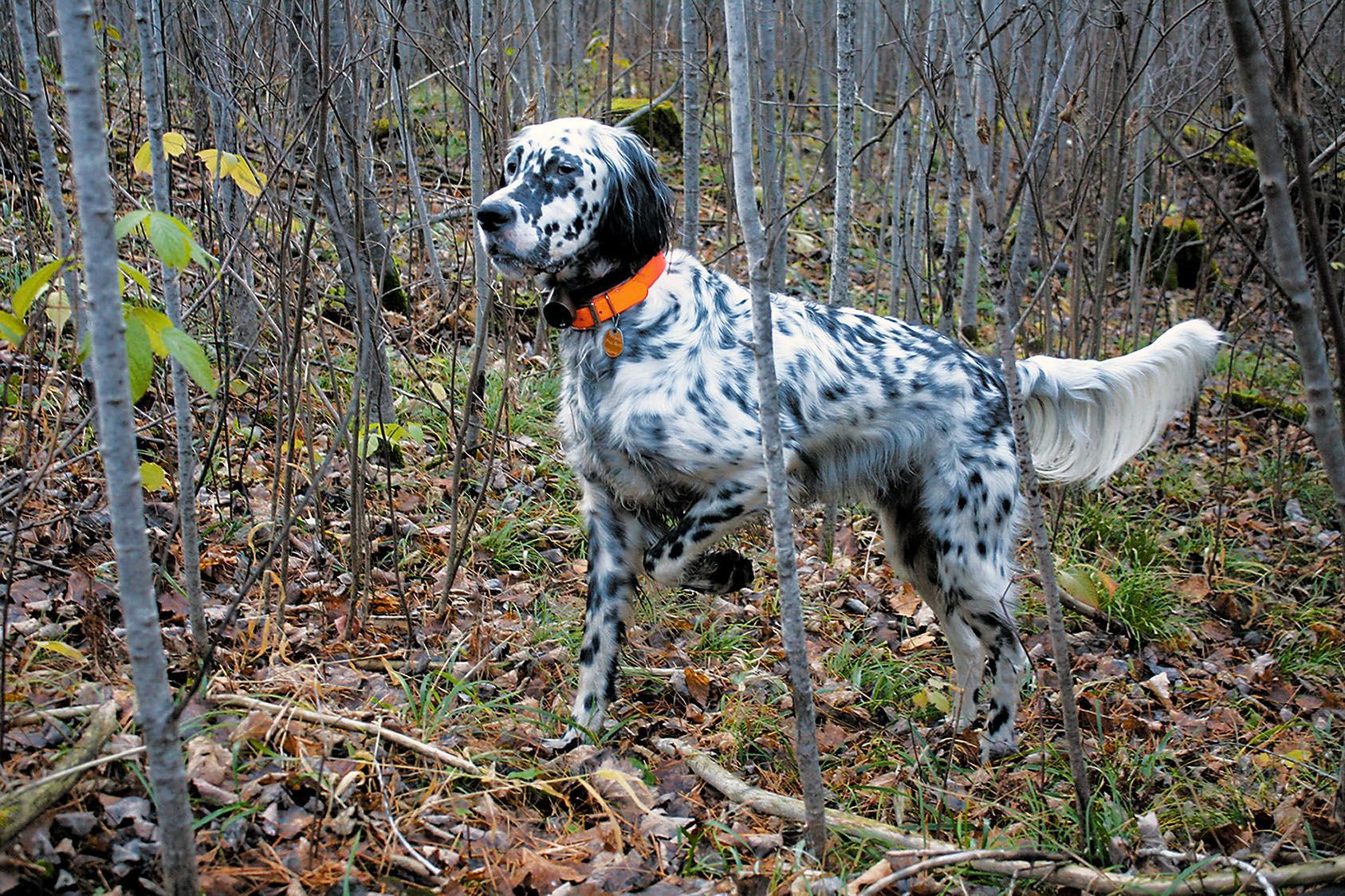 Dogs can’t count, so every hunting season is a great season for them. 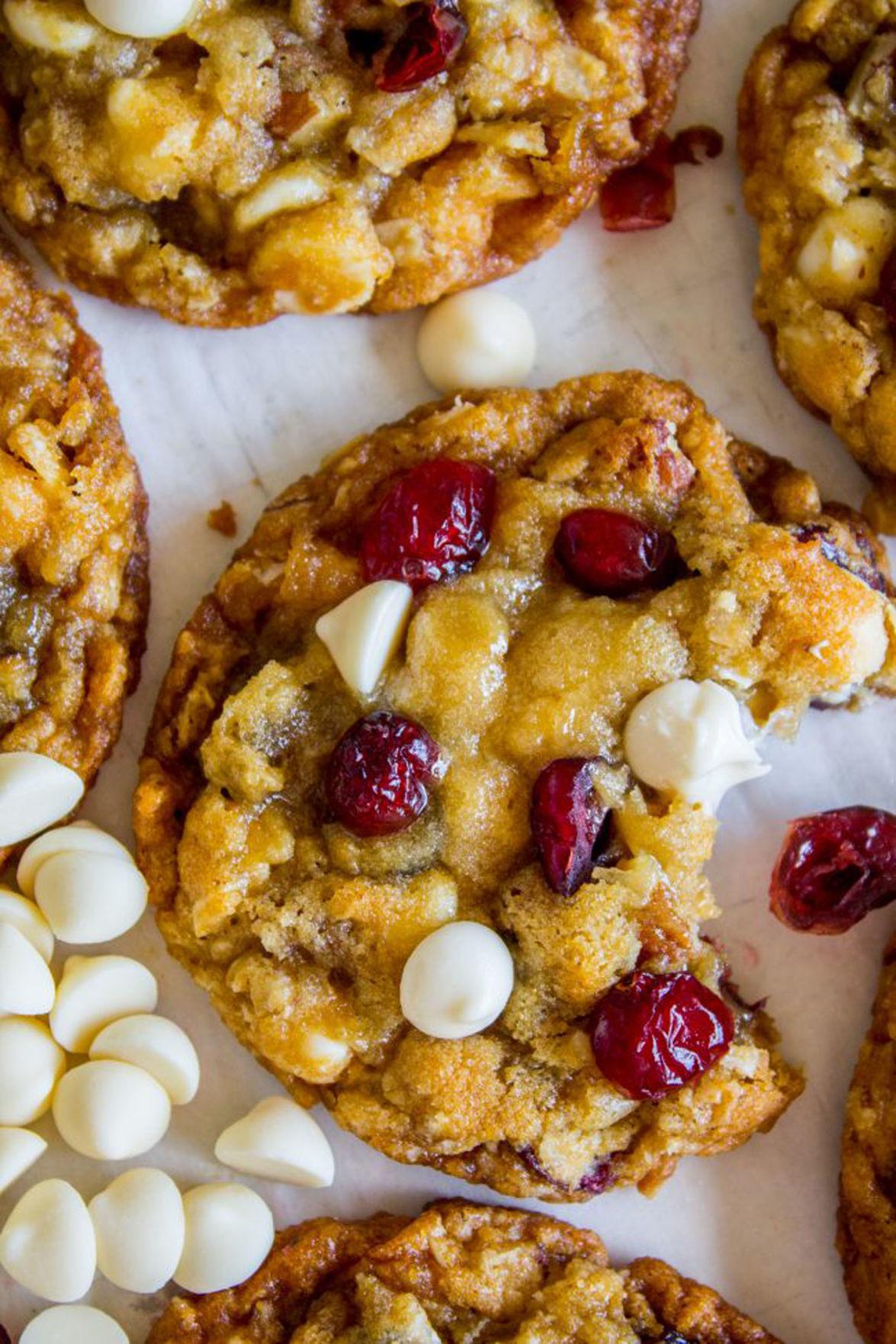 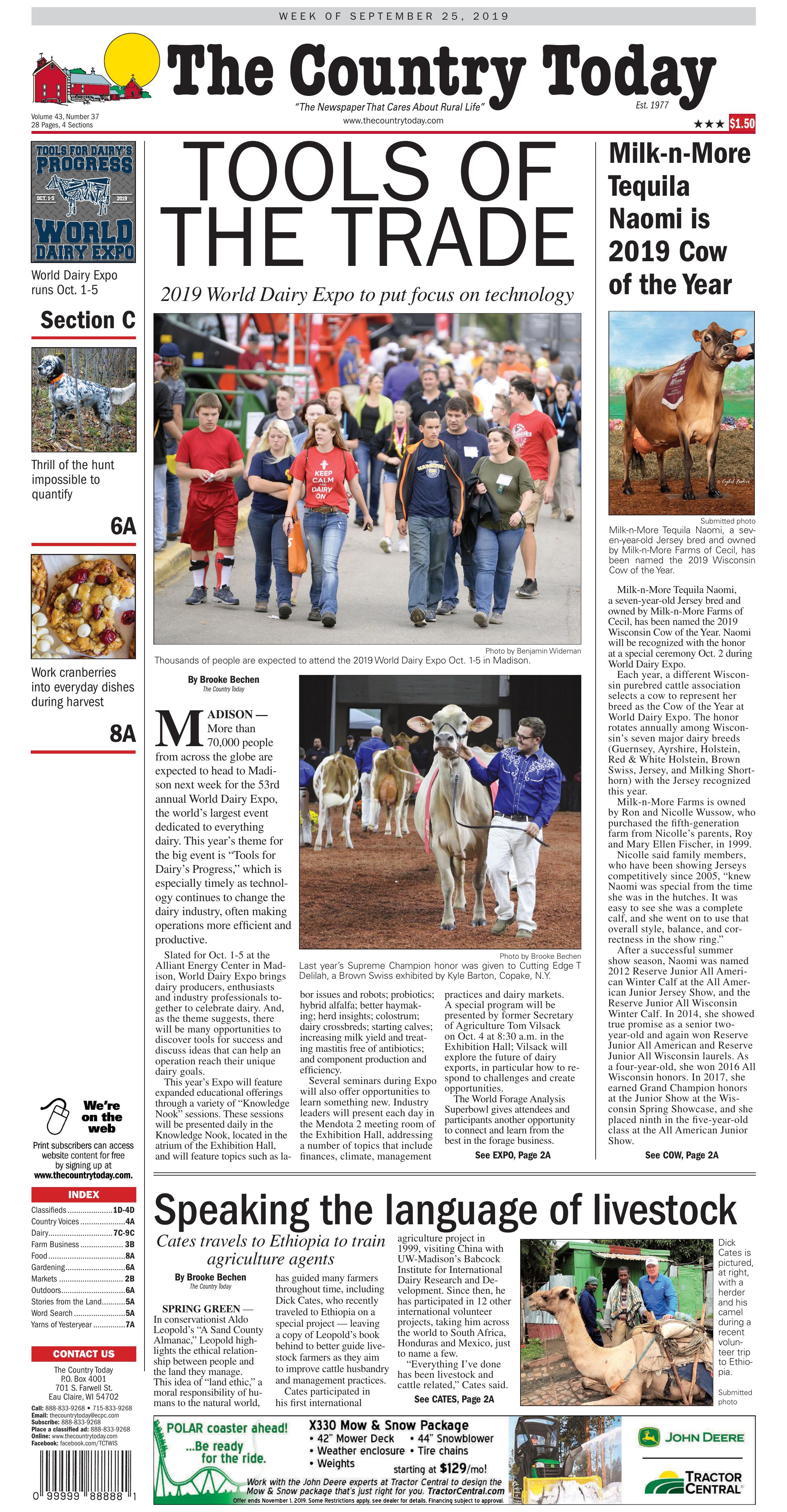