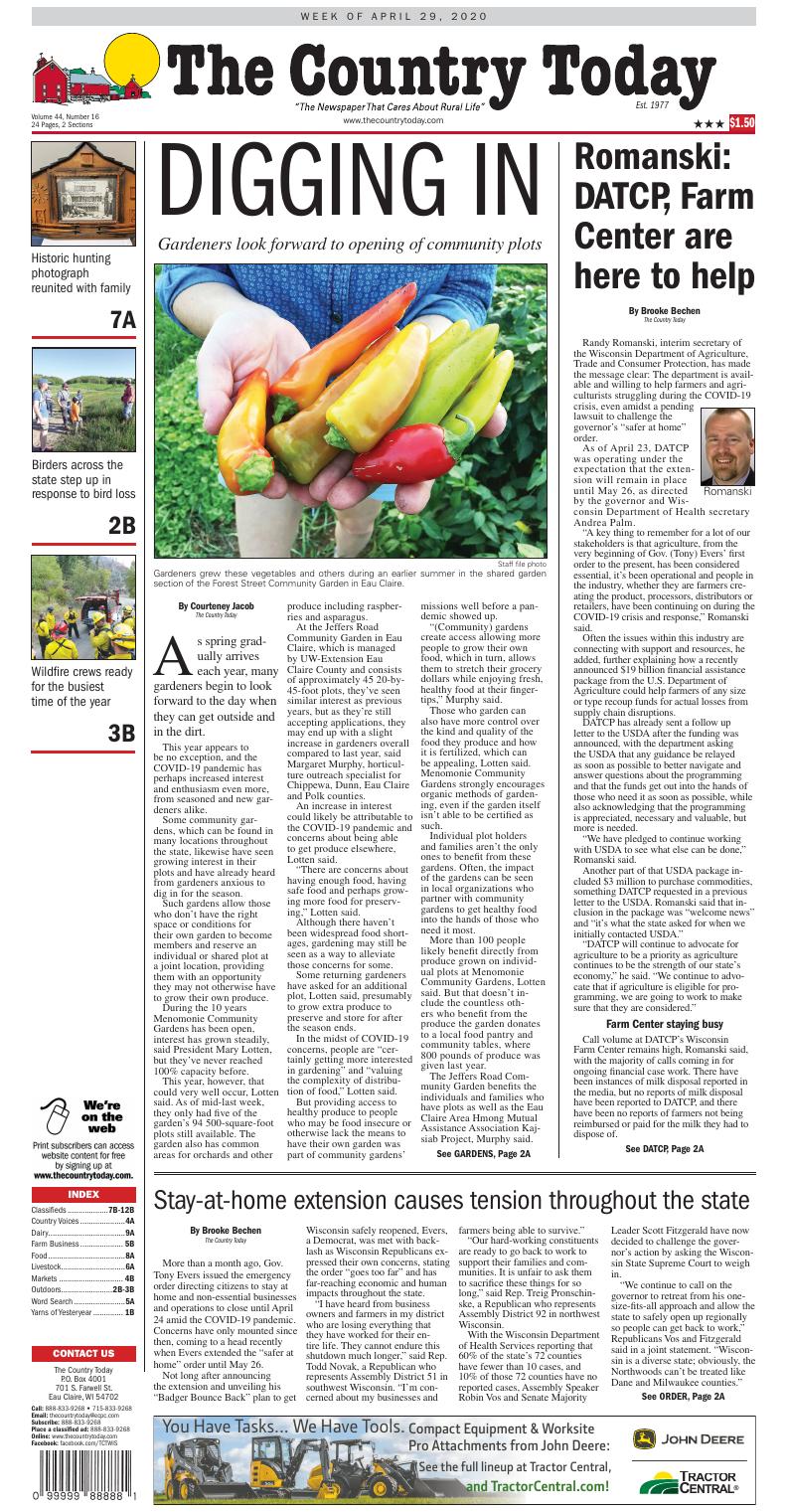 Gardeners grew these vegetables and others during an earlier summer in the shared garden section of the Forest Street Community Garden in Eau Claire.

As spring gradually arrives each year, many gardeners begin to look forward to the day when they can get outside and in the dirt.

This year appears to be no exception, and the COVID-19 pandemic has perhaps increased interest and enthusiasm even more, from seasoned and new gardeners alike.

Some community gardens, which can be found in many locations throughout the state, likewise have seen growing interest in their plots and have already heard from gardeners anxious to dig in for the season.

Such gardens allow those who don’t have the right space or conditions for their own garden to become members and reserve an individual or shared plot at a joint location, providing them with an opportunity they may not otherwise have to grow their own produce.

During the 10 years Menomonie Community Gardens has been open, interest has grown steadily, said President Mary Lotten, but they’ve never reached 100% capacity before.

This year, however, that could very well occur, Lotten said. As of mid-last week, they only had five of the garden’s 94 500-square-foot plots still available. The garden also has common areas for orchards and other produce including raspberries and asparagus.

At the Jeffers Road Community Garden in Eau Claire, which is managed by UW-Extension Eau Claire County and consists of approximately 45 20-by-45-foot plots, they’ve seen similar interest as previous years, but as they’re still accepting applications, they may end up with a slight increase in gardeners overall compared to last year, said Margaret Murphy, horticulture outreach specialist for Chippewa, Dunn, Eau Claire and Polk counties.

An increase in interest could likely be attributable to the COVID-19 pandemic and concerns about being able to get produce elsewhere, Lotten said.

“There are concerns about having enough food, having safe food and perhaps growing more food for preserving,” Lotten said.

Although there haven’t been widespread food shortages, gardening may still be seen as a way to alleviate those concerns for some.

Some returning gardeners have asked for an additional plot, Lotten said, presumably to grow extra produce to preserve and store for after the season ends.

In the midst of COVID-19 concerns, people are “certainly getting more interested in gardening” and “valuing the complexity of distribution of food,” Lotten said.

But providing access to healthy produce to people who may be food insecure or otherwise lack the means to have their own garden was part of community gardens’ missions well before a pandemic showed up.

“(Community) gardens create access allowing more people to grow their own food, which in turn, allows them to stretch their grocery dollars while enjoying fresh, healthy food at their fingertips,” Murphy said.

Those who garden can also have more control over the kind and quality of the food they produce and how it is fertilized, which can be appealing, Lotten said. Menomonie Community Gardens strongly encourages organic methods of gardening, even if the garden itself isn’t able to be certified as such.

Individual plot holders and families aren’t the only ones to benefit from these gardens. Often, the impact of the gardens can be seen in local organizations who partner with community gardens to get healthy food into the hands of those who need it most.

More than 100 people likely benefit directly from produce grown on individual plots at Menomonie Community Gardens, Lotten said. But that doesn’t include the countless others who benefit from the produce the garden donates to a local food pantry and community tables, where 800 pounds of produce was given last year.

While the community gardens are allowed to continuing fulfilling their missions as gardening has been categorized an essential activity, social distancing guidelines will still need to be followed on the properties.

UW-Extension is “currently working with state partners, staff and community partners in putting together guidance that provides best practices and recommendations for garden coordinators and gardeners to support the safe operation of community gardens,” Murphy said.

Among the adjustments being made at Menomonie Community Gardens is the suspension of regular meetings for the gardeners, Lotten said.

But even with the adjustments having to be made, community gardeners will still be able to reap many of the same benefits they normally would during the season, Lotten said, not only in terms of produce, but also in exercise, sunshine and a way to bring balance to a gardener’s life.

Jared Johnson of Minnesota fishes off his kayak Saturday near the Red Cedar State Trail just west of Menomonie as a friend photographs him while remaining at least 6 feet apart, as mandated by Wisconsin’s safer-at-home order.

More than a month ago, Gov.Tony Evers issued the emergency order directing citizens to stay at home and non-essential businesses and operations to close until April 24 amid the COVID-19 pandemic. Concerns have only mounted since then, coming to a head recently when Evers extended the “safer at home” order until May 26.

Not long after announcing the extension and unveiling his “Badger Bounce Back” plan to get Wisconsin safely reopened, Evers, a Democrat, was met with backlash as Wisconsin Republicans expressed their own concerns, stating the order “goes too far” and has far-reaching economic and human impacts throughout the state.

“I have heard from business owners and farmers in my district who are losing everything that they have worked for their entire life. They cannot endure this shutdown much longer,” said Rep. Todd Novak, a Republican who represents Assembly District 51 in southwest Wisconsin. “I’m concerned about my businesses and farmers being able to survive.”

“Our hard-working constituents are ready to go back to work to support their families and communities. It is unfair to ask them to sacrifice these things for so long,” said Rep. Treig Pronschinske, a Republican who represents Assembly District 92 in northwest Wisconsin.

With the Wisconsin Department of Health Services reporting that 60% of the state’s 72 counties have fewer than 10 cases, and 10% of those 72 counties have no reported cases, Assembly Speaker Robin Vos and Senate Majority Leader Scott Fitzgerald have now decided to challenge the governor’s action by asking the Wisconsin State Supreme Court to weigh in.

“We continue to call on the governor to retreat from his one-size-fits-all approach and allow the state to safely open up regionally so people can get back to work,” Republicans Vos and Fitzgerald said in a joint statement. “Wisconsin is a diverse state; obviously, the Northwoods can’t be treated like Dane and Milwaukee counties.”

Farmers, who are no stranger to uncertainty, especially over the past several years, have expressed their frustrations with the stay-at-home order extension as well.

For Joe Bragger, president of the Wisconsin Farm Bureau Federation and a dairy farmer in Buffalo County, most farmers understand the logic of herd immunity and the dangers of disease spread when something enters a herd that does not have a vaccine.

“Taking proactive measures to keep livestock healthy and following biosecurity protocol on the farm is nothing new,” he said. “But at the same time, as a farmer, I am no stranger to the pain the agricultural community is feeling as a result of this pandemic.

“Farmers are incredible people. Even while they face some of the most challenging times in recent memory, they are not afraid to step up and help people in need. Continue to support each other, because together is the only way we will get through this.”

Bob Uphoff, a pork producer in south central Wisconsin, said they’ve had zero sales of pork products since the first week of March because of the closure of restaurants. He had spoken to his distributors last week, and had hoped to have a possible production run on April 27.

“Once the governor extended the closure of restaurants, we were back to no orders,” he said. “With the closure of major packing facilities in the Midwest, we are unable to get any hogs moved until sometime in May.”

The Wisconsin Dairy Alliance, along with 18 other Wisconsin trade associations and 33 Wisconsin Chambers of Commerce, signed a letter to the governor in early April, urging him to begin the process of reopening the state on April 24, when the “safer at home” order was originally set to expire.

“This was the last scenario dairy farmers anticipated,” the Wisconsin Dairy Alliance said in a news release. “Prompt action is critical to save this essential industry.”

Randy Romanski, interim secretary of the Wisconsin Department of Agriculture, Trade and Consumer Protection, has made the message clear: The department is available and willing to help farmers and agriculturists struggling during the COVID-19 crisis, even amidst a pending lawsuit to challenge the governor’s “safer at home” order.

As of April 23, DATCP was operating under the expectation that the extension will remain in place until May 26, as directed by the governor and Wisconsin Department of Health secretary Andrea Palm.

“A key thing to remember for a lot of our stakeholders is that agriculture, from the very beginning of Gov. (Tony) Evers’ first order to the present, has been considered essential, it’s been operational and people in the industry, whether they are farmers creating the product, processors, distributors or retailers, have been continuing on during the COVID-19 crisis and response,” Romanski said.

Often the issues within this industry are connecting with support and resources, he added, further explaining how a recently announced $19 billion financial assistance package from the U.S. Department of Agriculture could help farmers of any size or type recoup funds for actual losses from supply chain disruptions.

DATCP has already sent a follow up letter to the USDA after the funding was announced, with the department asking the USDA that any guidance be relayed as soon as possible to better navigate and answer questions about the programming and that the funds get out into the hands of those who need it as soon as possible, while also acknowledging that the programming is appreciated, necessary and valuable, but more is needed.

“We have pledged to continue working with USDA to see what else can be done,” Romanski said.

Another part of that USDA package included $3 million to purchase commodities, something DATCP requested in a previous letter to the USDA. Romanski said that inclusion in the package was “welcome news” and “it’s what the state asked for when we initially contacted USDA.”

Through the Farm Center, farmers and their families are eligible to obtain counseling vouchers that cover one hour of professional counseling at no cost through a program funded by DATCP. Mental health voucher requests are at an all time high for this time of year, with this past March recording the highest number of vouchers issued in one month since the beginning of the voucher program.

Romanski said that in all of 2018, there were 89 requests for vouchers; ninety-two requests have been made since the beginning of 2020, with more anticipated to filter through the Farm Center in the weeks and months to come.

“To the extent that you are able, please continue to make farmers and others aware of the availability of the Farm Center hotline number just to make sure people have a resource to go to if they have questions, comments or concerns. Our staff is available and will do the best they can to help,” he said.

The Wisconsin Farm Center can be reached toll-free at 1-800-942-2474 or by email at farmcenter@wisconsin.gov. Questions about the mental health voucher program can also be answered by contacting the Farm Center. 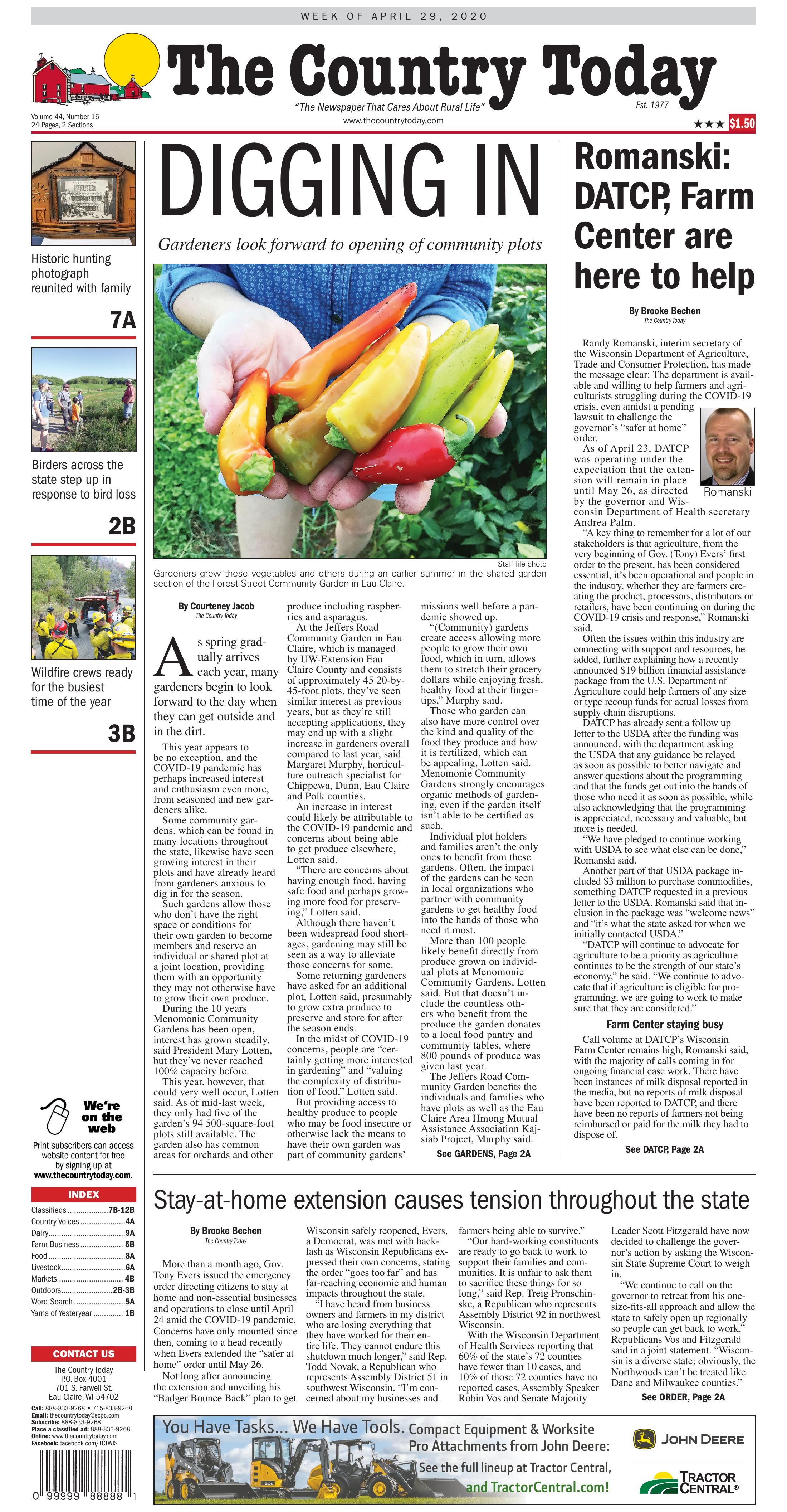