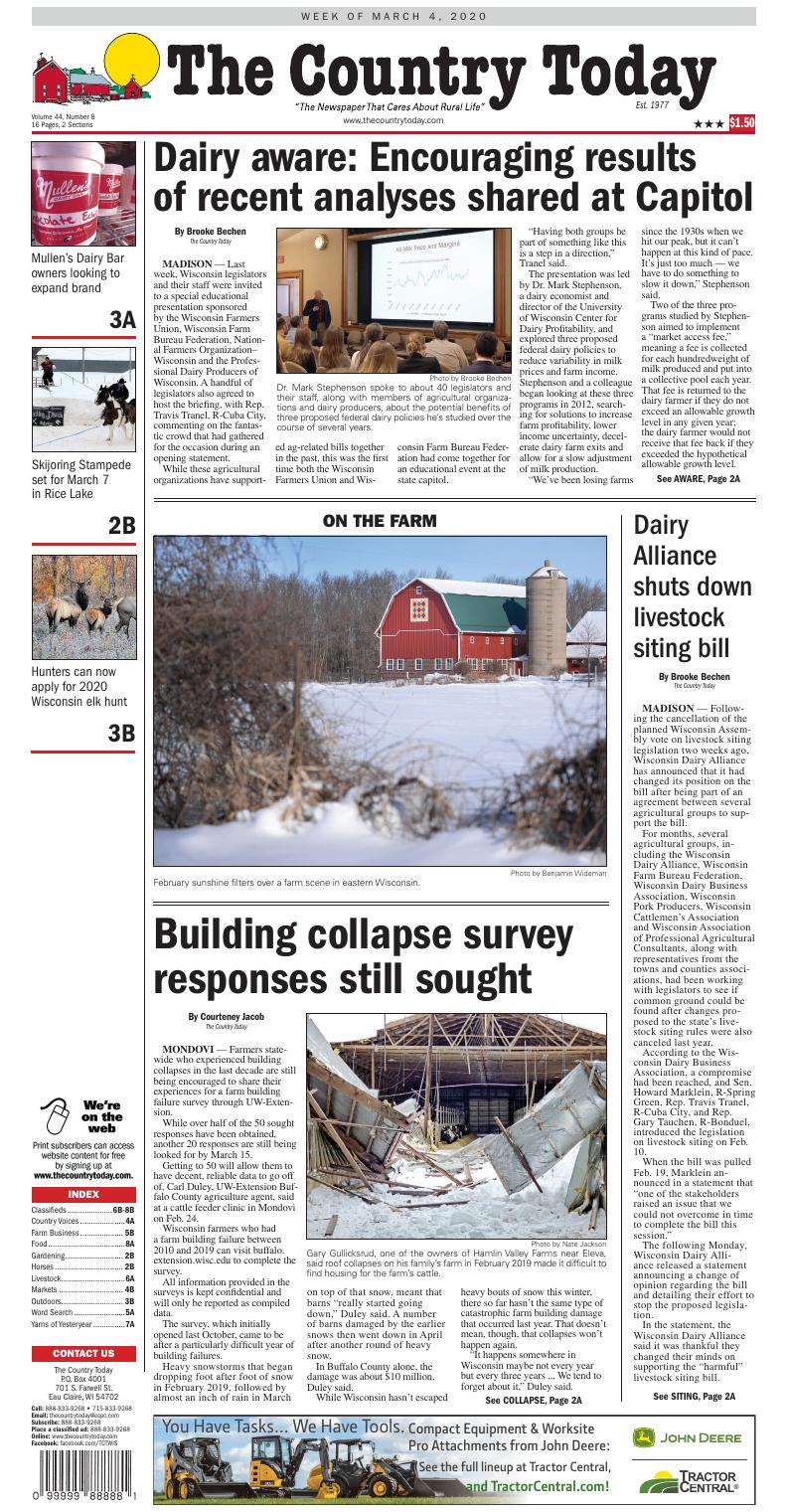 Dr. Mark Stephenson spoke to about 40 legislators and their staff, along with members of agricultural organizations and dairy producers, about the potential benefits of three proposed federal dairy policies he’s studied over the course of several years.

MADISON — Last week, Wisconsin legislators and their staff were invited to a special educational presentation sponsored by the Wisconsin Farmers Union, Wisconsin Farm Bureau Federation, National Farmers Organization–Wisconsin and the Professional Dairy Producers of Wisconsin. A handful of legislators also agreed to host the briefing, with Rep. Travis Tranel, R-Cuba City, commenting on the fantastic crowd that had gathered for the occasion during an opening statement.

While these agricultural organizations have supported ag-related bills together in the past, this was the first time both the Wisconsin Farmers Union and Wisconsin Farm Bureau Federation had come together for an educational event at the state capitol.

“Having both groups be part of something like this is a step in a direction,” Tranel said.

The presentation was led by Dr. Mark Stephenson, a dairy economist and director of the University of Wisconsin Center for Dairy Profitability, and explored three proposed federal dairy policies to reduce variability in milk prices and farm income. Stephenson and a colleague began looking at these three programs in 2012, searching for solutions to increase farm profitability, lower income uncertainty, decelerate dairy farm exits and allow for a slow adjustment of milk production.

“We’ve been losing farms since the 1930s when we hit our peak, but it can’t happen at this kind of pace. It’s just too much — we have to do something to slow it down,” Stephenson said.

Two of the three programs studied by Stephenson aimed to implement a “market access fee,” meaning a fee is collected for each hundredweight of milk produced and put into a collective pool each year. That fee is returned to the dairy farmer if they do not exceed an allowable growth level in any given year; the dairy farmer would not receive that fee back if they exceeded the hypothetical allowable growth level.

“You’re not telling people they can’t grow, but you are saying there will be a cost in that one year you’re doing it,” he said.

One of these market access fee programs is continuous, meaning the level of allowable growth and the fee were the same over the whole time period studied, while the other market access program worked with the milk-feed price ratio to give an indication on how much milk the market actually wanted.

The third program required reductions in milk marketings when a margin level trigger is reached, as dictated by the milk-feed price ratio.

Displaying several graphs that gave projections from 2014 to the end of 2020, Stephenson said he and his colleagues were able to find that these programs generally reduced variation and enhanced prices; increased net farm operating incomes; reduced the rate of farm exits; and reduced government expenditures; but also saw some decrease in domestic consumption and export sales of dairy products.

“These programs can certainly have benefits,” he said. “What programs like these are trying to do is send stronger signals to producers about just how much do we need and how much is too much.”

Stephenson added that a program would need to be implemented at a national level and that it would be impossible to implement at a state level.

“You can encourage other states and locations to take a look at this,” he said. “I think you can find sympathy in different locations but it’s by no means uniform. But I hear more people talking about or being willing to think about or listen to programs like these at this point in time.

“We aren’t talking about a Canadian-type quota system here,” he continued. “This is a program that says if you need to grow, if you want to grow, if you have a reason to grow, you’re very welcome to. It may cost you in one year to do that, but I think it also means that we allow growth to happen that keeps pace with productivity.”

After hearing the presentation, one legislator in attendance wanted to know where the pushback is as the models show these programs could work. Stephenson said while Wisconsin is blessed to have many legislators that are dairy aware, legislators in Washington, D.C., tend to think dairy is too complicated.

“They’ll say if you can come and speak to us with one voice and say ‘this is what we want in the dairy industry,’ they’d give it to us. That wouldn’t be a big issue,” Stephenson said. “But we can’t speak with one voice. We’ve never been able to do that. And it’s harder than I think ever, but we can speak with at least a strong majority and introduce ideas and topics and have that begin to become part of the conversation. 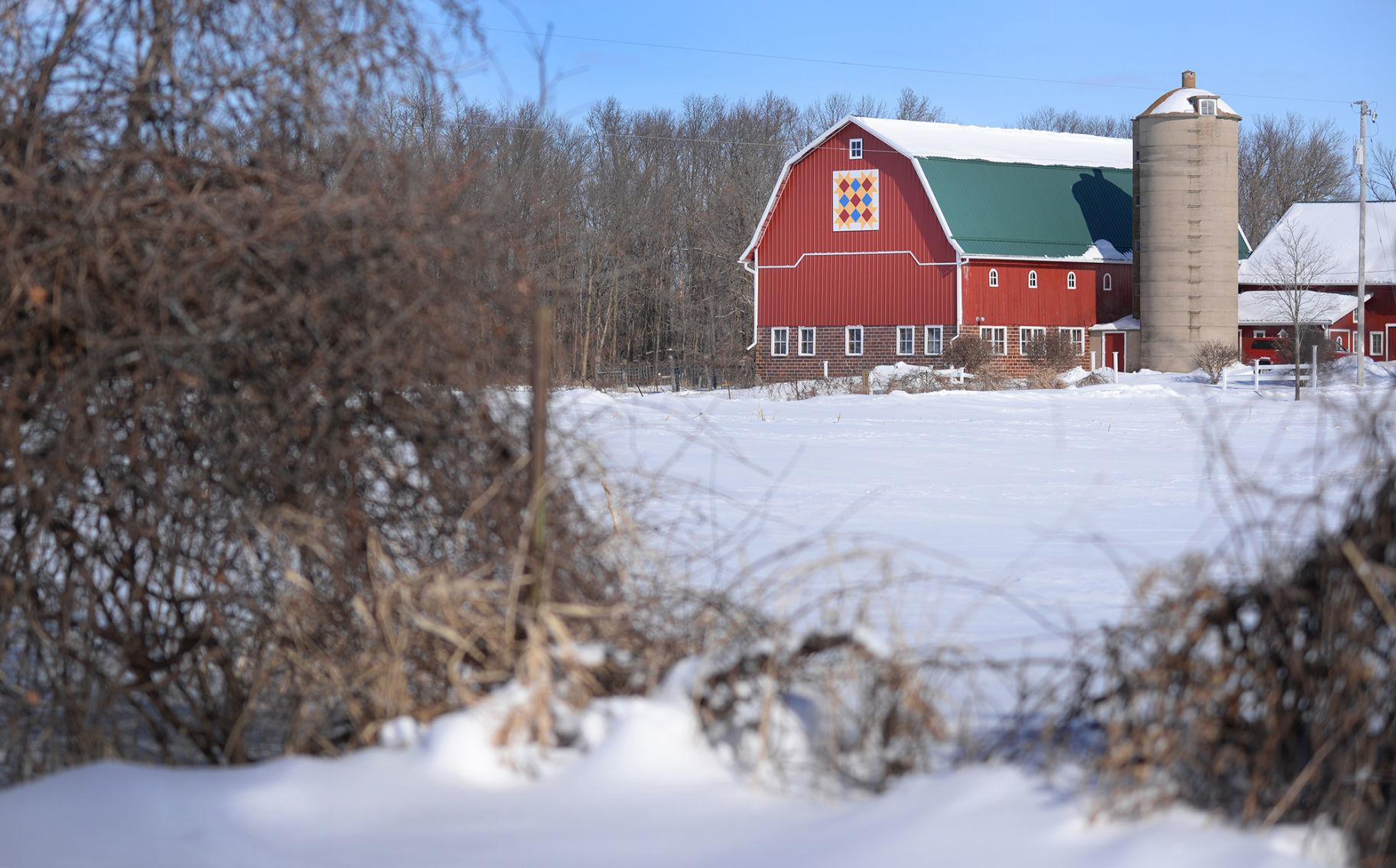 February sunshine filters over a farm scene in eastern Wisconsin.

MONDOVI — Farmers statewide who experienced building collapses in the last decade are still being encouraged to share their experiences for a farm building failure survey through UW-Extension.

While over half of the 50 sought responses have been obtained, another 20 responses are still being looked for by March 15.

Getting to 50 will allow them to have decent, reliable data to go off of, Carl Duley, UW-Extension Buffalo County agriculture agent, said at a cattle feeder clinic in Mondovi on Feb. 24.

Wisconsin farmers who had a farm building failure between 2010 and 2019 can visit buffalo.extension.wisc.edu to complete the survey.

All information provided in the surveys is kept confidential and will only be reported as compiled data.

The survey, which initially opened last October, came to be after a particularly difficult year of building failures.

Heavy snowstorms that began dropping foot after foot of snow in February 2019, followed by almost an inch of rain in March on top of that snow, meant that barns “really started going down,” Duley said. A number of barns damaged by the earlier snows then went down in April after another round of heavy snow.

In Buffalo County alone, the damage was about $10 million, Duley said.

While Wisconsin hasn’t escaped heavy bouts of snow this winter, there so far hasn’t the same type of catastrophic farm building damage that occurred last year. That doesn’t mean, though, that collapses won’t happen again.

“It happens somewhere in Wisconsin maybe not every year but every three years ... We tend to forget about it,” Duley said.

“Most people don’t even remember 2019 anymore unless they themselves maybe had a barn go down.”

Duley cited data that showed that the weight of 1 foot of new snow could range from 3 to 21 pounds per square foot depending on the wetness of the snow.

“Improper design is probably the number one reason why farms and sheds should go down or have gone down,” Duley said.

Insufficient design is then related to an insufficient snow load capacity for that building, he added.

According to preliminary survey results of the 30 respondents to that point, the majority — not everyone responded to each of the 27 questions — said that builders designed their building. Only one was reported to have been designed by a structural engineer so far, Duley said.

Eleven of the respondents thus far reported design failure as the reason they believed their buildings went down.

Nobody said that building modifications or the age of the building were the top issues.

Duley said he has been surprised by some of the results so far, including that few reported modifications to their buildings.

The survey team plans to follow up on some response with on-site visits to assess the modification topic further because some modifications, such as hanging extra barn fans, may have been overlooked as modifications, Duley said.

Going forward, they hope to work with the Wisconsin Frame Builders Association to develop a fact sheet on how to make some cost-effective improvements to current buildings.

However, ripping down old buildings to replace them new wouldn’t be very practical, Duley said.

There are probably other things that can be done to guide improvements so that perceived improvements aren’t done in error, which could instead make things worse, he added.

They also hope to create a process for inspecting current facilities for safety without imposing more mandatory regulation. 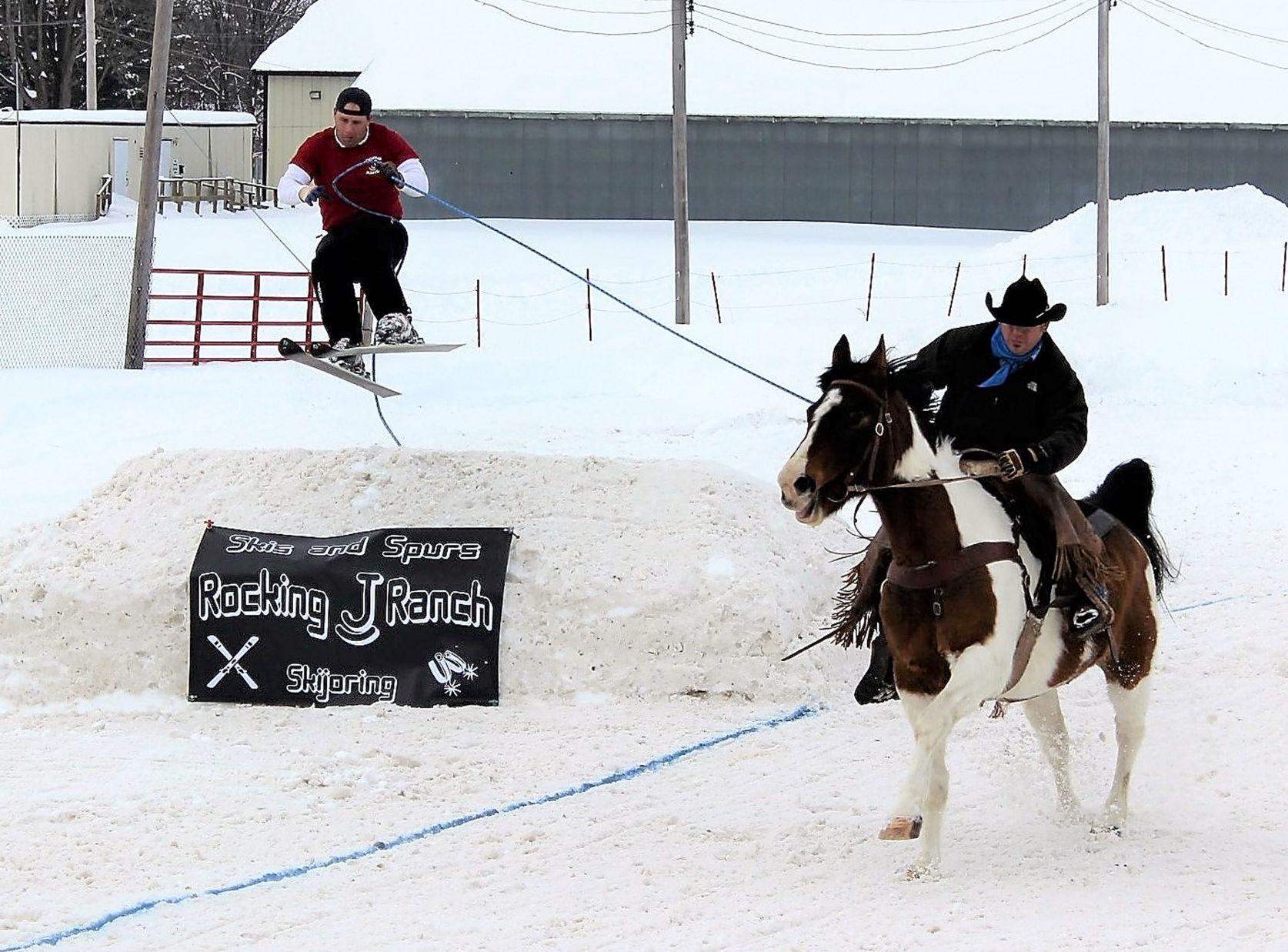 A skijoring competitor at the 2019 Rice Lake Spurs & Skis Skijoring Stampede caught some air when he flew over one of the jumps set up on the race course. The second annual Skijoring Stampede competition is set for Saturday, March 7, at the UW-Eau Claire Barron County Campus in Rice Lake.

Auctions and markets are looking at their options to move forward amid the COVID-19 pandemic, trying to keep paths open for farmers who need to buy or sell livestock, farm equipment or other essentials for them to continue their operations.

MADISON — Following the cancellation of the planned Wisconsin Assembly vote on livestock siting legislation two weeks ago, Wisconsin Dairy Alliance has announced that it had changed its position on the bill after being part of an agreement between several agricultural groups to support the bill.

According to the Wisconsin Dairy Business Association, a compromise had been reached, and Sen. Howard Marklein, R-Spring Green, Rep. Travis Tranel, R-Cuba City, and Rep. Gary Tauchen, R-Bonduel, introduced the legislation on livestock siting on Feb. 10.

When the bill was pulled Feb. 19, Marklein announced in a statement that “one of the stakeholders raised an issue that we could not overcome in time to complete the bill this session.”

The following Monday, Wisconsin Dairy Alliance released a statement announcing a change of opinion regarding the bill and detailing their effort to stop the proposed legislation.

In the statement, the Wisconsin Dairy Alliance said it was thankful they changed their minds on supporting the “harmful” livestock siting bill.

“Too often industry groups tend to gloss over critical issues that harm CAFOs in the name of stakeholder unity at the state capitol. The pressure to bow to the ‘group think’ is immense,” the Wisconsin Dairy Alliance said.

Though the Wisconsin Dairy Alliance had supported the bill as it came out of committee a few weeks ago, the change of a single word in the documentation forced them to reconsider.

“Deep in the proposed bill, the word ‘and’ was replaced with the word ‘or.’ This one-word change was exposed for what it was — a very clear way to stop farms from expanding via local zoning without requiring any finding that state standards are inadequate,” the Wisconsin Dairy Alliance said. “That single, very small word had a huge impact on your ability to grow you farm in the future.”

“The alliance began undermining the compromise and trying to amend the bill without telling any of the other stakeholders,” the statement read. “Some of you even received text messages from a registered lobbyist for that group urging you to immediately contact lawmakers and tell them to either change the bill or kill it. This is what caused the legislation to fail…

“This bill could have helped many Wisconsin farms, both CAFO and non-CAFO. It is unfortunate that it will not have the chance to do that.” 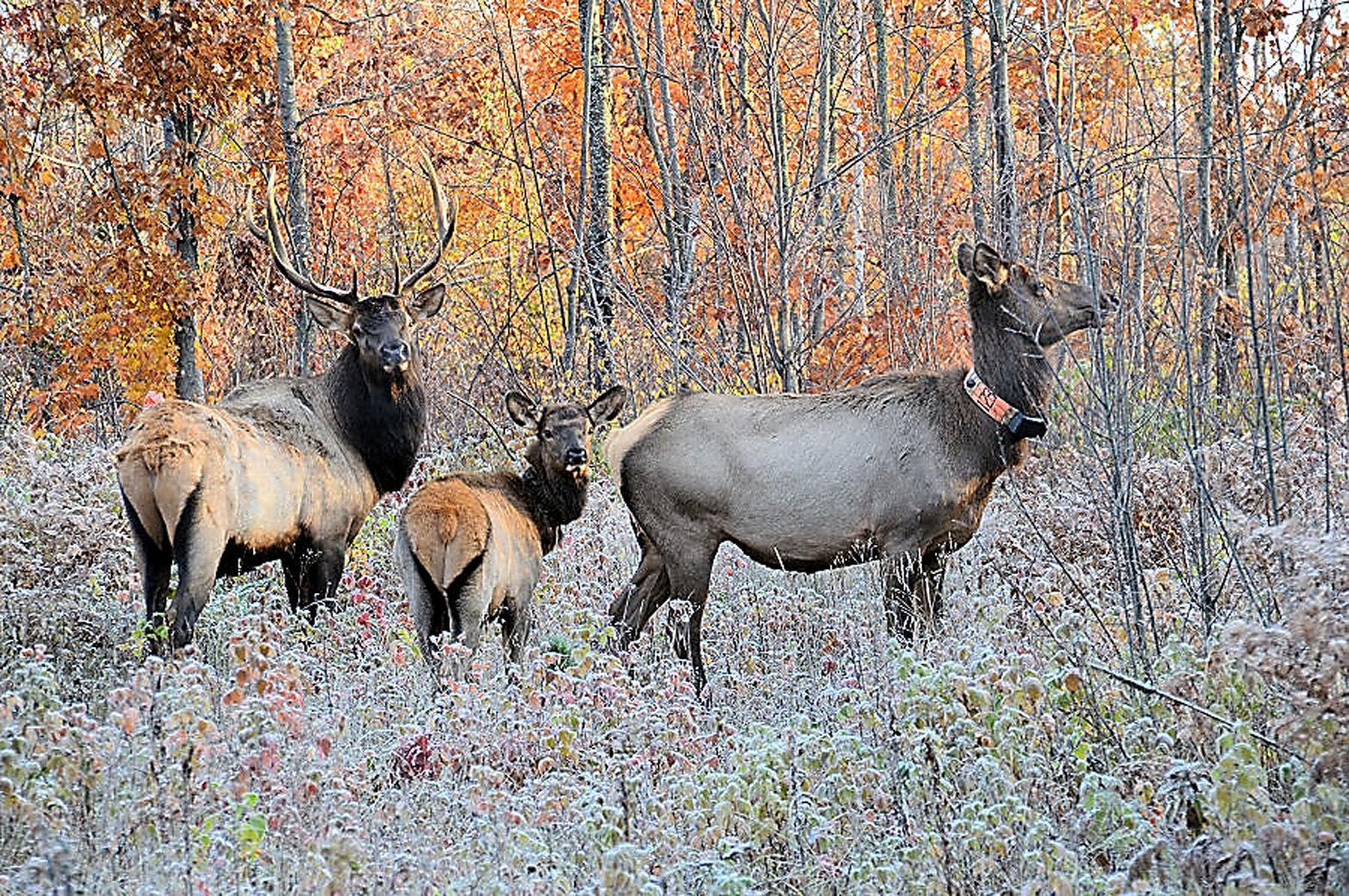 The Wisconsin DNR has released the final round of translocated elk in Sawyer County, bringing the state’s northern herd close to 300 animals. The centrally-located Black River herd adds approximately 80 more to the statewide total. 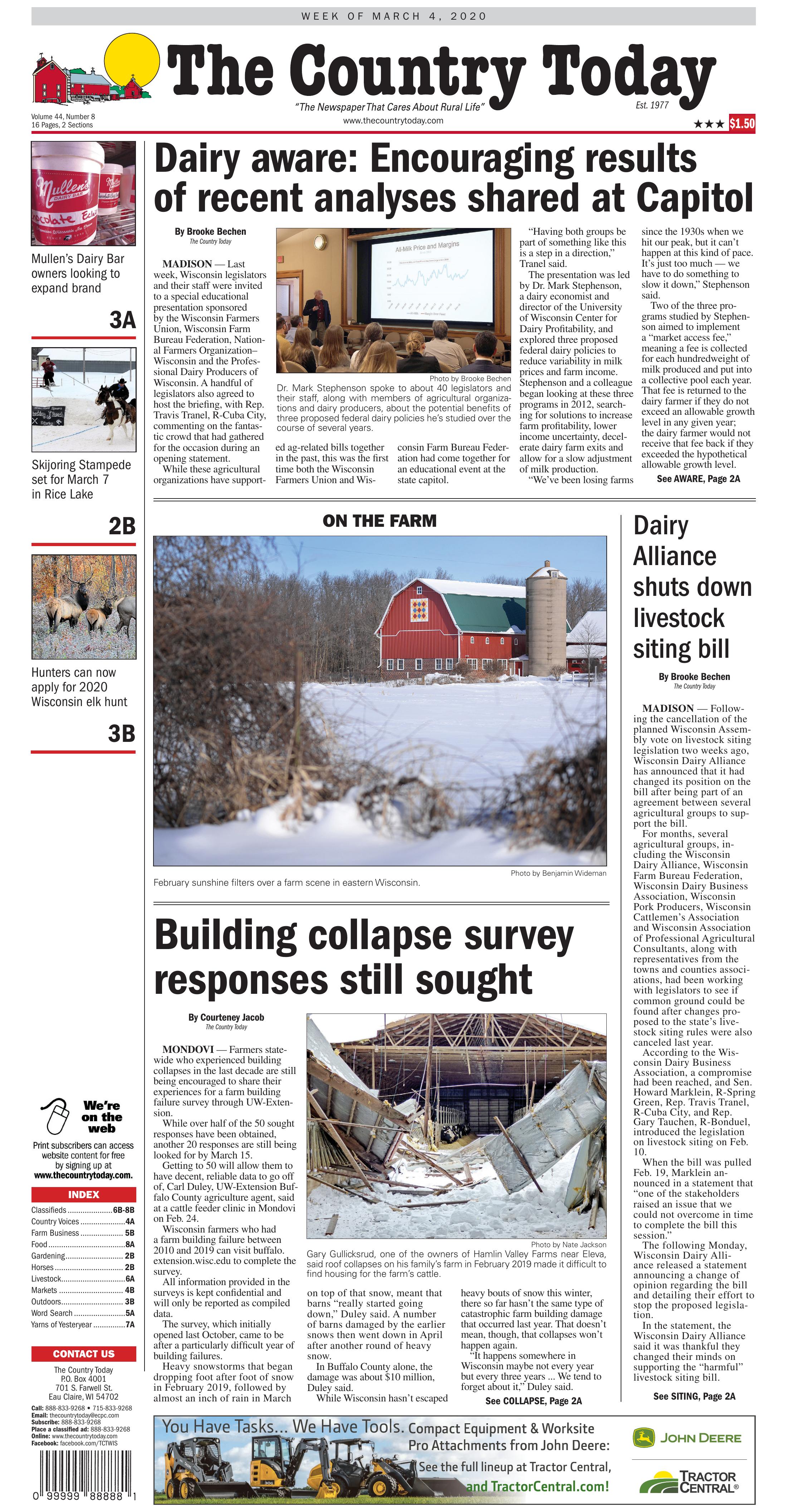