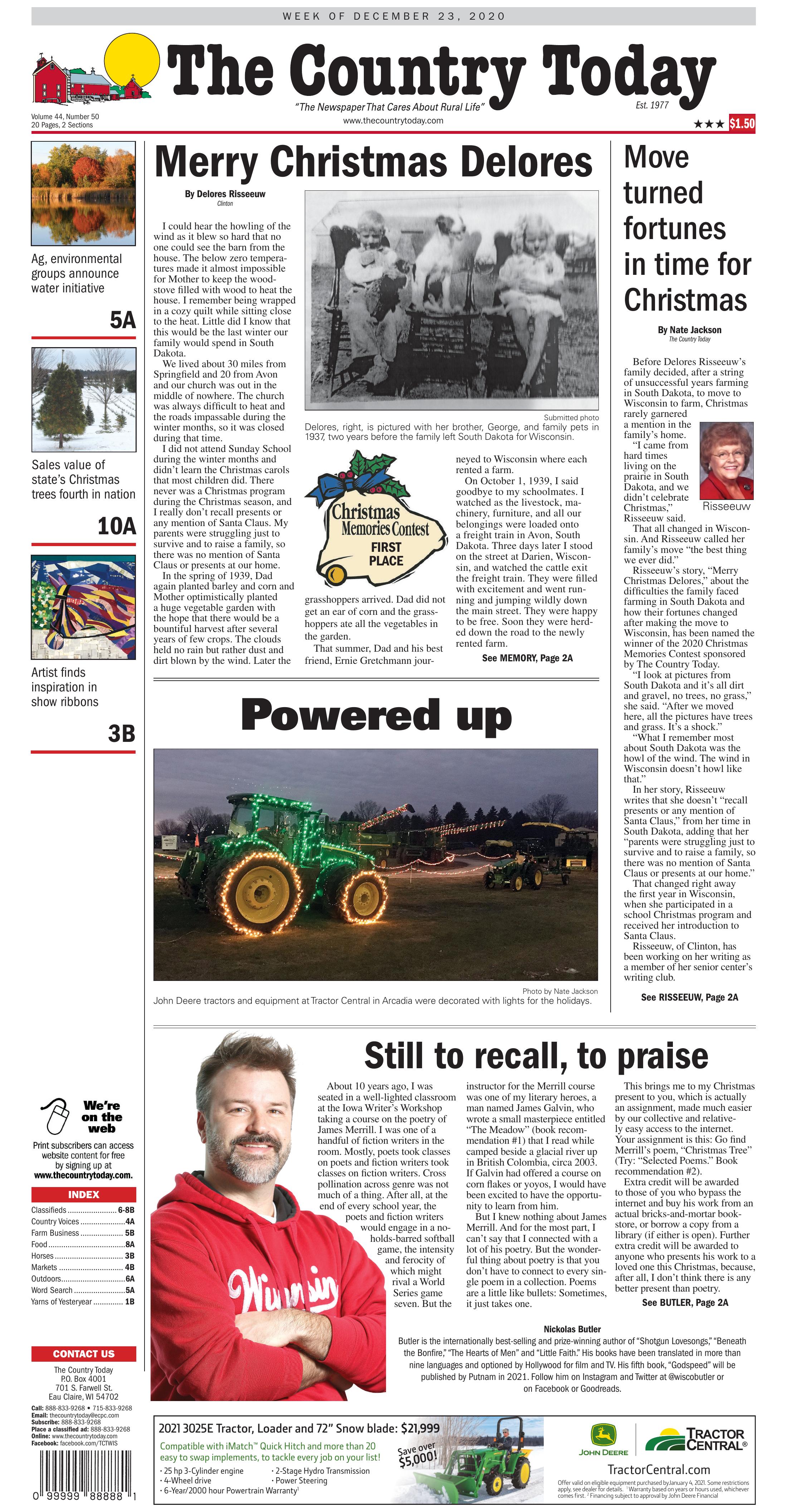 I could hear the howling of the wind as it blew so hard that no one could see the barn from the house. The below zero temperatures made it almost impossible for Mother to keep the woodstove filled with wood to heat the house. I remember being wrapped in a cozy quilt while sitting close to the heat. Little did I know that this would be the last winter our family would spend in South Dakota.

We lived about 30 miles from Springfield and 20 from Avon and our church was out in the middle of nowhere. The church was always difficult to heat and the roads impassable during the winter months, so it was closed during that time.

In the spring of 1939, Dad again planted barley and corn and Mother optimistically planted a huge vegetable garden with the hope that there would be a bountiful harvest after several years of few crops. The clouds held no rain but rather dust and dirt blown by the wind. Later the grasshoppers arrived. Dad did not get an ear of corn and the grasshoppers ate all the vegetables in the garden.

That summer, Dad and his best friend, Ernie Gretchmann journeyed to Wisconsin where each rented a farm.

On October 1, 1939, I said goodbye to my schoolmates. I watched as the livestock, machinery, furniture, and all our belongings were loaded onto a freight train in Avon, South Dakota. Three days later I stood on the street at Darien, Wisconsin, and watched the cattle exit the freight train. They were filled with excitement and went running and jumping wildly down the main street. They were happy to be free. Soon they were herded down the road to the newly rented farm.

Dad took me to school the following Monday morning, and I met my teacher, Mrs. Giese. She introduced me to the other children. Surprise, I was the only student enrolled in second grade.

After the introductions, Mrs. Giese sat down at the piano and asked, “What shall we sing this morning?” The students had favorite songs, and they all sang with such joy and enthusiasm that I was overwhelmed. We never sang in my previous school and this was exciting and amazing. Each morning we sang songs from the well-worn, battered old copies of “The Golden Book of Favorite Songs.”

Shortly after Thanksgiving, Mrs. Giese announced that everyone would be participating in the Christmas program on the evening of the last day right before Christmas vacation. She announced, “we will make invitations for you to take home to your parents. We will sing Christmas songs, do some skits and have a traditional Manger scene.”

One of the older boys yelled out, “I get to be Joseph!” Another yelled, “You were Joseph last year, it’s my turn!” I was confused, I had no idea who Joseph was, but I soon found out.

A week before the Christmas program I arrived at school and saw a wire strung from wall to wall. Heavy drapes were hung on the wires and they touched the floor. A platform had been built for the students to stand on while performing. Being a shy country girl who had never been involved in this type of activity before, I was curious and excited.

Students asked if Santa Claus was coming. Mrs. Giese replied that, “he might, if you are all good.” Someone next to me whispered, “He always brings presents.” I was anxious to meet this Santa Claus.

The school was packed that evening with many people. Later in the evening Santa arrived with sleigh bells ringing and presents for the students. Each student got a brown bag with an apple, peanuts in the shell and colorful hard Christmas candy. Oh, what a treat!

On that very first Christmas in Wisconsin we had a decorated Christmas tree in the house that Father had cut from our own 10-acre woodlot. Mother decorated it with tinsel and candies. On Christmas morning there were presents for my brother and for me under the tree. Yes, even Santa Claus had found were I lived. 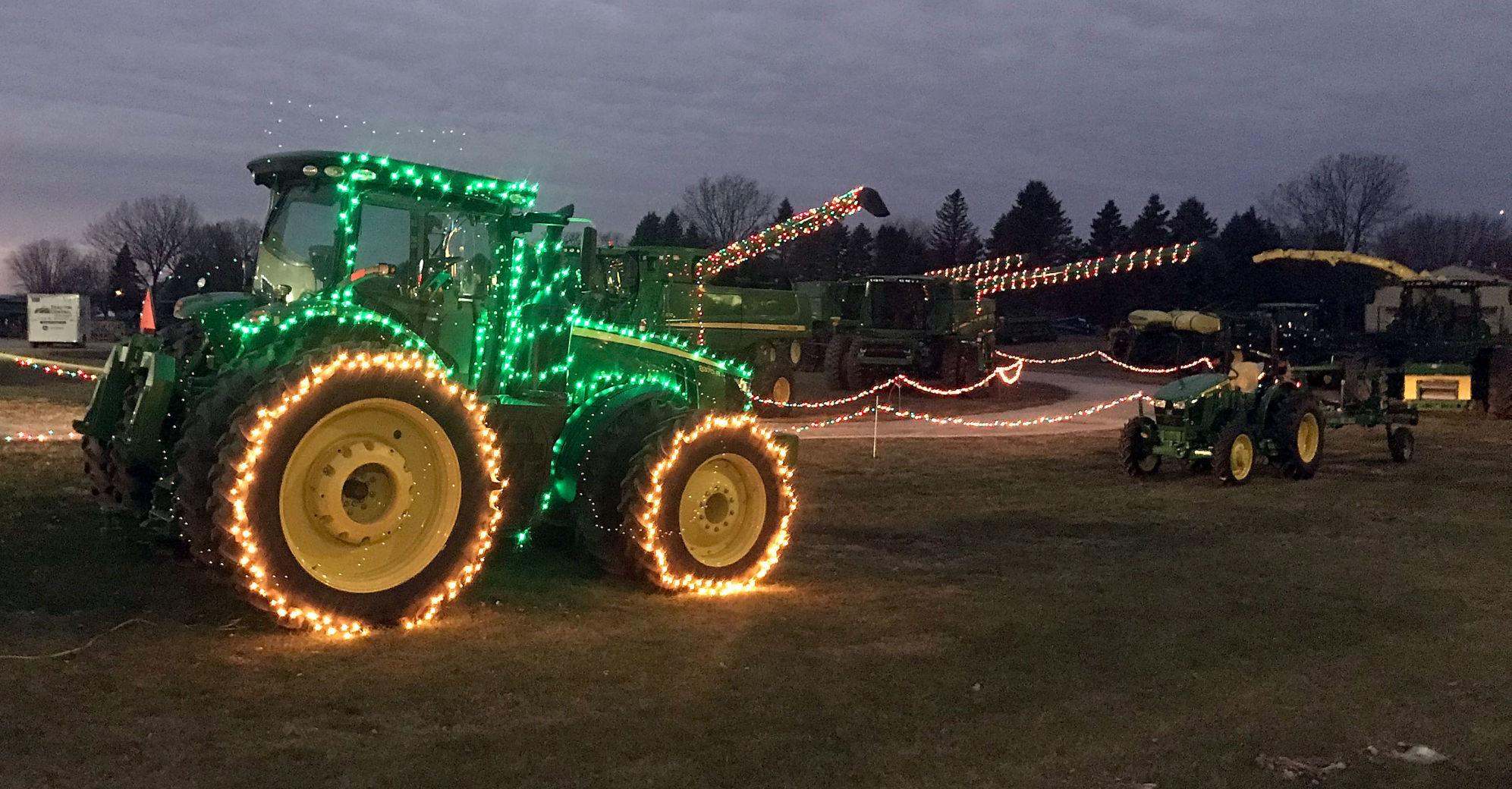 John Deere tractors and equipment at Tractor Central in Arcadia were decorated with lights for the holidays.

About 10 years ago, I was seated in a well-lighted classroom at the Iowa Writer’s Workshop taking a course on the poetry of James Merrill. I was one of a handful of fiction writers in the room. Mostly, poets took classes on poets and fiction writers took classes on fiction writers. Cross pollination across genre was not much of a thing. After all, at the end of every school year, the poets and fiction writers would engage in a no-holds-barred softball game, the intensity and ferocity of which might rival a World Series game seven. But the instructor for the Merrill course was one of my literary heroes, a man named James Galvin, who wrote a small masterpiece entitled “The Meadow” (book recommendation #1) that I read while camped beside a glacial river up in British Colombia, circa 2003. If Galvin had offered a course on corn flakes or yoyos, I would have been excited to have the opportunity to learn from him.

But I knew nothing about James Merrill. And for the most part, I can’t say that I connected with a lot of his poetry. But the wonderful thing about poetry is that you don’t have to connect to every single poem in a collection. Poems are a little like bullets: Sometimes, it just takes one.

This brings me to my Christmas present to you, which is actually an assignment, made much easier by our collective and relatively easy access to the internet. Your assignment is this: Go find Merrill’s poem, “Christmas Tree” (Try: “Selected Poems.” Book recommendation #2).

Most of you will have found “Christmas Tree” online. Great. Print a copy of the poem and take it to your own Christmas tree. Pull up a comfortable chair. If there is a loved one in your family nearby, ask them to join you. This is best accomplished at night, when your tree is softly aglow, festooned with years of ornaments, tinsel and other decorations. Consider the time you spent harvesting this tree and making it beautiful. Consider your home, your family, this year you have survived. Consider the over a quarter of a million souls who perished as a result of COVID-19. Consider the millions of Americans newly out of work. Consider the exhausted doctors and nurses and teachers. Just, consider.

I have a writing friend, Dean Kuipers, who wrote a fantastic memoir entitled “The Deer Camp” (book recommendation #3 which, incidentally, would make a terrific Christmas present) who asked a mutual friend of ours, “Have you thanked a tree today for allowing you to breathe?”

That question, like the Merrill poem, has the ability to change your perspective forever, if you allow it to. You are of course free to discard the poem, just as we dispose of our Christmas trees. You are free to sneer at this assignment, to ball up the poem and toss it into the garbage can and forget it, and this assignment, and move on — it cost you nothing. But every time I read Merrill’s poem, I think about this season, and the sacrifices we make for our families. I think about the generations that have preceded us, the traditions they wrought, the light they carried within them through periods of history so much more challenging than even this time. I think about the memories, yes, the spirits of people I have lost. And how so many of these sensations seem to coalesce and crystallize around Christmas.

Ten years ago, Galvin read “Christmas Tree” out loud to that classroom of poets, and I’m not sure that many of them would have admitted the poem affected them. But the poem not only touched me, it crushed me. And I remember a young woman who sat beside me. I think her name was Amanda. She reached across me, and with a pencil, drew a little asterisk-star on top of Merrill’s words. Even though I rarely if ever mark up the books I own, and even though I didn’t stay in touch with Amanda, I like seeing her star on that hackneyed, dog-eared page. I like the idea of decorating a poem as much as I like the notion of decorating a tree. Of being conscious of celebrating a tree, of making a tree a touchstone within my house, a place of light and laughter and congregation. I like the idea of being thankful to be breathing, to be alive.

Butler is the internationally best-selling and prize-winning author of “Shotgun Lovesongs,” “Beneath the Bonfire,” “The Hearts of Men” and “Little Faith." His books have been translated in more than nine languages and optioned by Hollywood for film and TV. He lives with his family south of Eau Claire on 16 acres of beautiful land. Follow him on Instagram at @wiscobutler or on Facebook or Goodreads. 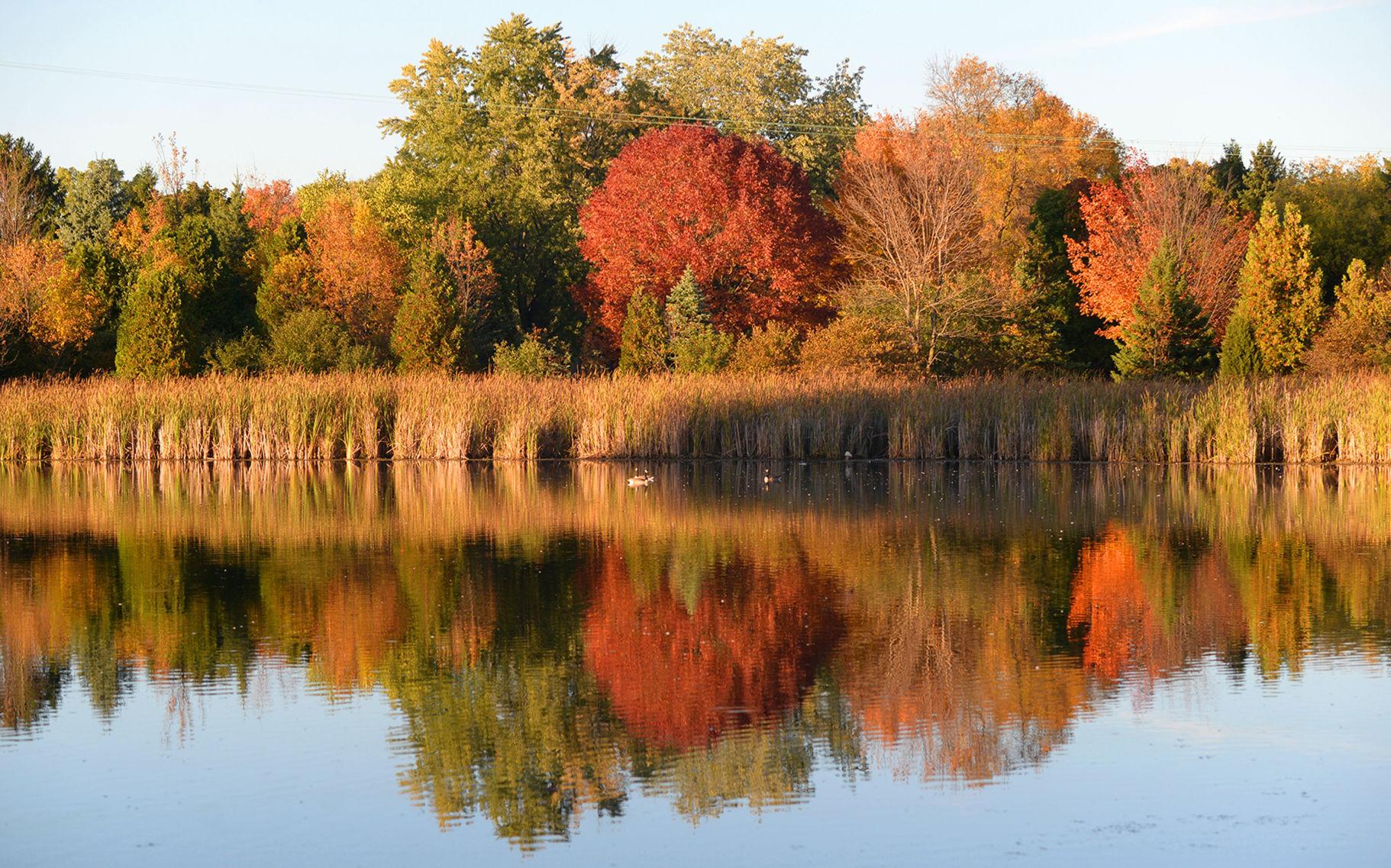 A serene pond reflects the colorful landscape in Brown County.

Before Delores Risseeuw’s family decided, after a string of unsuccessful years farming in South Dakota, to move to Wisconsin to farm, Christmas rarely garnered a mention in the family’s home.

“I came from hard times living on the prairie in South Dakota, and we didn’t celebrate Christmas,” Risseeuw said.

That all changed in Wisconsin. And Risseeuw called her family’s move “the best thing we ever did.”

Risseeuw’s story, “Merry Christmas Delores,” about the difficulties the family faced farming in South Dakota and how their fortunes changed after making the move to Wisconsin, has been named the winner of the 2020 Christmas Memories Contest sponsored by The Country Today.

“I look at pictures from South Dakota and it’s all dirt and gravel, no trees, no grass,” she said. “After we moved here, all the pictures have trees and grass. It’s a shock.”

“What I remember most about South Dakota was the howl of the wind. The wind in Wisconsin doesn’t howl like that.”

That changed right away the first year in Wisconsin, when she participated in a school Christmas program and received her introduction to Santa Claus.

Risseeuw, of Clinton, has been working on her writing as a member of her senior center’s writing club.

Regular Yarns of Yesteryear contributor Charlotte Heikkinen is the leader of the club and brought The Country Today’s contest to Risseeuw’s attention.

Coronavirus has given Risseeuw more time to write, which helped bring to mind her topic for entry in the contest.

Risseeuw’s story is featured on Page 1A of this edition. Runner-up entries can be found on Page 1B. Honorable mention selections will be printed in the Dec. 30 edition.

Risseeuw will get an annual subscription for The Country Today for submitting the winning entry.

Contest rules require that all entries be true stories. About 15 readers submitted entries in this year’s contest, which was judged by The Country Today editorial staff. Readers are encouraged to continue to enter the Christmas Memories Contest in future years as well as submit stories for the weekly Yarns of Yesteryear feature on Page 1B.