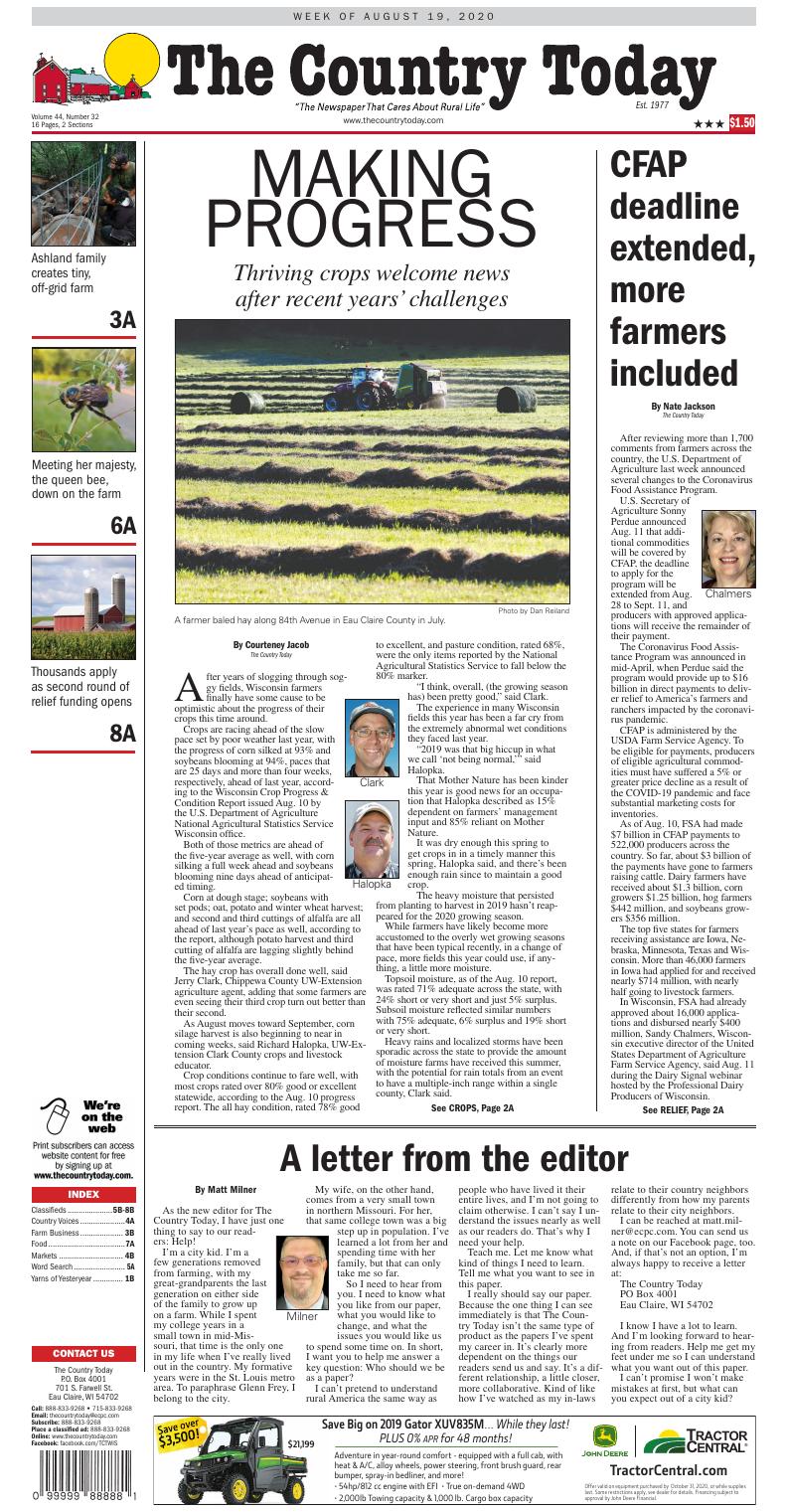 A farmer baled hay along 84th Avenue in Eau Claire County in July.

After years of slogging through soggy fields, Wisconsin farmers finally have some cause to be optimistic about the progress of their crops this time around.

Crops are racing ahead of the slow pace set by poor weather last year, with the progress of corn silked at 93% and soybeans blooming at 94%, paces that are 25 days and more than four weeks, respectively, ahead of last year, according to the Wisconsin Crop Progress & Condition Report issued Aug. 10 by the U.S. Department of Agriculture National Agricultural Statistics Service Wisconsin office.

Both of those metrics are ahead of the five-year average as well, with corn silking a full week ahead and soybeans blooming nine days ahead of anticipated timing.

The hay crop has overall done well, said Jerry Clark, Chippewa County UW-Extension agriculture agent, adding that some farmers are even seeing their third crop turn out better than their second.

Crop conditions continue to fare well, with most crops rated over 80% good or excellent statewide, according to the Aug. 10 progress report. The all hay condition, rated 78% good to excellent, and pasture condition, rated 68%, were the only items reported by the National Agricultural Statistics Service to fall below the 80% marker.

“I think, overall, (the growing season has) been pretty good,” said Clark.

The experience in many Wisconsin fields this year has been a far cry from the extremely abnormal wet conditions they faced last year.

That Mother Nature has been kinder this year is good news for an occupation that Halopka described as 15% dependent on farmers’ management input and 85% reliant on Mother Nature.

It was dry enough this spring to get crops in in a timely manner this spring, Halopka said, and there’s been enough rain since to maintain a good crop.

The heavy moisture that persisted from planting to harvest in 2019 hasn’t reappeared for the 2020 growing season.

While farmers have likely become more accustomed to the overly wet growing seasons that have been typical recently, in a change of pace, more fields this year could use, if anything, a little more moisture.

Heavy rains and localized storms have been sporadic across the state to provide the amount of moisture farms have received this summer, with the potential for rain totals from an event to have a multiple-inch range within a single county, Clark said.

That trend is continuing, with the Aug. 10 NASS report stating that areas, particularly in western Wisconsin, that missed out on scattered showers the weekend prior to the report specifically needed additional rain.

In Chippewa County, Clark said he has seen more irrigation systems in use recently.

The drier growing season has allowed some farmers to get back into some lowlands, clean them up and get more bedding, Halopka said.

As the season progresses, crops could use a little more rain and a little more warmth to finish off, Clark said, followed by a warm and dry fall with a later frost.

If forecasts from the Aug. 12 USDA NASS Wisconsin Crop Production Report — based on Aug. 1 conditions and not reflective of weather events since — are realized, farmers may see record-high yields for corn and the second-highest yields on record for soybeans this year.

Year-over-year yield increases are also being projected for winter wheat and oat production.

While good field conditions — which will also ideally turn into lower drying costs at harvest time — may be providing some measure of relief for farmers this year, low prices for the commodities themselves still present some concerns.

“Prices could be better,” Clark said.

A good growing season with an expected good yield can offset those low prices, but that offset isn’t a substitute, he said.

While strong wind storms known as a derecho last week caused significant damage to crops and buildings in Iowa, Illinois, southern Wisconsin and parts of Indiana, neither Clark nor Halopka foresaw a widespread ripple effect on the crops industry elsewhere. The full extent of the damage from the wind storms will likely not be known for weeks, however.

With prices seemingly unlikely to change much, farm managers will have questions they have to address yet, Halopka said, including “How am I going to market that crop?” and “Am I going to get enough yield to make a profit?”

Farmers will also have to consider the potential benefits of putting their crops into livestock versus selling them at market, Halopka said.

In getting answers to questions like those, “it’s OK to pick up a phone and ask for advice,” Halopka said.

Despite the challenges presented by prices and COVID-19, though, Clark said, farmers, from a crop management perspective, are finally getting a bit of a break this year.

Editorials
A letter from the editor

As the new editor for The Country Today, I have just one thing to say to our readers: Help!

I’m a city kid. I’m a few generations removed from farming, with my great-grandparents the last generation on either side of the family to grow up on a farm. While I spent my college years in a small town in mid-Missouri, that time is the only one in my life when I’ve really lived out in the country. My formative years were in the St. Louis metro area. To paraphrase Glenn Frey, I belong to the city.

My wife, on the other hand, comes from a very small town in northern Missouri. For her, that same college town was a big step up in population. I’ve learned a lot from her and spending time with her family, but that can only take me so far.

So I need to hear from you. I need to know what you like from our paper, what you would like to change, and what the issues you would like us to spend some time on. In short, I want you to help me answer a key question: Who should we be as a paper?

I can’t pretend to understand rural America the same way as people who have lived it their entire lives, and I’m not going to claim otherwise. I can’t say I understand the issues nearly as well as our readers do. That’s why I need your help.

Teach me. Let me know what kind of things I need to learn. Tell me what you want to see in this paper.

I really should say our paper. Because the one thing I can see immediately is that The Country Today isn’t the same type of product as the papers I’ve spent my career in. It’s clearly more dependent on the things our readers send us and say. It’s a different relationship, a little closer, more collaborative. Kind of like how I’ve watched as my in-laws relate to their country neighbors differently from how my parents relate to their city neighbors.

I can be reached at matt.milner@ecpc.com. You can send us a note on our Facebook page, too. And, if that’s not an option, I’m always happy to receive a letter at:

I know I have a lot to learn. And I’m looking forward to hearing from readers. Help me get my feet under me so I can understand what you want out of this paper.

I can’t promise I won’t make mistakes at first, but what can you expect out of a city kid?

After reviewing more than 1,700 comments from farmers across the country, the U.S. Department of Agriculture last week announced several changes to the Coronavirus Food Assistance Program.

U.S. Secretary of Agriculture Sonny Perdue announced Aug. 11 that additional commodities will be covered by CFAP, the deadline to apply for the program will be extended from Aug. 28 to Sept. 11, and producers with approved applications will receive the remainder of their payment.

The Coronavirus Food Assistance Program was announced in mid-April, when Perdue said the program would provide up to $16 billion in direct payments to deliver relief to America’s farmers and ranchers impacted by the coronavirus pandemic.

CFAP is administered by the USDA Farm Service Agency. To be eligible for payments, producers of eligible agricultural commodities must have suffered a 5% or greater price decline as a result of the COVID-19 pandemic and face substantial marketing costs for inventories.

As of Aug. 10, FSA had made $7 billion in CFAP payments to 522,000 producers across the country. So far, about $3 billion of the payments have gone to farmers raising cattle. Dairy farmers have received about $1.3 billion, corn growers $1.25 billion, hog farmers $442 million, and soybeans growers $356 million.

The top five states for farmers receiving assistance are Iowa, Nebraska, Minnesota, Texas and Wisconsin. More than 46,000 farmers in Iowa had applied for and received nearly $714 million, with nearly half going to livestock farmers.

“It’s pretty amazing in a COVID environment how quickly that assistance has gone out,” Chalmers said.

“We’re seeing meaningful, and I would say significant, assistance going out to dairy producers in this program,” Chalmers said. “Dairy is the beating heart of this state. Our employees are committed not only to dairy but the future of agriculture in our state.”

As the program was created, farmers and ranchers would receive direct support drawn from two possible funding sources. The first source of funding is $9.5 billion in appropriated funding provided in the Coronavirus Aid, Relief, and Economic Stability Act to compensate farmers for losses due to price declines that occurred between mid-January and mid-April and provides support for specialty crops for product that had been shipped from the farm between the same time period but subsequently spoiled due to loss of marketing channels.

The second funding source that was planned and that Chalmers said was likely to be implemented would use the Commodity Credit Corporation Charter Act to compensate producers for $6.5 billion in losses due to on-going market disruptions.

“I would look forward to a second round of CFAP, looking at what’s going on in Washington,” Chalmers said.

At the outset of the program, payments have been going out at 80% of the amount for which a farmer would be eligible. This decision was made to guarantee funding would be available to provide some payment to all eligible producers. Chalmers said through the new rules, FSA will be making the remaining 20% of payments to existing applicants early this week.

“One of the questions we’ve been getting from the producers is ‘What about the remaining 20%, when are we going to see that? Will we se it?” Chalmers said. “USDA wanted to make sure everybody got a payment, and there was a limited pot of money.

“I know that there’s a lot of stress out there, and this additional assistance will be very welcome.”

Applications for CFAP based on the expanded list of commodities announced on Aug. 11 will be accepted beginning the week of Aug. 17.

Applications for CFAP are being accepted through Sept. 11. More information about the program and the additional commodities the new rules cover can be found at www.farmers.gov/cfap. 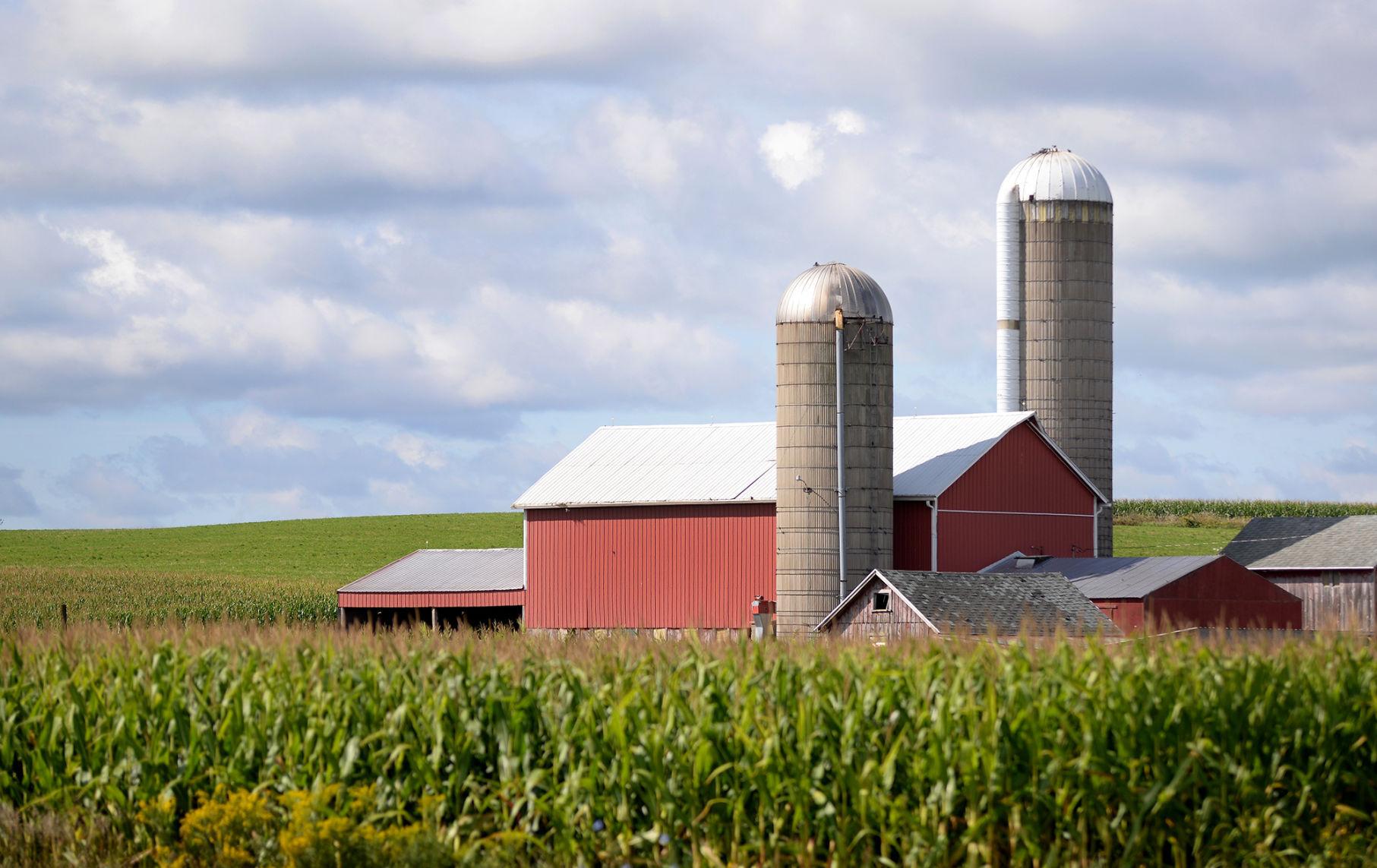 A farm is surrounded by corn fields near the town of Hortonia in rural Wisconsin. 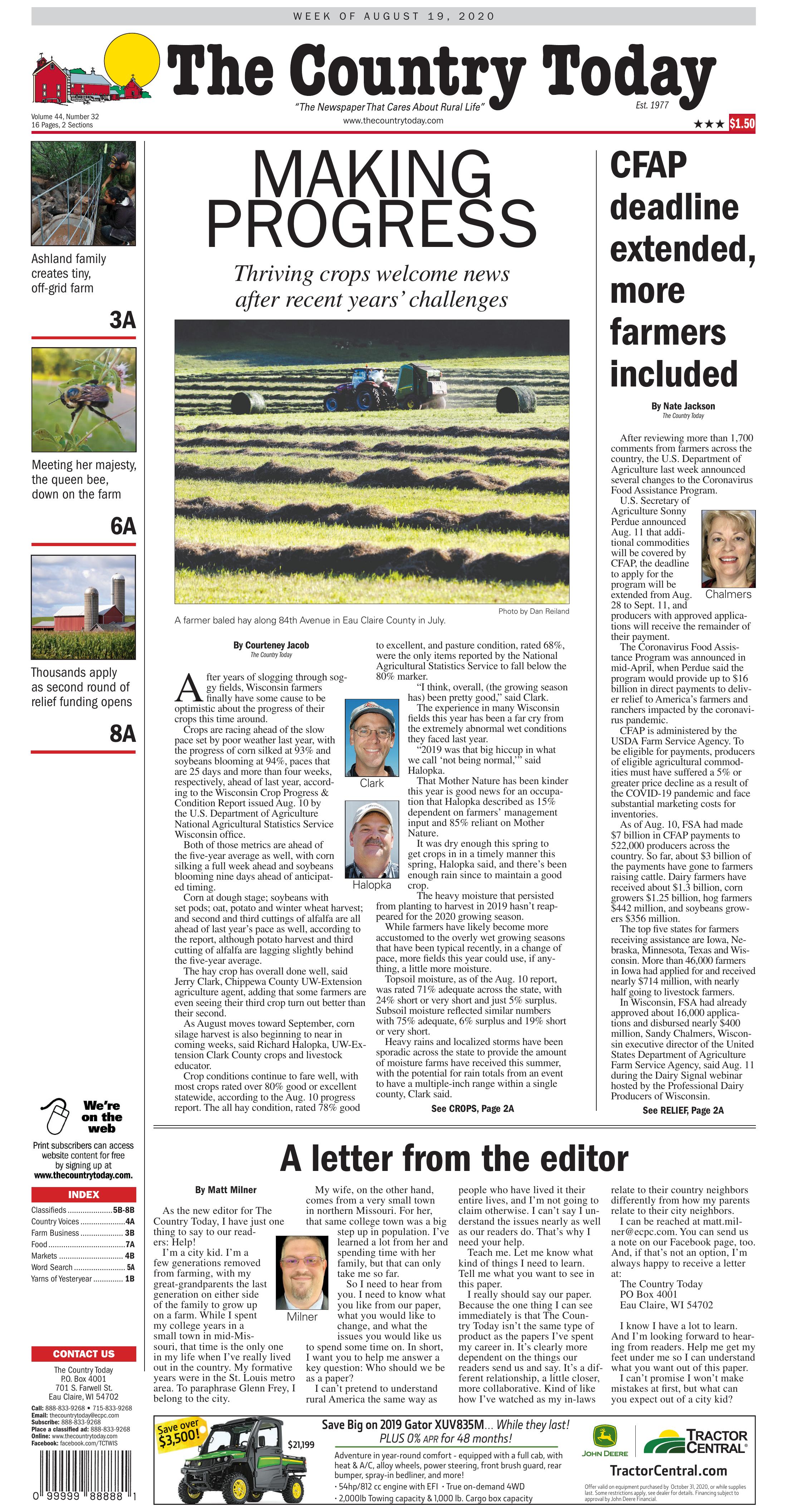