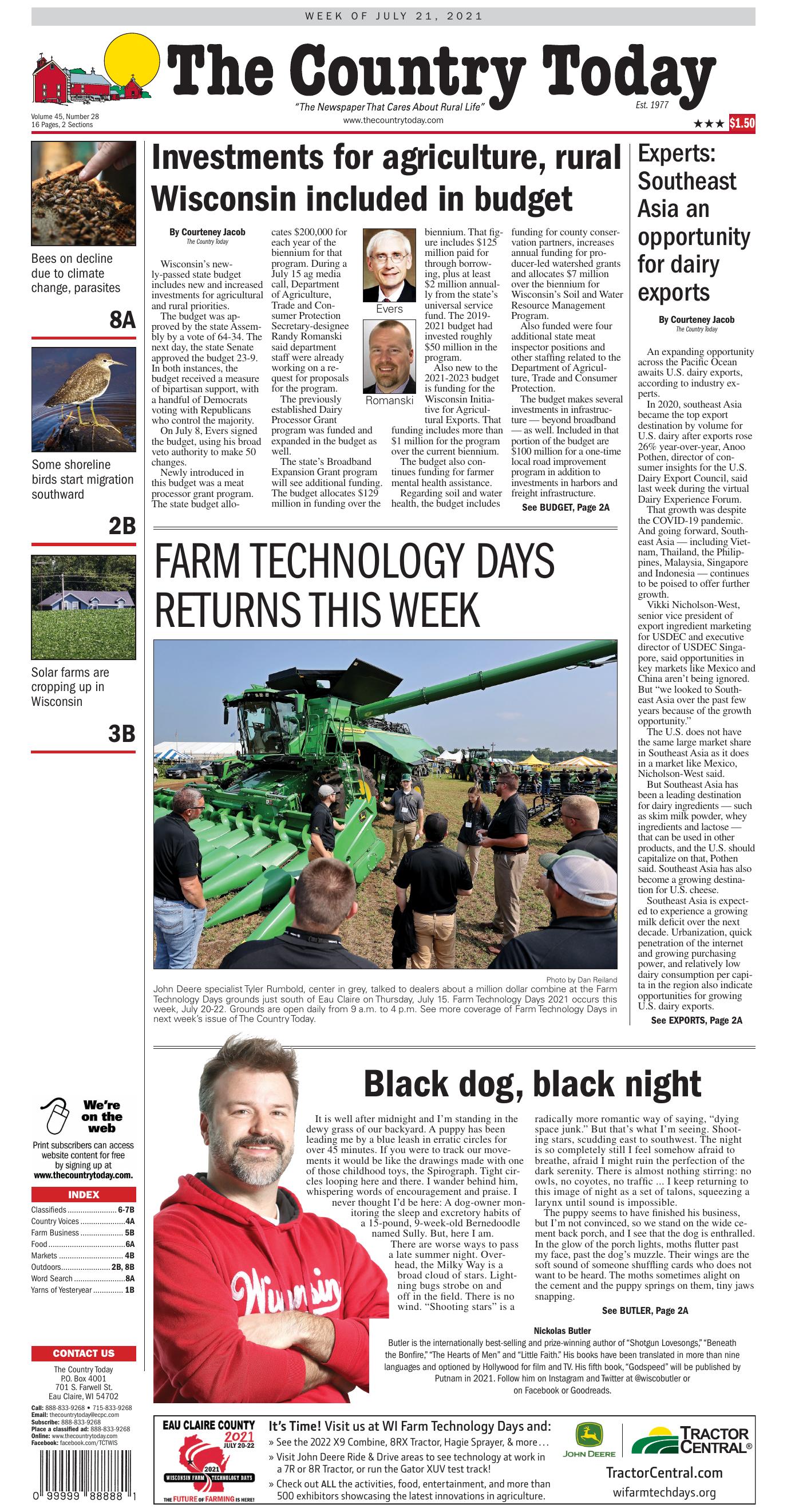 The budget was approved by the state Assembly by a vote of 64-34. The next day, the state Senate approved the budget 23-9. In both instances, the budget received a measure of bipartisan support, with a handful of Democrats voting with Republicans who control the majority.

Newly introduced in this budget was a meat processor grant program. The state budget allocates $200,000 for each year of the biennium for that program. During a July 15 ag media call, Department of Agriculture, Trade and Consumer Protection Secretary-designee Randy Romanski said department staff were already working on a request for proposals for the program.

The previously established Dairy Processor Grant program was funded and expanded in the budget as well.

The state’s Broadband Expansion Grant program will see additional funding. The budget allocates $129 million in funding over the biennium. That figure includes $125 million paid for through borrowing, plus at least $2 million annually from the state’s universal service fund. The 2019-2021 budget had invested roughly $50 million in the program.

Also new to the 2021-2023 budget is funding for the Wisconsin Initiative for Agricultural Exports. That funding includes more than $1 million for the program over the current biennium.

Also funded were four additional state meat inspector positions and other staffing related to the Department of Agriculture, Trade and Consumer Protection.

In a statement released shortly after the budget passage, Romanski said it was good to see bipartisan agreement on budgeting for the state’s agriculture industry, which contributes $104.8 billion to the state economy.

Regarding agriculture, Romanski highlighted the budget’s investments in processor innovation and expansion, increased export and marketing opportunities and conservation assistance.

He also drew attention to the funding increases for broadband and additional transportation infrastructure.

“Whether we are talking about moving commodities or connecting people through broadband, it’s good to see the legislature agree with the Governor on these key investments,” Romanski said in the statement.

During the July 15 call, Romanski said while the final budget did not include everything for agriculture that was included in Evers’ budget proposal, full inclusion is something that never happens and the budget still includes many provisions for agriculture.

The Wisconsin Cheese Makers Association also praised the agricultural investments in the state budget, particularly the increased funding for the Dairy Processor Grant Program, the new export initiative and the investments in broadband.

“Bipartisan support for targeted, smart investments in Wisconsin’s dairy industry is most welcome news for farmers and processors, as they continue to meet the challenges of market volatility and a workforce shortage,” John Umhoefer, WCMA executive director, said in a statement. “Collaboration will remain the key to success for America’s Dairyland.”

Wisconsin Farmers Union President Darin Von Ruden said in a statement that organization members were pleased that funding was included for priorities they have advocated for, including rural broadband, meat processing infrastructure, conservation and rural mental health programs.

“The budget includes some significant funding for Wisconsin agriculture that will build our resiliency coming out of the COVID-19 pandemic,” Von Ruden said.

While largely supportive of the budget, Krentz said there was still work to do legislatively, including on administrative rule N151 (regarding nitrates) at the Department of Natural Resources and on Truth in Labeling legislation. 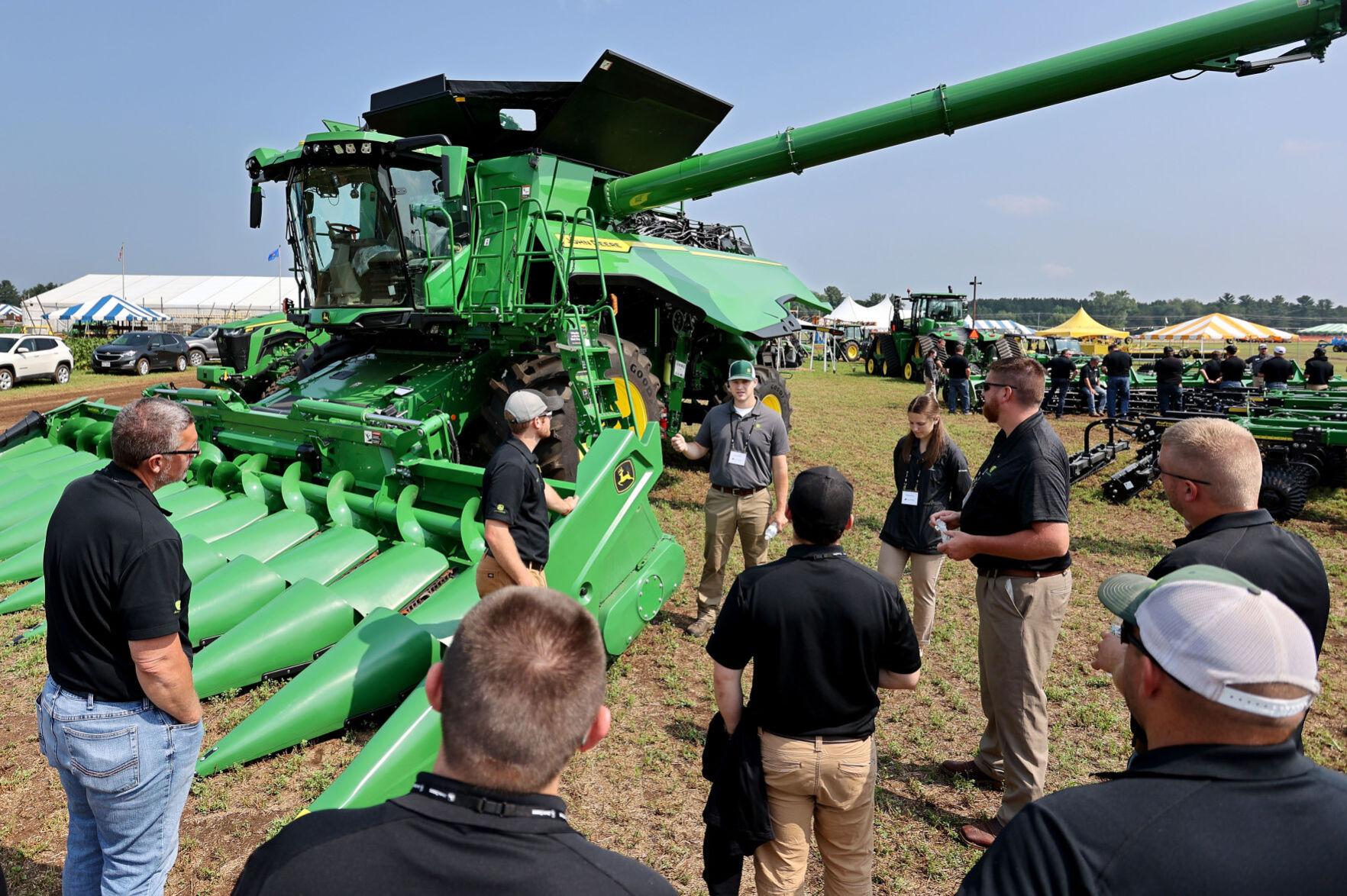 It is well after midnight and I’m standing in the dewy grass of our backyard. A puppy has been leading me by a blue leash in erratic circles for over 45 minutes. If you were to track our movements it would be like the drawings made with one of those childhood toys, the Spirograph. Tight circles looping here and there. I wander behind him, whispering words of encouragement and praise. I never thought I’d be here: A dog-owner monitoring the sleep and excretory habits of a 15-pound, 9-week-old Bernedoodle named Sully. But, here I am.

There are worse ways to pass a late summer night. Overhead, the Milky Way is a broad cloud of stars. Lightning bugs strobe on and off in the field. There is no wind. “Shooting stars” is a radically more romantic way of saying, “dying space junk.” But that’s what I’m seeing. Shooting stars, scudding east to southwest. The night is so completely still I feel somehow afraid to breathe, afraid I might ruin the perfection of the dark serenity. There is almost nothing stirring: no owls, no coyotes, no traffic ... I keep returning to this image of night as a set of talons, squeezing a larynx until sound is impossible.

The puppy seems to have finished his business, but I’m not convinced, so we stand on the wide cement back porch, and I see that the dog is enthralled. In the glow of the porch lights, moths flutter past my face, past the dog’s muzzle. Their wings are the soft sound of someone shuffling cards who does not want to be heard. The moths sometimes alight on the cement and the puppy springs on them, tiny jaws snapping.

Black ants crawl over the pale surface and he watches, as if all this were the most rapt film in the history of cinema. And there is drama. Ants slowing working their way across that surface. Moths, thumping against a Sylvania bulb, causing the light to wobble and flutter. The puppy is so tense, so entertained he’s like a kid let loose in an arcade with a 50-dollar bill. I haven’t been this exhausted in years, possibly since our son Henry was born. Those early days and nights of sleeplessness.

By and by we enter the quiet of the house. Everyone else is sleeping. The hickory floorboards creak as I guide Sully to his crate and try to coax him into the space. I lie on the floor and dribble bits of kibble into the cage. I whisper more sweet nothings. Finally, Sully is so exhausted he falls asleep on an air-vent and I transfer him into the cage. I tiptoe away and retreat to the back porch.

In literature about dogs, the prevailing trope is that pets teach us something otherwise unknowable about ourselves. Maybe it’s still too early for me to glean the particularities of what Sully has to teach me, but for now, I’m trying to see the world, and smell the world through new eyes, through dog eyes. I suppose I’m more sensitive to the fragrances on my fingers: dog-food, dirt, tomato leaves, mint ... I’m interested in the little organisms traveling across our land: the ants, the moths and butterflies, the grasshoppers.

I catch my sleep in two- or three-hour snatches, then awaken to the sound of the puppy whining. Lifting him out of his enclosure and cradling him — all dog-scent and oversized paws — is a powerfully warm feeling. I massage his belly and ribs and he rumbles out a noise I can only imagine is pleasurable. Then the leash attaches to his collar and we’re back out in the porch. Without that leash, I’d never be able to see Sully in the darkness. He’s a mostly black dog, with a patch of white on his chest and the tip of this tail. Sometimes when I’m wobbling bleary-eyed in the pre-dawn cool, sometimes my eyelids shutter as I stand, half-asleep.

If there was a moment when Sully broke through my emotional armor it may have been a day recently when I went to war with a mulberry tree near my mom’s house. The mulberry had been tormenting her for years. Dropping berries to stain the sidewalks. Attracting deer. I had no beef with the mulberry but lugged my chainsaw into town and went to work dissecting the tree. Sully sat shotgun in the truck as I shuttled loads of branches from Eau Claire out into the country for disposal. And that day, he laid his head on my thigh and I drove. I massaged his back and stomach. We rode along, amiably, quietly, like two old friends.

I realized as we traveled those country roads that the smells encased in the truck were all my favorite smells, all the smells of my grandfather. Gasoline, sawdust, chainsaw oil, fresh air, and, now — dog. My grandfather had always kept a dog, and there I was, driving his old pickup, a vehicle I’d inherited years back, his chainsaw on the floor, and a dog sitting beside me. I’d never considered until then that my perceptions of contentedness and even masculinity might ever relate to a dog, but I think all along they had. That in owning a dog, I was fulfilling some generational male need for companionship. Is that strange? As strange as setting out to write about a puppy, only to be overtaken by memories of a grandfather?

Sometimes, I’m grateful for the words I don’t plan, the unbidden prompts, the lost-and-found memories, the insights that come from exhaustion and discovery. The nights I spent awake, when I might have been asleep.

Butler is the internationally best-selling and prize-winning author of “Shotgun Lovesongs,” “Beneath the Bonfire,” “The Hearts of Men” and “Little Faith." His books have been translated in more than nine languages and optioned by Hollywood for film and TV. He lives with his family south of Eau Claire on 16 acres of beautiful land. Follow him on Instagram at @wiscobutler or on Facebook or Goodreads.

An expanding opportunity across the Pacific Ocean awaits U.S. dairy exports, according to industry experts.

That growth was despite the COVID-19 pandemic. And going forward, Southeast Asia — including Vietnam, Thailand, the Philippines, Malaysia, Singapore and Indonesia — continues to be poised to offer further growth.

Vikki Nicholson-West, senior vice president of export ingredient marketing for USDEC and executive director of USDEC Singapore, said opportunities in key markets like Mexico and China aren’t being ignored. But “we looked to Southeast Asia over the past few years because of the growth opportunity.”

The U.S. does not have the same large market share in Southeast Asia as it does in a market like Mexico, Nicholson-West said.

Southeast Asia is expected to experience a growing milk deficit over the next decade. Urbanization, quick penetration of the internet and growing purchasing power, and relatively low dairy consumption per capita in the region also indicate opportunities for growing U.S. dairy exports.

In pockets of Southeast Asia where the middle class is growing, U.S. dairy has a another chance to insert itself because those consumers are looking to increase nutritional value in what they consume as well as try new things, Nicholson-West said. For example, U.S. cream cheese “has grown in volume and opportunity” as Southeast Asian consumers look to make their own or buy a cheesecake like the one they saw online, she said.

That’s not to say that U.S. dairy doesn’t still have challenges in the Southeast Asia market.

The United States is likely to face competition from other exporters, primarily the European Union, New Zealand and Australia, Nicholson-West said. Competition in Southeast Asia hinges on factors including quality of product, availability of product, customer service and perception of value for price.

Because Southeast Asia is thousands of miles across the ocean from the U.S., exporting dairy products with a limited shelf life, like fluid milk, to the region can also be difficult.

“Plant-based beverages are on the rise,” Pothen said, “and this will be a space to watch out for.”