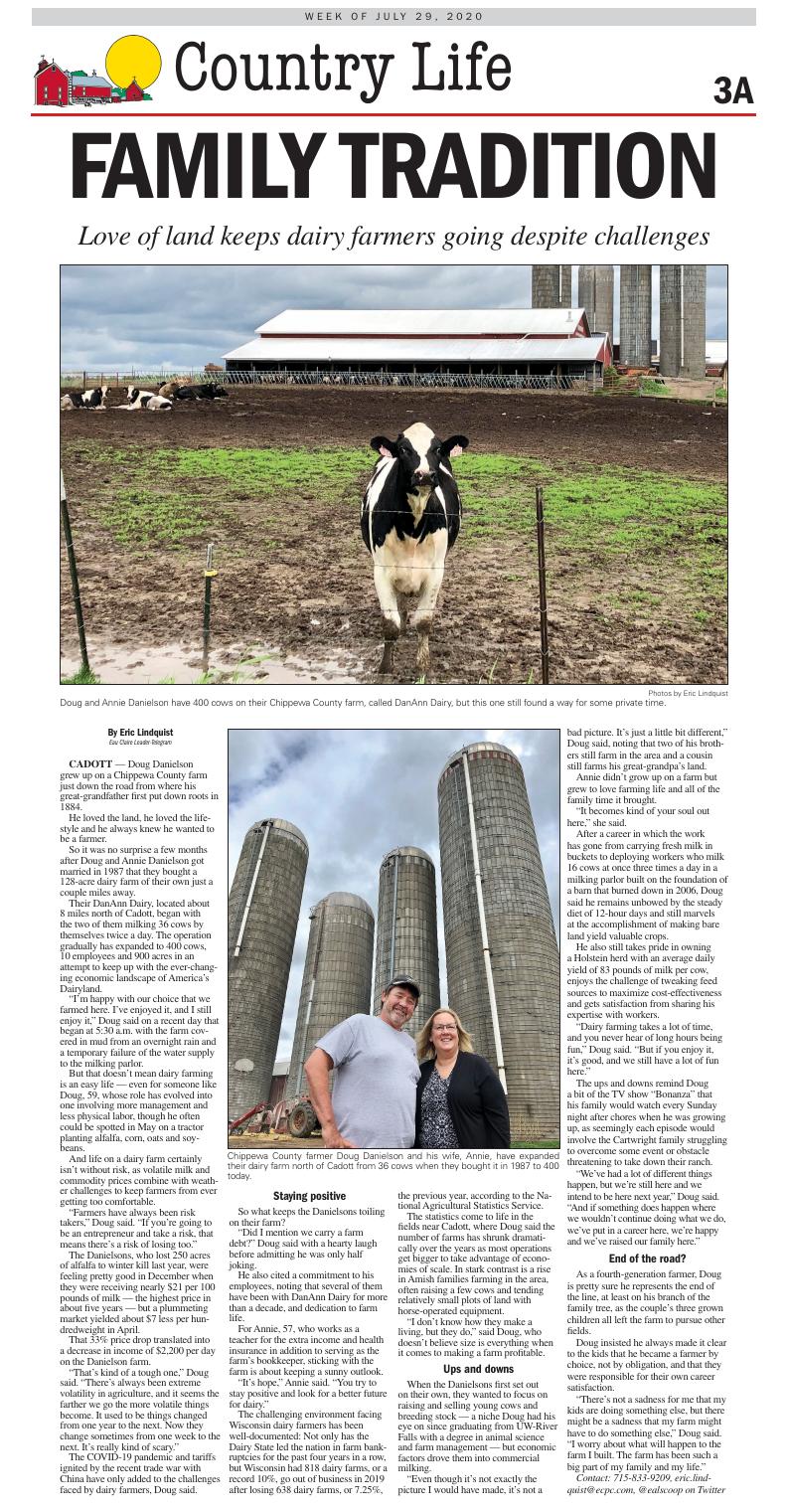 CADOTT — Doug Danielson grew up on a Chippewa County farm just down the road from where his great-grandfather first put down roots in 1884.

So it was no surprise a few months after Doug and Annie Danielson got married in 1987 that they bought a 128-acre dairy farm of their own just a couple miles away.

Their DanAnn Dairy, located about 8 miles north of Cadott, began with the two of them milking 36 cows by themselves twice a day. The operation gradually has expanded to 400 cows, 10 employees and 900 acres in an attempt to keep up with the ever-changing economic landscape of America’s Dairyland.

“I’m happy with our choice that we farmed here. I’ve enjoyed it, and I still enjoy it,” Doug said on a recent day that began at 5:30 a.m. with the farm covered in mud from an overnight rain and a temporary failure of the water supply to the milking parlor.

But that doesn’t mean dairy farming is an easy life — even for someone like Doug, 59, whose role has evolved into one involving more management and less physical labor, though he often could be spotted in May on a tractor planting alfalfa, corn, oats and soybeans.

And life on a dairy farm certainly isn’t without risk, as volatile milk and commodity prices combine with weather challenges to keep farmers from ever getting too comfortable.

“Farmers have always been risk takers,” Doug said. “If you’re going to be an entrepreneur and take a risk, that means there’s a risk of losing too.”

The Danielsons, who lost 250 acres of alfalfa to winter kill last year, were feeling pretty good in December when they were receiving nearly $21 per 100 pounds of milk — the highest price in about five years — but a plummeting market yielded about $7 less per hundredweight in April.

That 33% price drop translated into a decrease in income of $2,200 per day on the Danielson farm.

“That’s kind of a tough one,” Doug said. “There’s always been extreme volatility in agriculture, and it seems the farther we go the more volatile things become. It used to be things changed from one year to the next. Now they change sometimes from one week to the next. It’s really kind of scary.”

The COVID-19 pandemic and tariffs ignited by the recent trade war with China have only added to the challenges faced by dairy farmers, Doug said.

So what keeps the Danielsons toiling on their farm?

“Did I mention we carry a farm debt?” Doug said with a hearty laugh before admitting he was only half joking.

He also cited a commitment to his employees, noting that several of them have been with DanAnn Dairy for more than a decade, and dedication to farm life.

For Annie, 57, who works as a teacher for the extra income and health insurance in addition to serving as the farm’s bookkeeper, sticking with the farm is about keeping a sunny outlook.

“It’s hope,” Annie said. “You try to stay positive and look for a better future for dairy.”

The challenging environment facing Wisconsin dairy farmers has been well-documented: Not only has the Dairy State led the nation in farm bankruptcies for the past four years in a row, but Wisconsin had 818 dairy farms, or a record 10%, go out of business in 2019 after losing 638 dairy farms, or 7.25%, the previous year, according to the National Agricultural Statistics Service.

The statistics come to life in the fields near Cadott, where Doug said the number of farms has shrunk dramatically over the years as most operations get bigger to take advantage of economies of scale. In stark contrast is a rise in Amish families farming in the area, often raising a few cows and tending relatively small plots of land with horse-operated equipment.

“I don’t know how they make a living, but they do,” said Doug, who doesn’t believe size is everything when it comes to making a farm profitable.

When the Danielsons first set out on their own, they wanted to focus on raising and selling young cows and breeding stock — a niche Doug had his eye on since graduating from UW-River Falls with a degree in animal science and farm management — but economic factors drove them into commercial milking.

“Even though it’s not exactly the picture I would have made, it’s not a bad picture. It’s just a little bit different,” Doug said, noting that two of his brothers still farm in the area and a cousin still farms his great-grandpa’s land.

Annie didn’t grow up on a farm but grew to love farming life and all of the family time it brought.

“It becomes kind of your soul out here,” she said.

After a career in which the work has gone from carrying fresh milk in buckets to deploying workers who milk 16 cows at once three times a day in a milking parlor built on the foundation of a barn that burned down in 2006, Doug said he remains unbowed by the steady diet of 12-hour days and still marvels at the accomplishment of making bare land yield valuable crops.

He also still takes pride in owning a Holstein herd with an average daily yield of 83 pounds of milk per cow, enjoys the challenge of tweaking feed sources to maximize cost-effectiveness and gets satisfaction from sharing his expertise with workers.

“Dairy farming takes a lot of time, and you never hear of long hours being fun,” Doug said. “But if you enjoy it, it’s good, and we still have a lot of fun here.”

The ups and downs remind Doug a bit of the TV show “Bonanza” that his family would watch every Sunday night after chores when he was growing up, as seemingly each episode would involve the Cartwright family struggling to overcome some event or obstacle threatening to take down their ranch.

“We’ve had a lot of different things happen, but we’re still here and we intend to be here next year,” Doug said. “And if something does happen where we wouldn’t continue doing what we do, we’ve put in a career here, we’re happy and we’ve raised our family here.”

End of the road?

As a fourth-generation farmer, Doug is pretty sure he represents the end of the line, at least on his branch of the family tree, as the couple’s three grown children all left the farm to pursue other fields.

Doug insisted he always made it clear to the kids that he became a farmer by choice, not by obligation, and that they were responsible for their own career satisfaction.

“There’s not a sadness for me that my kids are doing something else, but there might be a sadness that my farm might have to do something else,” Doug said. “I worry about what will happen to the farm I built. The farm has been such a big part of my family and my life.” 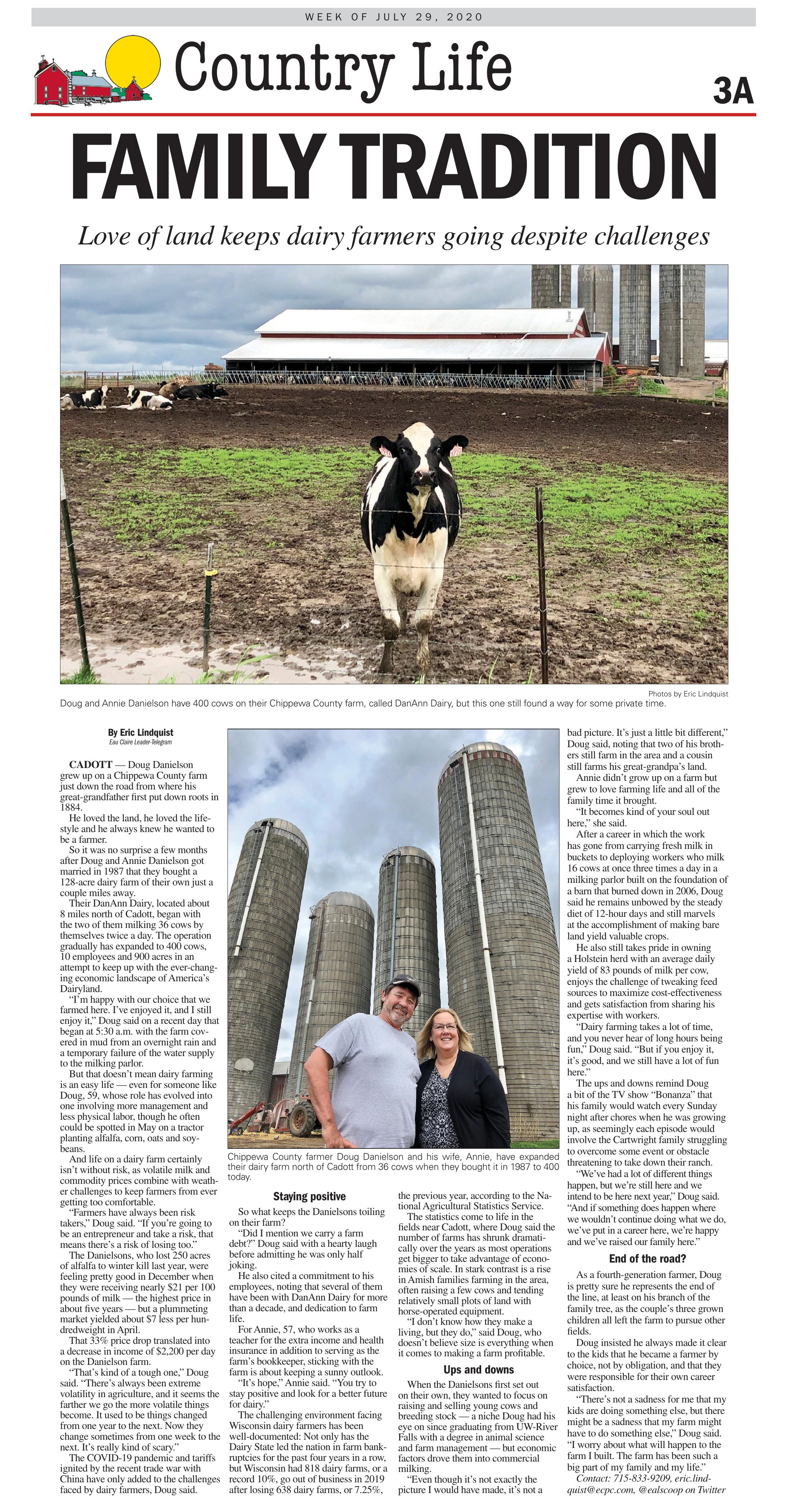