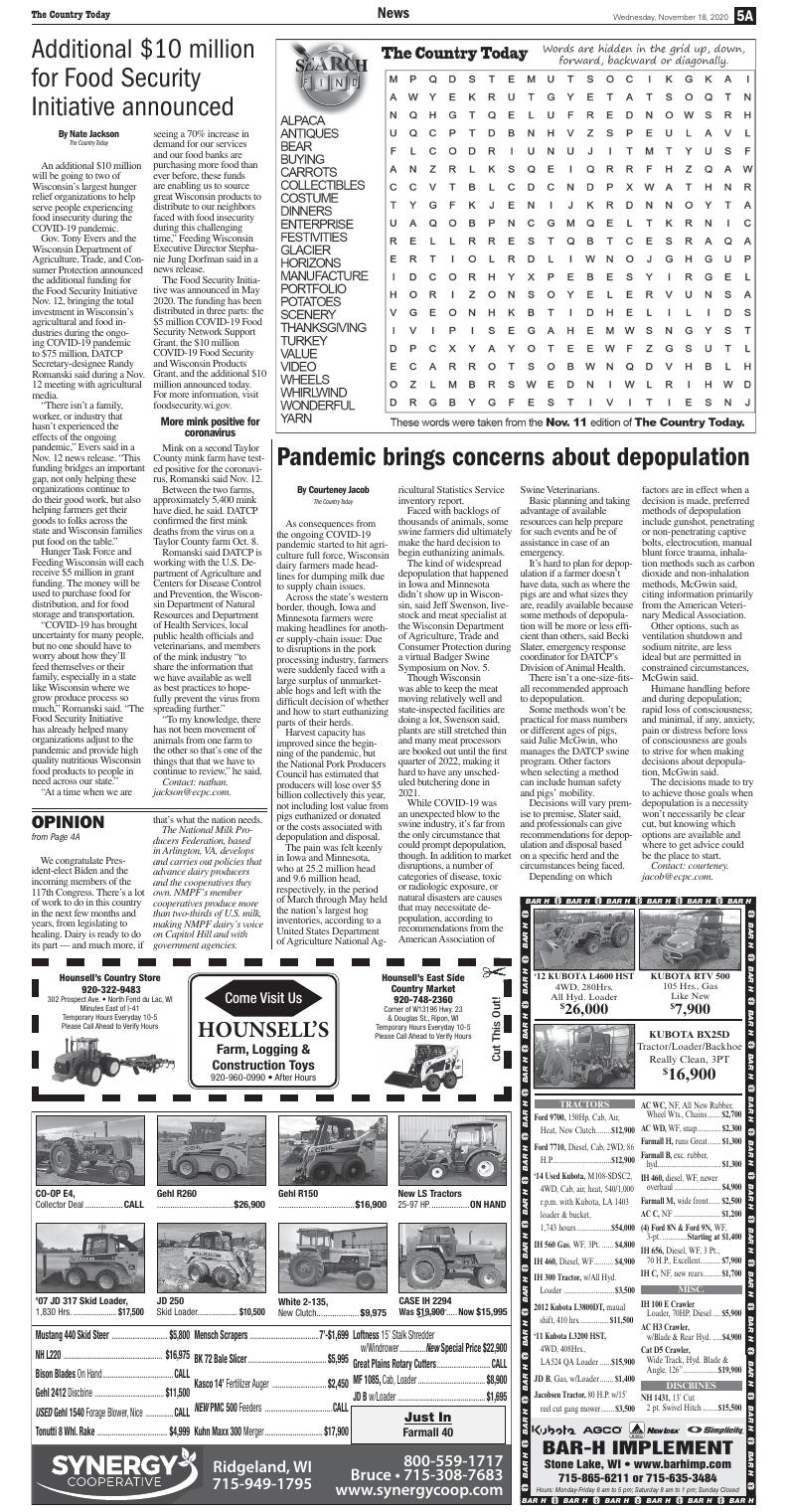 Concerns about what do when depopulation of swine herds becomes necessary came to the forefront after meat processing plants' closures due to COVID-19 created market issues.

As consequences from the ongoing COVID-19 pandemic started to hit agriculture full force, Wisconsin dairy farmers made headlines for dumping milk due to supply chain issues.

Across the state’s western border, though, Iowa and Minnesota farmers were making headlines for another supply-chain issue: Due to disruptions in the pork processing industry, farmers were suddenly faced with a large surplus of unmarketable hogs and left with the difficult decision of whether and how to start euthanizing parts of their herds.

Harvest capacity has improved since the beginning of the pandemic, but the National Pork Producers Council has estimated that producers will lose over $5 billion collectively this year, not including lost value from pigs euthanized or donated or the costs associated with depopulation and disposal.

The pain was felt keenly in Iowa and Minnesota, who at 25.2 million head and 9.6 million head, respectively, in the period of March through May held the nation’s largest hog inventories, according to a United States Department of Agriculture National Agricultural Statistics Service inventory report.

Faced with backlogs of thousands of animals, some swine farmers did ultimately make the hard decision to begin euthanizing animals.

The kind of widespread depopulation that happened in Iowa and Minnesota didn’t show up in Wisconsin, said Jeff Swenson, livestock and meat specialist at the Wisconsin Department of Agriculture, Trade and Consumer Protection during a virtual Badger Swine Symposium on Nov. 5.

Though Wisconsin was able to keep the meat moving relatively well and state-inspected facilities are doing a lot, Swenson said, plants are still stretched thin and many meat processors are booked out until the first quarter of 2022, making it hard to have any unscheduled butchering done in 2021.

While COVID-19 was an unexpected blow to the swine industry, it’s far from the only circumstance that could prompt depopulation, though. In addition to market disruptions, a number of categories of disease, toxic or radiologic exposure, or natural disasters are causes that may necessitate depopulation, according to recommendations from the American Association of Swine Veterinarians.

Basic planning and taking advantage of available resources can help prepare for such events and be of assistance in case of an emergency.

It’s hard to plan for depopulation if a farmer doesn’t have data, such as where the pigs are and what sizes they are, readily available because some methods of depopulation will be more or less efficient than others, said Becki Slater, emergency response coordinator for DATCP’s Division of Animal Health.

There isn’t a one-size-fits-all recommended approach to depopulation.

Some methods won’t be practical for mass numbers or different ages of pigs, said Julie McGwin, who manages the DATCP swine program. Other factors when selecting a method can include human safety and pigs’ mobility.

Decisions will vary premise to premise, Slater said, and professionals can give recommendations for depopulation and disposal based on a specific herd and the circumstances being faced.

Depending on which factors are in effect when a decision is made, preferred methods of depopulation include gunshot, penetrating or non-penetrating captive bolts, electrocution, manual blunt force trauma, inhalation methods such as carbon dioxide and non-inhalation methods, McGwin said, citing information primarily from the American Veterinary Medical Association.

Other options, such as ventilation shutdown and sodium nitrite, are less ideal but are permitted in constrained circumstances, McGwin said.

The decisions made to try to achieve those goals when depopulation is a necessity won’t necessarily be clear cut, but knowing which options are available and where to get advice could be the place to start.

An additional $10 million will be going to two of Wisconsin’s largest hunger relief organizations to help serve people experiencing food insecurity during the COVID-19 pandemic.

Gov. Tony Evers and the Wisconsin Department of Agriculture, Trade, and Consumer Protection announced the additional funding for the Food Security Initiative Nov. 12, bringing the total investment in Wisconsin’s agricultural and food industries during the ongoing COVID-19 pandemic to $75 million, DATCP Secretary-designee Randy Romanski said during a Nov. 12 meeting with agricultural media.

“There isn’t a family, worker, or industry that hasn’t experienced the effects of the ongoing pandemic,” Evers said in a Nov. 12 news release. “This funding bridges an important gap, not only helping these organizations continue to do their good work, but also helping farmers get their goods to folks across the state and Wisconsin families put food on the table.”

Hunger Task Force and Feeding Wisconsin will each receive $5 million in grant funding. The money will be used to purchase food for distribution, and for food storage and transportation.

“COVID-19 has brought uncertainty for many people, but no one should have to worry about how they’ll feed themselves or their family, especially in a state like Wisconsin where we grow produce process so much,” Romanski said. “The Food Security Initiative has already helped many organizations adjust to the pandemic and provide high quality nutritious Wisconsin food products to people in need across our state.”

“At a time when we are seeing a 70% increase in demand for our services and our food banks are purchasing more food than ever before, these funds are enabling us to source great Wisconsin products to distribute to our neighbors faced with food insecurity during this challenging time,” Feeding Wisconsin Executive Director Stephanie Jung Dorfman said in a news release.

Between the two farms, approximately 5,400 mink have died, he said. DATCP confirmed the first mink deaths from the virus on a Taylor County farm Oct. 8.

Romanski said DATCP is working with the U.S. Department of Agriculture and Centers for Disease Control and Prevention, the Wisconsin Department of Natural Resources and Department of Health Services, local public health officials and veterinarians, and members of the mink industry “to share the information that we have available as well as best practices to hopefully prevent the virus from spreading further.”

“To my knowledge, there has not been movement of animals from one farm to the other so that’s one of the things that that we have to continue to review,” he said. 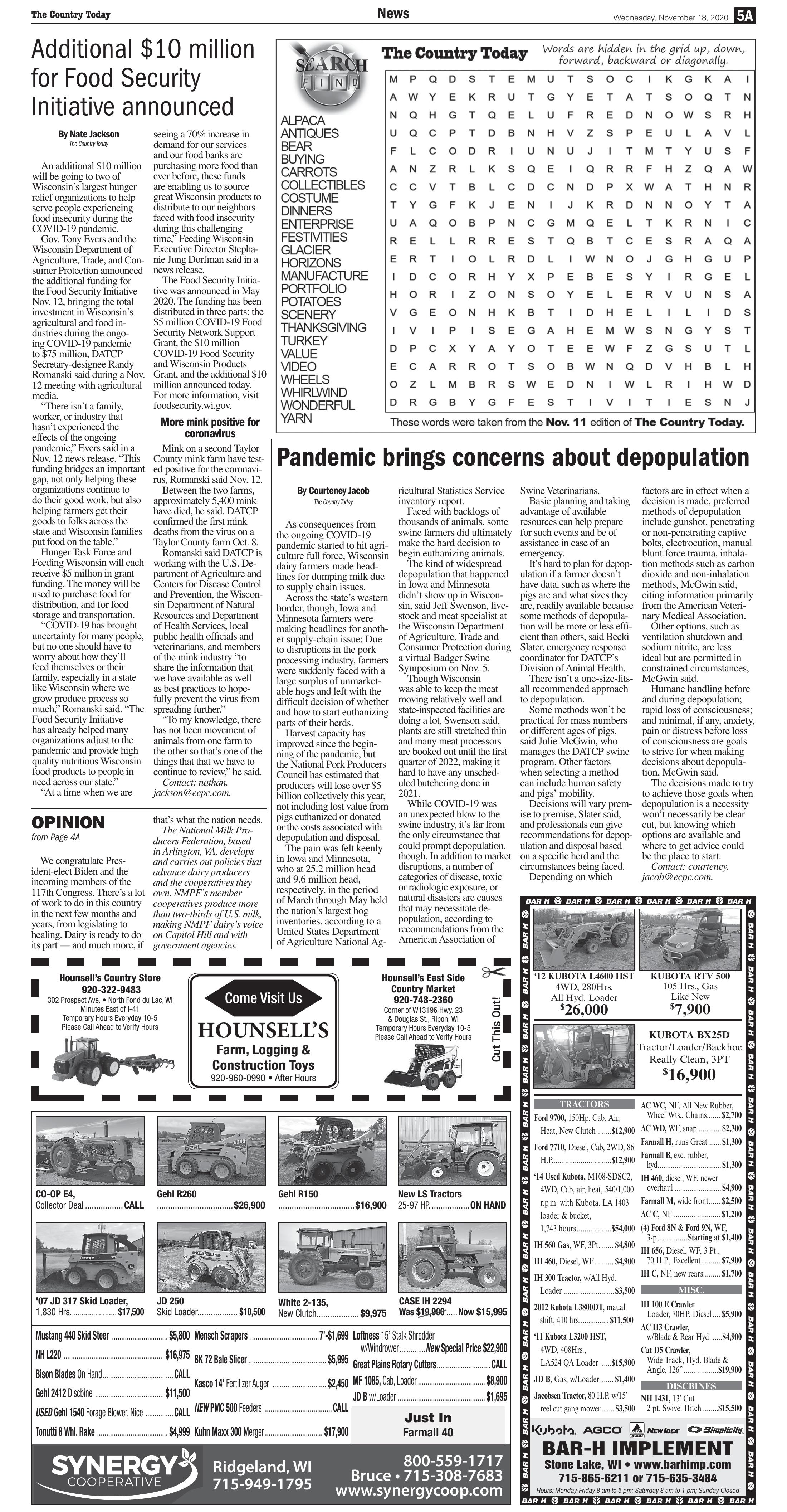