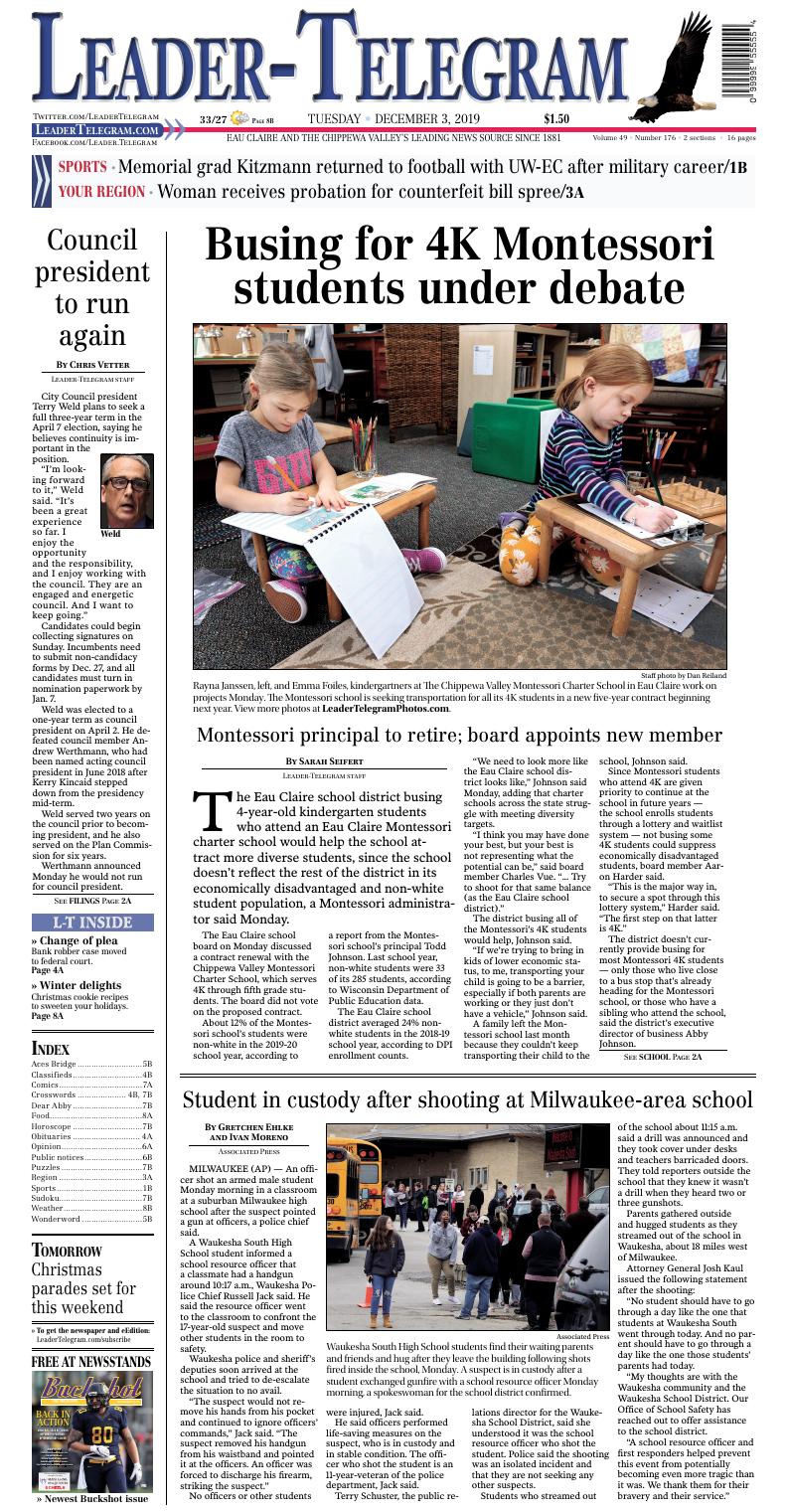 Rayna Janssen, left, and Emma Foiles, kindergartners at The Chippewa Valley Montessori Charter School in Eau Claire work on projects Monday. The Montessori school is seeking transportation for all its 4K students in a new five-year contract beginning next year.

The Eau Claire school board on Monday discussed a contract renewal with the Chippewa Valley Montessori Charter School, which serves 4K through fifth grade students. The board did not vote on the proposed contract.

“We need to look more like the Eau Claire school district looks like,” Johnson said Monday, adding that charter schools across the state struggle with meeting diversity targets.

“I think you may have done your best, but your best is not representing what the potential can be,” said board member Charles Vue. “... Try to shoot for that same balance (as the Eau Claire school district).”

The district busing all of the Montessori’s 4K students would help, Johnson said.

“If we’re trying to bring in kids of lower economic status, to me, transporting your child is going to be a barrier, especially if both parents are working or they just don’t have a vehicle,” Johnson said.

A family left the Montessori school last month because they couldn’t keep transporting their child to the school, Johnson said.

Since Montessori students who attend 4K are given priority to continue at the school in future years — the school enrolls students through a lottery and waitlist system — not busing some 4K students could suppress economically disadvantaged students, board member Aaron Harder said.

“This is the major way in, to secure a spot through this lottery system,” Harder said. “The first step on that latter is 4K.”

The district doesn’t currently provide busing for most Montessori 4K students — only those who live close to a bus stop that’s already heading for the Montessori school, or those who have a sibling who attend the school, said the district’s executive director of business Abby Johnson.

The district does bus kindergarten through fifth-grade students who attend the Montessori school.

Calculating the cost of busing Montessori 4K students in the morning is more difficult, but it would cost about $52,000 per year to bus the students home in the afternoon, Johnson said: “There isn’t a lot of opportunity to pair onto other routes, because it would be a private school route we’d potentially look at partnering with.”

Board president Eric Torres said he is concerned with the lack of diversity within the Montessori school’s 15-member governing board, of which he is a member.

The Montessori school is seeking a five-year renewal, from July 1, 2020 to June 30, 2025, according to the proposed contract.

The new contract would also double the time CVMCS’ administrator and its teachers are given to obtain Montessori certification — those staff members would have four years from their hiring date to get certified, instead of two years.

The Montessori school has been operating since 2002.

Johnson is also retiring. He has served as full-time principal of the charter school since 2010.

Johnson previously served as teacher and assistant principal at South Middle School starting in 1998; he then became principal of Little Red Elementary and principal at CVMCS.

“I think it’s going to be very difficult to replace you at Montessori,” Eau Claire schools superintendent Mary Ann Hardebeck told Johnson Monday. “You have established a great many deep working relationships and friendships there. You are respected and loved by all, and we thank you for your service.”

Lyons replaces Luginbill on board

After hearing statements from 10 applicants and taking two votes, the school board appointed UW-Stout’s chief business officer to serve as its seventh member.

Phil Lyons, UW-Stout Vice Chancellor of Administrative and Student Life Services, will replace Joe Luginbill, who resigned from the board in November.

“I volunteered in a variety of ways, from supporting PTO at Robbins (Elementary) to orchestra fundraisers at Memorial,” Lyons said, adding that his experience on the Demographic Trends and Facility Planning Committee — which he now chairs — gives him useful experience.

Lyons’ duties will begin Dec. 4. The board seat will be up for re-election in April 2020. Lyons plans to run for the seat in 2020, he stated in application papers.

The board has finalized a position description for its superintendent search, Torres said Monday. The deadline for applicants for the position is Jan. 31, 2020; the board plans to choose a new superintendent before July 1, 2020.

The board voted to appoint Harder as board treasurer. Luginbill, who resigned in November, was previously treasurer.

City Council president Terry Weld plans to seek a full three-year term in the April 7 election, saying he believes continuity is important in the position.

“I’m looking forward to it,” Weld said. “It’s been a great experience so far. I enjoy the opportunity and the responsibility, and I enjoy working with the council. They are an engaged and energetic council. And I want to keep going.”

Candidates could begin collecting signatures on Sunday. Incumbents need to submit non-candidacy forms by Dec. 27, and all candidates must turn in nomination paperwork by Jan. 7.

Weld was elected to a one-year term as council president on April 2. He defeated council member Andrew Werthmann, who had been named acting council president in June 2018 after Kerry Kincaid stepped down from the presidency mid-term.

Weld served two years on the council prior to becoming president, and he also served on the Plan Commission for six years.

Werthmann announced Monday he would not run for council president.

“I am so appreciative of the support in the community for my candidacy this past April, and have thought a lot about whether to run again, but ultimately I feel our City Council is on track and able to accomplish the goals and issues I ran on — pushing for affordable homes for everyone, investing in our neighborhoods especially older ones, and doing our part to fight climate change by achieving a citywide goal of 100% clean energy by 2050,” Werthmann said. “As a City Councilmember, alongside great colleagues, it is clear to me we have a City Council able to move this community forward and ensure that it works for absolutely everyone, especially those who have not been included in our recent success and growth.”

The council president election is the only position up for election in the city, though the City Council has a vacancy after at-large councilwoman Laura Benjamin resigned last week. Benjamin was elected in April.

The council will discuss filling her seat at a Dec. 10 meeting. The council could appoint someone to fill the seat or possibly add the race to the April ballot.

The school board Monday night appointed UW-Stout chief business officer Phil Lyons to replace Joe Luginbill, who resigned last month. That seat is up for reelection in April 2020.

Stuber, who has served more than a decade, said he is hopeful he will retain his seat.

“I just enjoy being involved in the city, and being abreast of what is going on,” Stuber said. “The city is growing and developing, and it’s fun being part of it.”

The Altoona school board has two seats up in April: board president Robin Elvig and Taylor Neff. Elvig, who was elected in 2008, became board president in May 2016. Neff won his seat in April and is wrapping up his first year on the board.

Mason was elected to the board in 2011, and is wrapping up nine years on the board, including two years as school board president. She thanked everyone who has voted for her and supported her over the past nine years.

“It’s been an unforgettable experience, but I don’t have the time to devote to this position it deserves,” Mason said. “Hopefully, I will return to public service in the future. By submitting my non-candidacy form early, hopefully it will encourage people to run.”

Mason said her work schedule now often calls for her to travel. She has attended some school board meetings via video.

“It’s awkward for everyone,” Mason said. “It’s hard to read body language and tone when you are on TV.”

The Chippewa Falls school board has two seats up in April. Pete Lehmann, who also was elected in 2011 alongside Mason, said he hadn’t decided yet whether to seek a fourth term.

The Chippewa Falls City Council has three seats up in April: Rob Kiefer (ward 2), Chuck Hull (ward 4) and Paul Nadreau (ward 6). Chippewa Falls city clerk Bridget Givens said she has given each of them their nomination packets, and none of them had indicated to her they weren’t seeking re-election.

Jan Traxler didn’t hesitate to begin collecting signatures for re-election to the Menomonie City Council. Traxler collected the 20 signatures she needed in her ward and turned in all her paperwork Monday morning at City Hall.

“It was all door-to-door,” Traxler said. “This is my third time I’ve run. No reason not to (collect signatures immediately.)”

Traxler, who is retired, said she is proud of the work the city has accomplished in her term in office, from revitalization in downtown and growth in industrial parks to dredging lakes.

“I like what I do, and I like the people I work with,” she said. “And there is always something going on.”

The Menomonie City Council has 11 wards, with the even-numbered seats up for re-election on April 7.

“I’m not aware that any have indicated they are not running,” said Menomonie city administrator Lowell Prange. “(Re-election forms) were distributed to them in the council packets last week, including their non-candidacy forms, if they choose to do that.”

The Menomonie school board has three seats up for re-election in April: board president Amy Riddle-Swanson, Daniel Paulson and Heather Klanderman. 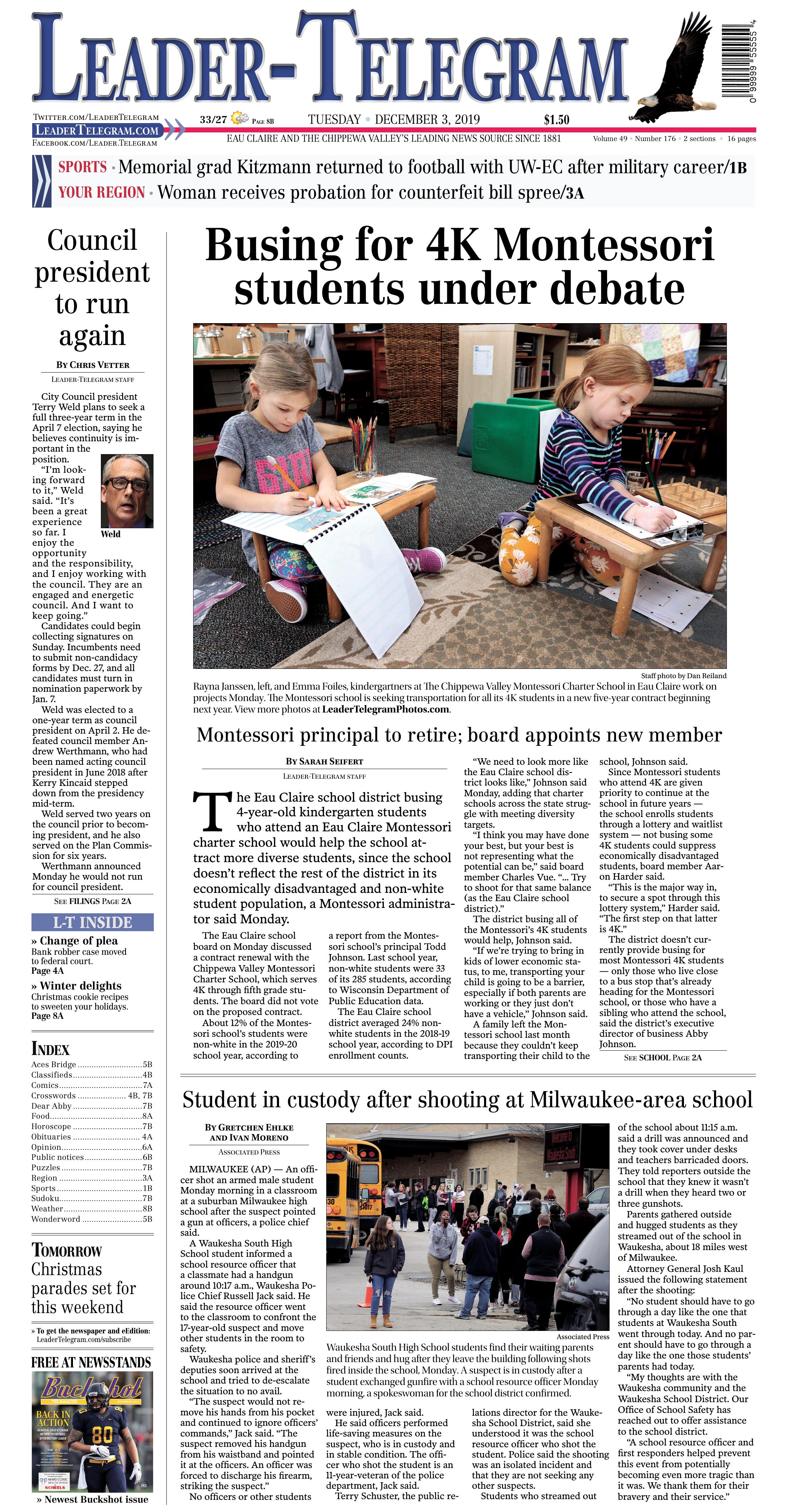