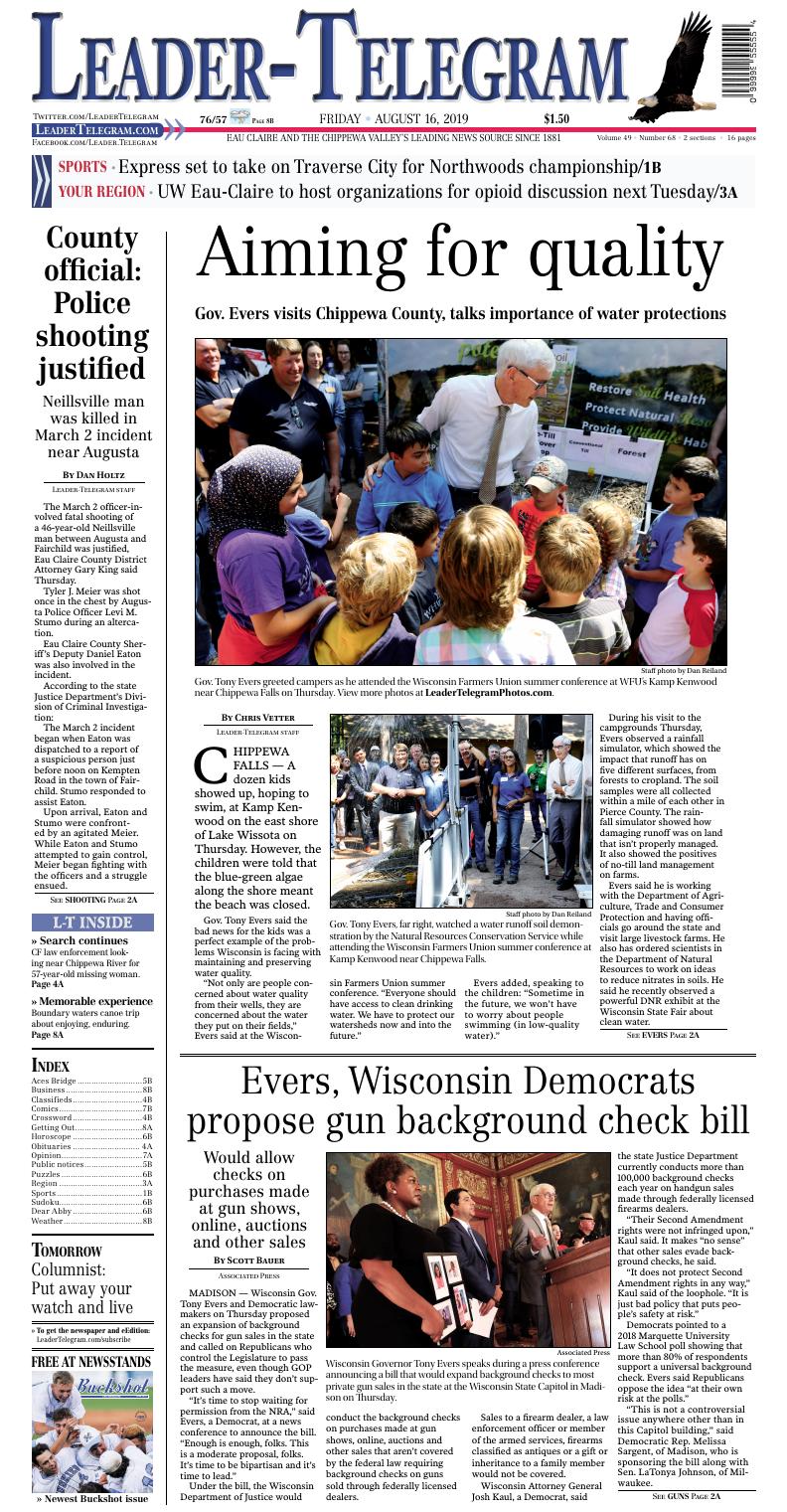 CHIPPEWA FALLS — A dozen kids showed up, hoping to swim, at Kamp Kenwood on the east shore of Lake Wissota on Thursday. However, the children were told that the blue-green algae along the shore meant the beach was closed.

Gov. Tony Evers said the bad news for the kids was a perfect example of the problems Wisconsin is facing with maintaining and preserving water quality.

“Not only are people concerned about water quality from their wells, they are concerned about the water they put on their fields,” Evers said at the Wisconsin Farmers Union summer conference. “Everyone should have access to clean drinking water. We have to protect our watersheds now and into the future.”

Evers added, speaking to the children: “Sometime in the future, we won’t have to worry about people swimming (in low-quality water).”

During his visit to the campgrounds Thursday, Evers observed a rainfall simulator, which showed the impact that runoff has on five different surfaces, from forests to cropland. The soil samples were all collected within a mile of each other in Pierce County. The rainfall simulator showed how damaging runoff was on land that isn’t properly managed. It also showed the positives of no-till land management on farms.

Evers said he is working with the Department of Agriculture, Trade and Consumer Protection and having officials go around the state and visit large livestock farms. He also has ordered scientists in the Department of Natural Resources to work on ideas to reduce nitrates in soils. He said he recently observed a powerful DNR exhibit at the Wisconsin State Fair about clean water.

“I appreciate the good work done around wetlands,” he said.

“I recognize it’s a challenging life to be a farmer,” Evers said.

Craig Myhre, who farms about 800 acres south of Osseo in Trempealeau County, said this has been a tough year for farmers. At age 52, he is worried about going out of business. Fertilizer and seed prices remain high, and market prices are down.

“I didn’t have a good year last year,” he said. “Anyone I talk to is very worried. It’s going to be a do-or-die year for many farmers. I’m too young to quit, but how much equity do you want to burn up? The banks will call the shots, ultimately.”

Like other farmers, Myhre said the tariffs have devastated the soybean business, as China completely stopped buying U.S. soybeans. China had been the number one foreign market.

“We’ve got a lot of backup of grain that should have been going out all summer,” Myhre said. “Once they get them loaded (on cargo ships), is there anywhere for them to go?”

Ken Schmitt, a former Chippewa County board member from the town of Howard, said it will be a challenging year for all farmers. Schmitt is cutting back on the number of cows on his farm.

Schmitt said he was pleased that Evers made the trip to Chippewa County to hear from farmers.

“It’s nice to see the concerns about groundwater, because there are a lot of issues out there,” Schmitt said. “It would be a shame to squander that for future generations.”

About 120 people attended the WFU summer conference. WFU executive director Julie Keown-Bomar said it was a positive discussion about water quality and reducing pollution, along with analyzing consolidation in agriculture and the impact it is having on farmers. She was thrilled Evers participated in the discussion.

“We’re focusing on water and anti-trust issues, and he’s here to hear our perspectives on it,” Keown-Bowar said.

Like others, Keown-Bowar said the tariffs are adding to the stressful conditions farmers are facing.

“Things were bad before the tariffs, and the tariffs have made them worse,” she said. “This is salt in the wounds.”

Evers spoke for about 15 minutes, then observed the rainfall simulator before leaving. He declined to speak with the assembled media, citing his tight schedule.

Tyler J. Meier was shot once in the chest by Augusta Police Officer Levi M. Stumo during an altercation.

According to the state Justice Department’s Division of Criminal Investigation:

The March 2 incident began when Eaton was dispatched to a report of a suspicious person just before noon on Kempten Road in the town of Fairchild. Stumo responded to assist Eaton.

Upon arrival, Eaton and Stumo were confronted by an agitated Meier. While Eaton and Stumo attempted to gain control, Meier began fighting with the officers and a struggle ensued.

During the struggle, less than lethal means were deployed but were unsuccessful. Meier was subsequently shot by law enforcement.

The officers immediately began life-saving measures, but Meier died at the scene.

King offered the following reasons why use of force against Meier was justified:

• Meier displayed erratic behavior before his contact with law enforcement. He closely followed a farmer driving a tractor and climbed onto the tractor, opened the door and began to kiss the farmer’s hand. Meier also said he was stranded and needed a tractor, even though he was operating his own vehicle at the time. Meier later put his vehicle into the ditch by the farmer’s mailbox.

• On a cold winter day, Meier took off all his clothing and approached the farmer and his friend in the farmer’s shop. Meier was told to leave and ultimately the farmer called 911 over the disturbing behavior he had witnessed.

• Meier was flagged by law enforcement dispatchers as combative. Meier had a history of violent behavior, including a prior conviction for felony murder. Dispatchers relayed pertinent historical information to law enforcement prior to their contact with Meier.

• Meier made multiple concerning statements to law enforcement. These included statements about dying and telling the officers they were going to have to kill him.

• A witness who observed part of the struggle advised that Meier was given many chances to comply with the officers before the physical fight began. The witness believed Meier’s actions appeared to be “suicide by cop.”

• Law enforcement attempted to gain control of Meier by the use of less lethal uses of force. These measures were deployed and included the use of a taser and pepper spray.

• During the struggle with law enforcement, Meier ripped off several items from the belts of officers, continually demonstrating not only his failure to comply but his intent to inflict harm to the officers.

• Meier made multiple aggressive moves toward the officers during the struggle and demonstrated an ability to inflict great bodily harm or death to them, including but not limited to attempts to strangle Stumo.

• Officers involved in the incident provided a consistent account of events that resulted in the use of lethal force against Meier.

• Meier’s actions toward the officers put them in a position to fear for their lives.

Meier was sentenced in March 2010 to five years in prison followed by five years of extended supervision for felony murder in the death of a Neillsville man in 2009.

Meier killed Keith Young, 43, by punching him in the head on Feb. 1, 2009, during an altercation at a Neillsville tavern.

Young died the next day at a Marshfield hospital. 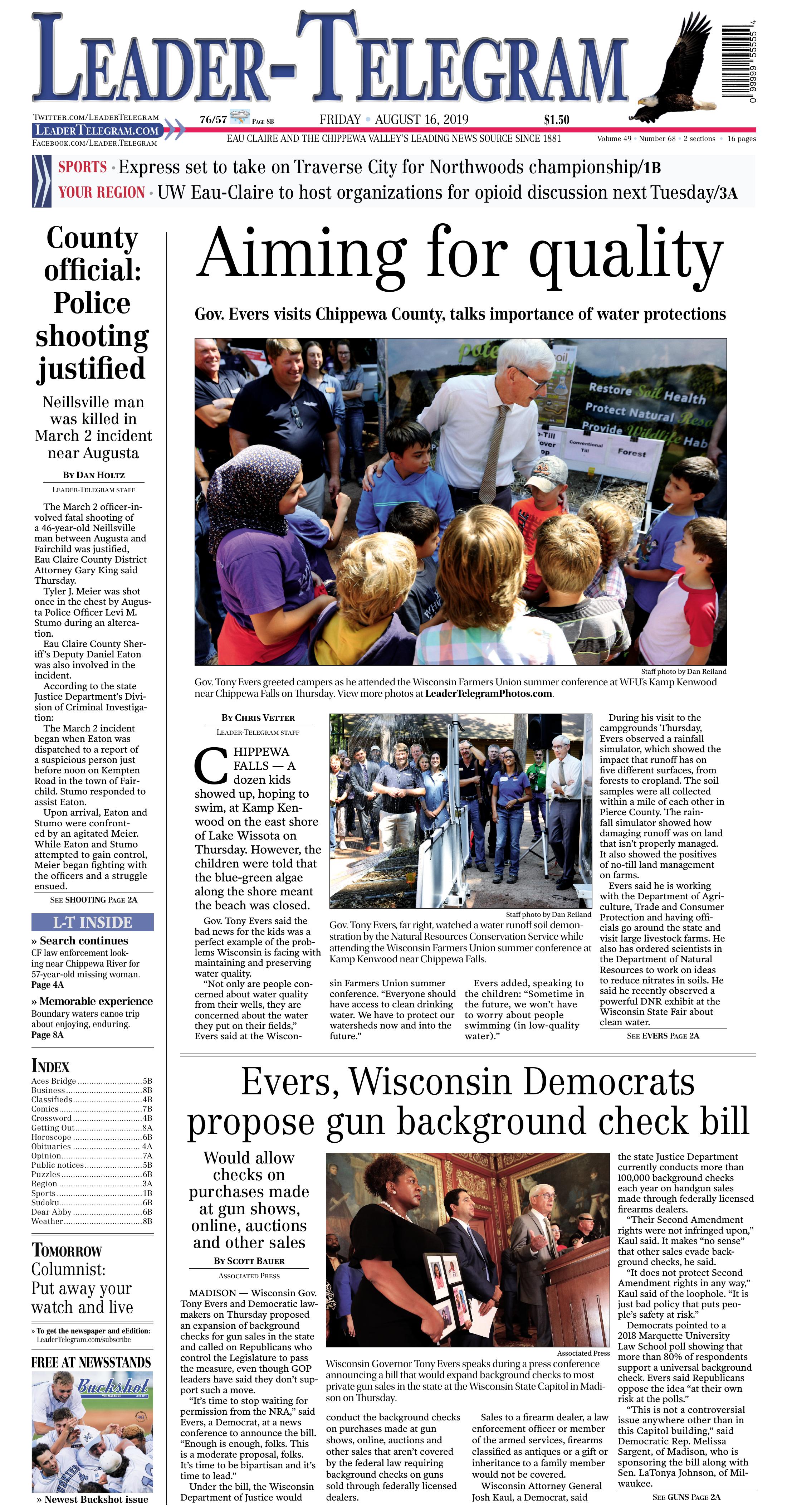