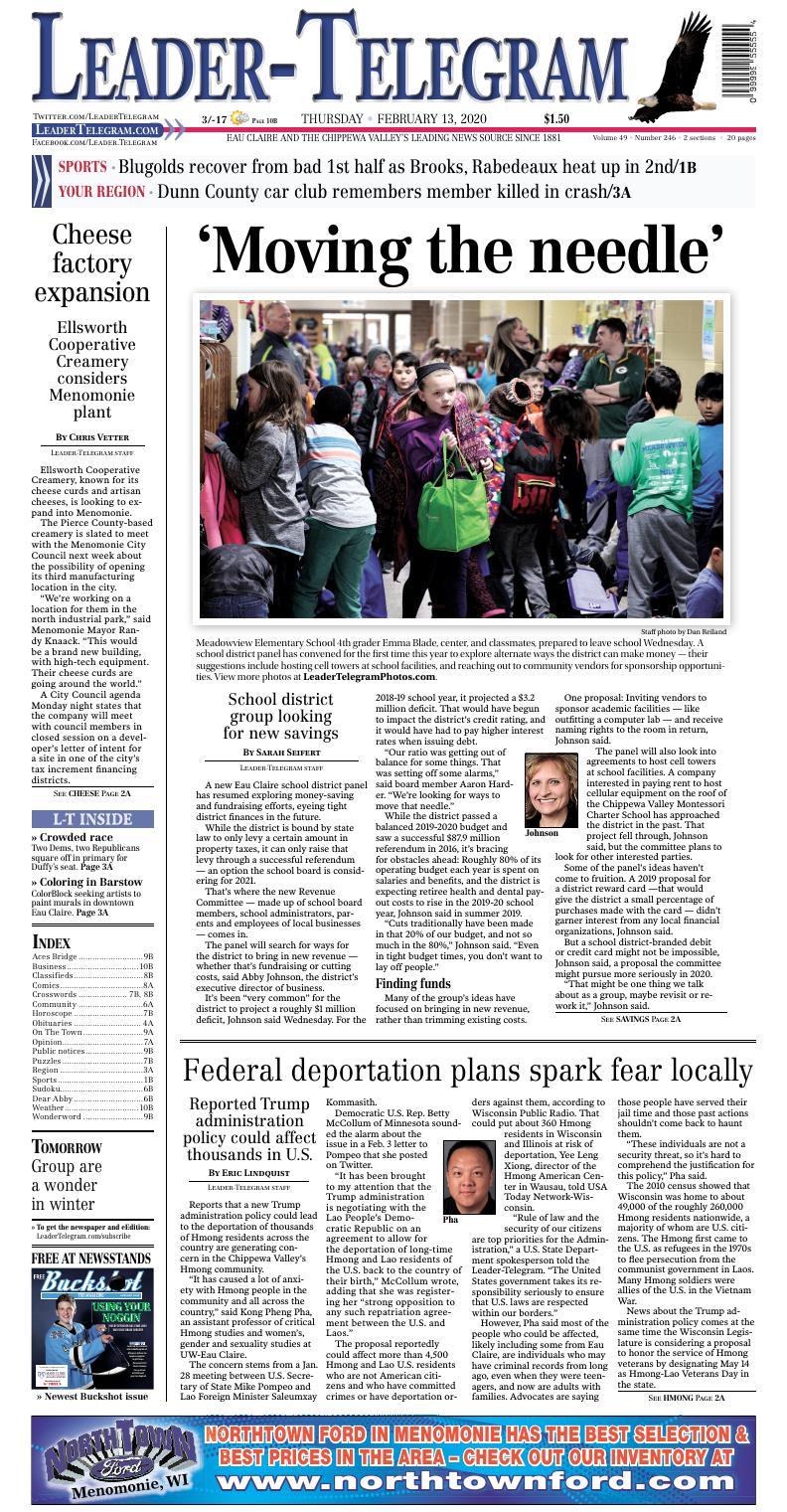 Meadowview Elementary School 4th grader Emma Blade, center, and classmates, prepared to leave school Wednesday. A school district panel has convened for the first time this year to explore alternate ways the district can make money — their suggestions include hosting cell towers at school facilities, and reaching out to community vendors for sponsorship opportunities. View more photos at LeaderTelegramPhotos.com.

While the district is bound by state law to only levy a certain amount in property taxes, it can only raise that levy through a successful referendum — an option the school board is considering for 2021.

That’s where the new Revenue Committee — made up of school board members, school administrators, parents and employees of local businesses — comes in.

The panel will search for ways for the district to bring in new revenue — whether that’s fundraising or cutting costs, said Abby Johnson, the district’s executive director of business.

“Our ratio was getting out of balance for some things. That was setting off some alarms,” said board member Aaron Harder. “We’re looking for ways to move that needle.”

While the district passed a balanced 2019-2020 budget and saw a successful $87.9 million referendum in 2016, it’s bracing for obstacles ahead: Roughly 80% of its operating budget each year is spent on salaries and benefits, and the district is expecting retiree health and dental payout costs to rise in the 2019-20 school year, Johnson said in summer 2019.

“Cuts traditionally have been made in that 20% of our budget, and not so much in the 80%,” Johnson said. “Even in tight budget times, you don’t want to lay off people.”

Many of the group’s ideas have focused on bringing in new revenue, rather than trimming existing costs.

One proposal: Inviting vendors to sponsor academic facilities — like outfitting a computer lab — and receive naming rights to the room in return, Johnson said.

The panel will also look into agreements to host cell towers at school facilities. A company interested in paying rent to host cellular equipment on the roof of the Chippewa Valley Montessori Charter School has approached the district in the past. That project fell through, Johnson said, but the committee plans to look for other interested parties.

Some of the panel’s ideas haven’t come to fruition. A 2019 proposal for a district reward card —that would give the district a small percentage of purchases made with the card — didn’t garner interest from any local financial organizations, Johnson said.

But a school district-branded debit or credit card might not be impossible, Johnson said, a proposal the committee might pursue more seriously in 2020.

“That might be one thing we talk about as a group, maybe revisit or rework it,” Johnson said.

The committee itself cannot approve any proposals, but can explore, research and recommend them to the school board.

Some of the panel’s recommendations have already been approved. The district last year hiked fees for people to rent its facilities, like gymnasiums, classrooms or auditoriums. For for-profit groups or people, the fees now sit at $20 per hour to rent a classroom, $120 per hour to rent North High School’s east gym and $224 per hour for the Memorial High School auditorium for a minimum of four hours. (Fees are halved for nonprofit groups, and eliminated completely for district-affiliated groups or groups made up primarily of Eau Claire students.)

It’s too early to tell if upping rental fees will result in profit for the district, Johnson said: “We do want to be competitive, but don’t want to create barriers for people to use our facilities.”

The district also began partnering with Amazon in a program that allows the district to claim a small amount of money for Amazon purchases when people visit the site through a specific link on the district’s website.

Another successful proposal is a plan to charge child care organizations $10 per day to use school facilities. That change will take effect July 1, Johnson said, although she expects the organizations to raise child care costs to cover the increase.

“When this committee was put together, we knew we weren’t going to raise $3 million today,” Johnson said. “It’s very much a long-term goal. You developed these ideas and work with them.”

Reports that a new Trump administration policy could lead to the deportation of thousands of Hmong residents across the country are generating concern in the Chippewa Valley’s Hmong community.

“It has caused a lot of anxiety with Hmong people in the community and all across the country,” said Kong Pheng Pha, an assistant professor of critical Hmong studies and women’s, gender and sexuality studies at UW-Eau Claire.

The concern stems from a Jan. 28 meeting between U.S. Secretary of State Mike Pompeo and Lao Foreign Minister Saleumxay Kommasith.

Democratic U.S. Rep. Betty McCollum of Minnesota sounded the alarm about the issue in a Feb. 3 letter to Pompeo that she posted on Twitter.

“It has been brought to my attention that the Trump administration is negotiating with the Lao People’s Democratic Republic on an agreement to allow for the deportation of long-time Hmong and Lao residents of the U.S. back to the country of their birth,” McCollum wrote, adding that she was registering her “strong opposition to any such repatriation agreement between the U.S. and Laos.”

The proposal reportedly could affect more than 4,500 Hmong and Lao U.S. residents who are not American citizens and who have committed crimes or have deportation orders against them, according to Wisconsin Public Radio. That could put about 360 Hmong residents in Wisconsin and Illinois at risk of deportation, Yee Leng Xiong, director of the Hmong American Center in Wausau, told USA Today Network-Wisconsin.

“Rule of law and the security of our citizens are top priorities for the Administration,” a U.S. State Department spokesperson told the Leader-Telegram. “The United States government takes its responsibility seriously to ensure that U.S. laws are respected within our borders.”

However, Pha said most of the people who could be affected, likely including some from Eau Claire, are individuals who may have criminal records from long ago, even when they were teenagers, and now are adults with families. Advocates are saying those people have served their jail time and those past actions shouldn’t come back to haunt them.

“These individuals are not a security threat, so it’s hard to comprehend the justification for this policy,” Pha said.

The 2010 census showed that Wisconsin was home to about 49,000 of the roughly 260,000 Hmong residents nationwide, a majority of whom are U.S. citizens. The Hmong first came to the U.S. as refugees in the 1970s to flee persecution from the communist government in Laos. Many Hmong soldiers were allies of the U.S. in the Vietnam War.

News about the Trump administration policy comes at the same time the Wisconsin Legislature is considering a proposal to honor the service of Hmong veterans by designating May 14 as Hmong-Lao Veterans Day in the state.

McCollum called the policy “unconscionable” and criticized it as “a direct attack on my constituents and their family members.”

“Any deportation of Hmong and Lao refugees residing in the U.S. to Laos will tear families apart while putting those individuals at risk in a country that has never been their home,” McCollum continued.

Rep. Ron Kind, D-La Crosse, said he takes the reports seriously and sent a letter to Pompeo asking for more clarity on the policy.

“Thousands of Hmong and Laotian veterans fled to the US in the 1970s after fighting alongside the US in the Vietnam War, and I have personally met with many of these veterans throughout my district,” Kind said in a statement. “With ongoing reports of serious human rights abuses in Laos cited in the State Department’s own reports to Congress, I will oppose the Administration moving forward with any plan that threatens to put any of these individuals, or their families, in harm’s way.”

“Reports out of Laos show that the government is committing human rights abuses against Hmong people there. There are reports of Hmong hiding out in jungles and being hunted,” Pha said. “People are scared and don’t want to go back to a government that will persecute them.”

The State Department spokesperson said the U.S. government’s position “remains that every country has an international legal obligation to accept all of its nationals whom another country seeks to remove, expel, or deport. The essence of this legal position has been consistent over multiple administrations.”

The U.S. and Lao governments are in constant dialogue regarding Lao nationals who are subject to deportation, the spokesperson said, adding that the U.S. is funding a reintegration program in Laos for those who need extra assistance.

Ellsworth Cooperative Creamery, known for its cheese curds and artisan cheeses, is looking to expand into Menomonie.

The Pierce County-based creamery is slated to meet with the Menomonie City Council next week about the possibility of opening its third manufacturing location in the city.

“We’re working on a location for them in the north industrial park,” said Menomonie Mayor Randy Knaack. “This would be a brand new building, with high-tech equipment. Their cheese curds are going around the world.”

A City Council agenda Monday night states that the company will meet with council members in closed session on a developer’s letter of intent for a site in one of the city’s tax increment financing districts.

“We’re working on pulling a plan together,” Knaack said. “We’d love to have them. It would be a great addition to have a cheesemaker in Menomonie. We don’t have a lot of details yet.”

Ellsworth Cooperative Creamery already has a second location in Comstock, along with their main site in Ellsworth.

“We’re looking at them as having manufacturing, as well as a cheese retail shop,” Knaack said. “They are looking at how big of a space they need.”

Paul Bauer, Ellsworth Cooperative Creamery president, declined to comment Wednesday, saying he wanted to get through the meeting Monday first. Knaack said he has already met with Bauer and came away impressed with the plans.

According to the company’s website, the creamery produces more than 280 varieties of cheese between its two locations. In 1984, Gov. Anthony Earl bestowed Ellsworth as the “Cheese Curd Capital of Wisconsin.” The cooperative has more than 300 dairy farm families. 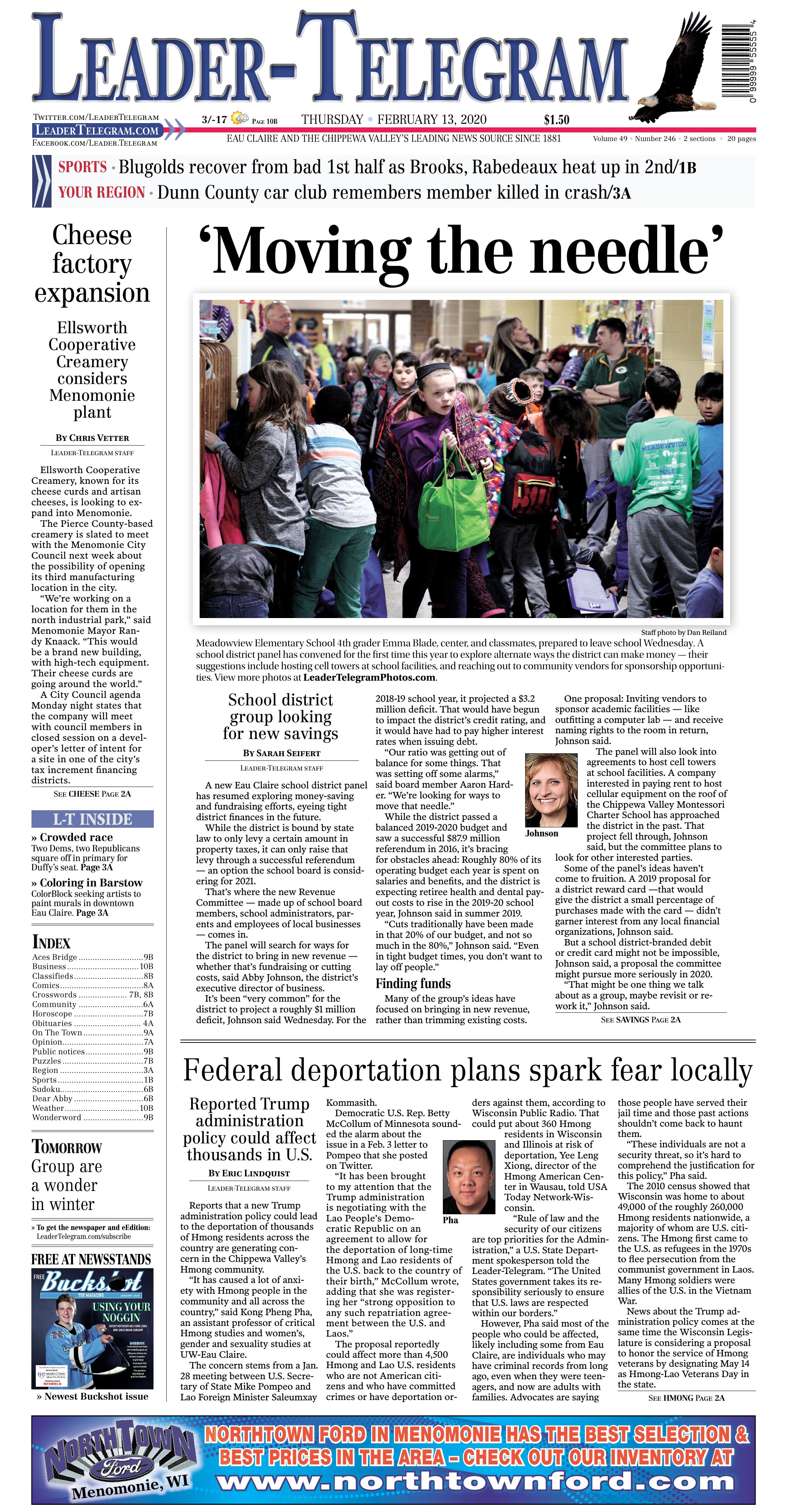