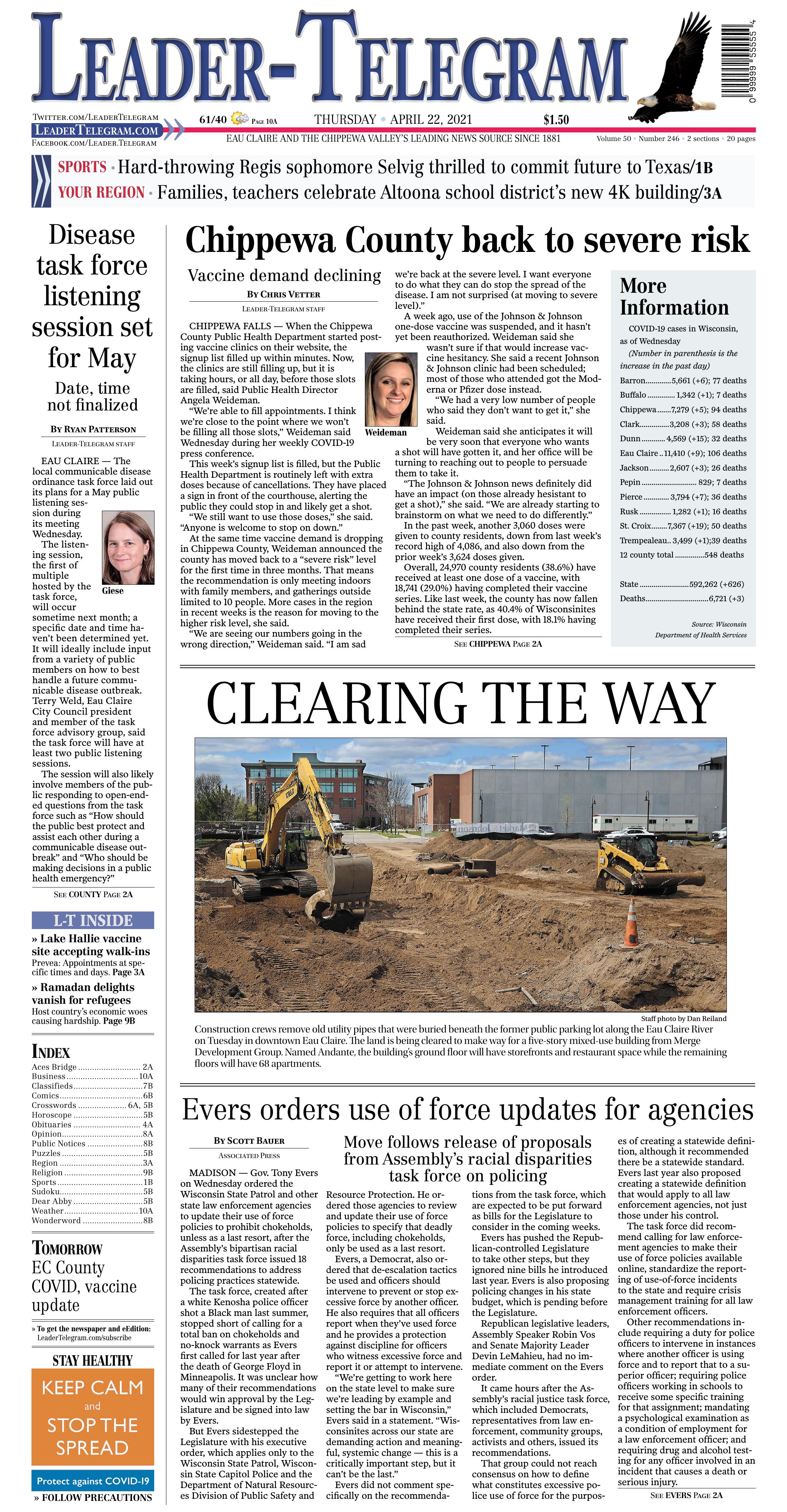 CHIPPEWA FALLS — When the Chippewa County Public Health Department started posting vaccine clinics on their website, the signup list filled up within minutes. Now, the clinics are still filling up, but it is taking hours, or all day, before those slots are filled, said Public Health Director Angela Weideman.

“We’re able to fill appointments. I think we’re close to the point where we won’t be filling all those slots,” Weideman said Wednesday during her weekly COVID-19 press conference.

This week’s signup list is filled, but the Public Health Department is routinely left with extra doses because of cancellations. They have placed a sign in front of the courthouse, alerting the public they could stop in and likely get a shot.

“We still want to use those doses,” she said. “Anyone is welcome to stop on down.”

At the same time vaccine demand is dropping in Chippewa County, Weideman announced the county has moved back to a “severe risk” level for the first time in three months. That means the recommendation is only meeting indoors with family members, and gatherings outside limited to 10 people. More cases in the region in recent weeks is the reason for moving to the higher risk level, she said.

“We are seeing our numbers going in the wrong direction,” Weideman said. “I am sad we’re back at the severe level. I want everyone to do what they can do stop the spread of the disease. I am not surprised (at moving to severe level).”

A week ago, use of the Johnson & Johnson one-dose vaccine was suspended, and it hasn’t yet been reauthorized. Weideman said she wasn’t sure if that would increase vaccine hesitancy. She said a recent Johnson & Johnson clinic had been scheduled; most of those who attended got the Moderna or Pfizer dose instead.

“We had a very low number of people who said they don’t want to get it,” she said.

Weideman said she anticipates it will be very soon that everyone who wants a shot will have gotten it, and her office will be turning to reaching out to people to persuade them to take it.

“The Johnson & Johnson news definitely did have an impact (on those already hesistant to get a shot),” she said. “We are already starting to brainstorm on what we need to do differently.”

In the past week, another 3,060 doses were given to county residents, down from last week’s record high of 4,086, and also down from the prior week’s 3,624 doses given.

Weideman added that for the third straight week, no Chippewa County residents are hospitalized with virus-related symptoms. However, she cautioned that is not a reason for people to let their guard down.

“We have to be very aware of what is happening around us,” she said. “States to the east and west of use are seeing higher numbers of COVID, and higher hospitalization. They are seeing younger people dying. Hopefully, that doesn’t happen in Chippewa County.” 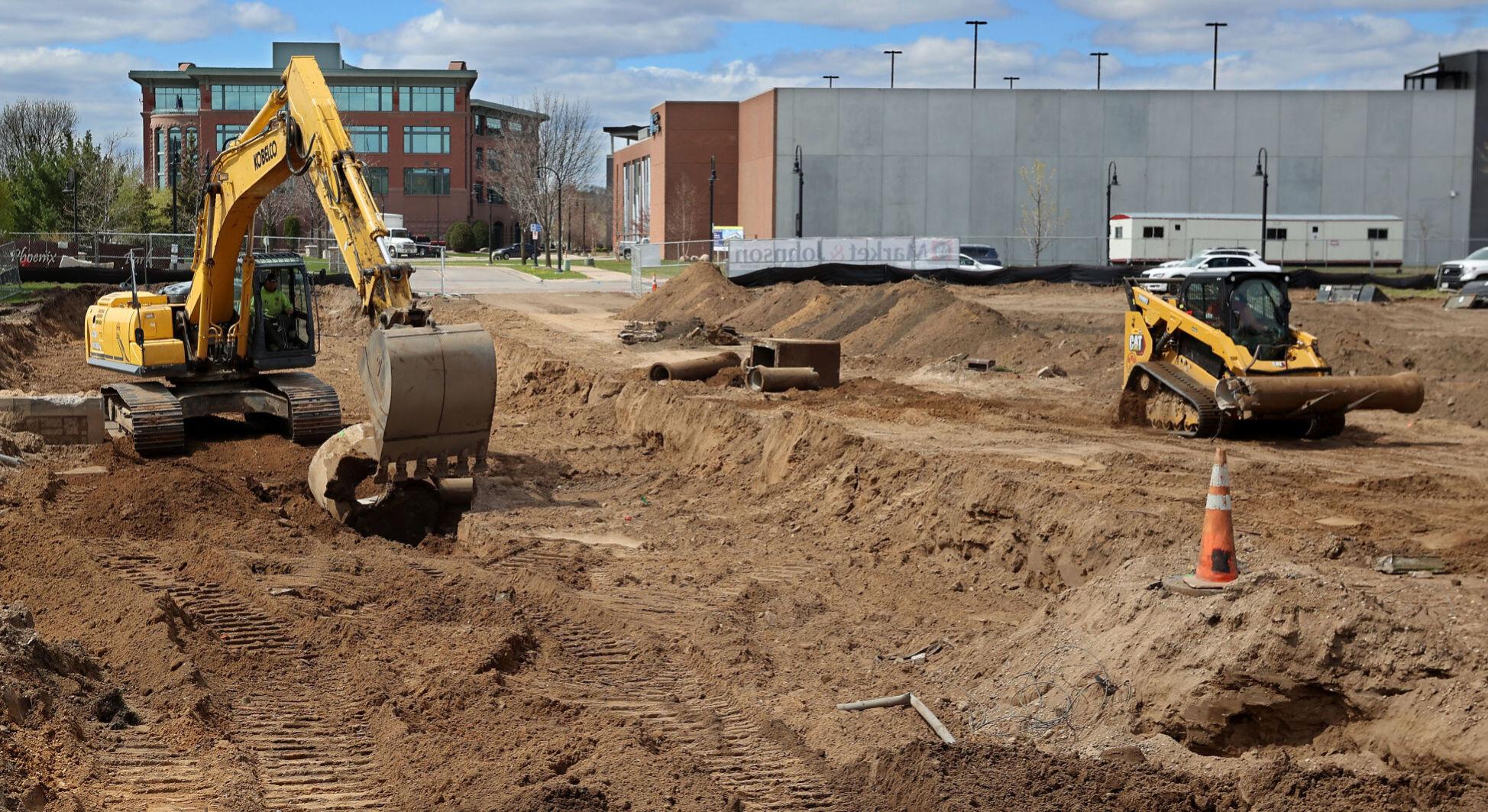 Construction crews remove old utility pipes that were buried beneath the former public parking lot along the Eau Claire River on Tuesday in downtown Eau Claire. The land is being cleared to make way for a five-story mixed-use building from Merge Development Group. Named Andante, the building’s ground floor will have storefronts and restaurant space while the remaining floors will have 68 apartments.

MADISON — Gov. Tony Evers on Wednesday ordered the Wisconsin State Patrol and other state law enforcement agencies to update their use of force policies to prohibit chokeholds, unless as a last resort, after the Assembly’s bipartisan racial disparities task force issued 18 recommendations to address policing practices statewide.

The task force, created after a white Kenosha police officer shot a Black man last summer, stopped short of calling for a total ban on chokeholds and no-knock warrants as Evers first called for last year after the death of George Floyd in Minneapolis. It was unclear how many of their recommendations would win approval by the Legislature and be signed into law by Evers.

But Evers sidestepped the Legislature with his executive order, which applies only to the Wisconsin State Patrol, Wisconsin State Capitol Police and the Department of Natural Resources Division of Public Safety and Resource Protection. He ordered those agencies to review and update their use of force policies to specify that deadly force, including chokeholds, only be used as a last resort.

Evers, a Democrat, also ordered that de-escalation tactics be used and officers should intervene to prevent or stop excessive force by another officer. He also requires that all officers report when they’ve used force and he provides a protection against discipline for officers who witness excessive force and report it or attempt to intervene.

“We’re getting to work here on the state level to make sure we’re leading by example and setting the bar in Wisconsin,” Evers said in a statement. “Wisconsinites across our state are demanding action and meaningful, systemic change — this is a critically important step, but it can’t be the last.”

Evers did not comment specifically on the recommendations from the task force, which are expected to be put forward as bills for the Legislature to consider in the coming weeks.

Evers has pushed the Republican-controlled Legislature to take other steps, but they ignored nine bills he introduced last year. Evers is also proposing policing changes in his state budget, which is pending before the Legislature.

It came hours after the Assembly’s racial justice task force, which included Democrats, representatives from law enforcement, community groups, activists and others, issued its recommendations.

The task force did recommend calling for law enforcement agencies to make their use of force policies available online, standardize the reporting of use-of-force incidents to the state and require crisis management training for all law enforcement officers.

Other recommendations include requiring a duty for police officers to intervene in instances where another officer is using force and to report that to a superior officer; requiring police officers working in schools to receive some specific training for that assignment; mandating a psychological examination as a condition of employment for a law enforcement officer; and requiring drug and alcohol testing for any officer involved in an incident that causes a death or serious injury.

The task force called for collecting data from federal, state and local law enforcement agencies to determine how often no-knock warrants are used. And while it said chokeholds should be banned, it said they should still be allowed in “life-threatening situations or in self defense.”

Republican Assembly Majority Leader Jim Steineke, co-chair of the task force, said in an interview on Tuesday that he hoped to move “as quick as practicable” on drafting bills based on the recommendations, with public hearings next month and June votes in the Assembly. The bills must also pass the GOP-controlled Senate and be signed by Evers to become law.

The panel’s other co-chair, Democratic Rep. Shelia Stubbs, had been critical of Republican leaders for not taking up bills to address police practices and racial disparities. But Stubbs, who is Black, said she was optimistic the recommendations would get traction.

“We just gotta get to that place where we get something done for the people across the state,” Stubbs said.

Vos created the task force in August, after the Legislature ignored nine proposals Evers put forward in June and after a white Kenosha police officer shot Jacob Blake, who is Black, leaving him paralyzed.

Steineke, of Kaukauna, took heat earlier this year when emails revealed he thought the job of co-chairing the task force was a “political loser.” Steineke said in an email to Vos that the task force provided a chance to “show how Evers could get things done if his admin weren’t so damned political.”

EAU CLAIRE — The local communicable disease ordinance task force laid out its plans for a May public listening session during its meeting Wednesday.

The listening session, the first of multiple hosted by the task force, will occur sometime next month; a specific date and time haven’t been determined yet. It will ideally include input from a variety of public members on how to best handle a future communicable disease outbreak. Terry Weld, Eau Claire City Council president and member of the task force advisory group, said the task force will have at least two public listening sessions.

The session will also likely involve members of the public responding to open-ended questions from the task force such as “How should the public best protect and assist each other during a communicable disease outbreak” and “Who should be making decisions in a public health emergency?”

The virtual listening session will not be geared toward prior issues related to the COVID-19 pandemic, as the task force has a forward-looking mission focusing on dealing with future communicable diseases. Members admitted that is a challenging proposition when the current pandemic is still occurring and no one knows what the next outbreak will entail.

“It is very difficult to do this work right now,” said Lieske Giese, Eau Claire City-County Health Department director and member of the task force advisory group. “It’s tough, as raw and as emotional as this pandemic has been to everybody, to pause and think about it in a more concrete way.”

“We’re basing an ordinance based on what has gone before us, and that may not be coming up next,” Middleton said. “That sounds like a pretty high hurdle.”

Marisa Stanley, task force member and Health Department assistant director and epidemiologist, said that is why it is important, in future outbreaks, “that we have flexibility in being able to tailor whatever we do to what that disease is so that we can make the best decisions to protect the public.”

The task force hasn’t evaluated current language in the existing city and county communicable disease ordinances. It will “begin to tackle the ordinances” in meetings after the public listening session, said Dan Stier, task force facilitator.

“This is an issue people are paying attention to, so I think there will be input on this,” Rogers said.