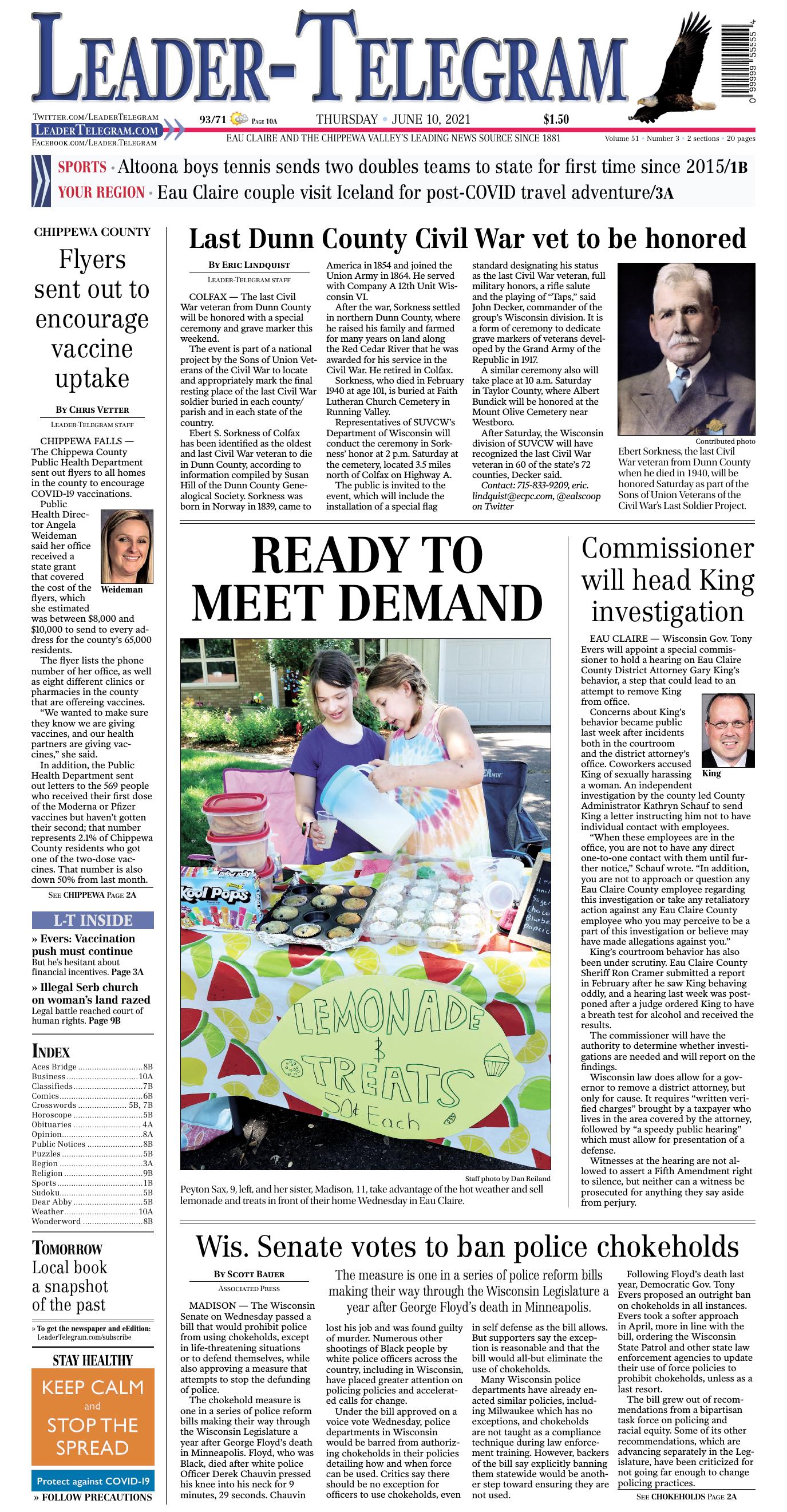 Ebert Sorkness, the last Civil War veteran from Dunn County when he died in 1940, will be honored Saturday as part of the Sons of Union Veterans of the Civil War’s Last Soldier Project.

COLFAX — The last Civil War veteran from Dunn County will be honored with a special ceremony and grave marker this weekend.

The event is part of a national project by the Sons of Union Veterans of the Civil War to locate and appropriately mark the final resting place of the last Civil War soldier buried in each county/parish and in each state of the country.

Ebert S. Sorkness of Colfax has been identified as the oldest and last Civil War veteran to die in Dunn County, according to information compiled by Susan Hill of the Dunn County Genealogical Society. Sorkness was born in Norway in 1839, came to America in 1854 and joined the Union Army in 1864. He served with Company A 12th Unit Wisconsin VI.

After the war, Sorkness settled in northern Dunn County, where he raised his family and farmed for many years on land along the Red Cedar River that he was awarded for his service in the Civil War. He retired in Colfax.

Sorkness, who died in February 1940 at age 101, is buried at Faith Lutheran Church Cemetery in Running Valley.

Representatives of SUVCW’s Department of Wisconsin will conduct the ceremony in Sorkness’ honor at 2 p.m. Saturday at the cemetery, located 3.5 miles north of Colfax on Highway A.

The public is invited to the event, which will include the installation of a special flag standard designating his status as the last Civil War veteran, full military honors, a rifle salute and the playing of “Taps,” said John Decker, commander of the group’s Wisconsin division. It is a form of ceremony to dedicate grave markers of veterans developed by the Grand Army of the Republic in 1917.

A similar ceremony also will take place at 10 a.m. Saturday in Taylor County, where Albert Bundick will be honored at the Mount Olive Cemetery near Westboro.

After Saturday, the Wisconsin division of SUVCW will have recognized the last Civil War veteran in 60 of the state’s 72 counties, Decker said. 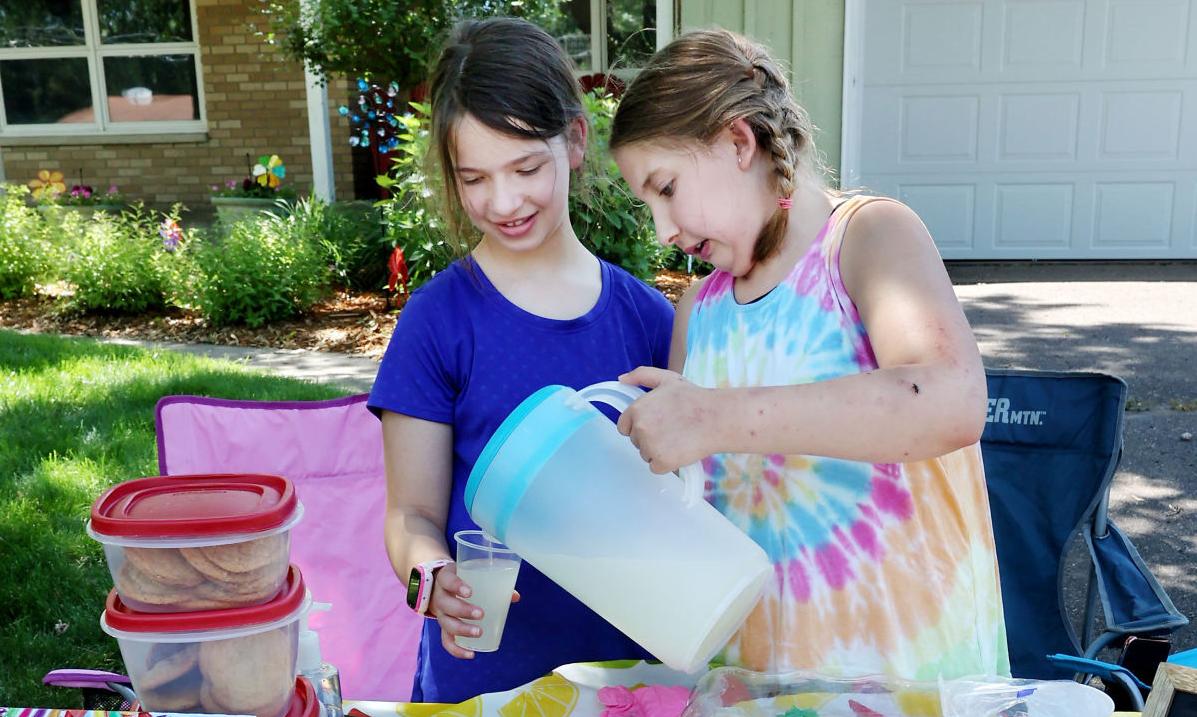 Peyton Sax, 9, left, and her sister, Madison, 11, take advantage of the hot weather and sell lemonade and treats in front of their home Wednesday in Eau Claire.

MADISON — The Wisconsin Senate on Wednesday passed a bill that would prohibit police from using chokeholds, except in life-threatening situations or to defend themselves, while also approving a measure that attempts to stop the defunding of police.

The chokehold measure is one in a series of police reform bills making their way through the Wisconsin Legislature a year after George Floyd’s death in Minneapolis. Floyd, who was Black, died after white police Officer Derek Chauvin pressed his knee into his neck for 9 minutes, 29 seconds. Chauvin lost his job and was found guilty of murder. Numerous other shootings of Black people by white police officers across the country, including in Wisconsin, have placed greater attention on policing policies and accelerated calls for change.

Under the bill approved on a voice vote Wednesday, police departments in Wisconsin would be barred from authorizing chokeholds in their policies detailing how and when force can be used. Critics say there should be no exception for officers to use chokeholds, even in self defense as the bill allows. But supporters say the exception is reasonable and that the bill would all-but eliminate the use of chokeholds.

Many Wisconsin police departments have already enacted similar policies, including Milwaukee which has no exceptions, and chokeholds are not taught as a compliance technique during law enforcement training. However, backers of the bill say explicitly banning them statewide would be another step toward ensuring they are not used.

Following Floyd’s death last year, Democratic Gov. Tony Evers proposed an outright ban on chokeholds in all instances. Evers took a softer approach in April, more in line with the bill, ordering the Wisconsin State Patrol and other state law enforcement agencies to update their use of force policies to prohibit chokeholds, unless as a last resort.

The bill grew out of recommendations from a bipartisan task force on policing and racial equity. Some of its other recommendations, which are advancing separately in the Legislature, have been criticized for not going far enough to change policing practices.

The Senate also passed a bill Wednesday supported by Republicans and police and opposed by Democrats and local governments that attempts to stop efforts to defund police.

It would mandate that any municipality that decreases funding for police would receive an equal cut in state aid. The bill is an attempt by conservatives to stop those who want to take money away from police departments, sometimes to use for other social services that may not require a law enforcement intervention.

Under the bill, municipalities that do not cut their police budgets would receive more in state aid. Police departments with fewer than 30 officers would be exempt.

Republican Sen. Van Wanggaard, the bill sponsor and a retired police officer from Racine, said the proposal was about keeping cities including Milwaukee safe and that it would stop indiscriminate cutting of police officers and keep communities safe.

Democratic critics said the measure was an overreach and wouldn’t make cities safer, and that the state was interfering with the right of local governments to make the best decisions for their communities.

“This is shameful,” said Democratic Sen. Bob Wirch, of Kenosha.

Police budgets are disproportionately large, which is fueling the call for their funding to be cut, said Democratic Sen. La Tonya Johnson, of Milwaukee.

Evers is expected to veto the bill should it pass the Assembly.

The Senate passed a third bill, on a bipartisan 30-2 vote, that has widespread support and requires law enforcement agencies to specify when use of force must be reported, how to report it and mandates that officers who engage or observe use of force to report it. It also prohibits disciplining an officer for reporting a violation of the agency’s use of force policy.

CHIPPEWA FALLS — The Chippewa County Public Health Department sent out flyers to all homes in the county to encourage COVID-19 vaccinations.

Public Health Director Angela Weideman said her office received a state grant that covered the cost of the flyers, which she estimated was between $8,000 and $10,000 to send to every address for the county’s 65,000 residents.

The flyer lists the phone number of her office, as well as eight different clinics or pharmacies in the county that are offereing vaccines.

In addition, the Public Health Department sent out letters to the 569 people who received their first dose of the Moderna or Pfizer vaccines but haven’t gotten their second; that number represents 2.1% of Chippewa County residents who got one of the two-dose vaccines. That number is also down 50% from last month.

“We did have a few (letters) returned. Many people did communicate back to us that they did get a second dose,” she said.

In the past week, only 780 COVID-19 vaccinations were given, the lowest number since vaccinations started, and down from 925 doses a week ago, and also down from 1,339 doses two weeks ago.

One of the largest challenges her office has faced is getting the county’s Black population vaccinated. Only 112 Black residents out of an estimated 1,400 residents (8.1%) have received a dose. In comparison, 24.8% of the state’s Black population has received a shot. Weideman said her office has two new employees beginning next week who will be working on plans to work on community health.

“We definitely would like to see that (Black vaccination percentage) go up,” she said.

The Public Health Department will be giving both the Moderna and Johnson & Johnson vaccines in their office at the courthouse today; Weideman still encourages signing up on their website, but walk-ins are welcome. They also continue to hold pop-up clinics. On Friday, a Johnson & Johnson clinic will be held 10 a.m.-4 p.m. at the Bloomer/New Auburn Food Pantry in Bloomer. On Tuesday, the Open Door Clinic in Chippewa Falls will hold a clinic offering both the Johnson & Johnson and Moderna vaccines, 5-7 p.m.

No new virus-related deaths were reported; the county’s total remains at 94, with just one death since March 2. However, three county residents are currently hospitalized; no one was hospitalized a week ago. Weideman said she was “definitely concerned” about having three people now hospitalized when there have been so few new cases reported in recent weeks.

For the seventh straight week, the county remains at a “high risk level,” which includes a recommendation of no more than 15 people gathering indoors and 50 people outdoors. In early April, the county had climbed back to the “severe risk level” for one week before that dropped back to the high risk status. Weideman said the county is close to dropping to the “moderate risk level,” but there have been three outbreaks in the area, keeping the county from reaching that lower risk rating.

In another sign that the pandemic is waning, Weideman announced that this was the final weekly press conference; future meetings will be held on an as-needed basis.

“While it’s not over, I’m happy to see things are moving in the right direction,” she said.

EAU CLAIRE — Wisconsin Gov. Tony Evers will appoint a special commissioner to hold a hearing on Eau Claire County District Attorney Gary King’s behavior, a step that could lead to an attempt to remove King from office.

Concerns about King’s behavior became public last week after incidents both in the courtroom and the district attorney’s office. Coworkers accused King of sexually harassing a woman. An independent investigation by the county led County Administrator Kathryn Schauf to send King a letter instructing him not to have individual contact with employees.

“When these employees are in the office, you are not to have any direct one-to-one contact with them until further notice,” Schauf wrote. “In addition, you are not to approach or question any Eau Claire County employee regarding this investigation or take any retaliatory action against any Eau Claire County employee who you may perceive to be a part of this investigation or believe may have made allegations against you.”

King’s courtroom behavior has also been under scrutiny. Eau Claire County Sheriff Ron Cramer submitted a report in February after he saw King behaving oddly, and a hearing last week was postponed after a judge ordered King to have a breath test for alcohol and received the results.

The commissioner will have the authority to determine whether investigations are needed and will report on the findings.

Wisconsin law does allow for a governor to remove a district attorney, but only for cause. It requires “written verified charges” brought by a taxpayer who lives in the area covered by the attorney, followed by “a speedy public hearing” which must allow for presentation of a defense.

Witnesses at the hearing are not allowed to assert a Fifth Amendment right to silence, but neither can a witness be prosecuted for anything they say aside from perjury.