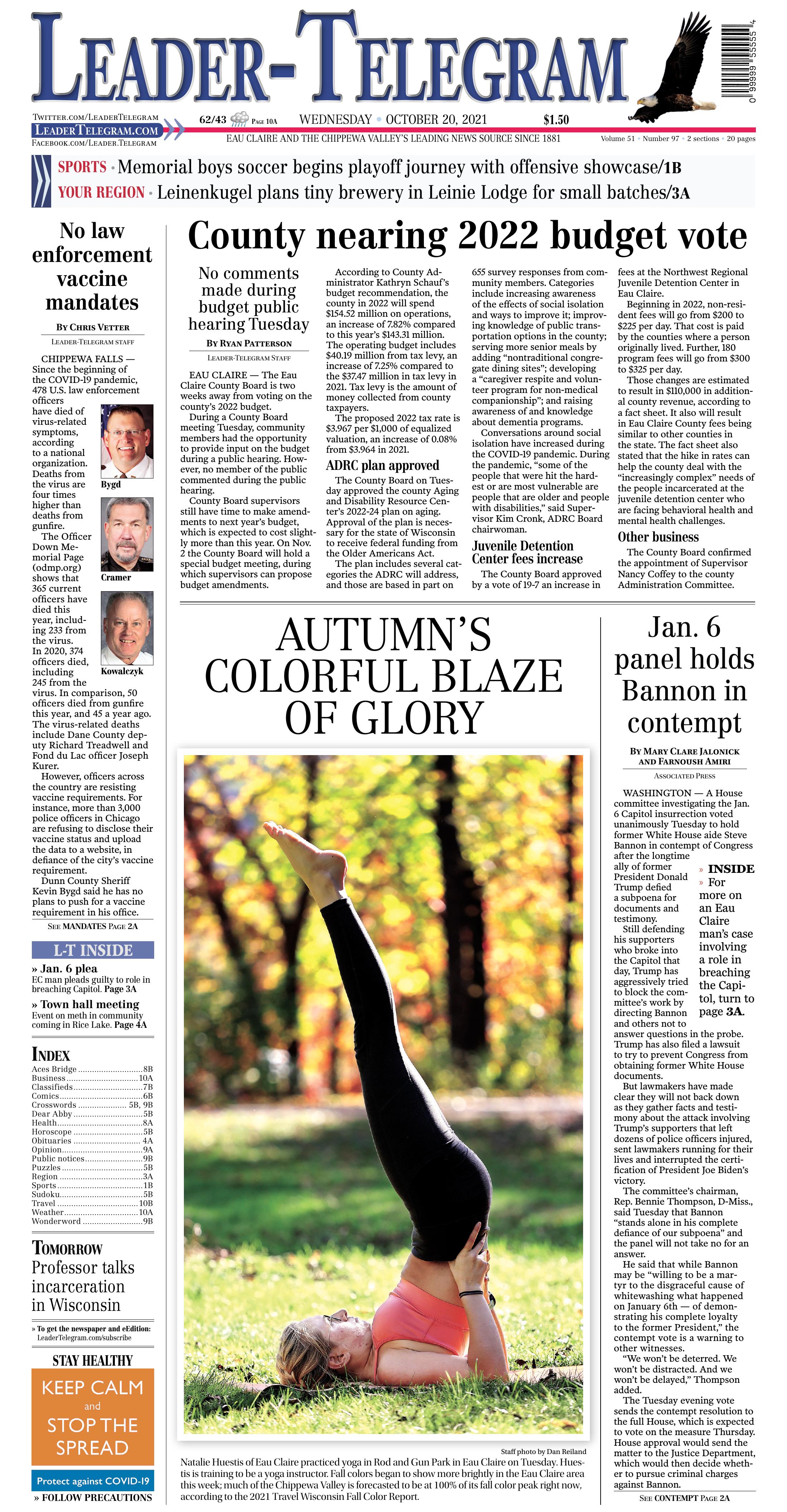 EAU CLAIRE — The Eau Claire County Board is two weeks away from voting on the county’s 2022 budget.

County Board supervisors still have time to make amendments to next year’s budget, which is expected to cost slightly more than this year. On Nov. 2 the County Board will hold a special budget meeting, during which supervisors can propose budget amendments.

According to County Administrator Kathryn Schauf’s budget recommendation, the county in 2022 will spend $154.52 million on operations, an increase of 7.82% compared to this year’s $143.31 million. The operating budget includes $40.19 million from tax levy, an increase of 7.25% compared to the $37.47 million in tax levy in 2021. Tax levy is the amount of money collected from county taxpayers.

The County Board on Tuesday approved the county Aging and Disability Resource Center’s 2022-24 plan on aging. Approval of the plan is necessary for the state of Wisconsin to receive federal funding from the Older Americans Act.

The plan includes several categories the ADRC will address, and those are based in part on 655 survey responses from community members. Categories include increasing awareness of the effects of social isolation and ways to improve it; improving knowledge of public transportation options in the county; serving more senior meals by adding “nontraditional congregate dining sites”; developing a “caregiver respite and volunteer program for non-medical companionship”; and raising awareness of and knowledge about dementia programs.

Conversations around social isolation have increased during the COVID-19 pandemic. During the pandemic, “some of the people that were hit the hardest or are most vulnerable are people that are older and people with disabilities,” said Supervisor Kim Cronk, ADRC Board chairwoman.

The County Board approved by a vote of 19-7 an increase in fees at the Northwest Regional Juvenile Detention Center in Eau Claire.

Those changes are estimated to result in $110,000 in additional county revenue, according to a fact sheet. It also will result in Eau Claire County fees being similar to other counties in the state. The fact sheet also stated that the hike in rates can help the county deal with the “increasingly complex” needs of the people incarcerated at the juvenile detention center who are facing behavioral health and mental health challenges.

The County Board confirmed the appointment of Supervisor Nancy Coffey to the county Administration Committee. 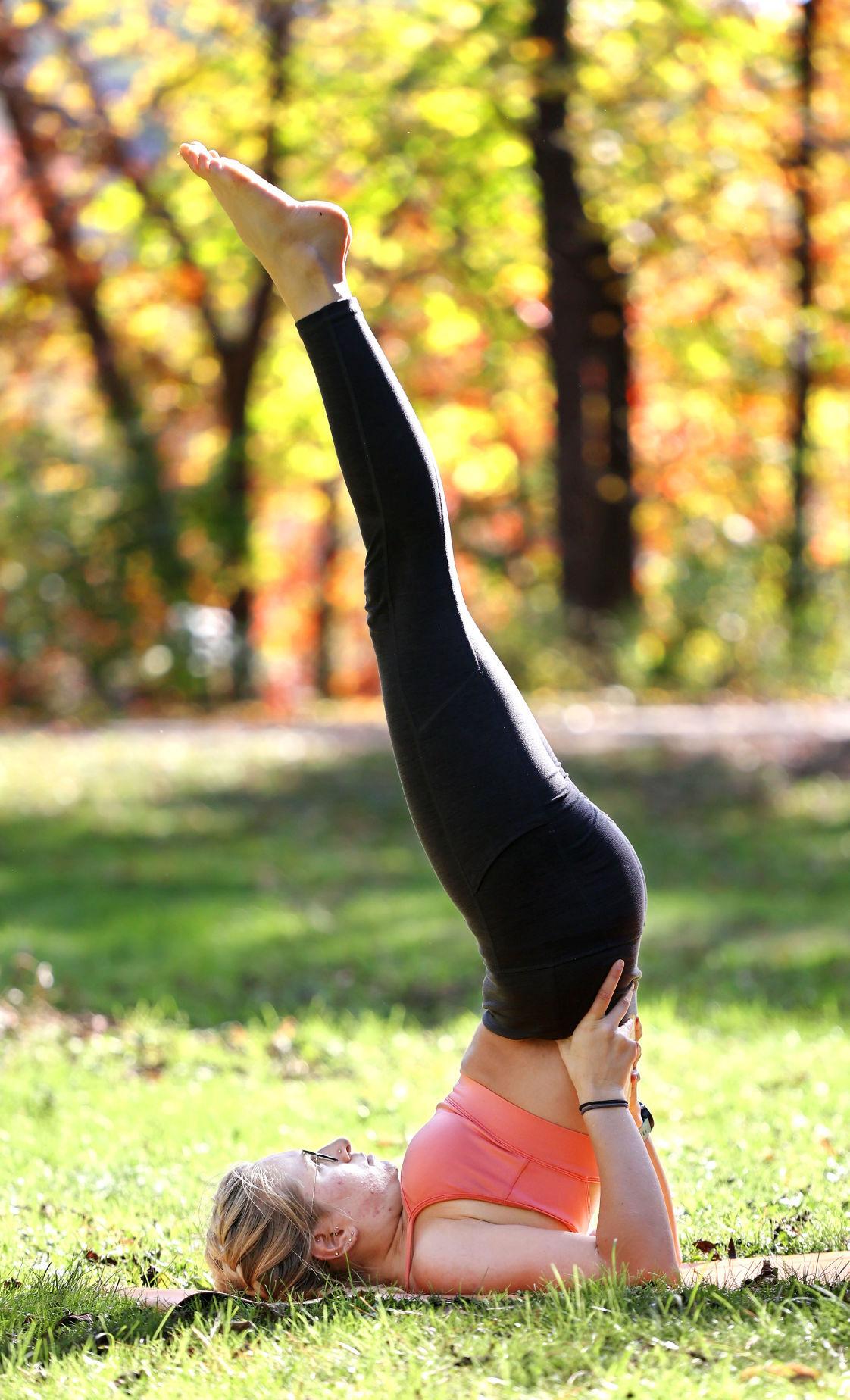 Natalie Huestis of Eau Claire practiced yoga in Rod and Gun Park in Eau Claire on Tuesday. Huestis is training to be a yoga instructor. Fall colors began to show more brightly in the Eau Claire area this week; much of the Chippewa Valley is forecasted to be at 100% of its fall color peak right now, according to the 2021 Travel Wisconsin Fall Color Report.

CHIPPEWA FALLS — Since the beginning of the COVID-19 pandemic, 478 U.S. law enforcement officers have died of virus-related symptoms, according to a national organization. Deaths from the virus are four times higher than deaths from gunfire.

However, officers across the country are resisting vaccine requirements. For instance, more than 3,000 police officers in Chicago are refusing to disclose their vaccine status and upload the data to a website, in defiance of the city’s vaccine requirement.

Dunn County Sheriff Kevin Bygd said he has no plans to push for a vaccine requirement in his office.

“I don’t have a feel for how many of my staff are vaccinated,” Bygd said. “It’s none of my business, and I’ve told them that. And I won’t mandate vaccines; that’s a personal decision.”

Bygd sees the number of officers across the nation willing to leave their jobs rather than submit to a vaccine requirement in their agency, and he fears a similar loss of workers.

“It’s certainly a concern of mine, that I’d lose staff, if the county required it,” Bygd said. “I have a hard enough time now recruiting and retaining staff, it would be just another chink in the armor. They may go elsewhere, to a job without the pressures of law enforcement.”

Eau Claire County Sheriff Ron Cramer, who has 106 employees between jailers, dispatchers, officers and clerical staff, said he hasn’t polled them to get a sense of how many are vaccinated.

“We don’t, because of HIPAA, they don’t have to tell us,” Cramer said. “We encourage it, because of the public contact.”

“We are experiencing staff shortages,” Cramer said. “Everyone around the state is fighting COVID and staffing shortages.”

Instead, Cramer said he is focused on making his workplace a healthy, safe environment.

“The city takes employee health and safety very seriously and has encouraged all employees to get vaccinated and has even hosted on-site vaccination clinics to help facilitate those efforts,” Seltun wrote. “Police officers have been encouraged to get vaccinated along with all other employees. The city has not yet required proof of vaccination or regular testing, but continues to explore all options and is monitoring the possible application of federal vaccine mandates. Current city policy requires that all employees, regardless of vaccination status, wear a mask when inside city buildings (unless alone in their private office) or driving in a city vehicle where another individual is present and physical distancing is not possible.”

“Just in talks with my personnel, I’m guessing better than 60% (are vaccinated),” Kowalczyk said. “I haven’t considered making it a requirement.”

Like Cramer, Kowalczyk said he’s focused on what he can control.

“It’s a positive we’ve not had any COVID cases in the jail,” Kowalczyk said. “I credit that to mask-wearing when they go to the courtroom, and nurses wear them when they come in. The jail is a small enough area, that contamination would spread like wildfire.”

Kowalczyk said he also has a supply of rapid tests, which can provide COVID results within 15 minutes.

(Number in parenthesis is increase in the past day)

Still defending his supporters who broke into the Capitol that day, Trump has aggressively tried to block the committee’s work by directing Bannon and others not to answer questions in the probe. Trump has also filed a lawsuit to try to prevent Congress from obtaining former White House documents.

But lawmakers have made clear they will not back down as they gather facts and testimony about the attack involving Trump’s supporters that left dozens of police officers injured, sent lawmakers running for their lives and interrupted the certification of President Joe Biden’s victory.

The committee’s chairman, Rep. Bennie Thompson, D-Miss., said Tuesday that Bannon “stands alone in his complete defiance of our subpoena” and the panel will not take no for an answer.

He said that while Bannon may be “willing to be a martyr to the disgraceful cause of whitewashing what happened on January 6th — of demonstrating his complete loyalty to the former President,” the contempt vote is a warning to other witnesses.

The Tuesday evening vote sends the contempt resolution to the full House, which is expected to vote on the measure Thursday. House approval would send the matter to the Justice Department, which would then decide whether to pursue criminal charges against Bannon.

The contempt resolution asserts that the former Trump aide and podcast host has no legal standing to rebuff the committee — even as Trump’s lawyer has argued that Bannon should not disclose information because it is protected by the privilege of the former president’s office. The committee noted that Bannon, fired from his White House job in 2017, was a private citizen when he spoke to Trump ahead of the attack. And Trump has not asserted any such executive privilege claims to the panel itself, lawmakers said.

Wyoming Rep. Liz Cheney, one of just two Republicans on the committee, said: “Mr. Bannon’s and Mr. Trump’s privilege arguments do appear to reveal one thing, however: They suggest that President Trump was personally involved in the planning and execution of January 6th. And we will get to the bottom of that.”

The committee says it is pursuing Bannon’s testimony because of his apparent role in the events of Jan. 6, including his communications with Trump ahead of the siege, his efforts to get the former president to focus on Jan. 6, the day Congress certified the presidential vote, and his comments on Jan. 5 that “all hell is going to break loose” the next day.

Bannon “appears to have had multiple roles relevant to this investigation, including his role in constructing and participating in the ‘stop the steal’ public relations effort that motivated the attack” and “his efforts to plan political and other activity in advance of January 6th,” the committee wrote in the resolution recommending contempt.

The Biden White House has rejected Bannon’s claims, with Deputy Counsel Jonathan Su writing Bannon’s lawyer this week to say that “at this point we are not aware of any basis for your client’s refusal to appear for a deposition.” Biden’s judgment that executive privilege is not justified, Su wrote, “applies to your client’s deposition testimony and to any documents your client may possess.”

The committee has also subpoenaed more than a dozen people who helped plan Trump rallies ahead of the siege, and some of them are already turning over documents and giving testimony.

The vote came a day after Trump sued the committee and the National Archives to fight the release of documents the committee has requested. Trump’s lawsuit, filed after Biden said he’d allow the documents’ release, claims that the panel’s August request was overly broad and a “vexatious, illegal fishing expedition.” Trump’s suit seeks to invalidate the entirety of the congressional request, calling it overly broad, unduly burdensome and a challenge to separation of powers. It requests a court injunction to bar the archivist from producing the documents.

The Biden administration, in clearing the documents for release, said the violent siege of the Capitol more than nine months ago was such an extraordinary circumstance that it merited waiving the privilege that usually protects White House communications.