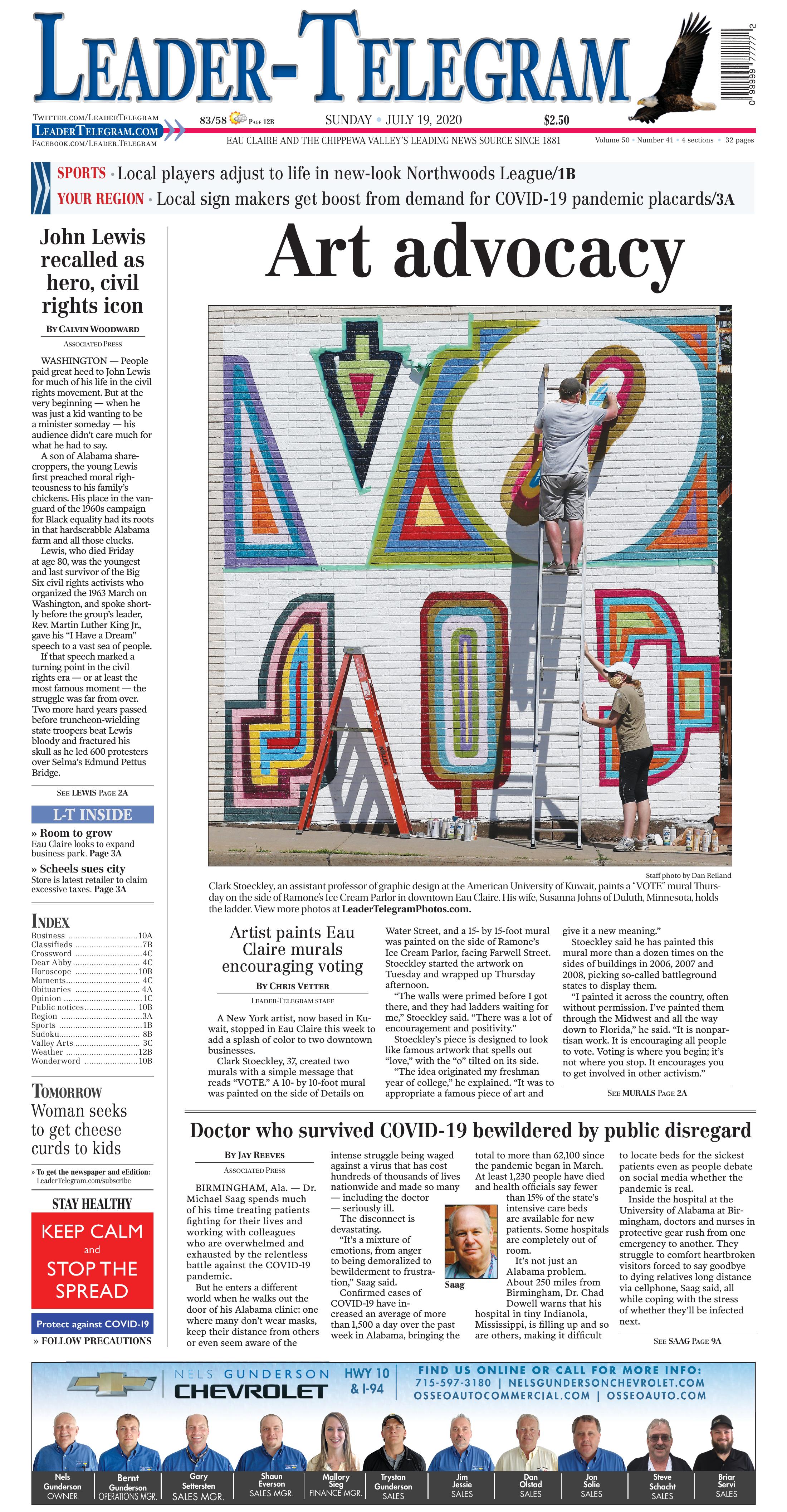 Clark Stoeckley painted this “VOTE” mural last week on the back of Details on Water Street.

Clark Stoeckley, an assistant professor of graphic design at the American University of Kuwait, paints a “VOTE” mural Thursday on the side of Ramone’s Ice Cream Parlor in downtown Eau Claire. His wife, Susanna Johns of Duluth, Minnesota, holds the ladder. View more photos at LeaderTelegramPhotos.com.

A New York artist, now based in Kuwait, stopped in Eau Claire this week to add a splash of color to two downtown businesses.

“The walls were primed before I got there, and they had ladders waiting for me,” Stoeckley said. “There was a lot of encouragement and positivity.”

Stoeckley’s piece is designed to look like famous artwork that spells out “love,” with the “o” tilted on its side.

“The idea originated my freshman year of college,” he explained. “It was to appropriate a famous piece of art and give it a new meaning.”

Stoeckley said he has painted this mural more than a dozen times on the sides of buildings in 2006, 2007 and 2008, picking so-called battleground states to display them.

“I painted it across the country, often without permission. I’ve painted them through the Midwest and all the way down to Florida,” he said. “It is nonpartisan work. It is encouraging all people to vote. Voting is where you begin; it’s not where you stop. It encourages you to get involved in other activism.”

Stoeckley said he retired the project after the November 2008 election.

For the past four years, Stoeckley has taught graphic design at the American University of Kuwait, typically living there more than nine months of the year. However, when the COVID-19 pandemic closed down international travel, Stoeckley and his wife traveled to her hometown of Duluth, Minnesota, where he has spent most of this year waiting for permission to return overseas.

Being in the Midwest, near battleground states, made Stoeckley decide to resurrect his “VOTE” murals.

“It’s like riding a bicycle. I was able to jump right back into it,” he said. “The one at Ramone’s is unlike any I’ve done before, in using colors inside colors.”

Jo Ellen Burke, president of the Eau Claire Public Arts Council, was excited when Stoeckley approached her group about painting the murals in town.

Burke said her group was able to secure agreements with the two businesses to allow murals on their walls.

“We provided the materials and ladders. He provided his paint, and he did it for free,” she said.

The murals are quite visible, she added.

“Ramone’s is a nice location,” Burke said. “People are curious and ask about the details. People say it’s about time we advocate for voting.”

Burke liked the simple message behind the mural, saying it will stay up through early 2021.

“We believe in engaging our citizens,” she said. “We felt it was so appropriate at this time.”

While Stoeckley was painting, volunteers from Chippewa Valley Votes were at a tent next to the mural.

The Eau Claire Public Arts Council continues to seek agreements with area businesses to allow murals on their buildings.

“We want to be good stewards,” Burke said.