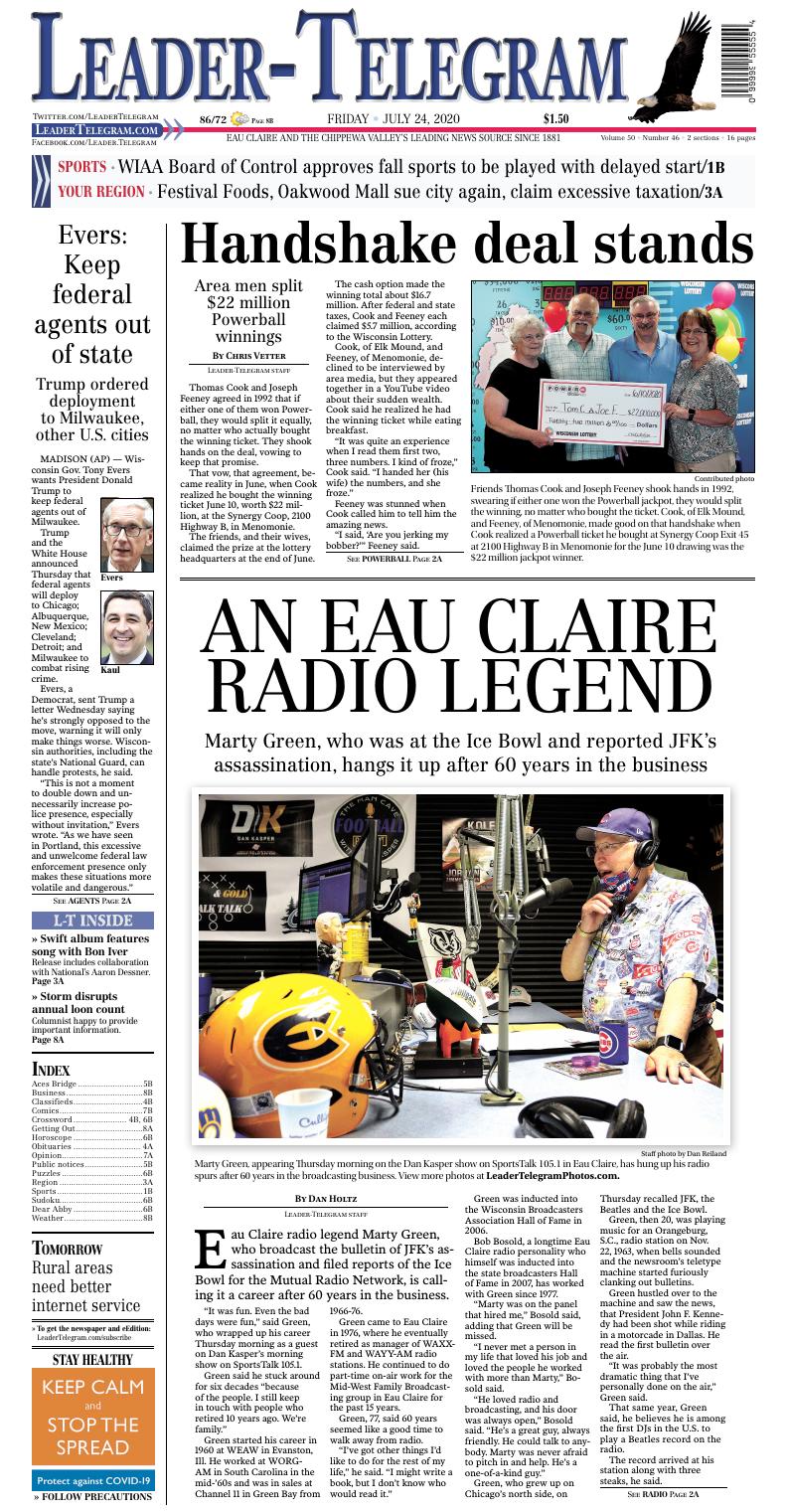 Friends Thomas Cook and Joseph Feeney shook hands in 1992, swearing if either one won the Powerball jackpot, they would split the winning, no matter who bought the ticket. Cook, of Elk Mound, and Feeney, of Menomonie, made good on that handshake when Cook realized a Powerball ticket he bought at Synergy Coop Exit 45 at 2100 Highway B in Menomonie for the June 10 drawing was the $22 million jackpot winner.

Thomas Cook and Joseph Feeney agreed in 1992 that if either one of them won Powerball, they would split it equally, no matter who actually bought the winning ticket. They shook hands on the deal, vowing to keep that promise.

That vow, that agreement, became reality in June, when Cook realized he bought the winning ticket June 10, worth $22 million, at the Synergy Coop, 2100 Highway B, in Menomonie.

The friends, and their wives, claimed the prize at the lottery headquarters at the end of June.

The cash option made the winning total about $16.7 million. After federal and state taxes, Cook and Feeney each claimed $5.7 million, according to the Wisconsin Lottery.

Cook, of Elk Mound, and Feeney, of Menomonie, declined to be interviewed by area media, but they appeared together in a YouTube video about their sudden wealth. Cook said he realized he had the winning ticket while eating breakfast.

“It was quite an experience when I read them first two, three numbers. I kind of froze,” Cook said. “I handed her (his wife) the numbers, and she froze.”

Feeney was stunned when Cook called him to tell him the amazing news.

“I said, ‘Are you jerking my bobber?’” Feeney said.

Wisconsin began selling Powerball tickets in 1992, and the men said their handshake agreement happened at that time. Feeney said they bought the tickets every week, never thinking it would actually happen.

Cook said he never thought about backing out on their three-decade-old agreement.

“A handshake is a handshake,” Cook said.

Cook said he immediately gave his work his two-week notice and retired. Feeney, who had worked at a fire department, had already retired.

Cook said he is looking forward to spending more time with his grandchildren and great-grandchildren, without worrying about if he could afford it.

“I can’t think of a better way to retire,” Cook said.

Synergy Coop received a $100,000 incentive for selling the winning ticket.

Cook said he anticipates he will keep buying lottery tickets.

Since Powerball began, Wisconsin has now had 18 jackpot winners, which is tied for fourth all time among the states who participate in the lottery. Tickets are now sold in 45 states. The odds of winning are 1 in 292 million.

Marty Green, appearing Thursday morning on the Dan Kasper show on SportsTalk 105.1 in Eau Claire, has hung up his radio spurs after 60 years in the broadcasting business. View more photos at LeaderTelegramPhotos.com.

Marty Green, appearing Thursday morning on the Dan Kasper show on SportsTalk 105.1 in Eau Claire, has hung up his radio spurs after 60 years in the broadcasting business. View more photos at LeaderTelegramPhotos.com.

Eau Claire radio legend Marty Green, who broadcast the bulletin of JFK’s assassination and filed reports of the Ice Bowl for the Mutual Radio Network, is calling it a career after 60 years in the business.

“It was fun. Even the bad days were fun,” said Green, who wrapped up his career Thursday morning as a guest on Dan Kasper’s morning show on SportsTalk 105.1.

Green said he stuck around for six decades “because of the people. I still keep in touch with people who retired 10 years ago. We’re family.”

Green came to Eau Claire in 1976, where he eventually retired as manager of WAXX-FM and WAYY-AM radio stations. He continued to do part-time on-air work for the Mid-West Family Broadcasting group in Eau Claire for the past 15 years.

Green, 77, said 60 years seemed like a good time to walk away from radio.

“I’ve got other things I’d like to do for the rest of my life,” he said. “I might write a book, but I don’t know who would read it.”

Green was inducted into the Wisconsin Broadcasters Association Hall of Fame in 2006.

Bob Bosold, a longtime Eau Claire radio personality who himself was inducted into the state broadcasters Hall of Fame in 2007, has worked with Green since 1977.

“Marty was on the panel that hired me,” Bosold said, adding that Green will be missed.

“I never met a person in my life that loved his job and loved the people he worked with more than Marty,” Bosold said.

“He loved radio and broadcasting, and his door was always open,” Bosold said. “He’s a great guy, always friendly. He could talk to anybody. Marty was never afraid to pitch in and help. He’s a one-of-a-kind guy.”

Green, who grew up on Chicago’s north side, on Thursday recalled JFK, the Beatles and the Ice Bowl.

Green, then 20, was playing music for an Orangeburg, S.C., radio station on Nov. 22, 1963, when bells sounded and the newsroom’s teletype machine started furiously clanking out bulletins.

Green hustled over to the machine and saw the news, that President John F. Kennedy had been shot while riding in a motorcade in Dallas. He read the first bulletin over the air.

“It was probably the most dramatic thing that I’ve personally done on the air,” Green said.

That same year, Green said, he believes he is among the first DJs in the U.S. to play a Beatles record on the radio.

The record arrived at his station along with three steaks, he said.

“We had a nice cookout at the radio station in South Carolina,” Green said.

As for the Ice Bowl on Dec. 31, 1967, Green said he was working in sales at Channel 11 in Green Bay when he got a call from the Mutual Radio Network two days before the game.

The network, which was familiar with him during his radio stint in South Carolina, asked if he could file five live reports of the game between the Green Bay Packers and Dallas Cowboys.

The press box was full. Green got a ticket to the coldest game in NFL history and had to use a pay phone to file his reports. He earned $50 per report.

As a television salesperson in Green Bay in the 1960s, Green was frequently around Vince Lombardi, but never got the chance to interview the coaching legend.

“I can still hear his voice in my head. There will never be another Vince Lombardi,” Green said.

Even though Thursday was officially Green’s last day on the radio airwaves, Eau Claire area listeners may still hear Green’s voice on occasion.

“If Bosold has a day off, maybe I’ll fill in,” Green said.

Evers, a Democrat, sent Trump a letter Wednesday saying he’s strongly opposed to the move, warning it will only make things worse. Wisconsin authorities, including the state’s National Guard, can handle protests, he said.

“This is not a moment to double down and unnecessarily increase police presence, especially without invitation,” Evers wrote. “As we have seen in Portland, this excessive and unwelcome federal law enforcement presence only makes these situations more volatile and dangerous.”

Oregon Attorney General Ellen Rosenblum has asked a judge for a restraining order blocking federal agents deployed to quell protests in Portland. She has accused the agents of arresting protesters without probable cause and using excessive force.

The American Civil Liberties Union’s Wisconsin chapter issued a statement decrying the decision to send agents to Milwaukee, saying the city doesn’t need a repeat of the failed approach in Portland. 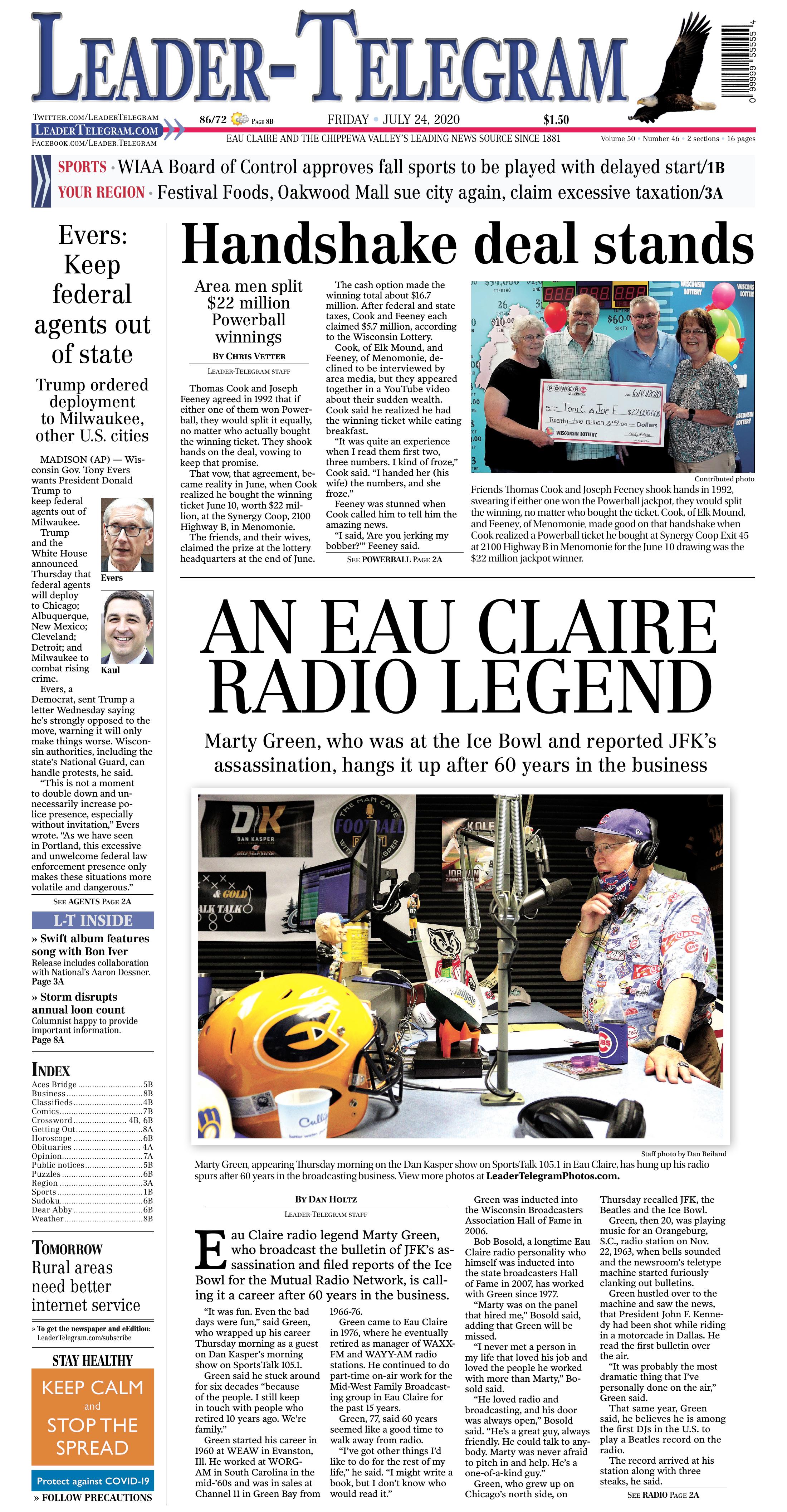