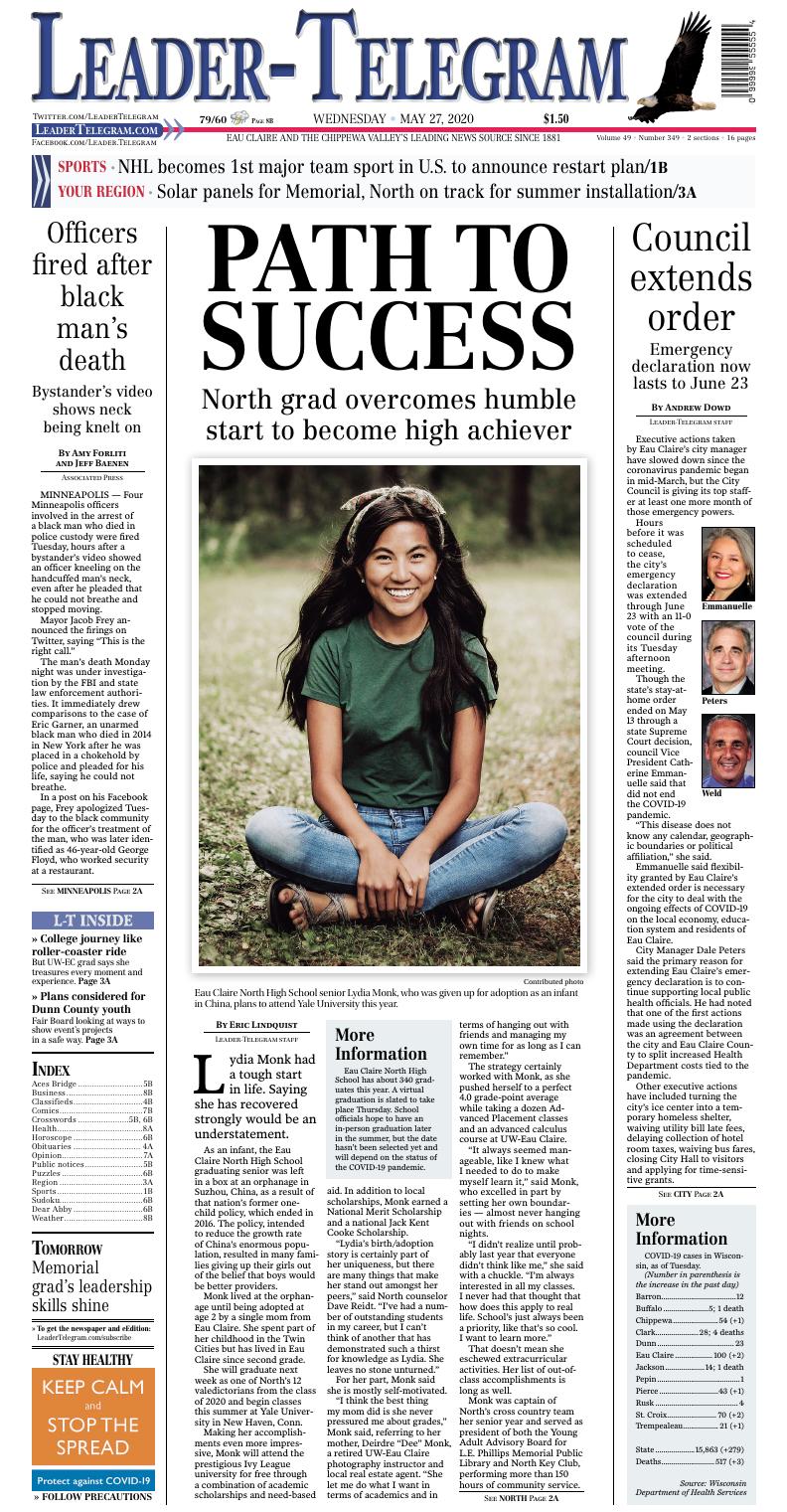 Eau Claire North High School senior Lydia Monk, who was given up for adoption as an infant in China, plans to attend Yale University this year.

Lydia Monk had a tough start in life. Saying she has recovered strongly would be an understatement.

As an infant, the Eau Claire North High School graduating senior was left in a box at an orphanage in Suzhou, China, as a result of that nation’s former one-child policy, which ended in 2016. The policy, intended to reduce the growth rate of China’s enormous population, resulted in many families giving up their girls out of the belief that boys would be better providers.

Monk lived at the orphanage until being adopted at age 2 by a single mom from Eau Claire. She spent part of her childhood in the Twin Cities but has lived in Eau Claire since second grade.

She will graduate next week as one of North’s 12 valedictorians from the class of 2020 and begin classes this summer at Yale University in New Haven, Conn.

Making her accomplishments even more impressive, Monk will attend the prestigious Ivy League university for free through a combination of academic scholarships and need-based aid. In addition to local scholarships, Monk earned a National Merit Scholarship and a national Jack Kent Cooke Scholarship.

“Lydia’s birth/adoption story is certainly part of her uniqueness, but there are many things that make her stand out amongst her peers,” said North counselor Dave Reidt. “I’ve had a number of outstanding students in my career, but I can’t think of another that has demonstrated such a thirst for knowledge as Lydia. She leaves no stone unturned.”

For her part, Monk said she is mostly self-motivated.

“I think the best thing my mom did is she never pressured me about grades,” Monk said, referring to her mother, Deirdre “Dee” Monk, a retired UW-Eau Claire photography instructor and local real estate agent. “She let me do what I want in terms of academics and in terms of hanging out with friends and managing my own time for as long as I can remember.”

The strategy certainly worked with Monk, as she pushed herself to a perfect 4.0 grade-point average while taking a dozen Advanced Placement classes and an advanced calculus course at UW-Eau Claire.

“It always seemed manageable, like I knew what I needed to do to make myself learn it,” said Monk, who excelled in part by setting her own boundaries — almost never hanging out with friends on school nights.

“I didn’t realize until probably last year that everyone didn’t think like me,” she said with a chuckle. “I’m always interested in all my classes. I never had that thought that how does this apply to real life. School’s just always been a priority, like that’s so cool. I want to learn more.”

That doesn’t mean she eschewed extracurricular activities. Her list of out-of-class accomplishments is long as well.

Monk was captain of North’s cross country team her senior year and served as president of both the Young Adult Advisory Board for L.E. Phillips Memorial Public Library and North Key Club, performing more than 150 hours of community service.

She also was a member of the National Honor Society, Math Team and Environmental Club.

Despite all of the demands on her time, Monk maintains a positive attitude and is well-respected among her peers, Reidt said.

“She’s outgoing, respectful, modest, cheerful, a leader, and someone who will work for others when needed,” Reidt said. “She’s extremely gifted in many areas including academics, music, self-expression and self-advocacy to name a few.”

It’s no surprise, for someone with such impressive credentials, that Monk researched the academic reputations and communities of her potential college choices, but the huge “Harry Potter” fan also showed her fun side by acknowledging that she also was attracted to Yale’s residential house system, which is much like the one used at Hogwarts in the immensely popular fictional world created by author J.K. Rowling.

Reidt said he has seen a number of kids over the years who have been able to achieve at a high level academically and still be extremely involved in extracurriculars, but few at Monk’s level.

“In Lydia I have the confidence to predict that whatever she decides to do in her future, it will be for the betterment of the human race,” Reidt said. “Who knows, maybe she’ll develop the vaccine for a future pandemic?”

As for the current COVID-19 pandemic, Monk said she is saddened that the class of 2020’s senior year came to such an abrupt and strange end, although she understands and supports the reason her time at North is finishing online and her Yale career this summer is beginning virtually.

“You can’t take this seriously enough,” she said of social distancing and other safety precautions recommended by health experts to slow the spread of the new coronavirus.

She referred to the loss of personal interaction among students and teachers as tragic but still put a positive spin on the sacrifices students, teachers and others are making to promote public health.

“You do what you gotta do,” Monk said. “It’s not really comforting, but we’re all going through this together.”

Eau Claire North High School has about 340 graduates this year. A virtual graduation is slated to take place Thursday. School officials hope to have an in-person graduation later in the summer, but the date hasn't been selected yet and will depend on the status of the COVID-19 pandemic.

Executive actions taken by Eau Claire’s city manager have slowed down since the coronavirus pandemic began in mid-March, but the City Council is giving its top staffer at least one more month of those emergency powers.

Hours before it was scheduled to cease, the city’s emergency declaration was extended through June 23 with an 11-0 vote of the council during its Tuesday afternoon meeting.

Though the state’s stay-at-home order ended on May 13 through a state Supreme Court decision, council Vice President Catherine Emmanuelle said that did not end the COVID-19 pandemic.

“This disease does not know any calendar, geographic boundaries or political affiliation,” she said.

Emmanuelle said flexibility granted by Eau Claire’s extended order is necessary for the city to deal with the ongoing effects of COVID-19 on the local economy, education system and residents of Eau Claire.

City Manager Dale Peters said the primary reason for extending Eau Claire’s emergency declaration is to continue supporting local public health officials. He had noted that one of the first actions made using the declaration was an agreement between the city and Eau Claire County to split increased Health Department costs tied to the pandemic.

Peters noted that the number of executive actions has tapered off in recent weeks. At each council meeting, he has updated the city’s elected leaders on how the emergency declaration has been used. On Tuesday, he said the only change in the last two weeks was conducting the annual Board of Review meeting online instead of in person.

However, he contended that the emergency declaration should last another month so measures already put in place can remain and the city could remain nimble in responding to changing circumstances.

“Just because the legal status changed in the state of Wisconsin doesn’t change the fact we have a virus,” he said.

Peters added that he believes the coronavirus, which has no cure or vaccine yet, will continue to spread in the community.

Council President Terry Weld said that as many businesses reopen after they had been closed since mid-March, that doesn’t mean the end of struggles seen as a result of COVID-19.

The city has now been under a state of emergency since the council first declared one on March 17.

• Accounting and consulting firm Baker Tilly will assist the council in recruiting the next city manager to succeed the retiring Peters. The council voted 11-0 on Tuesday to approve a $24,500 contract with Baker Tilly, which was selected over competing proposals from The Mercer Group, PAA and Novak.

• Sections of Jeffers Road and Fairfax Street are scheduled for reconstruction in 2022 with the help of money from the state Department of Transportation. The council approved agreements Tuesday for nearly $1.5 million in state aid for the projects, which have a combined estimated total cost of about $2.57 million.

(Number in parenthesis is the increase in the past day) 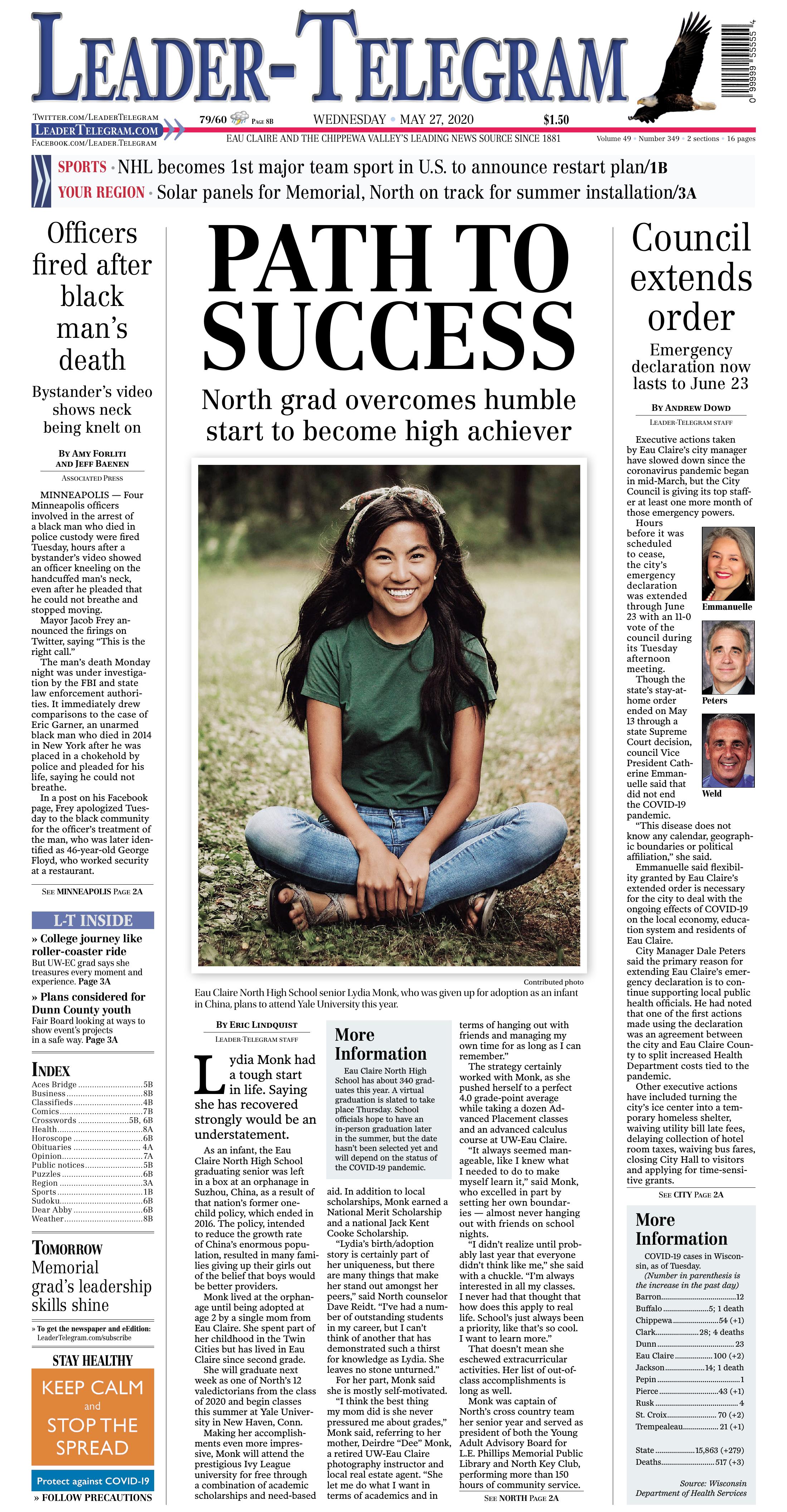