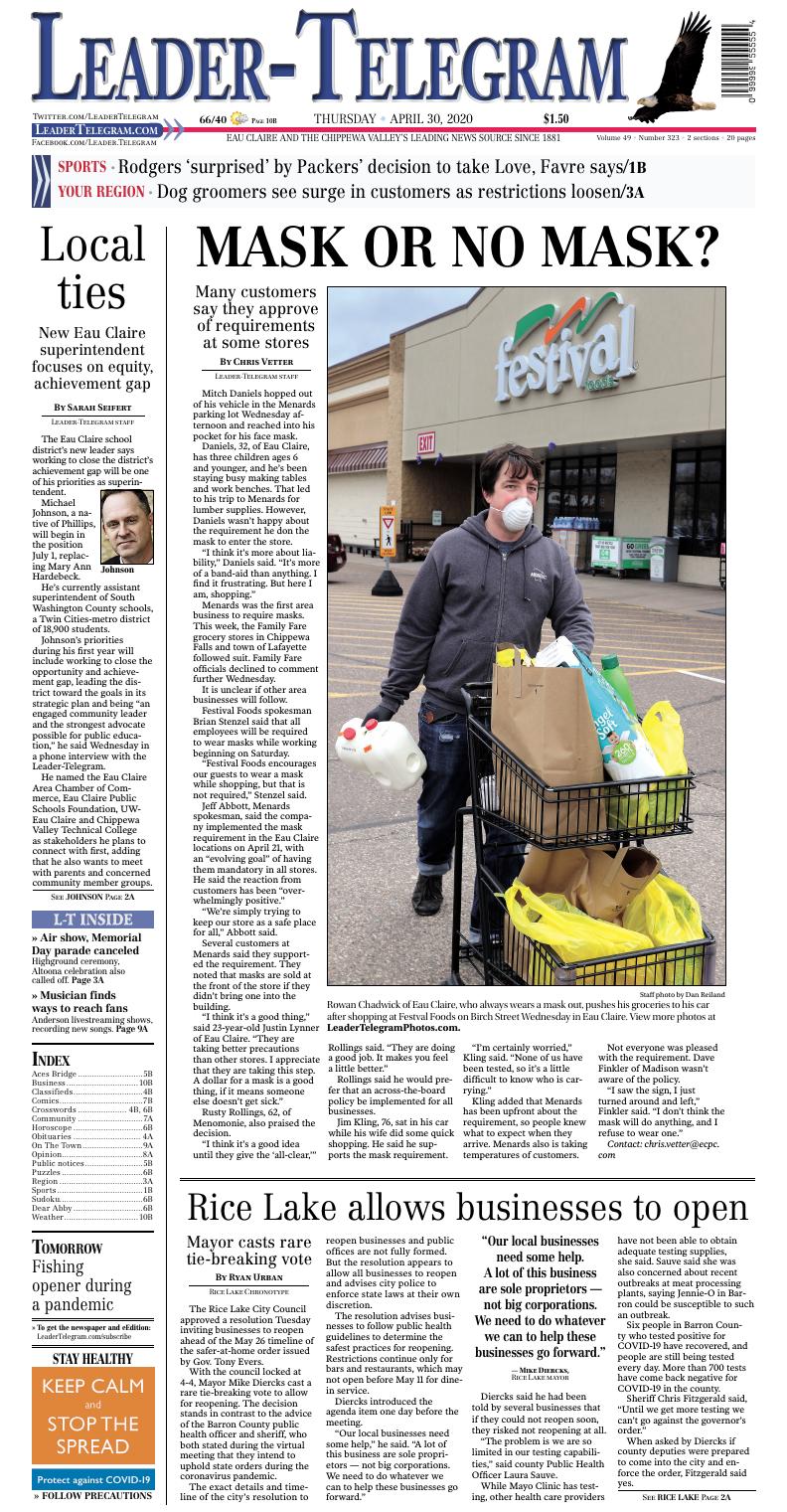 Rowan Chadwick of Eau Claire, who always wears a mask out, pushes his groceries to his car after shopping at Festval Foods on Birch Street Wednesday in Eau Claire. View more photos at LeaderTelegramPhotos.com.

Mitch Daniels hopped out of his vehicle in the Menards parking lot Wednesday afternoon and reached into his pocket for his face mask.

Daniels, 32, of Eau Claire, has three children ages 6 and younger, and he’s been staying busy making tables and work benches. That led to his trip to Menards for lumber supplies. However, Daniels wasn’t happy about the requirement he don the mask to enter the store.

“I think it’s more about liability,” Daniels said. “It’s more of a band-aid than anything. I find it frustrating. But here I am, shopping.”

It is unclear if other area businesses will follow.

Festival Foods spokesman Brian Stenzel said that all employees will be required to wear masks while working beginning on Saturday.

“Festival Foods encourages our guests to wear a mask while shopping, but that is not required,” Stenzel said.

Jeff Abbott, Menards spokesman, said the company implemented the mask requirement in the Eau Claire locations on April 21, with an “evolving goal” of having them mandatory in all stores. He said the reaction from customers has been “overwhelmingly positive.”

“We’re simply trying to keep our store as a safe place for all,” Abbott said.

Several customers at Menards said they supported the requirement. They noted that masks are sold at the front of the store if they didn’t bring one into the building.

“I think it’s a good thing,” said 23-year-old Justin Lynner of Eau Claire. “They are taking better precautions than other stores. I appreciate that they are taking this step. A dollar for a mask is a good thing, if it means someone else doesn’t get sick.”

“I think it’s a good idea until they give the ‘all-clear,’” Rollings said. “They are doing a good job. It makes you feel a little better.”

Rollings said he would prefer that an across-the-board policy be implemented for all businesses.

Jim Kling, 76, sat in his car while his wife did some quick shopping. He said he supports the mask requirement.

“I’m certainly worried,” Kling said. “None of us have been tested, so it’s a little difficult to know who is carrying.”

Kling added that Menards has been upfront about the requirement, so people knew what to expect when they arrive. Menards also is taking temperatures of customers.

Not everyone was pleased with the requirement. Dave Finkler of Madison wasn’t aware of the policy.

“I saw the sign, I just turned around and left,” Finkler said. “I don’t think the mask will do anything, and I refuse to wear one.”

The Rice Lake City Council approved a resolution Tuesday inviting businesses to reopen ahead of the May 26 timeline of the safer-at-home order issued by Gov. Tony Evers.

With the council locked at 4-4, Mayor Mike Diercks cast a rare tie-breaking vote to allow for reopening. The decision stands in contrast to the advice of the Barron County public health officer and sheriff, who both stated during the virtual meeting that they intend to uphold state orders during the coronavirus pandemic.

The exact details and timeline of the city’s resolution to reopen businesses and public offices are not fully formed. But the resolution appears to allow all businesses to reopen and advises city police to enforce state laws at their own discretion.

The resolution advises businesses to follow public health guidelines to determine the safest practices for reopening. Restrictions continue only for bars and restaurants, which may not open before May 11 for dine-in service.

Diercks introduced the agenda item one day before the meeting.

“Our local businesses need some help,” he said. “A lot of this business are sole proprietors — not big corporations. We need to do whatever we can to help these businesses go forward.”

Diercks said he had been told by several businesses that if they could not reopen soon, they risked not reopening at all.

“The problem is we are so limited in our testing capabilities,” said county Public Health Officer Laura Sauve.

While Mayo Clinic has testing, other health care providers have not been able to obtain adequate testing supplies, she said. Sauve said she was also concerned about recent outbreaks at meat processing plants, saying Jennie-O in Barron could be susceptible to such an outbreak.

Six people in Barron County who tested positive for COVID-19 have recovered, and people are still being tested every day. More than 700 tests have come back negative for COVID-19 in the county.

Sheriff Chris Fitzgerald said, “Until we get more testing we can’t go against the governor’s order.”

When asked by Diercks if county deputies were prepared to come into the city and enforce the order, Fitzgerald said yes.

Fitzgerald said he was bound by law to follow state orders unless a court challenge against the governor’s policies is successful.

“With a swipe of a pen I can be taken out of office if I do not abide by the governor’s orders,” he said.

Rice Lake Police Chief Steve Roux agreed that the nature of police is to enforce laws, but he said he felt there was some ambiguity about which businesses are essential or nonessential.

The city’s resolution was largely drafted by its contracted legal counsel Arnold Koehler, who questioned the legality of the governor’s order.

He said not allowing people to use their assets for the purpose of gaining income is depriving people of property without due process. He said the order also infringes on people’s right to assemble.

“We’re really not listening to what our experts are saying,” Dorrance said.

He said the state is laying a plan for easing the COVID-19 precautions, including the recent opening of more businesses and parks.

“I think we’re putting our officers in somewhat of a quandary. We just don’t know enough. I think we could be putting people in jeopardy,” Dorrance said.

Alderman Corey Schnacky said, “This is about putting the power back in people’s hands.”

The resolution is based on a plan enacted by the city of Hartford in southeastern Wisconsin, which is allowing all of its businesses to be open.

The Eau Claire school district’s new leader says working to close the district’s achievement gap will be one of his priorities as superintendent.

Michael Johnson, a native of Phillips, will begin in the position July 1, replacing Mary Ann Hardebeck.

Johnson’s priorities during his first year will include working to close the opportunity and achievement gap, leading the district toward the goals in its strategic plan and being “an engaged community leader and the strongest advocate possible for public education,” he said Wednesday in a phone interview with the Leader-Telegram.

He named the Eau Claire Area Chamber of Commerce, Eau Claire Public Schools Foundation, UW-Eau Claire and Chippewa Valley Technical College as stakeholders he plans to connect with first, adding that he also wants to meet with parents and concerned community member groups.

Johnson said he’s also considering how the coronavirus will impact schools in the next several months.

Schools will have to realize that COVID-19 will have “educational and emotional effects on our students and families that are long-lasting,” he said. “I’d anticipate working very closely with county agencies, state agencies and health departments.”

Johnson said at a community forum in April that he’ll work to introduce a “promise of equity” for all students in their education and opportunities; a 100-day plan that would include meeting with stakeholders this summer; and help shape the district’s strategic plan.

This summer will see Johnson, 50, return to his college town: He graduated from UW-Eau Claire with a bachelor’s degree in 1993 and a master’s degree in 2001, and has taught at Memorial High School and middle and high schools in Fall Creek, Rice Lake and Chippewa Falls.

His wife also formerly taught at DeLong and Northstar middle schools, he said at a community forum in early April.

The district’s new superintendent was also a fixture in UW-Eau Claire basketball: Johnson was inducted into the Blugold Hall of Fame in 2008 and was the most accurate field goal and free throw shooter in the university’s history, according to the university’s website.

“It’s been 30 years since I laced up my sneakers and played basketball at Zorn, but the education I got at the university and the connections I made at school and in the classroom, and obviously on the athletic court, really suited me well for a life in education,” Johnson said.

Before Johnson joined the South Washington County school district in 2014, he was principal, assistant principal and director of academic services at the River Falls school district.

He is currently a doctoral student at Bethel University.

Johnson and his wife have three children; his eldest plans to attend UW-Eau Claire this fall.

After a search that began last summer, the Eau Claire school board announced their selection Tuesday evening in a press release.

Johnson won out over the board’s two other finalists: Rosalie Daca, chief academic officer of the Racine school district, and Rev Hillstrom, director of educational equity for the Osseo (Minn.) school district.

Johnson “articulated well one of the main characteristics we wanted in our superintendent, which is having a solid critical frame of understanding to provide academic leadership to the whole district,” said board President Eric Torres.

The new superintendent will be paid $180,000 annually, according to his contract, Torres said.

The school board voted on Johnson’s selection in a closed session meeting on April 22.

Torres declined to say how individual board members voted, or if the vote to select Johnson was unanimous, saying that those actions were taken in closed session.

The board waited until Tuesday to announce Johnson’s selection as superintendent to create and revise his contract, Torres said.

The board’s search for the new superintendent began in August, but it’s been public for over a year that Hardebeck would retire from the district this summer. The board in February 2019 approved a one-year extension of her contract, which ends June 30.

Coronavirus-related closures impacted the final stages of the search: The school board interviewed finalists over video rather than in person.

Board Vice President Lori Bica, who chaired the superintendent search committee, said in a statement that finalists underwent a day of video interviews with the district and community groups.

The method was “everything one could hope for from a traditional, thorough, in-person interview schedule,” Bica said.

Torres praised the district’s technology team and assistants: “They met the challenge in a superb way … I believe we had greater participation in the community and in special stakeholder groups greater than we have had it in person.”

The board is now preparing for Johnson’s early summer transition and plans to give Hardebeck a “well-deserved exit celebration,” Torres said. 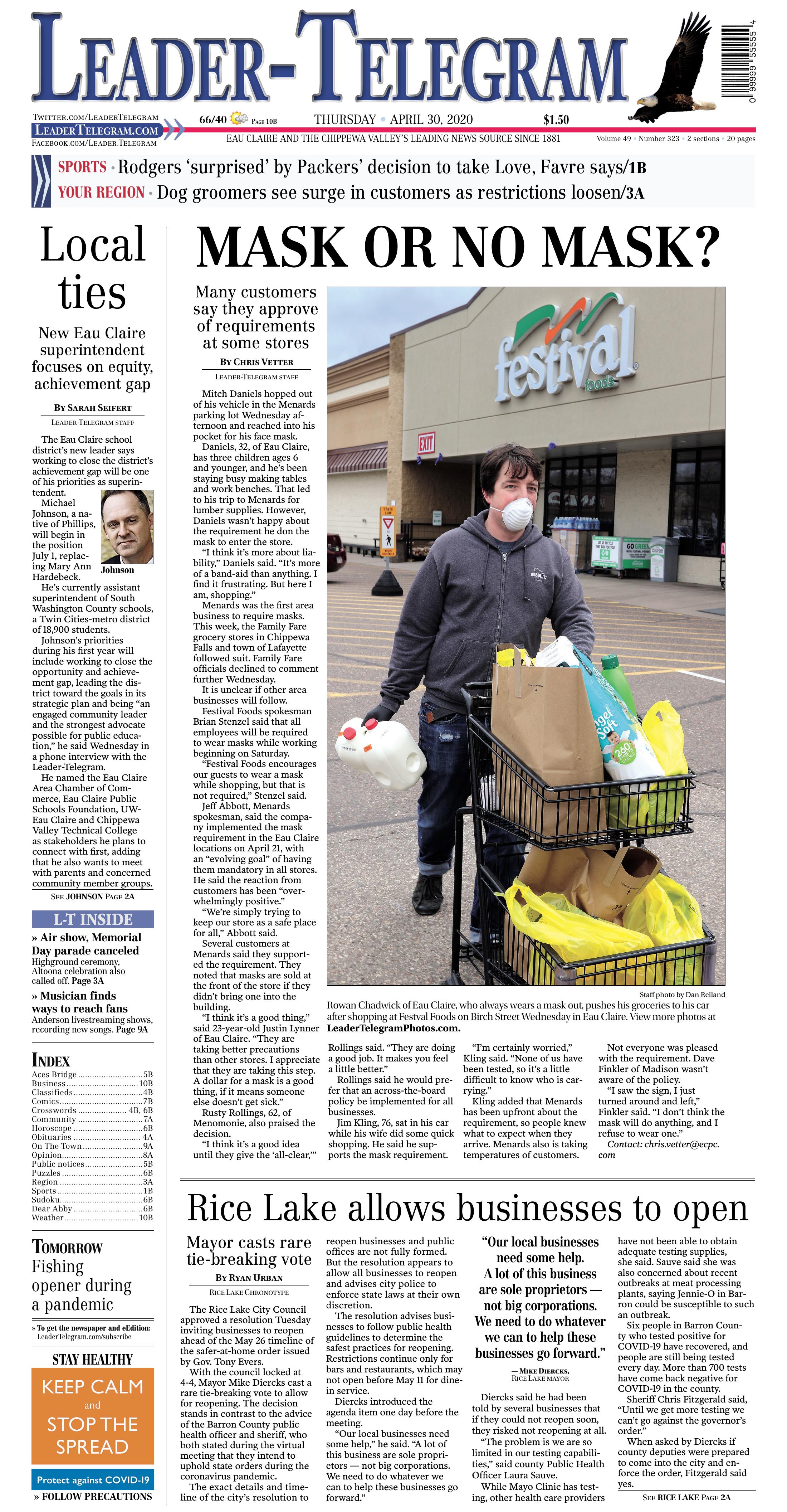