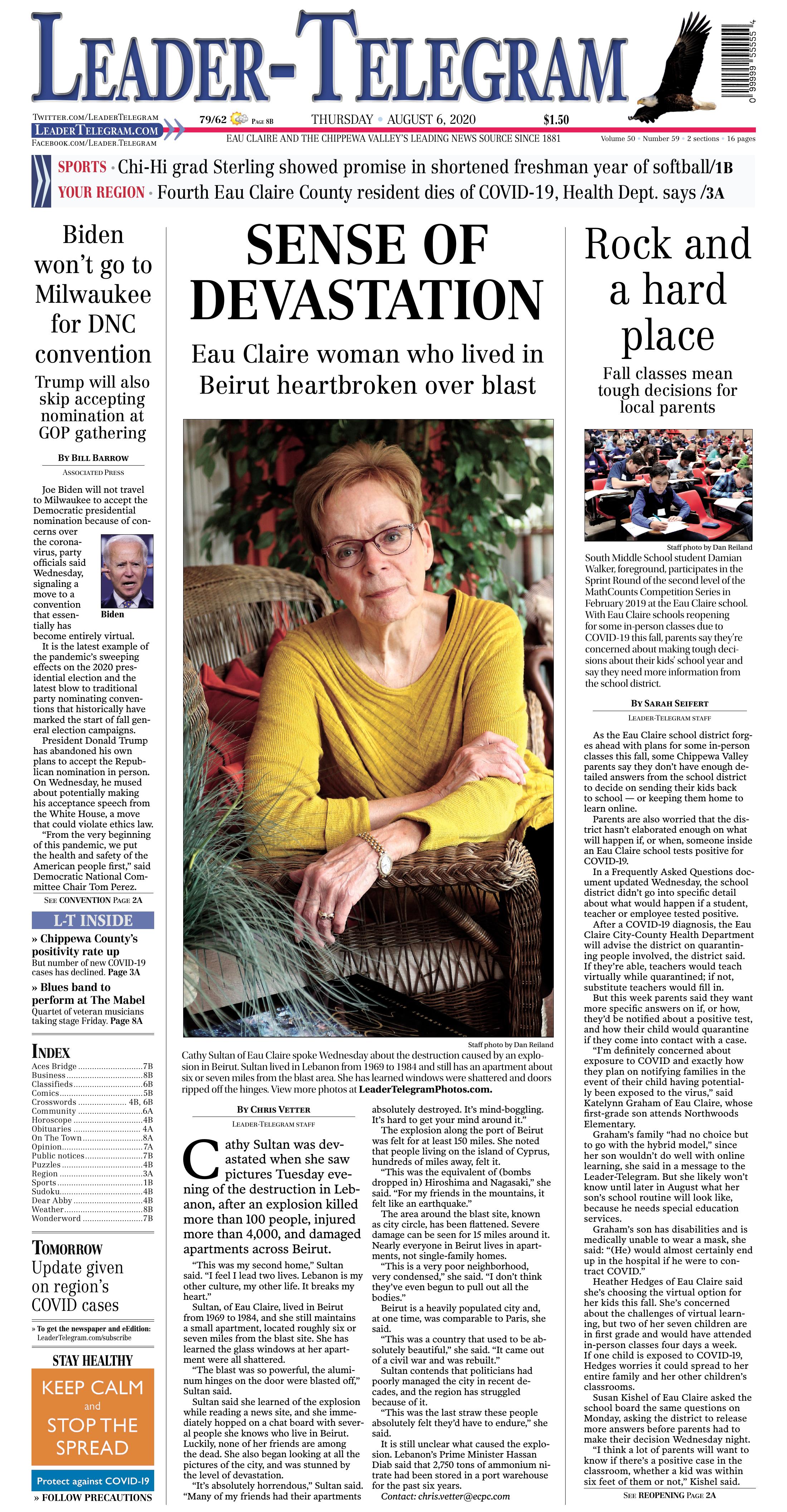 Cathy Sultan of Eau Claire spoke Wednesday about the destruction caused by an explosion in Beirut. Sultan lived in Lebanon from 1969 to 1984 and still has an apartment about six or seven miles from the blast area. She has learned windows were shattered and doors ripped off the hinges. View more photos at LeaderTelegramPhotos.com.

Cathy Sultan was devastated when she saw pictures Tuesday evening of the destruction in Lebanon, after an explosion killed more than 100 people, injured more than 4,000, and damaged apartments across Beirut.

“This was my second home,” Sultan said. “I feel I lead two lives. Lebanon is my other culture, my other life. It breaks my heart.”

Sultan, of Eau Claire, lived in Beirut from 1969 to 1984, and she still maintains a small apartment, located roughly six or seven miles from the blast site. She has learned the glass windows at her apartment were all shattered.

“The blast was so powerful, the aluminum hinges on the door were blasted off,” Sultan said.

Sultan said she learned of the explosion while reading a news site, and she immediately hopped on a chat board with several people she knows who live in Beirut. Luckily, none of her friends are among the dead. She also began looking at all the pictures of the city, and was stunned by the level of devastation.

“It’s absolutely horrendous,” Sultan said. “Many of my friends had their apartments absolutely destroyed. It’s mind-boggling. It’s hard to get your mind around it.”

The explosion along the port of Beirut was felt for at least 150 miles. She noted that people living on the island of Cyprus, hundreds of miles away, felt it.

“This was the equivalent of (bombs dropped in) Hiroshima and Nagasaki,” she said. “For my friends in the mountains, it felt like an earthquake.”

The area around the blast site, known as city circle, has been flattened. Severe damage can be seen for 15 miles around it. Nearly everyone in Beirut lives in apartments, not single-family homes.

“This is a very poor neighborhood, very condensed,” she said. “I don’t think they’ve even begun to pull out all the bodies.”

Beirut is a heavily populated city and, at one time, was comparable to Paris, she said.

“This was a country that used to be absolutely beautiful,” she said. “It came out of a civil war and was rebuilt.”

Sultan contends that politicians had poorly managed the city in recent decades, and the region has struggled because of it.

“This was the last straw these people absolutely felt they’d have to endure,” she said.

It is still unclear what caused the explosion. Lebanon’s Prime Minister Hassan Diab said that 2,750 tons of ammonium nitrate had been stored in a port warehouse for the past six years.

South Middle School student Damian Walker, foreground, participates in the Sprint Round of the second level of the MathCounts Competition Series in February 2019 at the Eau Claire school. With Eau Claire schools reopening for some in-person classes due to COVID-19 this fall, parents say they’re concerned about making tough decisions about their kids’ school year and say they need more information from the school district.

As the Eau Claire school district forges ahead with plans for some in-person classes this fall, some Chippewa Valley parents say they don’t have enough detailed answers from the school district to decide on sending their kids back to school — or keeping them home to learn online.

Parents are also worried that the district hasn’t elaborated enough on what will happen if, or when, someone inside an Eau Claire school tests positive for COVID-19.

In a Frequently Asked Questions document updated Wednesday, the school district didn’t go into specific detail about what would happen if a student, teacher or employee tested positive.

But this week parents said they want more specific answers on if, or how, they’d be notified about a positive test, and how their child would quarantine if they come into contact with a case.

“I’m definitely concerned about exposure to COVID and exactly how they plan on notifying families in the event of their child having potentially been exposed to the virus,” said Katelynn Graham of Eau Claire, whose first-grade son attends Northwoods Elementary.

Graham’s family “had no choice but to go with the hybrid model,” since her son wouldn’t do well with online learning, she said in a message to the Leader-Telegram. But she likely won’t know until later in August what her son’s school routine will look like, because he needs special education services.

Graham’s son has disabilities and is medically unable to wear a mask, she said: “(He) would almost certainly end up in the hospital if he were to contract COVID.”

Heather Hedges of Eau Claire said she’s choosing the virtual option for her kids this fall. She’s concerned about the challenges of virtual learning, but two of her seven children are in first grade and would have attended in-person classes four days a week. If one child is exposed to COVID-19, Hedges worries it could spread to her entire family and her other children’s classrooms.

Susan Kishel of Eau Claire asked the school board the same questions on Monday, asking the district to release more answers before parents had to make their decision Wednesday night.

“I think a lot of parents will want to know if there’s a positive case in the classroom, whether a kid was within six feet of them or not,” Kishel said.

“If my kid is sitting next to child A in English class and that child comes down positive, is it kids in that specific class? Is it the whole grade, the whole school?” asked Kelly VandenBush of Eau Claire.

Eau Claire schools Superintendent Michael Johnson said Wednesday in an email to the Leader-Telegram that the Health Department will interview and contact trace anyone who tests positive.

If that person was within six feet of other people for more than 15 minutes at a school, the school would provide names, seating charts and contact information. Health Department staffers would notify anyone who was in close contact, and they’d go into quarantine.

Johnson said in an email: “Our public notification protocol depends on the situation and we’ll notify as the Health Department directs us to. Transparency is important to us, and we are still in the process of determining the best way to keep our families notified of a changing situation ... I know the unknowns are difficult for our families.”

The school district is “making the most of the next four weeks to get our plan solidified and communicated with our families,” Johnson added.

Eau Claire students in most grades will return to in-person classes this September for two days per week, learning online for the other three days. The school district is also offering an all-virtual option for any K-12 student.

With a survey sent on July 23, the district gave parents until Wednesday night to decide if they’d like to opt in to the all-virtual option. The default option is the hybrid approach, involving some in-person classes.

VandenBush said it wasn’t enough time to make a decision without getting more answers from the district.

The school district said today it can’t organize lunch plans at every grade level until it determines how many families choose the hybrid option: It depends on “staffing, scheduling and space,” according to a district document.

School leaders have sympathized, but the district says it needs the final count from families before it can finalize staffing numbers and make detailed decisions about classrooms and lunch periods.

When asking families to choose between the two options, the school district extended its initial Aug. 1 deadline to Aug. 5, Johnson said.

VandenBush said she worries about her kids getting stuck in a tough situation, either option her family chose — in a classroom with higher potential of virus exposure, or falling behind in virtual learning.

The district has said families who pick the hybrid model will only be able to switch to the all-virtual option “if space permits,” and only as soon as space is available in virtual classes.

Families are feeling the pinch no matter what option they pick, parents said.

Hedges said she has reservations about the virtual option, which her family chose, calling the information she’s received about it “very vague.”

Virtual learning will involve daily, live lessons from Eau Claire teachers, and partly independent lessons, according to the school district. Kids who choose virtual learning this fall will be taught the same five day per week curriculum as their peers in in-person classes.

“Mental health-wise, I don’t think it would be good at all,” Hedges said of considering sending her kids to in-person classes.

Several parents said they sympathize with elected officials and school leaders, emphasizing that any choice they have to make this fall isn’t optimal.

“They’re doing the best they can,” VandenBush said. “I wouldn’t want to be in their shoes … I know they have to get a plan in place so they can start organizing teachers and class sizes. That’s going to take a really long time.”