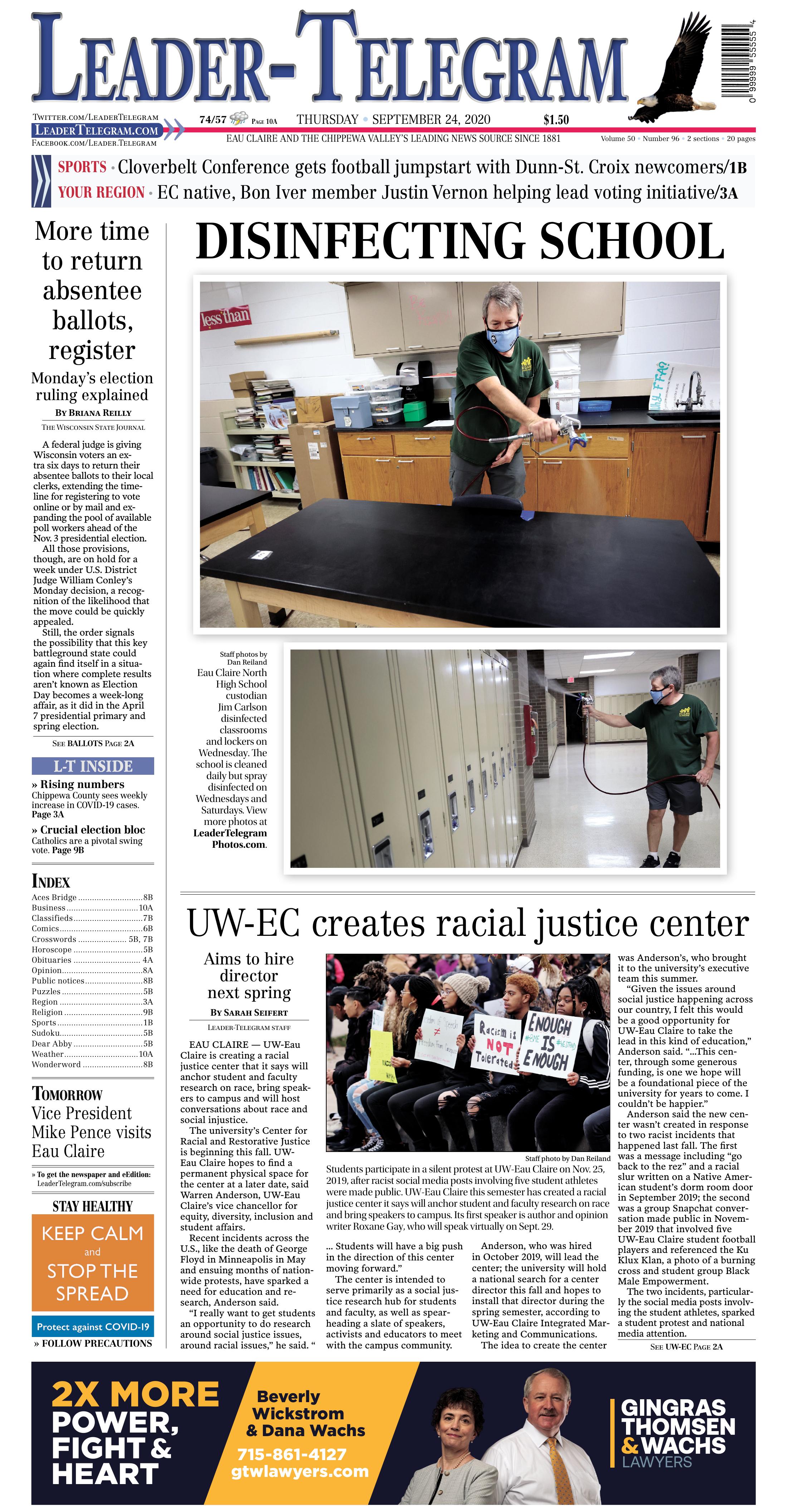 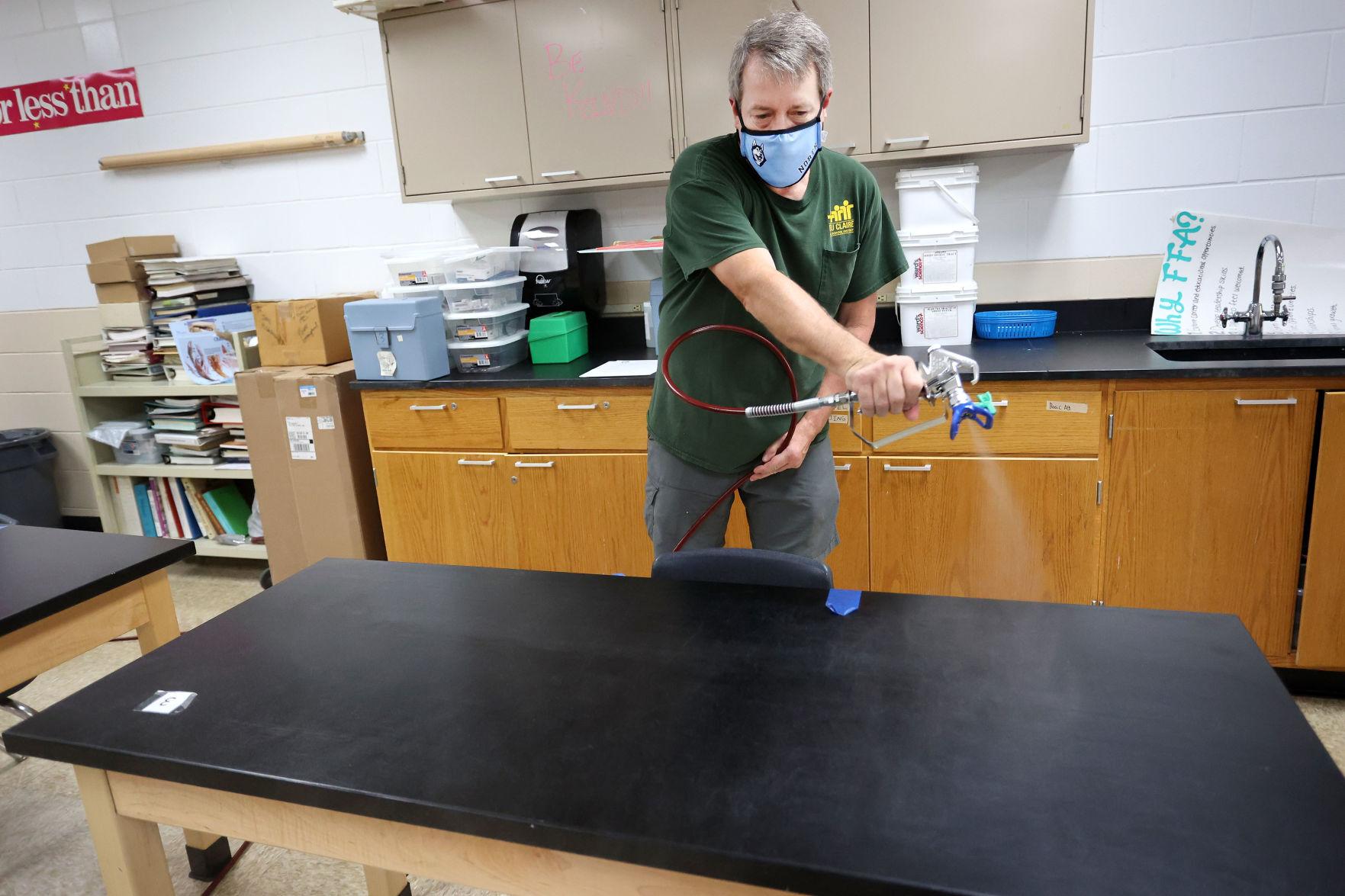 Students participate in a silent protest at UW-Eau Claire on Nov. 25, 2019, after racist social media posts involving five student athletes were made public. UW-Eau Claire this semester has created a racial justice center it says will anchor student and faculty research on race and bring speakers to campus. Its first speaker is author and opinion writer Roxane Gay, who will speak virtually on Sept. 29.

EAU CLAIRE — UW-Eau Claire is creating a racial justice center that it says will anchor student and faculty research on race, bring speakers to campus and will host conversations about race and social injustice.

The university’s Center for Racial and Restorative Justice is beginning this fall. UW-Eau Claire hopes to find a permanent physical space for the center at a later date, said Warren Anderson, UW-Eau Claire’s vice chancellor for equity, diversity, inclusion and student affairs.

Recent incidents across the U.S., like the death of George Floyd in Minneapolis in May and ensuing months of nationwide protests, have sparked a need for education and research, Anderson said.

“I really want to get students an opportunity to do research around social justice issues, around racial issues,” he said. “ … Students will have a big push in the direction of this center moving forward.”

The center is intended to serve primarily as a social justice research hub for students and faculty, as well as spearheading a slate of speakers, activists and educators to meet with the campus community.

Anderson, who was hired in October 2019, will lead the center; the university will hold a national search for a center director this fall and hopes to install that director during the spring semester, according to UW-Eau Claire Integrated Marketing and Communications.

The idea to create the center was Anderson’s, who brought it to the university’s executive team this summer.

“Given the issues around social justice happening across our country, I felt this would be a good opportunity for UW-Eau Claire to take the lead in this kind of education,” Anderson said. “...This center, through some generous funding, is one we hope will be a foundational piece of the university for years to come. I couldn’t be happier.”

Anderson said the new center wasn’t created in response to two racist incidents that happened last fall. The first was a message including “go back to the rez” and a racial slur written on a Native American student’s dorm room door in September 2019; the second was a group Snapchat conversation made public in November 2019 that involved five UW-Eau Claire student football players and referenced the Ku Klux Klan, a photo of a burning cross and student group Black Male Empowerment.

The five student athletes were suspended; a 16-member task force recommended the university implement a restorative justice program for students involved in misconduct, in addition to introducing equity, diversity and inclusion training for incoming freshmen and other initiatives. (The university said Tuesday that the five student football players involved in the social media posts would be allowed back on the team, and that a panel of faculty, students and staff found the five didn’t violate the UW System code of conduct.)

The center has received more than $75,000 in startup funding, Anderson said. Xcel Energy and Betsy Kell, a UW-Eau Claire graduate and trustee emerita of the UW-Eau Claire Foundation’s board, were initial founding donors and will be members of the new center’s advisory board, according to the university.

The center will also host a slate of monthly speakers to talk on campus — or virtually — about race and injustice, a program dubbed “Racing Toward Justice,” according to the university. Its first speaker is essayist, bestselling author and New York Times contributing opinion writer Roxane Gay, who is slated to speak virtually to the campus on Sept. 29.

A 30-minute presentation by Gay and a 30-minute question-and-answer session will be livestreamed at 6 p.m. on Sept. 29 and free to access, according to the university.