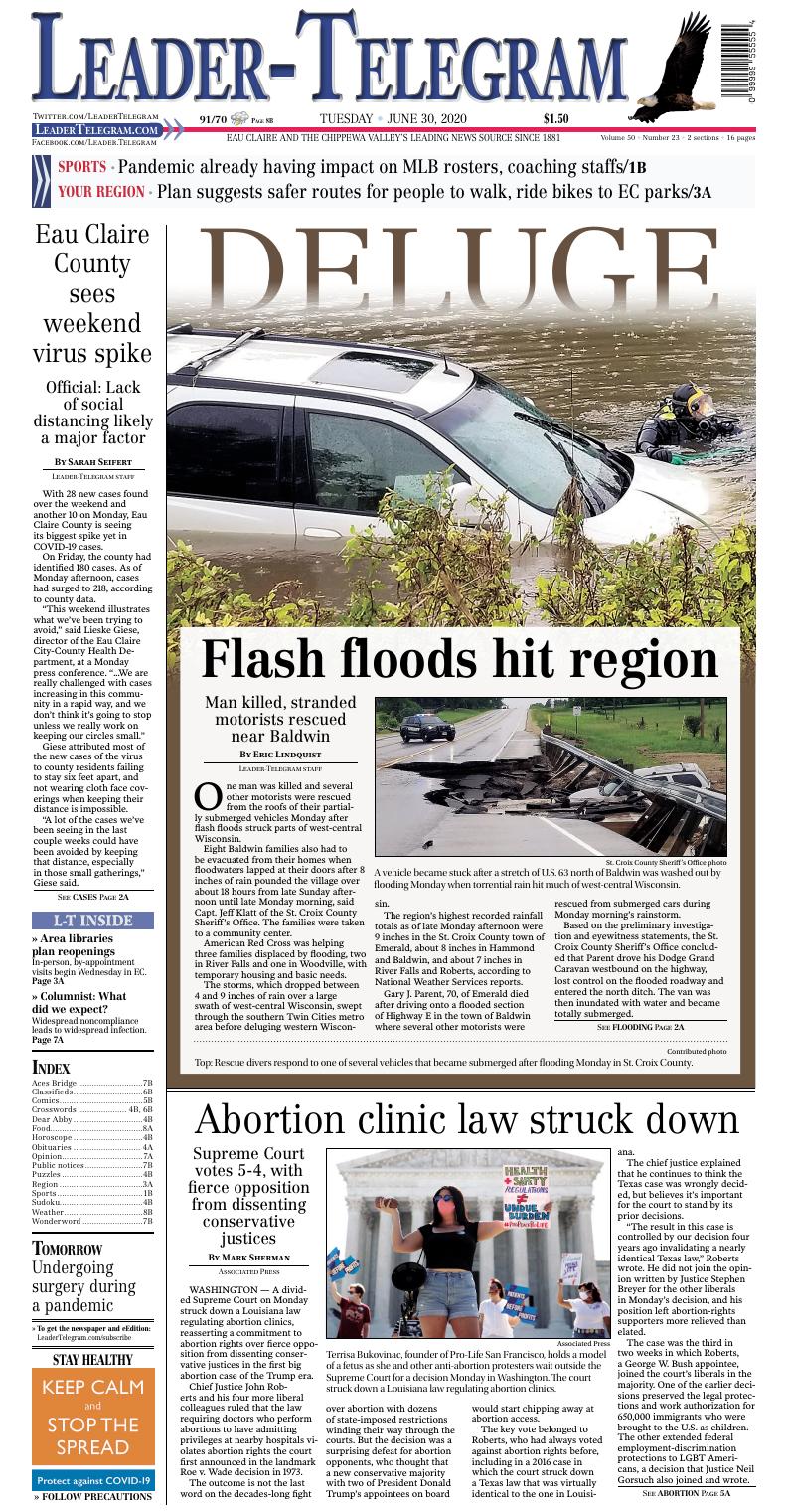 Rescue divers respond to one of several vehicles that became submerged after June flooding in St. Croix County.

One man was killed and several other motorists were rescued from the roofs of their partially submerged vehicles Monday after flash floods struck parts of west-central Wisconsin.

Eight Baldwin families also had to be evacuated from their homes when floodwaters lapped at their doors after 8 inches of rain pounded the village over about 18 hours from late Sunday afternoon until late Monday morning, said Capt. Jeff Klatt of the St. Croix County Sheriff’s Office. The families were taken to a community center.

American Red Cross was helping three families displaced by flooding, two in River Falls and one in Woodville, with temporary housing and basic needs.

The storms, which dropped between 4 and 9 inches of rain over a large swath of west-central Wisconsin, swept through the southern Twin Cities metro area before deluging western Wisconsin.

The region’s highest recorded rainfall totals as of late Monday afternoon were 9 inches in the St. Croix County town of Emerald, about 8 inches in Hammond and Baldwin, and about 7 inches in River Falls and Roberts, according to National Weather Services reports.

Gary J. Parent, 70, of Emerald died after driving onto a flooded section of Highway E in the town of Baldwin where several other motorists were rescued from submerged cars during Monday morning’s rainstorm.

Based on the preliminary investigation and eyewitness statements, the St. Croix County Sheriff’s Office concluded that Parent drove his Dodge Grand Caravan westbound on the highway, lost control on the flooded roadway and entered the north ditch. The van was then inundated with water and became totally submerged.

United Fire and Rescue pulled him out of the flooded vehicle and a Baldwin EMS ambulance transported him to Western Wisconsin Health in Baldwin. The county medical examiner pronounced Parent dead at the hospital.

Another Emerald resident, Jeff Warren, was one of the lucky ones who survived a frightening early morning ordeal in the floodwaters.

Warren’s wife, Sheila, said Jeff left to drive to his job in Minnesota at 4:15 a.m. Monday and only got about a block from home when he drove onto what just looked like wet pavement in the driving rainstorm.

“It was still completely dark and he just hit a wall of water,” Sheila said, noting that the water came from an overflowing creek that is normally just a trickle this time of year.

Jeff was able to roll the driver’s side window down, crawl out, climb onto the roof of his vehicle and call his wife.

“He called me and said, ‘I need help. I’m in the river,’ said Sheila, who immediately called 911 and then talked to her stranded husband via cellphone as he waited to be rescued. “At least he was wise enough not to swim. He never would have made it.”

Somerset rescue crews responded and rescued Jeff with a boat in an area that is normally a field.

“He is OK, but that was a close one. We realize it could have gone horribly wrong,” said Sheila, estimating that only about 7 inches of the vehicle’s roof was above water when Jeff was standing on it. “Thank God his car was stable and it wasn’t floating.”

Sheila said the couple have never seen anything like that level of flooding in 25 years of living in their home.

The National Weather Service determined that some west-central Wisconsin communities received the amount of rain seen only once every 10 to 25 years, said meteorologist Tyler Hasenstein of the agency’s office in Chanhassen, Minnesota.

The worst of the thunderstorms occurred between 6 p.m. and about midnight Sunday, although rain continued into Monday, he said.

Dry soil in the region was able absorb quite a bit of water early in the storm but eventually became saturated, causing widespread reports of flash flooding of creeks, urban areas and low-lying areas, Hasenstein said.

Stretches of several roads and bridges were impassable after the storms, Klatt said. Though water levels had mostly returned to near normal by late Monday afternoon, some washed out sections of road still need to be repaired, including U.S. 63 north of Baldwin. Highway 29 near Spring Valley also was temporarily closed, according to the Wisconsin Department of Transportation.

“We urge everyone to use extreme caution if you have to travel,” the St. Croix County Sheriff’s Office said in a Facebook post. “Be very cautious of submerged roadways in low lying areas and blind corners.”

In the nearby Pierce County village of Ellsworth, officials said rain overwhelmed many culverts and caused localized flooding, including along parts of Highway 10.

Officials urged motorists not to travel through affected areas, attempt to cross flooded roads or drive around barriers.

“If you see water over the road, you never know what’s underneath it,” Hasenstein said. “That’s why our motto is ‘Turn around. Don’t drown.’ “

The Associated Press contributed to this story.

A member of the Wisconsin National Guard administers a swab test on May 11 at the Prevea Health Clinic in Eau Claire.

With 28 new cases found over the weekend and another 10 on Monday, Eau Claire County is seeing its biggest spike yet in COVID-19 cases.

On Friday, the county had identified 180 cases. As of Monday afternoon, cases had surged to 218, according to county data.

“This weekend illustrates what we’ve been trying to avoid,” said Lieske Giese, director of the Eau Claire City-County Health Department, at a Monday press conference. “...We are really challenged with cases increasing in this community in a rapid way, and we don’t think it’s going to stop unless we really work on keeping our circles small.”

Giese attributed most of the new cases of the virus to county residents failing to stay six feet apart, and not wearing cloth face coverings when keeping their distance is impossible.

“A lot of the cases we’ve been seeing in the last couple weeks could have been avoided by keeping that distance, especially in those small gatherings,” Giese said.

Of the county’s 218 cases, 69 people have active cases and 149 have recovered, Giese said. One county resident has died of the virus, a person over 65 with underlying health conditions.

It’s unclear if the case jumps in Eau Claire County will follow the other county’s lead. By June 17, La Crosse County had 173 cases of the virus; as of Monday, it had 428, according to the La Crosse County Health Department.

“La Crosse County was well under 100 cases a few weeks ago, and they’re now at over 400 cases,” Giese said. “...When the young and healthy get sick, and choose to spread the disease by not staying home and not getting tested, they’re making choices that impact all of us. We’re asking the community to lean in and say that we care about each other, and we’re going to slow down the spread of disease.”

Cause of new cases unclear

Giese didn’t tie the county’s big spikes in new cases to any particular event — including holiday celebrations, businesses reopening or recent rallies in western Wisconsin — but said “it appears most of our spread is happening because people aren’t following the (public health) order in Eau Claire County, or the public health recommendations that occur in every county.”

People with mild symptoms “are choosing to be out and about, and choosing not to follow those public health rules,” she said.

Eau Claire County’s public health order, which was loosened on Friday, now allows up to 100 people at indoor gatherings and 250 people at outdoor gatherings. But even at gatherings, the order dictates people still follow the six-foot social distancing rule, Giese said last week.

Rallies and protests of Floyd’s death that amassed hundreds of attendees were held in Eau Claire on May 31, June 4 and June 5, or about three weeks ago.

Symptoms of the virus typically appear two to 14 days after exposure, according to the CDC.

Cases in Eau Claire County began increasing more significantly around June 26 (although the reporting of new cases is delayed by about one day, as the county is now sending its case data to the state Department of Health Services before reporting it publicly, Giese said last month).

Nationally, protests of Floyd’s death − many of which drew tens of thousands of people outdoors − so far haven’t seemed to magnify COVID-19 outbreaks, though experts are cautious to say they didn’t have any indirect impact, USA Today reported on June 22: Large protests were just as common in U.S. counties without outbreaks as counties that did see outbreaks, although experts say virus spread at protests could have been evened out by people who increasingly stayed at home.

Cases are rising in parallel statewide. Hospitalizations in Wisconsin are still well below a peak the state hit in early April, the Wisconsin State Journal reported, but the state’s seven-day new case average has risen every day for the last week, according to the state Department of Health Services.

Wisconsin reported 315 new cases on Monday, just over 28,000 cases of the virus in total. No new deaths were reported Monday; 777 Wisconsin residents have died of the virus.

Dunn County gained three new cases since Friday, for a total of 37, according to the Dunn County Health Department. Eight of those are active cases.