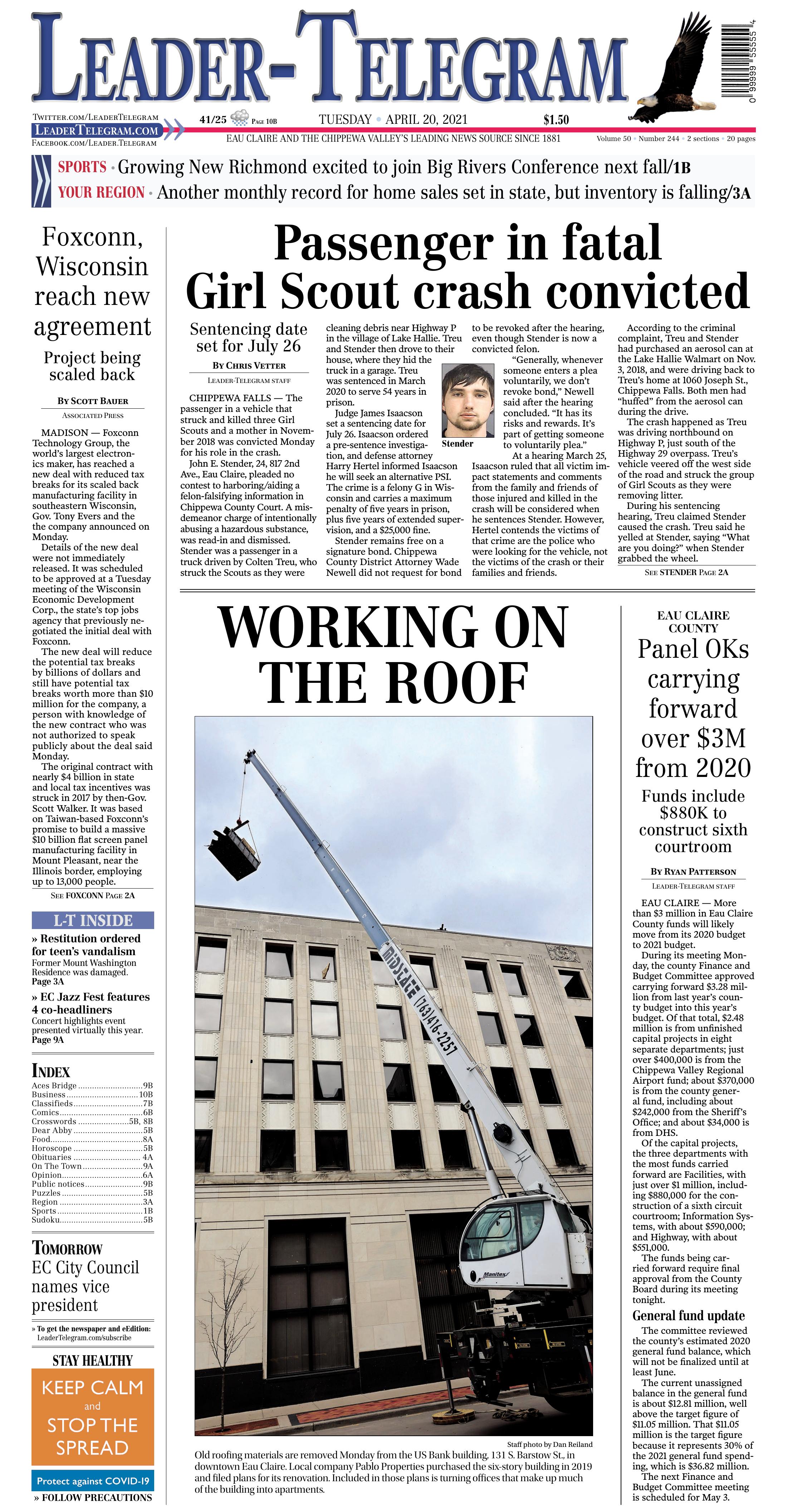 CHIPPEWA FALLS — The passenger in a vehicle that struck and killed three Girl Scouts and a mother in November 2018 was convicted Monday for his role in the crash.

John E. Stender, 24, 817 2nd Ave., Eau Claire, pleaded no contest to harboring/aiding a felon-falsifying information in Chippewa County Court. A misdemeanor charge of intentionally abusing a hazardous substance, was read-in and dismissed. Stender was a passenger in a truck driven by Colten Treu, who struck the Scouts as they were cleaning debris near Highway P in the village of Lake Hallie. Treu and Stender then drove to their house, where they hid the truck in a garage. Treu was sentenced in March 2020 to serve 54 years in prison.

Judge James Isaacson set a sentencing date for July 26. Isaacson ordered a pre-sentence investigation, and defense attorney Harry Hertel informed Isaacson he will seek an alternative PSI. The crime is a felony G in Wisconsin and carries a maximum penalty of five years in prison, plus five years of extended supervision, and a $25,000 fine.

Stender remains free on a signature bond. Chippewa County District Attorney Wade Newell did not request for bond to be revoked after the hearing, even though Stender is now a convicted felon.

“Generally, whenever someone enters a plea voluntarily, we don’t revoke bond,” Newell said after the hearing concluded. “It has its risks and rewards. It’s part of getting someone to voluntarily plea.”

At a hearing March 25, Isaacson ruled that all victim impact statements and comments from the family and friends of those injured and killed in the crash will be considered when he sentences Stender. However, Hertel contends the victims of that crime are the police who were looking for the vehicle, not the victims of the crash or their families and friends.

According to the criminal complaint, Treu and Stender had purchased an aerosol can at the Lake Hallie Walmart on Nov. 3, 2018, and were driving back to Treu’s home at 1060 Joseph St., Chippewa Falls. Both men had “huffed” from the aerosol can during the drive.

The crash happened as Treu was driving northbound on Highway P, just south of the Highway 29 overpass. Treu’s vehicle veered off the west side of the road and struck the group of Girl Scouts as they were removing litter.

During his sentencing hearing, Treu claimed Stender caused the crash. Treu said he yelled at Stender, saying “What are you doing?” when Stender grabbed the wheel.

Treu said he overcorrected the vehicle and wound up going in the ditch, where he struck the Girl Scouts.

In interviews with law enforcement, Stender admitted he grabbed the wheel of the car, causing Treu to yell at him. Stender recalled seeing one person being struck by the vehicle; he hit his head and lost consciousness. He woke up just before they arrived at Treu’s home.

After striking the five people — one Girl Scout who was hit survived the crash — Treu drove his vehicle back to his home rather than staying at the scene. He then hid the pickup in a garage. Stender did not immediately assist law enforcement or return to the scene, leading to the charge of assisting or harboring a felon.

The four people killed in the crash were Autumn Helgeson and Jayna S. Kelley, 9, both of Lake Hallie, Haylee J. Hickle, 10, and her mother, Sara Jo Schneider, 32, both of the town of Lafayette. 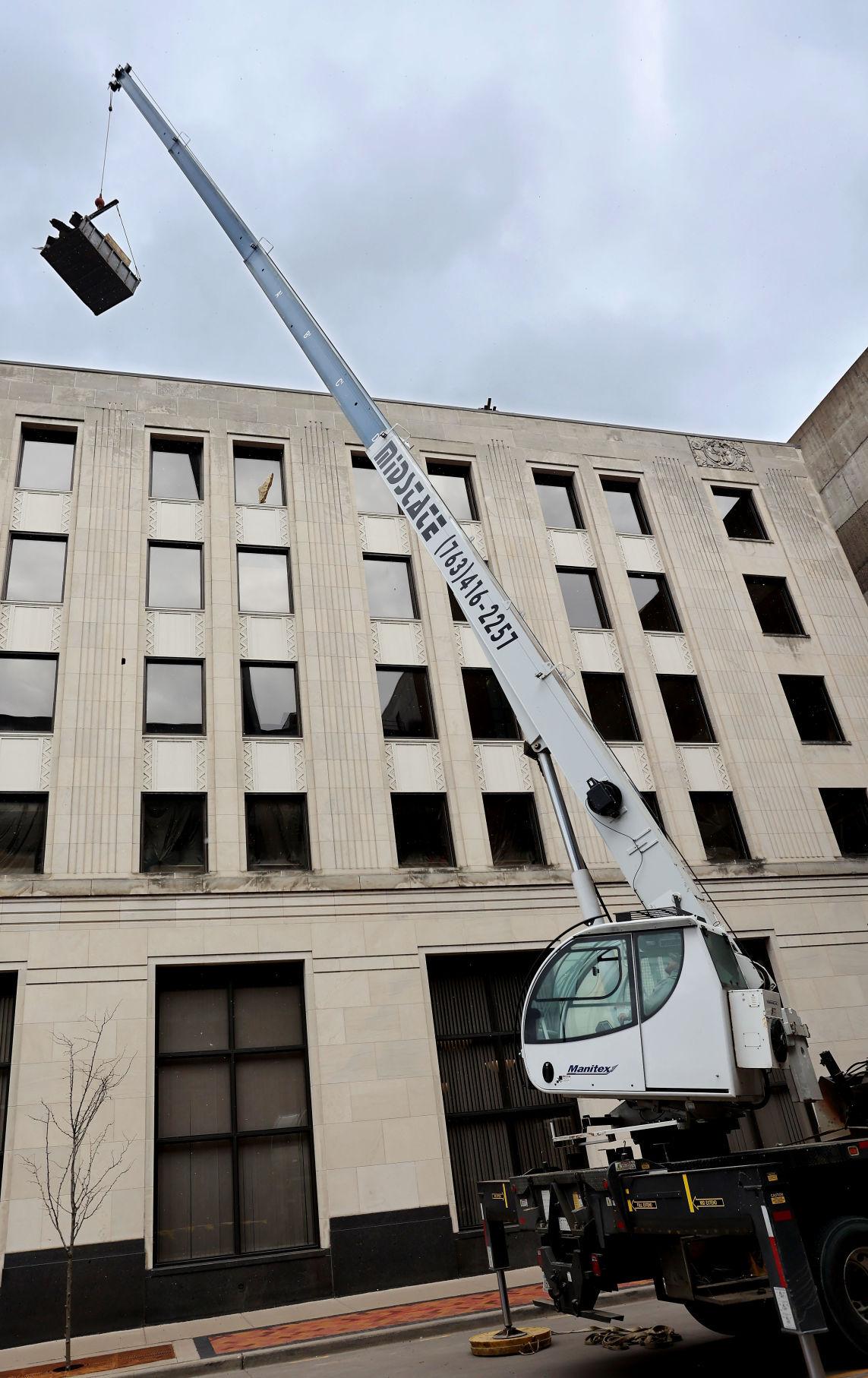 Old roofing materials are removed Monday from the US Bank building, 131 S. Barstow St., in downtown Eau Claire. Local company Pablo Properties purchased the six-story building in 2019 and filed plans for its renovation. Included in those plans is turning offices that make up much of the building into apartments.

MADISON — Foxconn Technology Group, the world’s largest electronics maker, has reached a new deal with reduced tax breaks for its scaled back manufacturing facility in southeastern Wisconsin, Gov. Tony Evers and the the company announced on Monday.

Details of the new deal were not immediately released. It was scheduled to be approved at a Tuesday meeting of the Wisconsin Economic Development Corp., the state’s top jobs agency that previously negotiated the initial deal with Foxconn.

The original contract with nearly $4 billion in state and local tax incentives was struck in 2017 by then-Gov. Scott Walker. It was based on Taiwan-based Foxconn’s promise to build a massive $10 billion flat screen panel manufacturing facility in Mount Pleasant, near the Illinois border, employing up to 13,000 people.

But Foxconn, best known for making Apple iPhones, has continually scaled back its plans for the site and missed employment targets that would trigger state tax credits. The state told Foxconn last year that it would not award it tax credits because the company had made substantial changes in its manufacturing plans and was out of compliance with the tax credit agreement. Foxconn employed 281 people in 2019 in Wisconsin, according to the state economic development agency.

David Callender, a spokesman for the Wisconsin Economic Development Corp., said the agency does not comment on its discussions with companies “unless and until action has been taken by the board.”

One of the agency’s board members, Democratic Assembly Minority Leader Gordon Hintz, said he was encouraged that both sides had agreed to a deal but he still had questions about the contract he will be voting on at the Tuesday meeting.

“All of us want more transparency and clarity on what’s happening,” Hintz said. “That’s something the company has been dishonest, deceptive and failed on.”

Evers, a Democrat who ran as a critic of the project in 2018 and defeated Walker, a Republican, said in a statement that the new deal “works for everyone.”

“I’ve said all along that my goal as governor would be to find an agreement that works for Wisconsin taxpayers while providing the support Foxconn needs to be successful here in our state,” Evers said.

Jay Lee, Foxconn’s vice chairman, said Foxconn approved the new deal with a desire to lower taxpayer liability in exchange for the flexibility to pursue business opportunities the meet market demand.” He said Foxconn was grateful a solution could be found.

After the original deal was signed, Foxconn said it was downsizing the factory to be built over 2,500 acres (1,012 hectares) of land from what is known as a Generation 10.5 plant to a Generation 6 plant that makes smaller thin-film transistor liquid crystal display screens for cellphones and other devices, rather than the larger screens that were first proposed.

Foxconn has announced, and then quickly ended, other projects at the site including “a cutting-edge, cloud-based, robotic retail platform” for caffeine sales and ventilators to help the state respond to the COVID-19 pandemic.

The company’s changing plans led Evers to call for its contract to be rewritten.

Foxconn also made promises about basing its North American headquarters in Milwaukee and hiring 500 employees, but that has not happened. It also promised to open “innovation centers” in Green Bay, Eau Claire, Racine and Madison that would employ up to 200 people each. Buildings were purchased, but the company did not move forward with its plans.

In 2018, Foxconn said it planned to invest $100 million in engineering and innovation research at UW-Madison. Since then, research center and off-campus location have not been established. Foxconn did sponsor a $700,000 research project at UW-Madison and university officials said in March that talks with Foxconn were ongoing.

EAU CLAIRE — More than $3 million in Eau Claire County funds will likely move from its 2020 budget to 2021 budget.

During its meeting Monday, the county Finance and Budget Committee approved carrying forward $3.28 million from last year’s county budget into this year’s budget. Of that total, $2.48 million is from unfinished capital projects in eight separate departments; just over $400,000 is from the Chippewa Valley Regional Airport fund; about $370,000 is from the county general fund, including about $242,000 from the Sheriff’s Office; and about $34,000 is from DHS.

Of the capital projects, the three departments with the most funds carried forward are Facilities, with just over $1 million, including $880,000 for the construction of a sixth circuit courtroom; Information Systems, with about $590,000; and Highway, with about $551,000.

The funds being carried forward require final approval from the County Board during its meeting tonight.

The committee reviewed the county’s estimated 2020 general fund balance, which will not be finalized until at least June.

The next Finance and Budget Committee meeting is scheduled for May 3.