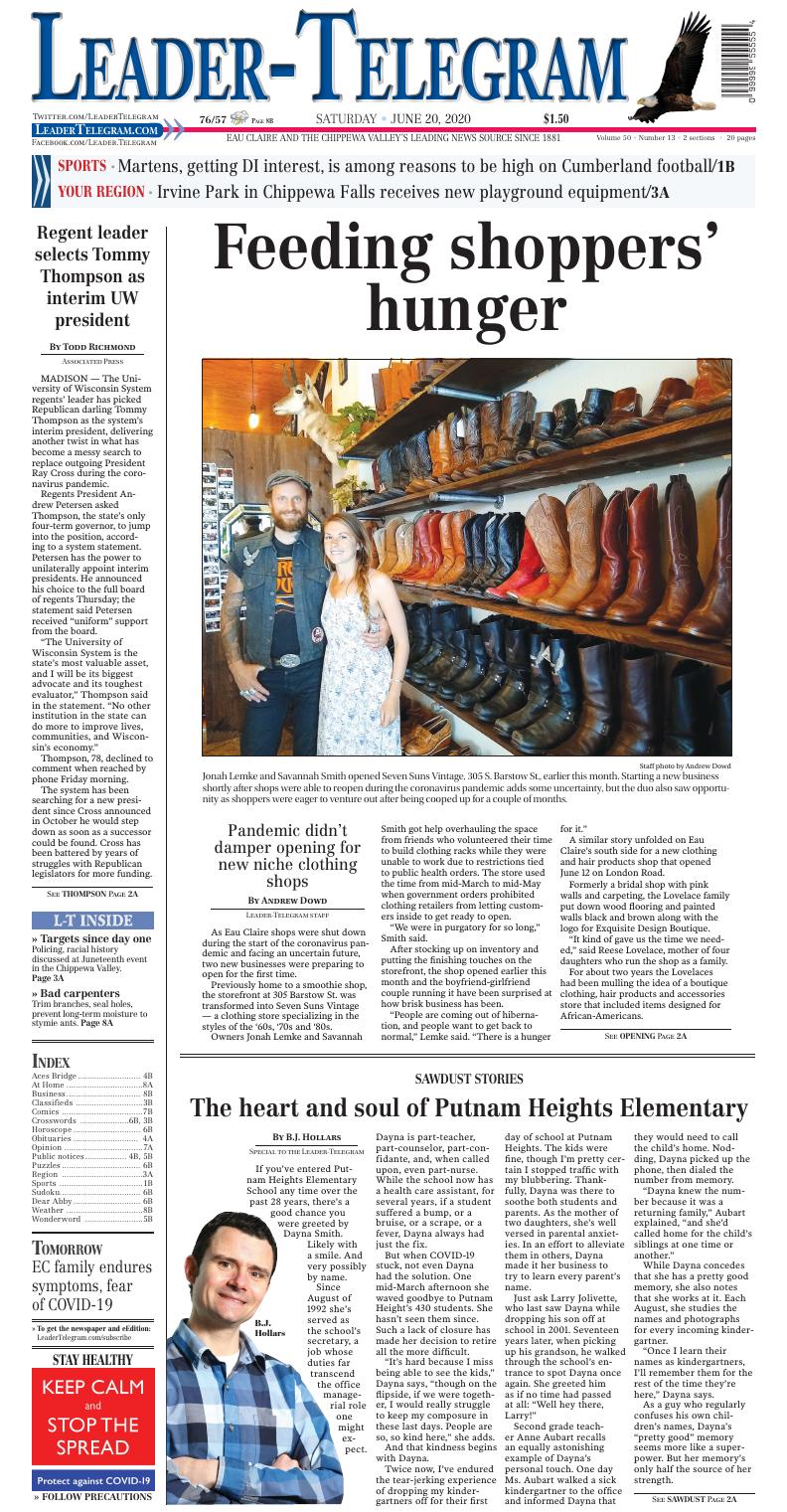 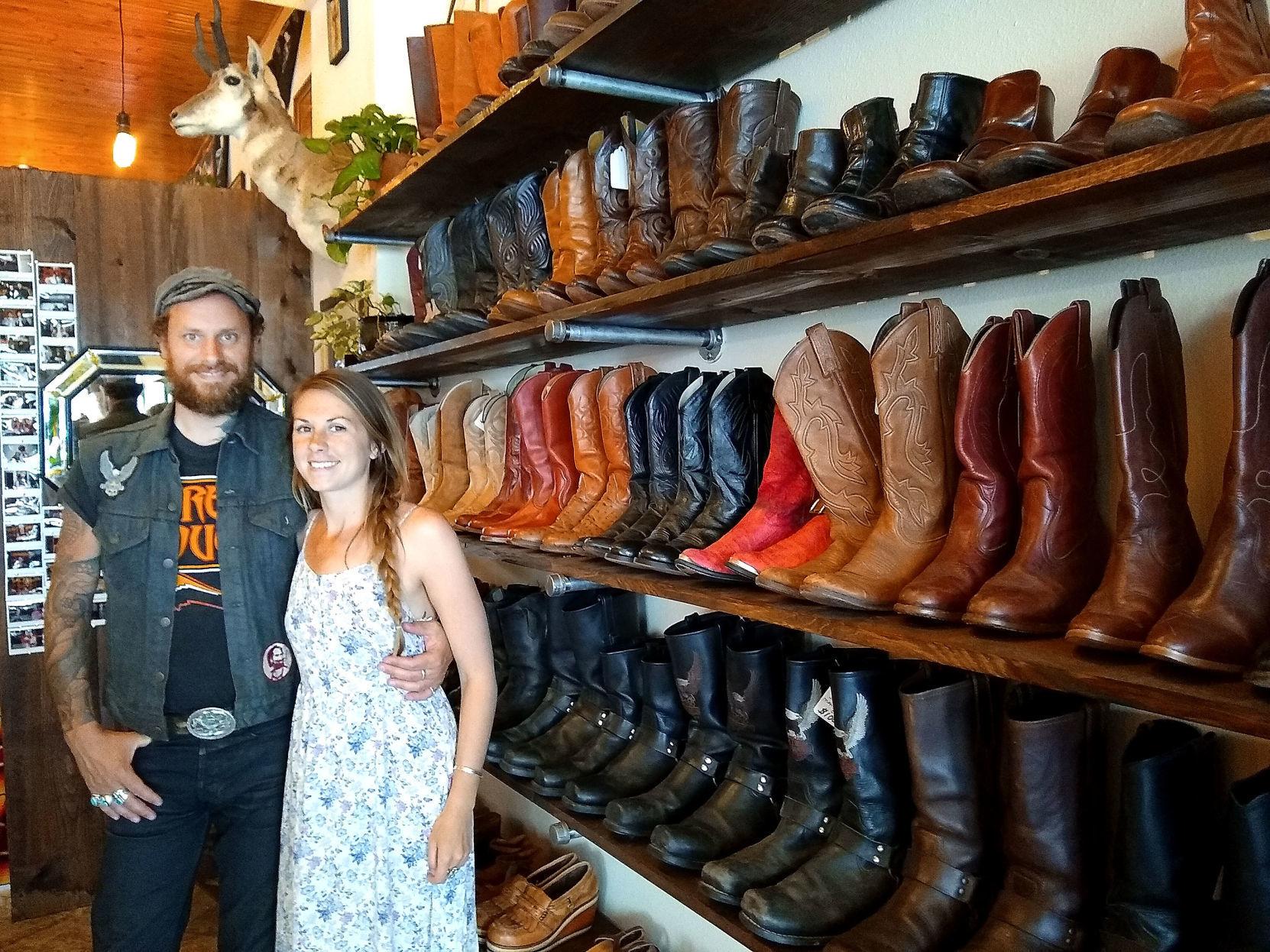 Jonah Lemke and Savannah Smith opened Seven Suns Vintage, 305 S. Barstow St., earlier this month. Starting a new business shortly after shops were able to reopen during the coronavirus pandemic adds some uncertainty, but the duo also saw opportunity as shoppers were eager to venture out after being cooped up for a couple of months.

Daily-updates
featured
The heart and soul of Putnam Heights Elementary
By B.J. Hollars Special to the Leader-Telegram
06.19.20
Staff photo by Dan Reiland

If you’ve entered Putnam Heights Elementary School any time over the past 28 years, there’s a good chance you were greeted by Dayna Smith. Likely with a smile. And very possibly by name.

Since August of 1992 she’s served as the school’s secretary, a job whose duties far transcend the office managerial role one might expect. Dayna is part-teacher, part-counselor, part-confidante, and, when called upon, even part-nurse. While the school now has a health care assistant, for several years, if a student suffered a bump, or a bruise, or a scrape, or a fever, Dayna always had just the fix.

But when COVID-19 stuck, not even Dayna had the solution. One mid-March afternoon she waved goodbye to Putnam Height’s 430 students. She hasn’t seen them since. Such a lack of closure has made her decision to retire all the more difficult.

“It’s hard because I miss being able to see the kids,” Dayna says, “though on the flipside, if we were together, I would really struggle to keep my composure in these last days. People are so, so kind here,” she adds.

And that kindness begins with Dayna.

Twice now, I’ve endured the tear-jerking experience of dropping my kindergartners off for their first day of school at Putnam Heights. The kids were fine, though I’m pretty certain I stopped traffic with my blubbering. Thankfully, Dayna was there to soothe both students and parents. As the mother of two daughters, she’s well versed in parental anxieties. In an effort to alleviate them in others, Dayna made it her business to try to learn every parent’s name.

Just ask Larry Jolivette, who last saw Dayna while dropping his son off at school in 2001. Seventeen years later, when picking up his grandson, he walked through the school’s entrance to spot Dayna once again. She greeted him as if no time had passed at all: “Well hey there, Larry!”

Second grade teacher Anne Aubart recalls an equally astonishing example of Dayna’s personal touch. One day Ms. Aubart walked a sick kindergartner to the office and informed Dayna that they would need to call the child’s home. Nodding, Dayna picked up the phone, then dialed the number from memory.

“Dayna knew the number because it was a returning family,” Aubart explained, “and she’d called home for the child’s siblings at one time or another.”

While Dayna concedes that she has a pretty good memory, she also notes that she works at it. Each August, she studies the names and photographs for every incoming kindergartner.

“Once I learn their names as kindergartners, I’ll remember them for the rest of the time they’re here,” Dayna says.

As a guy who regularly confuses his own children’s names, Dayna’s “pretty good” memory seems more like a superpower. But her memory’s only half the source of her strength.

Dayna’s greatest gift is utilizing her first-name basis relationship to ensure that every student is seen. As class sizes increase and teachers become ever more taxed, sometimes a staff member like Dayna can make all the difference in the life of a student. Parent Kristen Berger shared how her son, Owen, once regularly ambled into the office under the auspices of phantom tummy aches, hoping to be sent home. Dayna always listened, sympathized, and after a bit of chitchat (which regularly seemed to cure what ailed him), redirected Owen back to class. Over the years, Berger witnessed similar encounters involving other students. “Dayna was always able to get the kids on their way back to where they need to be without making them feel like she hadn’t met their needs,” Berger said. “All they wanted was a little attention, or maybe someone just to tell them they were OK. Or maybe,” Berger added, “they just needed some Dayna time.”

In 2017, Dayna received the Eau Claire Public Schools Foundation’s prestigious Golden Apple Award, then Putnam Heights principal Kim Koller commending Dayna for her kindness, her helpfulness and how, “at the end of the day you make sure everyone gets home.”

It’s no small matter overseeing the personal safety and well-being of a school’s worth of students. Dayna rightfully credits the entire staff, but I can’t help but think that student-centered approach begins at the school’s front desk.

“An elementary school office is a bustling place,” remarked second grade teacher Kate Gilboy, “but Dayna always stays calm and collected. I honestly don’t know if I’ve ever met anyone as composed, while also being organized, hard-working, kind, and quick to solve problems. First impressions are impactful. Putnam has been blessed to have such a class-act as our first point of contact.”

Retired media specialist Sharon Bestul described Dayna as “the heart and soul of Putnam Heights,” and, indeed, many parents agree.

When I ask Dayna what she’d have told her students if she’d had the chance to say goodbye, she mulls it over for a moment.

“I’d wish each and every one of them the very best throughout their lives,” Dayna says.

And surely, she’d call each of them by name.

MADISON — The University of Wisconsin System regents’ leader has picked Republican darling Tommy Thompson as the system’s interim president, delivering another twist in what has become a messy search to replace outgoing President Ray Cross during the coronavirus pandemic.

Regents President Andrew Petersen asked Thompson, the state’s only four-term governor, to jump into the position, according to a system statement. Petersen has the power to unilaterally appoint interim presidents. He announced his choice to the full board of regents Thursday; the statement said Petersen received “uniform” support from the board.

“The University of Wisconsin System is the state’s most valuable asset, and I will be its biggest advocate and its toughest evaluator,” Thompson said in the statement. “No other institution in the state can do more to improve lives, communities, and Wisconsin’s economy.”

Thompson, 78, declined to comment when reached by phone Friday morning.

The system has been searching for a new president since Cross announced in October he would step down as soon as a successor could be found. Cross has been battered by years of struggles with Republican legislators for more funding.

University of Alaska System President Jim Johnsen emerged as the lone finalist earlier this month after other would-be finalists dropped out of the running out of concerns that if they were identified they’d lose credibility in the fight against the coronavirus on their current campuses.

Johnsen announced June 12 that he, too, was withdrawing from consideration amid intense criticism from UW faculty, staff and students. Those groups complained that they weren’t allowed any representatives on a search committee and Johnsen has had a rocky relationship with faculty in Alaska.

Thompson, a Republican, was Wisconsin’s only four-term governor. He stepped down during during his fourth term to serve as then-President George W. Bush’s health secretary. He mounted a brief run for president in 2008 and ran for U.S. Senate in 2012, losing to Democrat Tammy Baldwin. He was a member of the state Assembly in 1971 when it voted to create the UW System.

Thompson could serve as a bridge between system officials desperate for more state aid and Republican lawmakers who have been reluctant to give it to them.

The system is entering its eighth year of a Republican-imposed freeze on in-state undergraduate tuition. The GOP slashed the system’s budget by $250 million during Cross’ first year as president. In the most recent state budget, Republicans increased its funding, but by less than the rate of inflation. Cross said he felt like he’d been “kicked in the shins” by Republicans.

The pandemic has only worsened the system’s financial woes. UW officials estimate they could lose as much as $102.3 million in revenue through the summer semester as students stay home.

The system is preparing to reopen this fall with a mix of in-person and online instruction but the threat of infections spreading quickly among students still looms. Thompson’s experience as Bush’s health secretary and connections he built in that connection could help the system adjust as the semester progresses.

Peterson called Thompson “a unifying choice” as interim president during a video conference with reporters Friday morning. He said Thompson, who has always cultivated an image of himself as a jovial, back-slapping buddy on-the-next-bar-stool, is eager to get out to the campuses and meet people.

“To some measure, we’ve had to restrain his enthusiasm,” Petersen quipped.

“Tommy Thompson is a Wisconsin legend. He will be an outstanding leader for UW-System,” Darling said. “His energy, experience, and willingness to listen to everyone will help move the System forward.”

Sen. Steve Nass, a Whitewater Republican who serves as vice chair of the Senate universities committee and is a frequent UW critic, sounded the lone note of caution, issuing a statement saying he would support Thompson only if he preserves the tuition freeze, cuts spending and positions, and “fights to refocus the UW System on education instead of liberal indoctrination.”

The system statement said Thompson requested that he be paid the minimum $489,334 salary for the interim position. He will take over the system presidency on July 1 and will serve until a new president is found. The statement said the regents won’t start looking for a permanent president for at least a year. 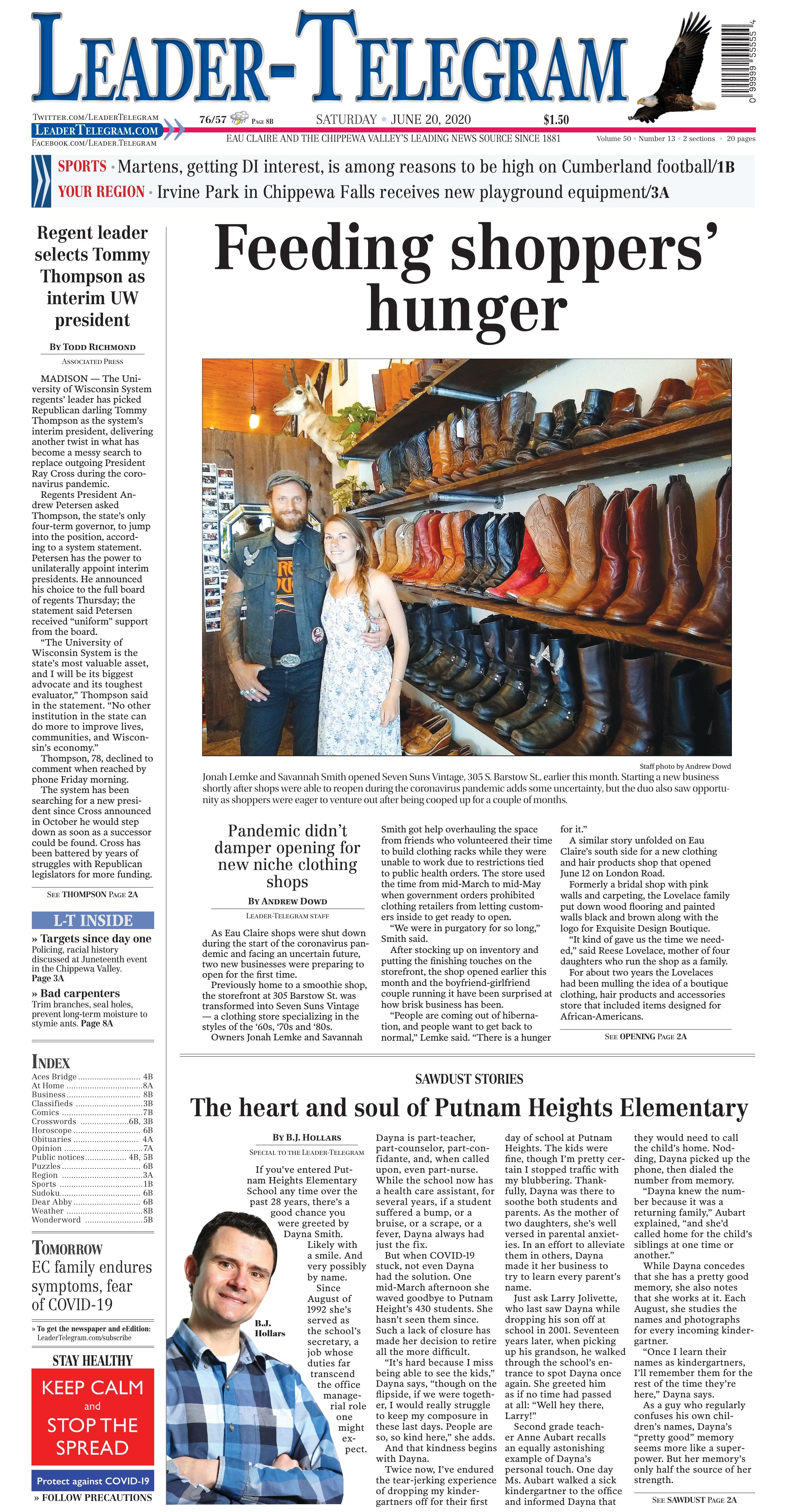