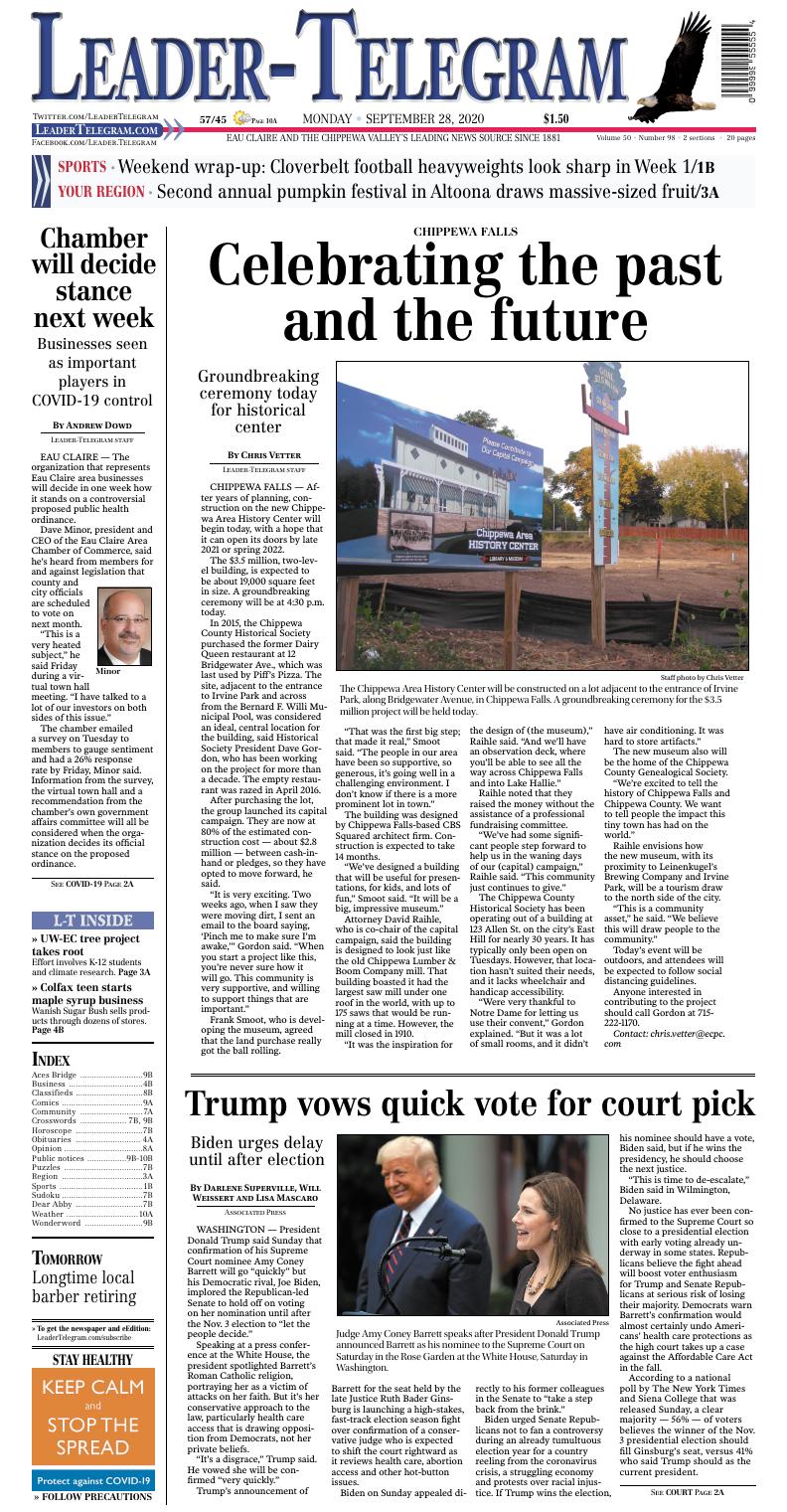 The Chippewa Area History Center will be constructed on a lot adjacent to the entrance of Irvine Park, along Bridgewater Avenue, in Chippewa Falls. A groundbreaking ceremony for the $3.5 million project will be held today.

CHIPPEWA FALLS — After years of planning, construction on the new Chippewa Area History Center will begin today, with a hope that it can open its doors by late 2021 or spring 2022.

In 2015, the Chippewa County Historical Society purchased the former Dairy Queen restaurant at 12 Bridgewater Ave., which was last used by Piff’s Pizza. The site, adjacent to the entrance to Irvine Park and across from the Bernard F. Willi Municipal Pool, was considered an ideal, central location for the building, said Historical Society President Dave Gordon, who has been working on the project for more than a decade. The empty restaurant was razed in April 2016.

After purchasing the lot, the group launched its capital campaign. They are now at 80% of the estimated construction cost — about $2.8 million — between cash-in-hand or pledges, so they have opted to move forward, he said.

“It is very exciting. Two weeks ago, when I saw they were moving dirt, I sent an email to the board saying, ‘Pinch me to make sure I’m awake,’” Gordon said. “When you start a project like this, you’re never sure how it will go. This community is very supportive, and willing to support things that are important.”

Frank Smoot, who is developing the museum, agreed that the land purchase really got the ball rolling.

“That was the first big step; that made it real,” Smoot said. “The people in our area have been so supportive, so generous, it’s going well in a challenging environment. I don’t know if there is a more prominent lot in town.”

“We’ve designed a building that will be useful for presentations, for kids, and lots of fun,” Smoot said. “It will be a big, impressive museum.”

Attorney David Raihle, who is co-chair of the capital campaign, said the building is designed to look just like the old Chippewa Lumber & Boom Company mill. That building boasted it had the largest saw mill under one roof in the world, with up to 175 saws that would be running at a time. However, the mill closed in 1910.

“It was the inspiration for the design of (the museum),” Raihle said. “And we’ll have an observation deck, where you’ll be able to see all the way across Chippewa Falls and into Lake Hallie.”

Raihle noted that they raised the money without the assistance of a professional fundraising committee.

“We’ve had some significant people step forward to help us in the waning days of our (capital) campaign,” Raihle said. “This community just continues to give.”

The Chippewa County Historical Society has been operating out of a building at 123 Allen St. on the city’s East Hill for nearly 30 years. It has typically only been open on Tuesdays. However, that location hasn’t suited their needs, and it lacks wheelchair and handicap accessibility.

“Were very thankful to Notre Dame for letting us use their convent,” Gordon explained. “But it was a lot of small rooms, and it didn’t have air conditioning. It was hard to store artifacts.”

The new museum also will be the home of the Chippewa County Genealogical Society.

“We’re excited to tell the history of Chippewa Falls and Chippewa County. We want to tell people the impact this tiny town has had on the world.”

Raihle envisions how the new museum, with its proximity to Leinenkugel’s Brewing Company and Irvine Park, will be a tourism draw to the north side of the city.

“This is a community asset,” he said. “We believe this will draw people to the community.”

Today’s event will be outdoors, and attendees will be expected to follow social distancing guidelines.

Anyone interested in contributing to the project should call Gordon at 715-222-1170.

EAU CLAIRE — The organization that represents Eau Claire area businesses will decide in one week how it stands on a controversial proposed public health ordinance.

Dave Minor, president and CEO of the Eau Claire Area Chamber of Commerce, said he’s heard from members for and against legislation that county and city officials are scheduled to vote on next month.

“This is a very heated subject,” he said Friday during a virtual town hall meeting. “I have talked to a lot of our investors on both sides of this issue.”

The chamber emailed a survey on Tuesday to members to gauge sentiment and had a 26% response rate by Friday, Minor said. Information from the survey, the virtual town hall and a recommendation from the chamber’s own government affairs committee will all be considered when the organization decides its official stance on the proposed ordinance.

The chamber’s board of directors is scheduled for a special meeting on Monday, Oct. 5, to take a position on how it feels on the ordinance — “good, bad or indifferent,” Minor said.

In addition to the chamber’s stance, Minor urged residents to contact their representatives on the City Council and County Board to express their views before the ordinance comes to a vote.

Kathryn Schauf, Eau Claire County administrator, acknowledged the crucial role that local businesses have played in the community’s response to the coronavirus.

“Business leaders are on the front line to make this work. It is keeping this community going,” she said at Friday’s virtual town hall.

Schauf noted that businesses have faced difficult fiscal realities because of the pandemic, but have also shown they are looking out for the well-being of their employees and clients.

About 1,200 businesses in the Eau Claire area are chamber members. Those businesses have a total of roughly 70,000 employees, Minor said, with the majority being small companies with less than 25 workers.

“So we look out for everybody,” he said.

Scott Rogers, the chamber’s government affairs director, said whatever position the organization takes will consider the impact it will have on businesses as well as the overall best path forward for the community.

To date, the local business group has been supportive of the Health Department during the COVID-19 pandemic. The chamber even launched its “We ask that you wear a mask” informational campaign in July to promote wearing face masks at businesses before the governor made it mandatory on Aug. 1.

Acknowledging debate within the community over the proposed local ordinance, the chamber hosted Friday’s virtual town hall meeting, attracting an audience of more than 200 people.

Seeking to make the case for the ordinance, Eau Claire’s city manager said the community is at a crossroads when it comes to the coronavirus pandemic.

When deciding between letting the virus run its course by reducing public health orders to just suggestions or continuing with requirements based on science and local data, Dale Peters recommends the latter.

“We as a community chose to lead rather than be led by the disease,” he said.

The ordinance would allow the local health director to continue issuing public health orders, which has been done since mid-May after the state Supreme Court struck down the statewide safer-at-home order. Local public health orders have included a requirement for social distancing, reduced capacities for businesses and limits on the size of public gatherings.

Lieske Giese, director of the Eau Claire City-County Health Department, credited those measures for keeping the community’s level of COVID-19 down to a manageable level, but said that’s no reason to stop practicing those precautions, especially while the state continues to have a problem.

“Wisconsin is seen as a hot spot at the moment,” she said, noting the U.S. Centers for Disease Control and Prevention have rated the state at a high risk for community spread of COVID-19.

While she did compliment the general compliance of area residents with the health orders, she noted that the number of new cases seen in Eau Claire has been rising, especially this month. Early in the pandemic, the county set a goal of 10 new cases a day, but there have been times in recent weeks where it’s reached seven times that, she said.

City and county officials have repeatedly stated that the proposed ordinance does not expand on powers already given to the top local public health official by state statutes. And the local ordinance adds legislative oversight so the City Council or County Board could vote on whether health orders should be enforced or voluntary.

Since the proposal became public earlier this month, it has drawn protests from Eau Claire area residents who believe it is a government overreach. As proposed, the ordinance would not apply just to COVID-19, but remain available for potential future community wide public health threats.

One of those watching Friday morning’s virtual town hall was Rebecca Zimmerman, who started the Facebook group “Eau Claire Parents wanting to return to normal,” which has grown to just over 1,200 members since starting in August.

After watching the town hall, Zimmerman said she was disappointed that more people weren’t given a chance to speak and seek clarification on unclear answers given by officials. Still, she was looking forward to the chamber’s promise to follow up on other questions submitted for the event that couldn’t be answered during the hourlong virtual meeting.

She and others have criticized the ordinance’s language as too vague and putting too much power in the hands of one unelected official. Members of the group have urged public officials to hold in-person public hearings — as opposed to virtual meetings — so residents can more effectively ask questions and express their stances on the topic.

The proposed ordinance includes the ability for the Health Department to issue $200 fines for people or businesses that violate health orders, as well as the potential for a business to lose a license granted by the city.

However, the primary method the Health Department has used so far and expects to continue is educating businesses and individuals who haven’t been following public health orders, Schauf said.

“Enforcement would be very limited to the most egregious circumstances,” she said. 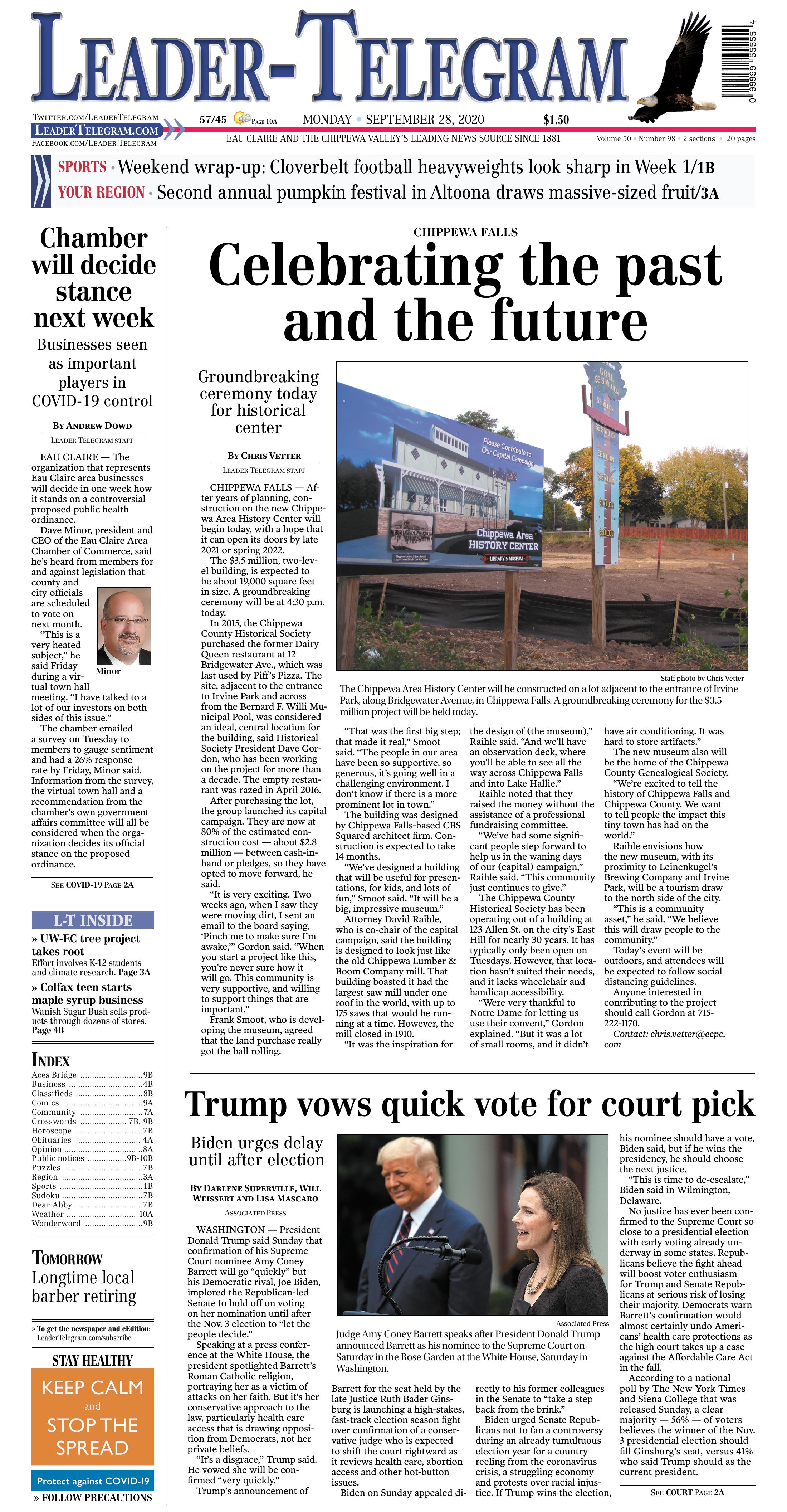