Kris Ruckman of Eau Claire shares messages in late March with her 97-year-old father, Bob Anderson, through a window at River Pines in Altoona. Ruckman, who was unable to visit her dad in the nursing home after visitors were barred the previous week as a precaution against COVID-19, made signs for her dad to read, such as this one saying “Miss you,” because using a phone is difficult because of his poor hearing.

EAU CLAIRE — The past year has been a roller coaster. It began with presidential elections on the horizon and was sidetracked in the spring when COVID-19 exploded across the country. But there has been a lot more than politics and pandemic happening in the Chippewa Valley.

Here’s the first part of our look back at headlines from 2020, covering January through March.

Frances Hagedorn was the New Year’s baby for Eau Claire.

Woodman’s sued the city of Eau Claire over its tax bill. Several companies challenged their bills over the course of the year, saying the city’s assessments were far too high.

The gap in student populations for Eau Claire’s public high schools dipped to only 109 students, the closest figure in a very long time.

Barron County authorities identified a murder victim known only as John Doe since 1982. 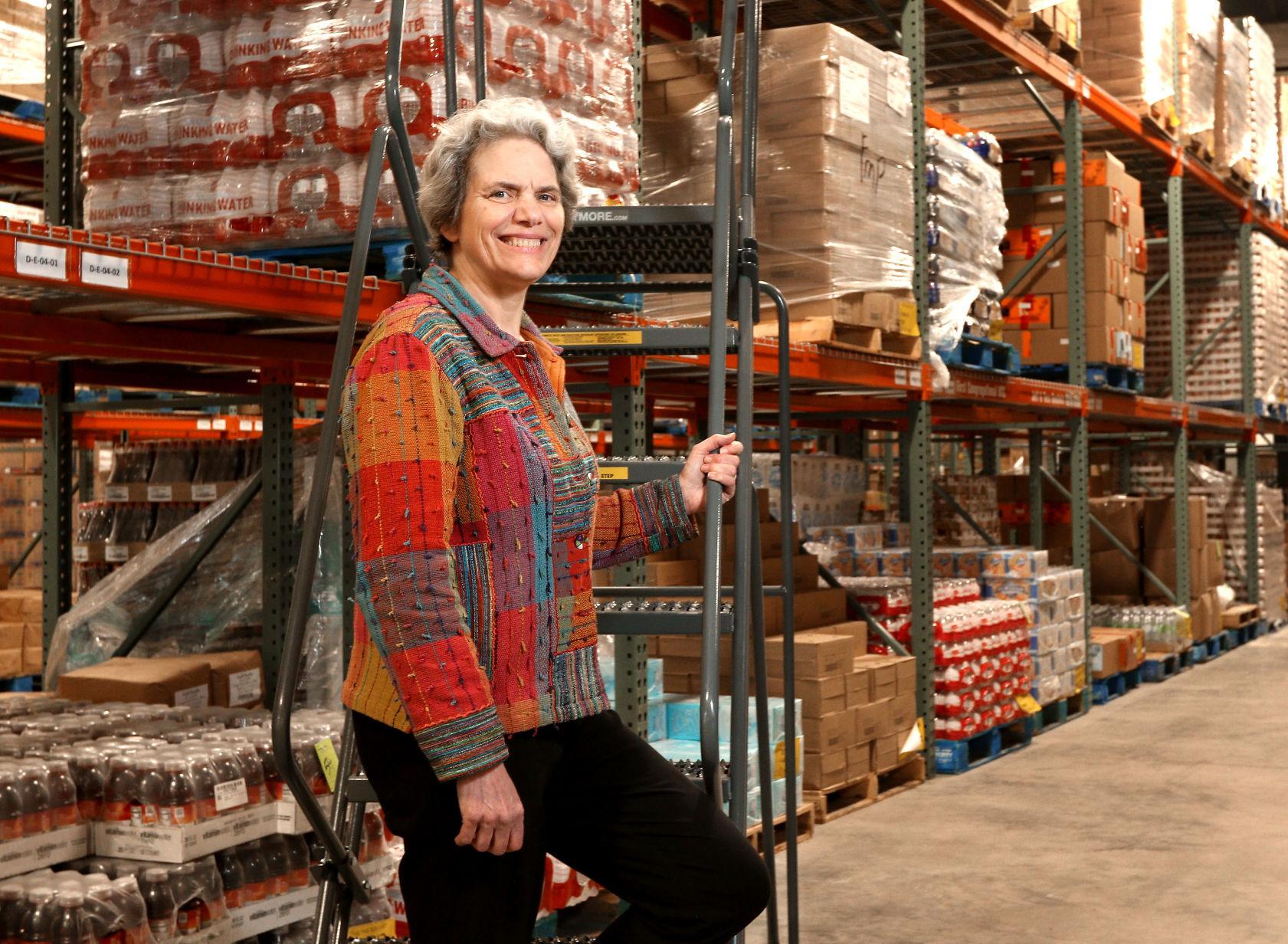 Emily Moore announced her retirement from Feed My People.

Two area men continued an unusually strong bond as Kyle Brandt donated a kidney to Don Elliott. By the friends’ count, it was the third time Brandt had saved Elliott’s life.

A derailment in Dunn County spilled 38 train cars off the track. Most were empty, but the derailment still meant some repairs to the line. 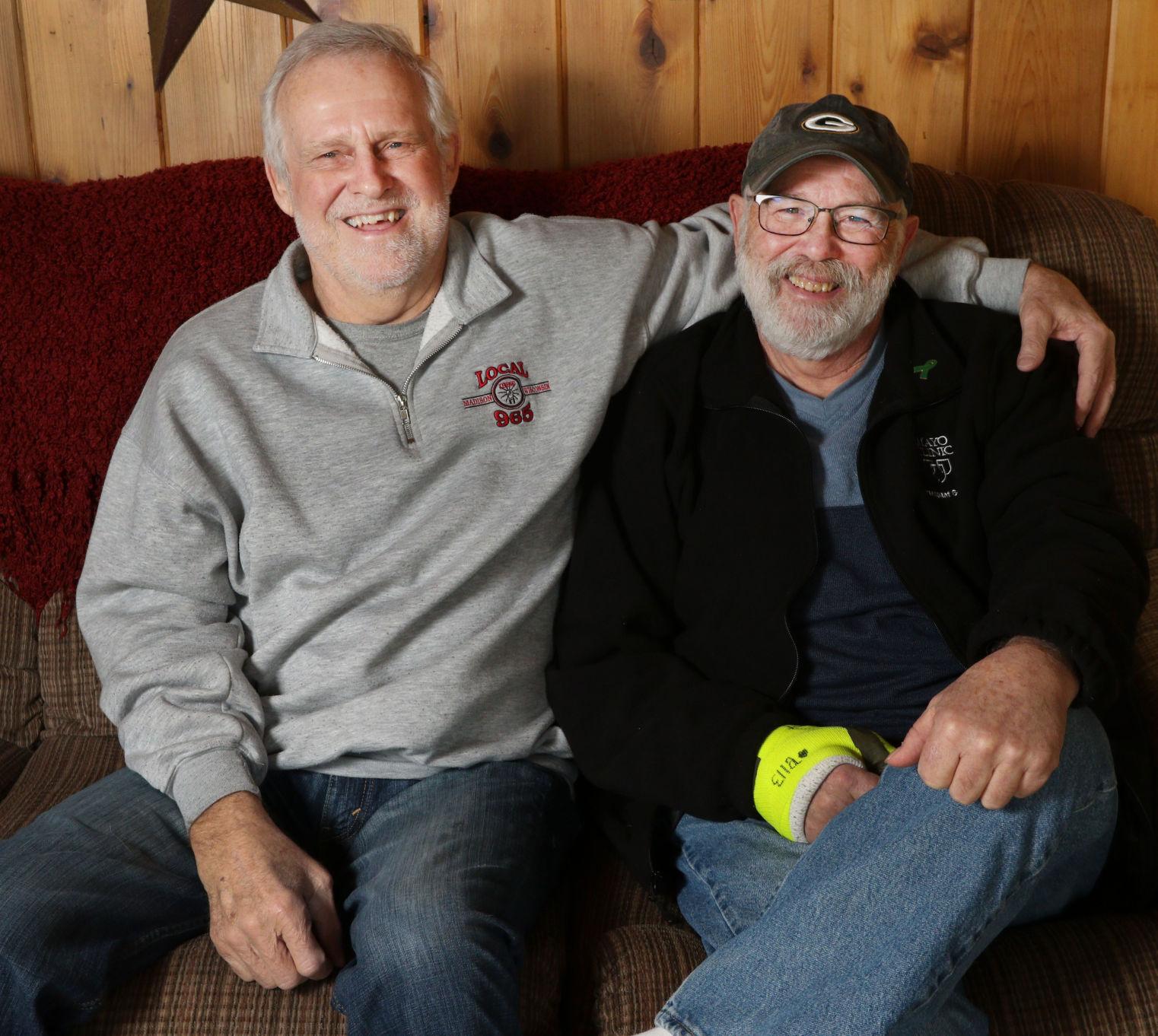 Don Elliott, left, of the Chippewa County town of Wheaton received a kidney in October from Kyle Brandt of Tilden. The men, both 68, have been best friends for 60 years. View more photos at LeaderTelegramPhotos.com.

Chippewa Valley Technical College announced it would seek voters’ approval for a $48.8 million referendum. The money was earmarked, in part, for consolidating a program previously spread across multiple sites into one facility.

Phillips-Medisize announced it would close its factory. The move meant a loss of 230 jobs from the Chippewa Valley.

Hunters greeted a proposal for a 19-day hunting season with some skepticism.

The LGBTQ+ Center in Eau Claire moved after the utilities were shut off at the State Theater.

Officials unveiled concept art for a parking ramp behind City Hall and a new plaza outside the library.

Eau Claire announced plans to give some funding for the Sonnentag Event and Recreation Complex.

Questions continued to mount around Joe Luginbill after the State Theater’s utilities were cut off and the work at the planned Smile House shut down. The website for the Luginbill Children’s Foundation and social media accounts connected with it were also taken offline.

Two UW-Eau Claire professors said their families were safe amid a virus outbreak in China.

The United States declared an emergency as the newly-discovered coronavirus began spreading out of Asia.

Police announced an investigation into the Joe Luginbill’s foundation and what they called “suspicious financial transactions.” In his first statements since the problems became public, Luginbill said he had been “in denial” over the bills that had amassed. 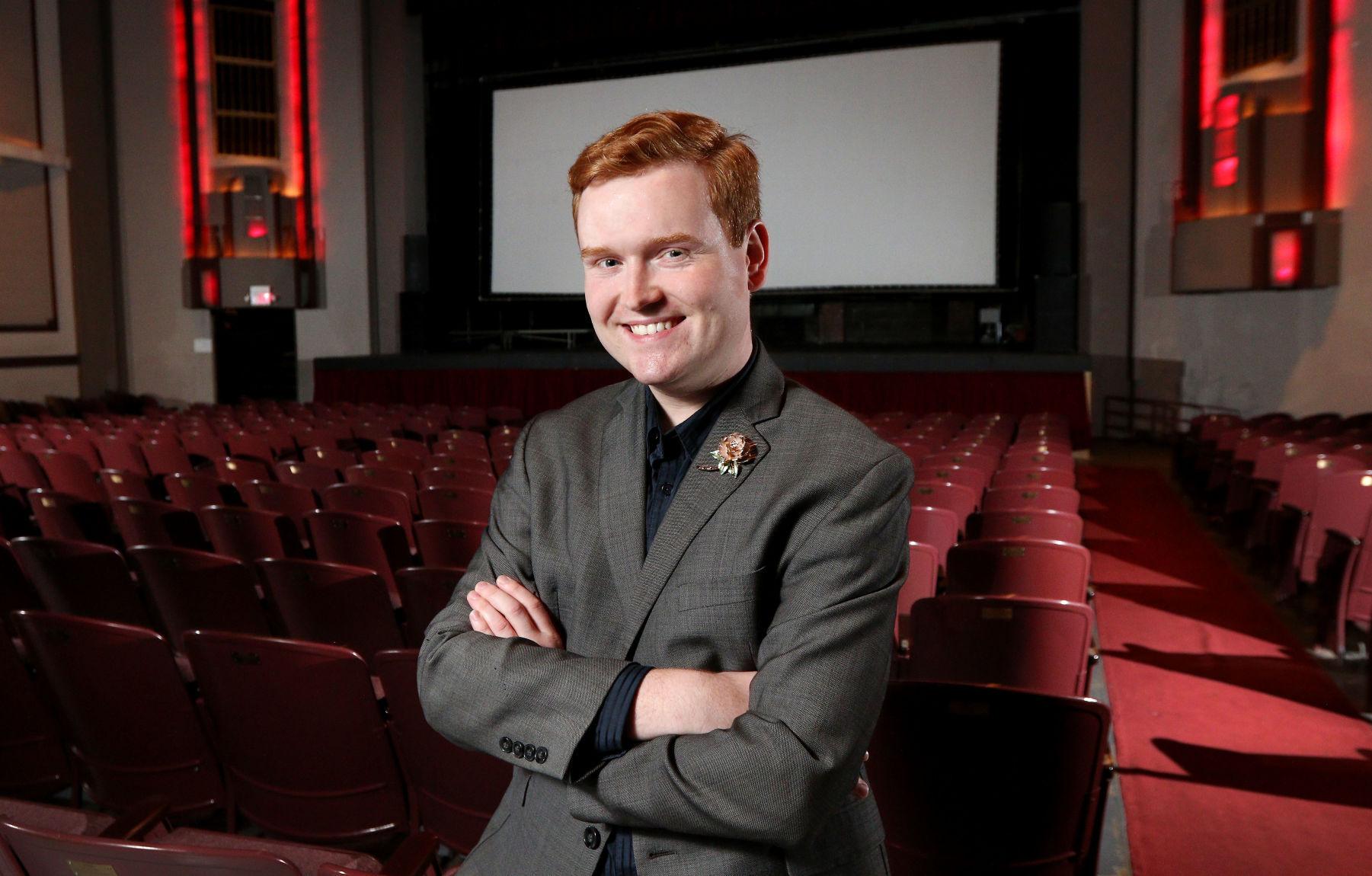 Joe Luginbill, shown in October 2019 at The State Theatre and Community Center in Eau Claire, reopened the theater last year under the leadership the Luginbill Children’s Foundation. That foundation’s finances have been under investigation by the Eau Claire Police Department for a full year.

Dale Peters announced his plans to retire from his position as Eau Claire’s city manager.

UW-Eau Claire officials said restorative justice programs might be an option for several football players who had shared racist memes and comments on social media.

A fire damaged part of the UW-Eau Claire’s science building, but it remained open with only a small area off limits.

A fire at The Metro forced some downtown events to move.

An investigation began after allegations of a toxic environment created by a UW-Eau Claire administrator. Albert Colom announced plans to resign shortly after the investigation was announced.

Daniel Peggs, Altoona’s schools superintendent, was arrested by federal authorities and charged with sex trafficking of a minor. The arrest sent shockwaves through the Chippewa Valley. Ron Walsh, who had previously served as interim superintendent for the district, agreed to return in that same role.

Altoona announced property values in the community had doubled over the course of the preceding decade.

Katherine Frank began her tenure as chancellor at UW-Stout.

Eau Claire County began testing for the COVID virus. No cases had yet been found locally, but concerns were rising. 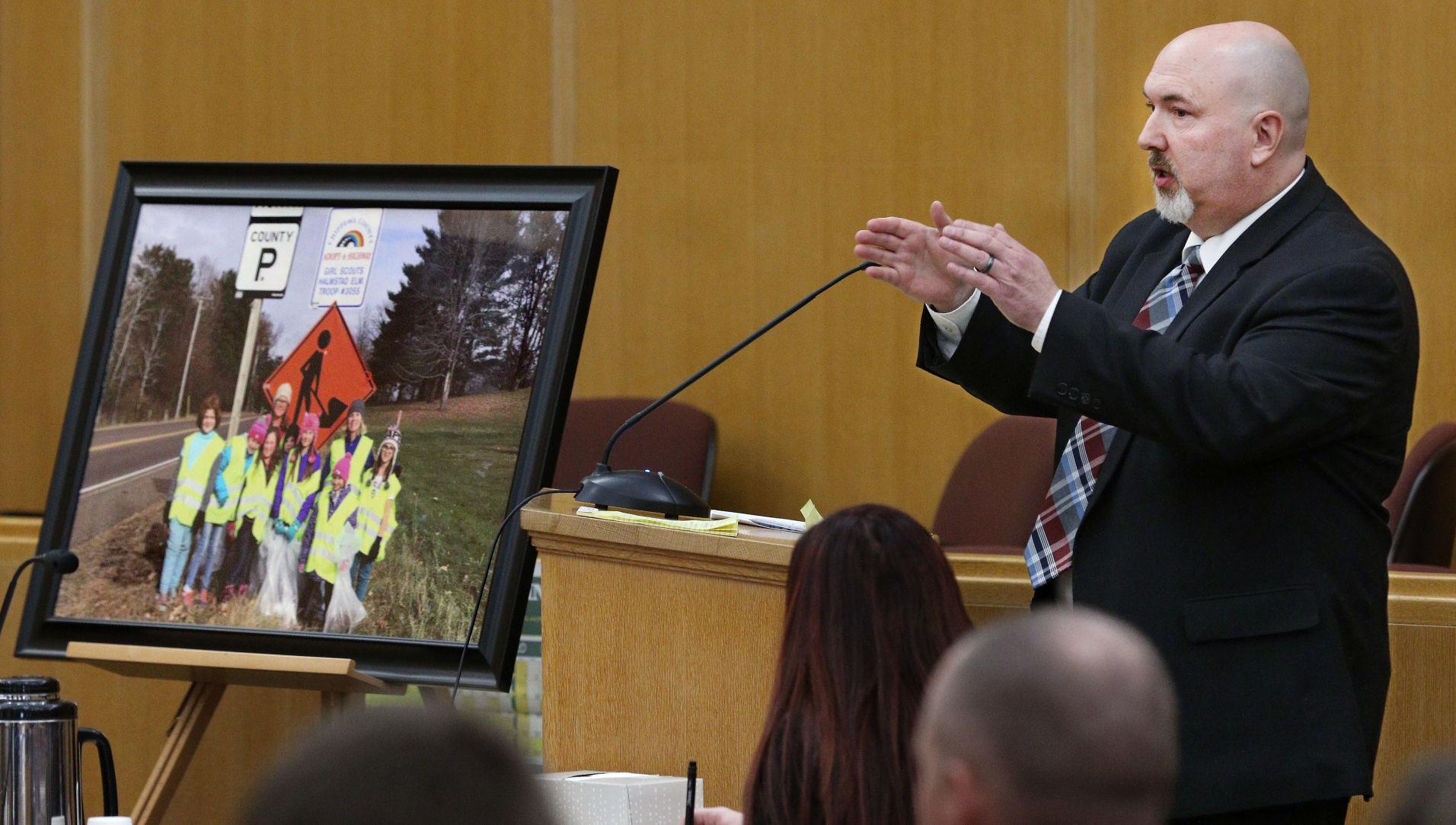 With a photo of Girl Scouts on Highway P taken before the fatal accident, Chippewa County District Attorney Wade Newell spoke before Colten Treu was sentenced to 54 years in prison in March. View more photos at LeaderTelegramPhotos.com.

Colten Treu was sentenced to 54 years in prison. He was behind the wheel in a horrific crash that killed four people, including three Girl Scouts in 2018. He admitted he had been huffing aerosol fumes before the crash.

The Pablo Center closed, and classes shut down for the Eau Claire school district. Stores began to run short of items like toilet paper and paper towels.

The Mayo Clinics announced a no-visitor policy at their hospitals. 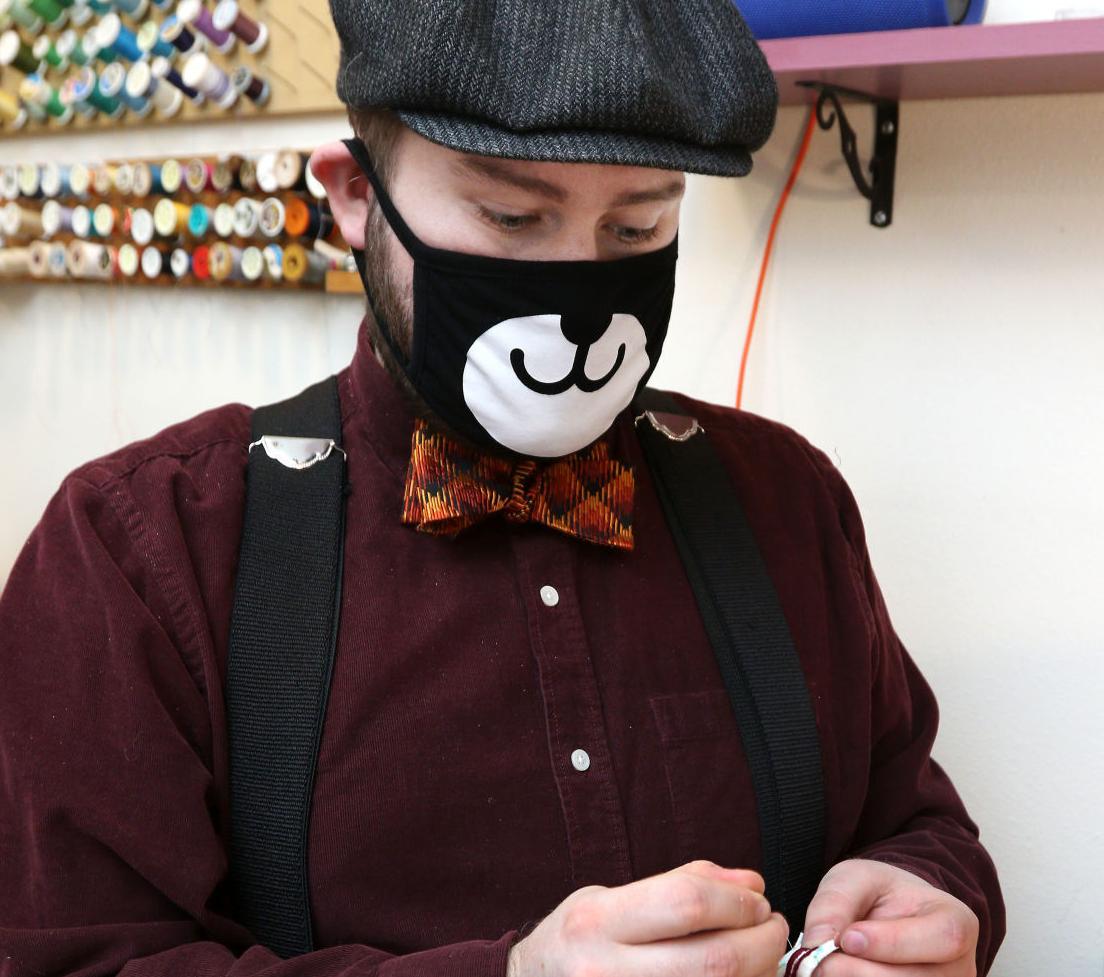 Costume designer Jackson Berhow wore his own mask as he made health face masks last March at the Eau Claire Children’s Theatre. Berhow hails from Washington state and said friends and relatives asked him about making masks. View more photos at LeaderTelegramPhotos.com.

State health officials said up to 1,000 people in Wisconsin could die without a stay at home order. That figure proved to be a low estimate by year’s end.

The 45th Parallel distillery began making hand sanitizer, one of the items that had been in short supply since the pandemic arrived.

Dale Peters delayed his retirement to help the city manage the COVID crisis.

Area residents stepped up as businesses shut down. The economic pain meant more demand for food assistance, and volunteers helped Feed My People meet the need.

The massive bill includes $1.4 trillion to fund government agencies through September and contains other end-of-session priorities such as money for cash-starved transit systems and an increase in food stamp benefits.

Democrats are promising more aid to come once President-elect Joe Biden takes office, but Republicans are signaling a wait-and-see approach.

Trump blindsided members of both parties and upended months of negotiations when he demanded last week that the package — already passed the House and Senate by large margins and believed to have Trump’s support — be revised to include larger relief checks and scaled-back spending.

In the face of growing economic hardship and spreading disease, lawmakers urged Trump on Sunday to sign the legislation immediately, then have Congress follow up with additional aid. Aside from unemployment benefits and relief payments to families, money for vaccine distribution, businesses, cash-starved public transit systems and more is on the line. Protections against evictions also hang in the balance.

Republican Sen. Pat Toomey of Pennsylvania said he understood that Trump “wants to be remembered for advocating for big checks, but the danger is he’ll be remembered for chaos and misery and erratic behavior if he allows this to expire.”

Toomey added: “So I think the best thing to do, as I said, sign this and then make the case for subsequent legislation.”

Republican Rep. Adam Kinzinger of Illinois said too much is at stake for Trump to “play this old switcheroo game.”

Days ago, Democrats said they would call House lawmakers back to Washington for a vote Monday on Trump’s proposal to send out $2,000 relief checks, instead of the $600 approved by Congress. But the idea is likely to die in the Republican-controlled Senate, as it did among Republicans in the House during a rare Christmas Eve session. Democrats were also considering a vote Monday on a stopgap measure aimed at keeping the government running until President-elect Joe Biden is inaugurated Jan. 20.

Lauren Bauer of the Brookings Institution had calculated that at least 11 million people would lose aid immediately if Trump failed to sign the legislation; millions more would exhaust other unemployment benefits within weeks.

How and when people are affected by the lapse depends on the state they live in, the program they are relying on and when they applied for benefits.

About 9.5 million people, however, had been relying on the Pandemic Unemployment Assistance program that expired altogether Saturday. That program made unemployment insurance available to freelancers, gig workers and others normally not eligible. After receiving their last checks, those recipients will not be able to file for more aid, Stettner said.

EAU CLAIRE — A homicide charge has been filed against an Eau Claire man who authorities say stabbed another man on Thanksgiving Day at an Eau Claire residence.

Weiberg was originally charged with felony counts of aggravated battery and second-degree recklessly endangering safety in connection with the Nov. 26 incident.

The charges were enhanced because the stabbing victim, Travis L. Smith, 37, of Laurel, Ind., died Dec. 3 at a Rochester, Minn., hospital.

A forensic autopsy of Smith was conducted Dec. 4 at the Southern Minnesota Regional Medical Examiner’s Office in Rochester. Preliminary results indicated Smith’s cause of death was a stab wound to the chest and the manner of death is homicide.

If convicted of the enhanced charges, Weiberg could be sentenced to up to 47 years in prison.

Weiberg remains held in the Eau Claire County Jail on a $20,000 cash bail.

Weiberg is scheduled for an arraignment on Jan. 4.

According to Eau Claire police and the criminal complaint:

Police responded to the 600 block of Franklin Street shortly after 1 a.m. Thanksgiving Day after a caller reported a stabbing. When officers arrived, two people were in a backyard, and one person was covered in blood near an unresponsive man on the ground.

Officers used a chest seal to keep Smith from drawing air into his chest and provided critical aid. The witness told them Weiberg, who was inside the home, had stabbed Smith. The wound was just above Smith’s heart.

Smith was taken to the Mayo Clinic Health System in Eau Claire and underwent emergency surgery for lacerated arteries and damage to his heart and lungs.

Weiberg came outside when officers ordered him to do so, but refused to show his hands or comply with orders to surrender. Officers used a less-lethal “foam sponge round” to gain time to place Weiberg in custody.

Weiberg had gotten into a fight with Smith, which resulted in facial injuries to Weiberg. He stabbed the man in response.

The criminal complaint offered different versions of events from Weiberg, who said he was attacked by Smith inside the house, and a witness who said the fight that led to the stabbing took place outside.

Both accounts confirm there were previous incidents of “pushing and shoving” between the two earlier in the day.

Prosecutors charged Weiberg as a repeat offender, citing a 2018 conviction for strangulation and suffocation.

Smith was later transferred to the Rochester, Minn., hospital for treatment.