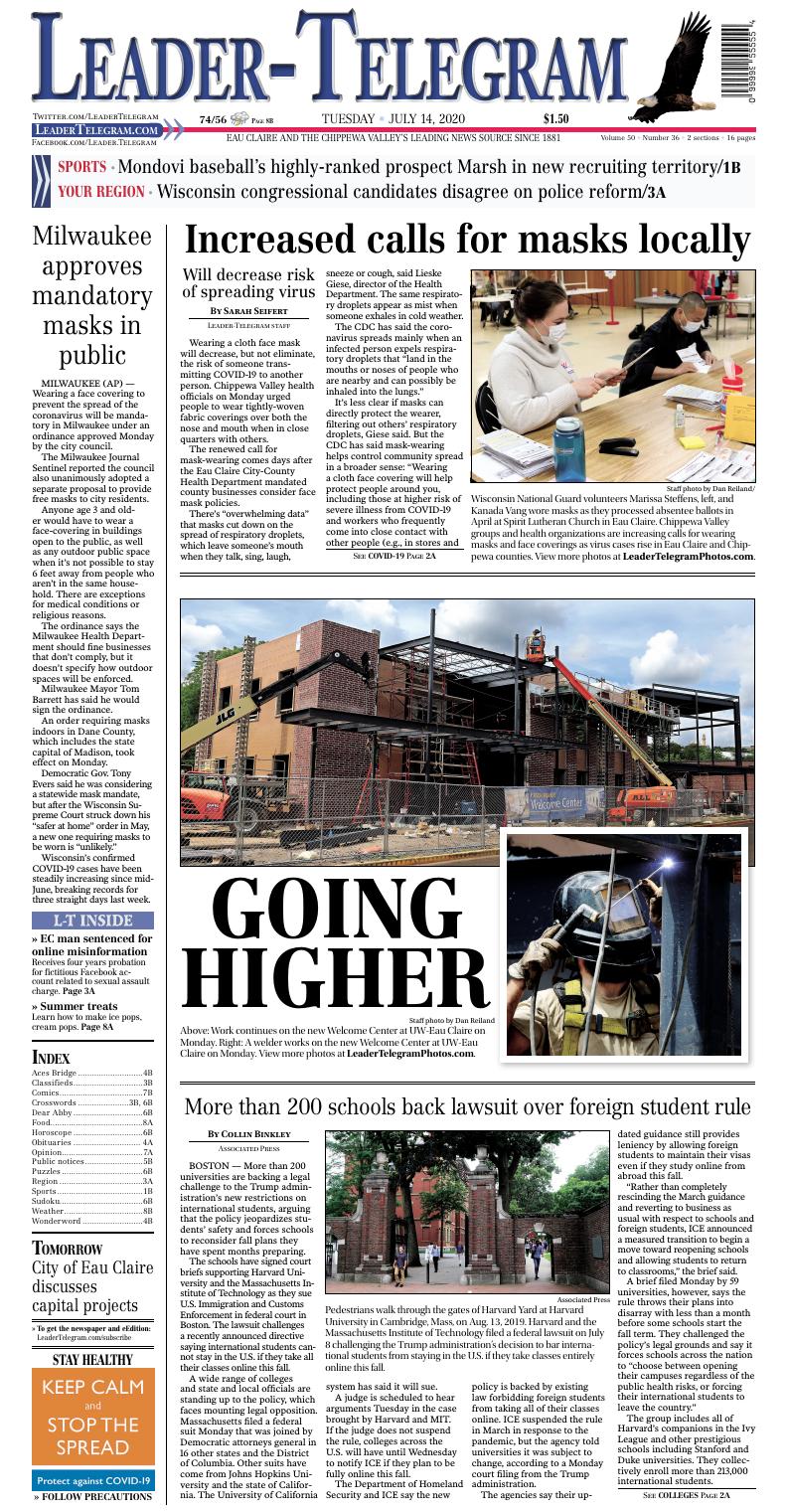 Wearing a cloth face mask will decrease, but not eliminate, the risk of someone transmitting COVID-19 to another person. Chippewa Valley health officials on Monday urged people to wear tightly-woven fabric coverings over both the nose and mouth when in close quarters with others.

There’s “overwhelming data” that masks cut down on the spread of respiratory droplets, which leave someone’s mouth when they talk, sing, laugh, sneeze or cough, said Lieske Giese, director of the Health Department. The same respiratory droplets appear as mist when someone exhales in cold weather.

The CDC has said the coronavirus spreads mainly when an infected person expels respiratory droplets that “land in the mouths or noses of people who are nearby and can possibly be inhaled into the lungs.”

It’s less clear if masks can directly protect the wearer, filtering out others’ respiratory droplets, Giese said. But the CDC has said mask-wearing helps control community spread in a broader sense: “Wearing a cloth face covering will help protect people around you, including those at higher risk of severe illness from COVID-19 and workers who frequently come into close contact with other people (e.g., in stores and restaurants),” Giese said.

“My wearing a face mask is a signal I care about the people around me.”

Masks or face coverings should be worn over the nose and mouth and be made of tightly-woven fabric. People shouldn’t wear surgical masks or respirators, including N-95s, according to the CDC — those are “critical supplies” and should be reserved for health care workers at the moment.

But even if masks are worn correctly, the risk of attending gatherings is tricky, Giese said, adding that social distancing and staying six feet apart from others is by far the best way to cut down risk.

“If you only kind of wear (the mask) and use that as a way to think you’re protecting others, but don’t keep physical distance, we’re not in any better of a spot,” she said.

The city of Eau Claire is weighing in on the matter, too. Two City Council members proposed a resolution urging residents to wear masks in public, and the resolution is going before the council Tuesday. The Eau Claire Area Chamber of Commerce has also been part of the discussion, encouraging mask-wearing in a statement last week.

Two new cases were identified in Eau Claire County on Monday, bringing it up to a total of 17 new cases since Friday. Of the county’s 340 total cases, about 235 have recovered, according to county data. Over 10,000 tests in the county have been negative.

Statewide, 494 new cases were confirmed Monday, bringing the state’s total cases to just shy of 37,000. No new deaths were reported Monday, and more than 28,000 people have recovered.

Pedestrians walk through the gates of Harvard Yard at Harvard University in Cambridge, Mass, on Aug. 13, 2019. Harvard and the Massachusetts Institute of Technology filed a federal lawsuit on July 8 challenging the Trump administration’s decision to bar international students from staying in the U.S. if they take classes entirely online this fall.

A U.S. Immigration and Customs Enforcement (ICE) officer looks on during an operation in Escondido, Calif, on July 8, 2019. International students will be forced to leave the U.S. or transfer to another college if their schools offer classes entirely online this fall, under new guidelines issued Monday by federal immigration authorities.

BOSTON — More than 200 universities are backing a legal challenge to the Trump administration’s new restrictions on international students, arguing that the policy jeopardizes students’ safety and forces schools to reconsider fall plans they have spent months preparing.

The schools have signed court briefs supporting Harvard University and the Massachusetts Institute of Technology as they sue U.S. Immigration and Customs Enforcement in federal court in Boston. The lawsuit challenges a recently announced directive saying international students cannot stay in the U.S. if they take all their classes online this fall.

A wide range of colleges and state and local officials are standing up to the policy, which faces mounting legal opposition. Massachusetts filed a federal suit Monday that was joined by Democratic attorneys general in 16 other states and the District of Columbia. Other suits have come from Johns Hopkins University and the state of California. The University of California system has said it will sue.

A judge is scheduled to hear arguments Tuesday in the case brought by Harvard and MIT. If the judge does not suspend the rule, colleges across the U.S. will have until Wednesday to notify ICE if they plan to be fully online this fall.

The Department of Homeland Security and ICE say the new policy is backed by existing law forbidding foreign students from taking all of their classes online. ICE suspended the rule in March in response to the pandemic, but the agency told universities it was subject to change, according to a Monday court filing from the Trump administration.

The agencies say their updated guidance still provides leniency by allowing foreign students to maintain their visas even if they study online from abroad this fall.

“Rather than completely rescinding the March guidance and reverting to business as usual with respect to schools and foreign students, ICE announced a measured transition to begin a move toward reopening schools and allowing students to return to classrooms,” the brief said.

A brief filed Monday by 59 universities, however, says the rule throws their plans into disarray with less than a month before some schools start the fall term. They challenged the policy’s legal grounds and say it forces schools across the nation to “choose between opening their campuses regardless of the public health risks, or forcing their international students to leave the country.”

The group includes all of Harvard’s companions in the Ivy League and other prestigious schools including Stanford and Duke universities. They collectively enroll more than 213,000 international students.

“These students are core members of our institutions,” the schools wrote. “They make valuable contributions to our classrooms, campuses and communities — contributions that have helped make American higher education the envy of the world.”

The colleges are asking the court to block the rule as quickly as possible, saying it’s already being used to turn students away. Last Wednesday, a DePaul University student was prevented from entering the country after arriving in San Francisco, according to the filing. Harvard previously said one of its students from Belarus was turned away from a flight at an airport in Minsk last week.

If the policy is upheld, schools could be forced to reconsider their fall plans. Princeton last week said first-year students and juniors could live on campus this fall, while sophomores and seniors would replace them during the spring semester. But that plan was based on the understanding that foreign students could continue remote learning from the U.S., the filing said.

“Princeton now may be forced to reassess its plan, with just weeks to go before the fall semester, lest sophomore and senior international students be forced to leave the country — and potentially be unable to return for the spring,” according to the brief.

A separate coalition of 180 colleges filed a brief saying colleges were “blindsided” by the policy. The group, known as the Presidents’ Alliance on Higher Education and Immigration, said it was a reversal of a March 13 directive from ICE that waived limitations around online education for foreign students “for the duration of the emergency.” They point to data suggesting the number of new coronavirus cases in the U.S. is higher now than it was in March.

“All seem to agree the emergency remains ongoing, but ICE’s policy has inexplicably changed,” the group wrote.

The directive also stands to hurt colleges financially, the group wrote. International students typically pay the highest tuition rates and rarely are eligible for scholarships. The alliance said many colleges risk losing millions of dollars over the policy, including Northern Virginia Community College, which estimates it could lose nearly $10 million in tuition from foreign students.

A separate brief filed by the Princeton Theological Seminary says the policy would bring “crippling consequences” from a funding perspective. The seminary said its international ties include many foreign donors who would find the guidance “such a shocking affront that PTS’ relationships with those donors may never recover.”

Under the new rule, international students will be forced to leave the U.S. or transfer to another college if their schools operate entirely online this fall. New visas will not be issued to students at those schools, ICE said, and others at schools offering a mix of online and in-person courses will be barred from taking all of their classes online.

It would apply even if an outbreak forces schools to shift classes entirely online mid-term, according to the guidance.

The policy was issued the same day Harvard announced that its first-years would be invited to campus but that all undergraduate classes will be held online.

The suit from Harvard and MIT argues that ICE issued the policy without offering any justification and without allowing the public to respond. It also says the agency is breaking from its March 13 promise to provide flexibility during the pandemic.

Wisconsin Attorney General Josh Kaul is one of 18 attorneys general that joined the lawsuit. More than 200 universities back the legal challenge, arguing that the new Immigration and Customs Enforcement policy jeopardizes students’ safety and forces schools to reconsider fall plans they have spent months preparing.

The lawsuit challenges a recently announced directive saying international students cannot stay in the U.S. if they take all their classes online this fall.

“We fully support the attorney general’s action today joining the lawsuit challenging the ICE rules regarding international students,” Thompson said in a statement. “While we provided background for the lawsuit, our belief is that our universities’ planned hybrid model of teaching delivery during the fall 2020 semester ensures our compliance with the rules if they are upheld.” 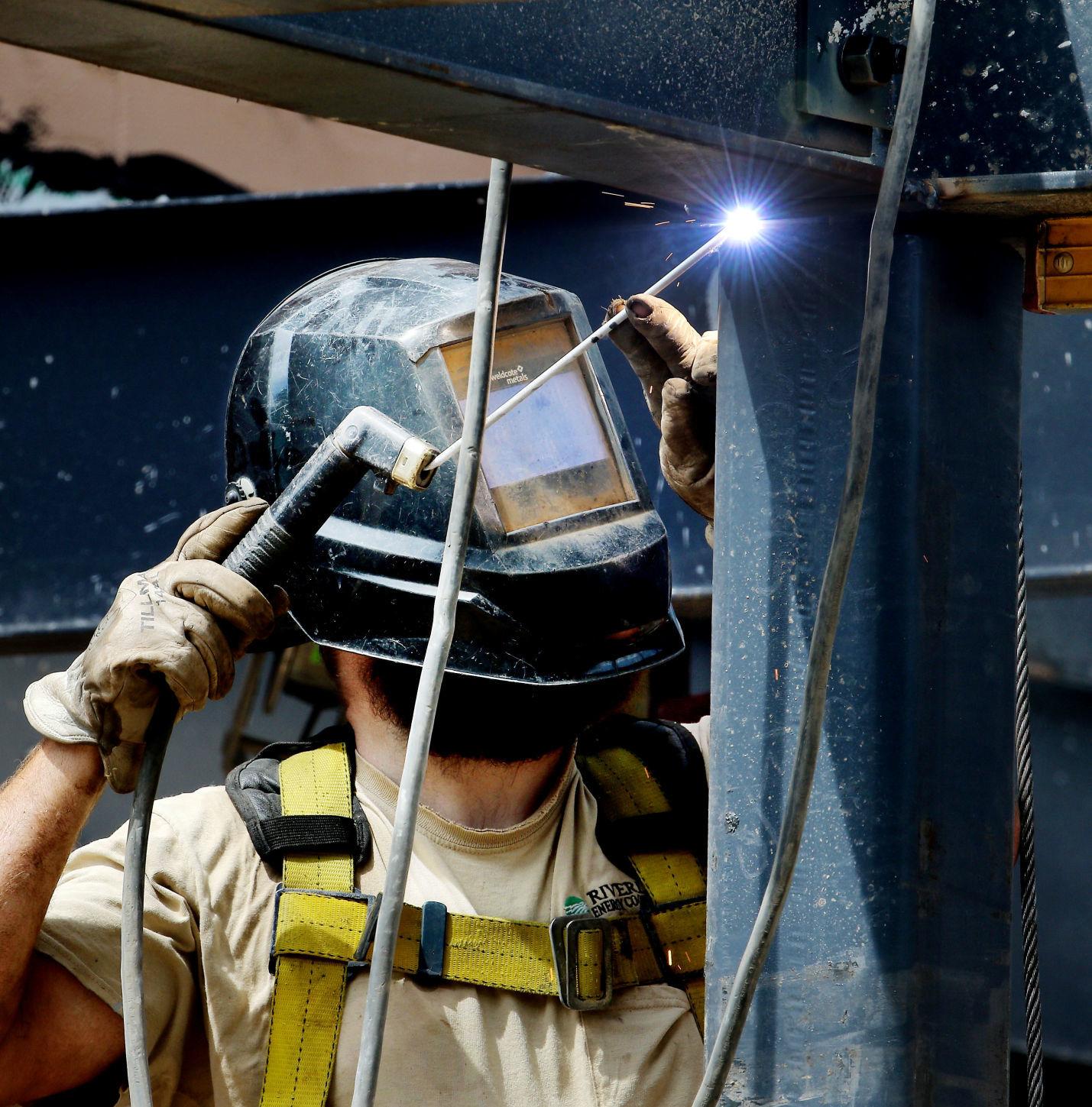 A welder works on the new Welcome Center at UW-Eau Claire on Monday. View more photos at LeaderTelegramPhotos.com.

MILWAUKEE (AP) — Wearing a face covering to prevent the spread of the coronavirus will be mandatory in Milwaukee under an ordinance approved Monday by the city council.

Anyone age 3 and older would have to wear a face-covering in buildings open to the public, as well as any outdoor public space when it’s not possible to stay 6 feet away from people who aren’t in the same household. There are exceptions for medical conditions or religious reasons.

The ordinance says the Milwaukee Health Department should fine businesses that don’t comply, but it doesn’t specify how outdoor spaces will be enforced.

Milwaukee Mayor Tom Barrett has said he would sign the ordinance.

An order requiring masks indoors in Dane County, which includes the state capital of Madison, took effect on Monday.

Democratic Gov. Tony Evers said he was considering a statewide mask mandate, but after the Wisconsin Supreme Court struck down his “safer at home” order in May, a new one requiring masks to be worn is “unlikely.” 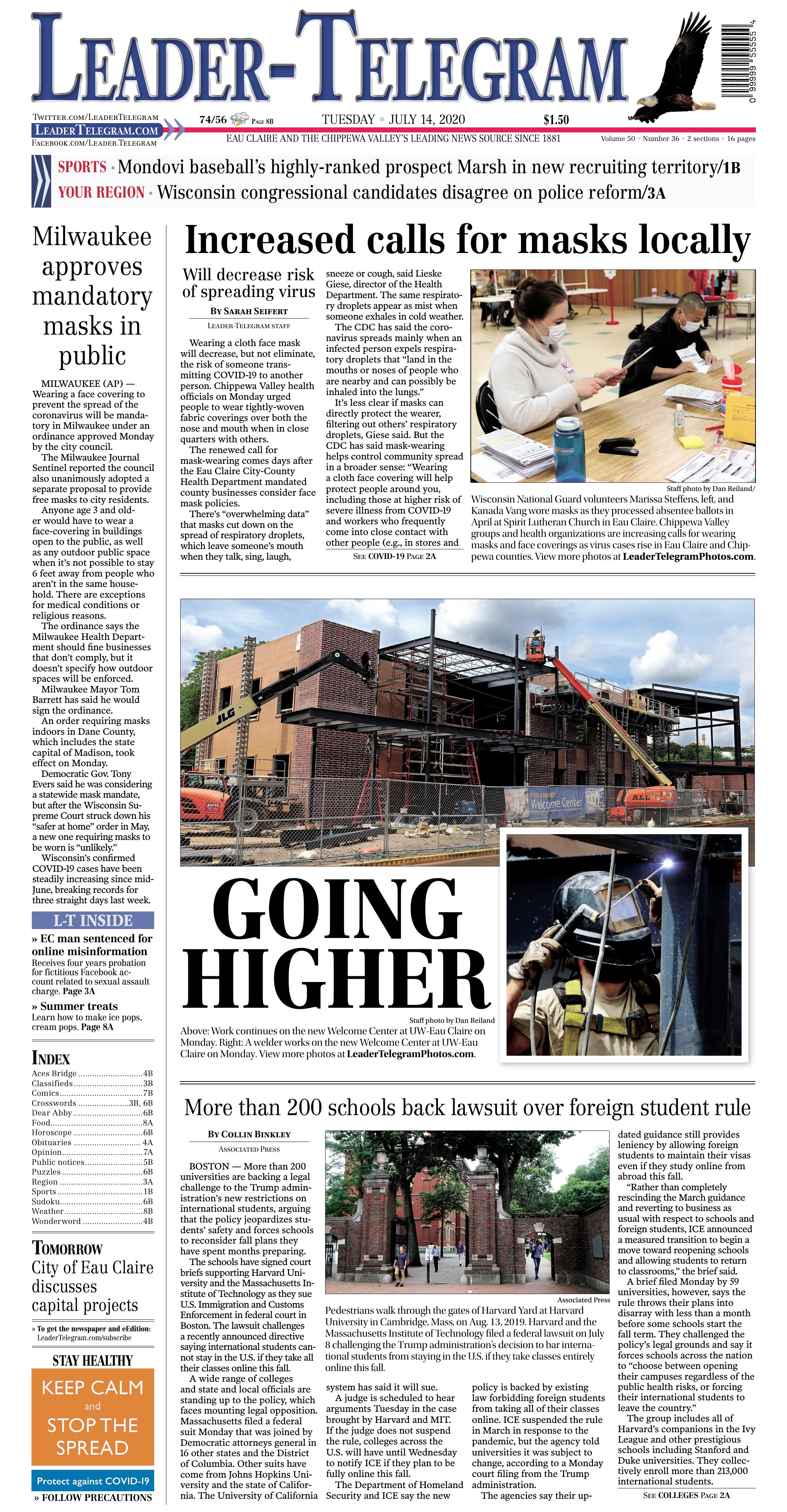