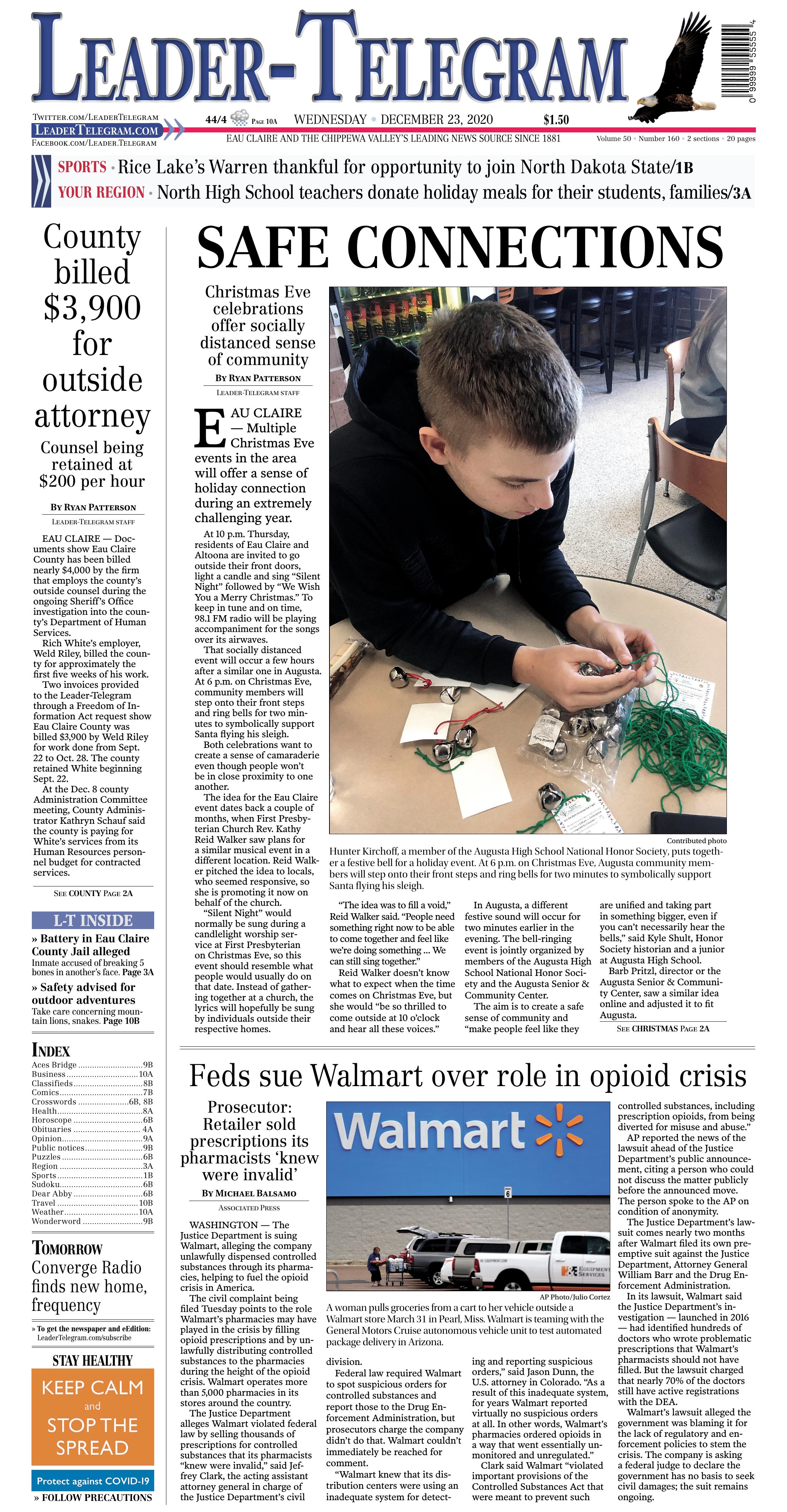 Hunter Kirchoff, a member of the Augusta High School National Honor Society, puts together a festive bell for a holiday event. At 6 p.m. on Christmas Eve, Augusta community members will step onto their front steps and ring bells for two minutes to symbolically support Santa flying his sleigh.

Members of the Augusta High School National Honor Society put together festive bells for a holiday event. Students with their faces shown are Megan Guntner, left, and Emily Mayer.

At 6 p.m. on Christmas Eve, Augusta community members will step onto their front steps and ring bells for two minutes to symbolically support Santa flying his sleigh. The local event is one that offers a sense of holiday connection during a challenging year.

EAU CLAIRE — Multiple Christmas Eve events in the area will offer a sense of holiday connection during an extremely challenging year.

At 10 p.m. Thursday, residents of Eau Claire and Altoona are invited to go outside their front doors, light a candle and sing “Silent Night” followed by “We Wish You a Merry Christmas.” To keep in tune and on time, 98.1 FM radio will be playing accompaniment for the songs over its airwaves.

That socially distanced event will occur a few hours after a similar one in Augusta. At 6 p.m. on Christmas Eve, community members will step onto their front steps and ring bells for two minutes to symbolically support Santa flying his sleigh.

Both celebrations want to create a sense of camaraderie even though people won’t be in close proximity to one another.

The idea for the Eau Claire event dates back a couple of months, when First Presbyterian Church Rev. Kathy Reid Walker saw plans for a similar musical event in a different location. Reid Walker pitched the idea to locals, who seemed responsive, so she is promoting it now on behalf of the church.

“Silent Night” would normally be sung during a candlelight worship service at First Presbyterian on Christmas Eve, so this event should resemble what people would usually do on that date. Instead of gathering together at a church, the lyrics will hopefully be sung by individuals outside their respective homes.

“The idea was to fill a void,” Reid Walker said. “People need something right now to be able to come together and feel like we’re doing something … We can still sing together.”

Reid Walker doesn’t know what to expect when the time comes on Christmas Eve, but she would “be so thrilled to come outside at 10 o’clock and hear all these voices.”

In Augusta, a different festive sound will occur for two minutes earlier in the evening. The bell-ringing event is jointly organized by members of the Augusta High School National Honor Society and the Augusta Senior & Community Center.

The aim is to create a safe sense of community and “make people feel like they are unified and taking part in something bigger, even if you can’t necessarily hear the bells,” said Kyle Shult, Honor Society historian and a junior at Augusta High School.

Barb Pritzl, director or the Augusta Senior & Community Center, saw a similar idea online and adjusted it to fit Augusta.

The Senior Center paid for the bells and also took gift bags with bells to local businesses and a few other community members.

Honor Society students spent a few weeks decorating the bells, which are gold or silver with red or green string. The bells were distributed to all Augusta students ages 4 through 18 and given to the senior center for community members to pick up. Bells were also distributed to everyone in Augusta who receives food from the county Meals on Wheels program.

Emily Mayer, Honor Society president and a senior at Augusta High School, mentioned the event to people in other communities, so she hopes they do it as well.

“It would be amazing if everyone would grab some form of a bell across the whole area, and even in other cities and states, to be able to bring us all together in unity,” Larson said.

Larson, Mayer and Shult live in the country, so it may seem odd to ring bells on their front porch, but they said knowing other people are doing the same thing at the same time is special.

“If I’m sitting out two miles away from the school and I’m ringing my bell, it still feels like it’s a sense of unity and community because I know that the people in town are doing it,” Mayer said.

This year marks the first time for the events, which were borne of necessity. It might be tough to gauge their success since they will involve people spread across miles, but ideally the events can momentarily decrease the loneliness experienced by so many people in 2020. Indeed, Pritzl said the Augusta event will be worthwhile “if this helps even one person to feel less isolated.”

The community singing might only occur this year, but Reid Walker said continuing it in the future is possible if people are receptive. The Augusta bell-ringing may also be a one-time thing, but organizers said it could serve as the start of an annual communal event.

During a particularly turbulent, devastating year, the events offer a brief refuge and chance for connection.

A woman pulls groceries from a cart to her vehicle outside a Walmart store March 31 in Pearl, Miss. Walmart is teaming with the General Motors Cruise autonomous vehicle unit to test automated package delivery in Arizona.

WASHINGTON — The Justice Department is suing Walmart, alleging the company unlawfully dispensed controlled substances through its pharmacies, helping to fuel the opioid crisis in America.

The civil complaint being filed Tuesday points to the role Walmart’s pharmacies may have played in the crisis by filling opioid prescriptions and by unlawfully distributing controlled substances to the pharmacies during the height of the opioid crisis. Walmart operates more than 5,000 pharmacies in its stores around the country.

Federal law required Walmart to spot suspicious orders for controlled substances and report those to the Drug Enforcement Administration, but prosecutors charge the company didn’t do that. Walmart couldn’t immediately be reached for comment.

“Walmart knew that its distribution centers were using an inadequate system for detecting and reporting suspicious orders,” said Jason Dunn, the U.S. attorney in Colorado. “As a result of this inadequate system, for years Walmart reported virtually no suspicious orders at all. In other words, Walmart’s pharmacies ordered opioids in a way that went essentially unmonitored and unregulated.”

Clark said Walmart “violated important provisions of the Controlled Substances Act that were meant to prevent such controlled substances, including prescription opioids, from being diverted for misuse and abuse.”

AP reported the news of the lawsuit ahead of the Justice Department’s public announcement, citing a person who could not discuss the matter publicly before the announced move. The person spoke to the AP on condition of anonymity.

In its lawsuit, Walmart said the Justice Department’s investigation — launched in 2016 — had identified hundreds of doctors who wrote problematic prescriptions that Walmart’s pharmacists should not have filled. But the lawsuit charged that nearly 70% of the doctors still have active registrations with the DEA.

Walmart’s lawsuit alleged the government was blaming it for the lack of regulatory and enforcement policies to stem the crisis. The company is asking a federal judge to declare the government has no basis to seek civil damages; the suit remains ongoing.

EAU CLAIRE — Documents show Eau Claire County has been billed nearly $4,000 by the firm that employs the county’s outside counsel during the ongoing Sheriff’s Office investigation into the county’s Department of Human Services.

Two invoices provided to the Leader-Telegram through a Freedom of Information Act request show Eau Claire County was billed $3,900 by Weld Riley for work done from Sept. 22 to Oct. 28. The county retained White beginning Sept. 22.

She also said the county is retaining White on a project-by-project basis and paying “the going rate” for his services.

In this case, the rate is $200 per hour for 19.5 hours over 17 separate days. That included legal research and reviews of records requests, plus emails, phone calls and meetings with county officials like Schauf, Sheriff Ron Cramer, District Attorney Gary King, DHS Director Diane Cable and County Board Chair Nick Smiar.

The invoices show varying amounts of time White spent working for the county during those 17 days. The shortest length was 18 minutes of work in one day, while the longest was 3½ hours involving a series of meetings and phone conferences on Sept. 24 with Eau Claire County corporation counsel Tim Sullivan, Schauf, Smiar, Cramer and King.

Indeed, White told the County Board during its Dec. 15 meeting that he advised Cramer on Sept. 24 “that forced interviews of any employees at Human Services would be a bad idea” because if employees did potentially commit criminal activity, their statements to the Sheriff’s Office would likely be legally inadmissible.

During that County Board meeting, White characterized the Sheriff’s Office’s ongoing investigation into DHS, which began in May, as highly unusual and an example of government dysfunction.

White’s comments came a day after Cramer said his office has been “stonewalled” and not received any DHS financial information since it initiated an investigation into DHS financial practices in May. Cramer also said the Sheriff’s Office hired the accounting firm Wipfli in October to conduct a forensic audit of DHS, which specifically searches for illegal activity.

During the Dec. 15 meeting, White said documents haven’t been provided because the Sheriff’s Office repeatedly asked for massive amounts of records from DHS.

“We had to decline to provide some information because the request was just overwhelming in scope,” White said. “This request for information, without legal basis, just simply could not be honored.”

Cramer also said on Dec. 14 that he notified Schauf, King and White that the Sheriff’s Office has “what we believe to be probable cause of criminal activity” as part of the investigation. The following day, White said if the Sheriff’s Office believes something criminal has occurred, those potential crimes should be pursued through the judicial system rather than records requests.

That could mean Cramer’s office will need search warrants and/or subpoenas, which are issued by a judge only if it is determined that probable cause exists.