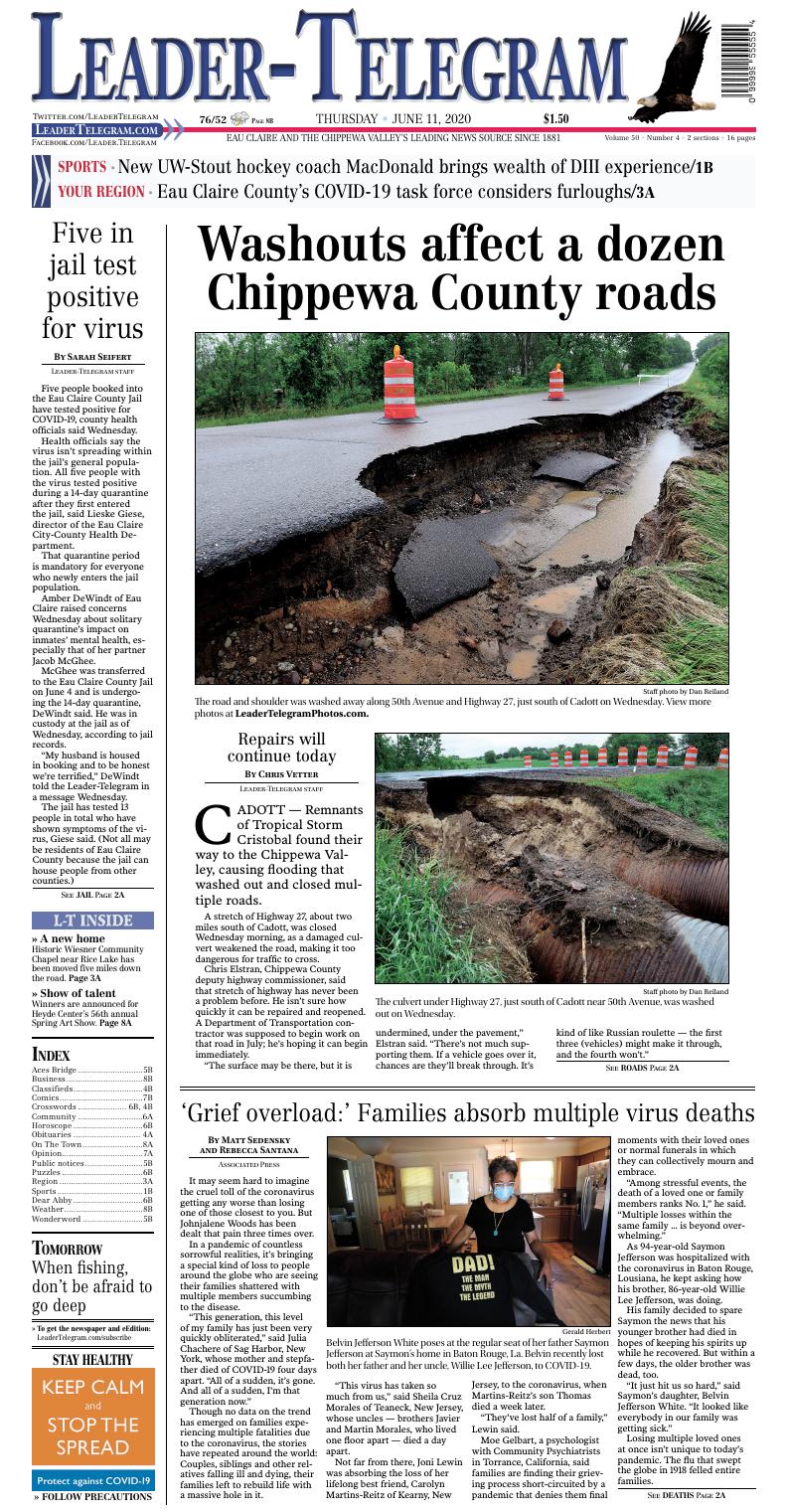 The road and shoulder was washed away along 50th Avenue and Highway 27, just south of Cadott on Wednesday. View more photos at LeaderTelegramPhotos.com.

The culvert under Highway 27, just south of Cadott near 50th Avenue, was washed out on Wednesday.

CADOTT — Remnants of Tropical Storm Cristobal found their way to the Chippewa Valley, causing flooding that washed out and closed multiple roads.

A stretch of Highway 27, about two miles south of Cadott, was closed Wednesday morning, as a damaged culvert weakened the road, making it too dangerous for traffic to cross.

Chris Elstran, Chippewa County deputy highway commissioner, said that stretch of highway has never been a problem before. He isn’t sure how quickly it can be repaired and reopened. A Department of Transportation contractor was supposed to begin work on that road in July; he’s hoping it can begin immediately.

“The surface may be there, but it is undermined, under the pavement,” Elstran said. “There’s not much supporting them. If a vehicle goes over it, chances are they’ll break through. It’s kind of like Russian roulette — the first three (vehicles) might make it through, and the fourth won’t.”

The heavy rains — more than 2 inches in many areas — Tuesday night damaged about a dozen roads across Chippewa County. As of mid-day Tuesday, seven locations were still closed.

“We’re chasing storm damage,” he said. “We’re always prepared for them; you just don’t know where it will be. We’re finding more as the day progresses.”

In many cases, it was shoulders of roads being washed out. Most of those were repaired Wednesday, or will be worked on today, he said.

“The water isn’t over the road anymore today, but the pipes are deteriorated,” he said.

It has been challenging finding all the damage sites, Elstran said.

“It’s finding them all, and determining how bad they are,” Elstran said of the challenges. “You have to wait for the water to go down to see.”

The highway department put up roadblock signs stretching the entire width of Highway 27.

“If you just put up one or two, they won’t be respected, and they’ll drive around them,” Elstran said.

Elstran was cautious about issuing a damage estimate at this time.

“It will be several thousand dollars,” Elstran said. “We’re doing all of our documentation, so if we’re declared a disaster area, we can recoup some of those costs.”

The National Weather Service is reporting 1.86 inches of rain fell at the Chippewa Valley Regional Airport. However, near Augusta, about 3.3 inches fell, and Holcombe had 2.93 inches, the weather agency reports.

According to Eau Claire County Emergency Management, two sections of road remained closed as of 4 p.m. Wednesday. Highway I is closed between Traaseth Road and Myren Road and will be closed for an extended period of time due to damage, and part of Highway XX north of Highway X in Ludington is closed due to a culvert washout.

It may seem hard to imagine the cruel toll of the coronavirus getting any worse than losing one of those closest to you. But Johnjalene Woods has been dealt that pain three times over.

In a pandemic of countless sorrowful realities, it’s bringing a special kind of loss to people around the globe who are seeing their families shattered with multiple members succumbing to the disease.

“This generation, this level of my family has just been very quickly obliterated,” said Julia Chachere of Sag Harbor, New York, whose mother and stepfather died of COVID-19 four days apart. “All of a sudden, it’s gone. And all of a sudden, I’m that generation now.”

Though no data on the trend has emerged on families experiencing multiple fatalities due to the coronavirus, the stories have repeated around the world: Couples, siblings and other relatives falling ill and dying, their families left to rebuild life with a massive hole in it.

“This virus has taken so much from us,” said Sheila Cruz Morales of Teaneck, New Jersey, whose uncles — brothers Javier and Martin Morales, who lived one floor apart — died a day apart.

Not far from there, Joni Lewin was absorbing the loss of her lifelong best friend, Carolyn Martins-Reitz of Kearny, New Jersey, to the coronavirus, when Martins-Reitz’s son Thomas died a week later.

“They’ve lost half of a family,” Lewin said.

Moe Gelbart, a psychologist with Community Psychiatrists in Torrance, California, said families are finding their grieving process short-circuited by a pandemic that denies them final moments with their loved ones or normal funerals in which they can collectively mourn and embrace.

“Among stressful events, the death of a loved one or family members ranks No. 1,” he said. “Multiple losses within the same family ... is beyond overwhelming.”

As 94-year-old Saymon Jefferson was hospitalized with the coronavirus in Baton Rouge, Lousiana, he kept asking how his brother, 86-year-old Willie Lee Jefferson, was doing.

His family decided to spare Saymon the news that his younger brother had died in hopes of keeping his spirits up while he recovered. But within a few days, the older brother was dead, too.

“It just hit us so hard,” said Saymon’s daughter, Belvin Jefferson White. “It looked like everybody in our family was getting sick.”

Losing multiple loved ones at once isn’t unique to today’s pandemic. The flu that swept the globe in 1918 felled entire families.

Accidents, natural disasters and terrorist attacks have claimed relatives, such as on 9/11, when one family saw two sons die, one a policeman, the other a firefighter.

The spectacle of five brothers aboard the USS Juneau dying in World War II was so horrifying that the U.S. military changed its policies to try and keep another family from being similarly decimated.

“People can go into grief overload,” said Dr. Varun Choudhary, a psychiatrist who oversees behavioral health for Magellan Health, an HMO. “The grief builds and accumulates.”

Woods knows that all too well.

The hairdresser from Gadsden, Alabama, had a happy existence living with her sister, brother-in-law and parents. Her cousin Michael Woods came around so often, he was almost like a brother.

Her father Billy was the first to fall ill, so sick he couldn’t even put his own socks on. Then her older sister Phacethia Posey caught it. And, finally, her cousin Michael.

And, in one horrible week, all three died.

If there’s any bright side, it’s that more didn’t perish. Woods and her mother also were infected and hospitalized and she still finds herself getting winded by the way the virus affected her lungs.

All three funerals were held the same day. Few could attend because of restrictions.

“There’s no answers why all of them had to leave,” Woods said. “I can ask the question all day.”

Health officials say the virus isn’t spreading within the jail’s general population. All five people with the virus tested positive during a 14-day quarantine after they first entered the jail, said Lieske Giese, director of the Eau Claire City-County Health Department.

That quarantine period is mandatory for everyone who newly enters the jail population.

McGhee was transferred to the Eau Claire County Jail on June 4 and is undergoing the 14-day quarantine, DeWindt said. He was in custody at the jail as of Wednesday, according to jail records.

“My husband is housed in booking and to be honest we’re terrified,” DeWindt told the Leader-Telegram in a message Wednesday.

The jail has tested 13 people in total who have shown symptoms of the virus, Giese said. (Not all may be residents of Eau Claire County because the jail can house people from other counties.)

“Just to be clear, these were not jail-acquired cases,” Giese said Wednesday. “We consider all these jail cases to be community-acquired COVID-19 that just happened to be tested for in the jail.”

As of today, there doesn’t appear to be spread of the virus within the jail itself, Giese added.

Concerns about the quarantine

DeWindt compared the quarantine period to “being stuck in basically solitary confinement with no mail, nothing to distract oneself.”

She’s able to call McGhee at the jail during his quarantine, but claimed he’s been denied personal hygiene products.

Jail officials say the 14-day quarantine is vital to catch people who enter the jail carrying COVID-19, before they unknowingly spread the virus to the jail’s general population.

Every person who is booked into the jail — and remains there — goes into a 14-day quarantine, said Lt. Dave Riewestahl of the Eau Claire County Sheriff’s Office’s security services division, who said the jail is following CDC guidelines during the pandemic.

During that two-week-long period, people in custody are housed in a single solid-walled cell with a solid door, to prevent possible transmission of COVID-19 via droplets in an open-air cell, Riewestahl said.

In the quarantine period, inmates are kept in those cells roughly 24 hours a day unless they’re let out for showers, court appearances or to meet with their attorneys, Riewestahl said.

If someone in custody is having symptoms of the virus — common signs include a fever, cough and shortness of breath — jail medical staff can conduct COVID-19 tests.

If someone at the jail tests positive, the Health Department handles followup and contact tracing, Giese said.

People in custody who are in quarantine don’t use the same showers as the jail’s general population, Riewestahl said.

The jail has always offered people in custody cleaning supplies — cleaning rags, disinfectant spray and soap. But during the pandemic, the jail has extended the timeframe during which inmates can access cleaning supplies: anytime when their doors are open and they are allowed in common areas of the jail, Riewestahl said.

The jail has been giving those in custody additional hand soap to accommodate more handwashing for some time, he added.

The sheriff’s office has continued to reduce the number of people inside the jail.

It reduced the number of inmates from 281 to 143 between March 1 and April 8, Bresina said in April. About 30 inmates with Huber work release privileges who were in good standing were also released to stay at home instead of the jail.

As of Sunday, 138 were in custody at the jail, Riewestahl said.

Riewestahl said the jail has “a good plan and a good strategy” for protecting against spread of COVID-19.

“(The virus) is always a worry for us, but I believe the CDC has some great guidelines for us that we’re following, and we’re collaborating with the health department and their guidance here locally,” he said. 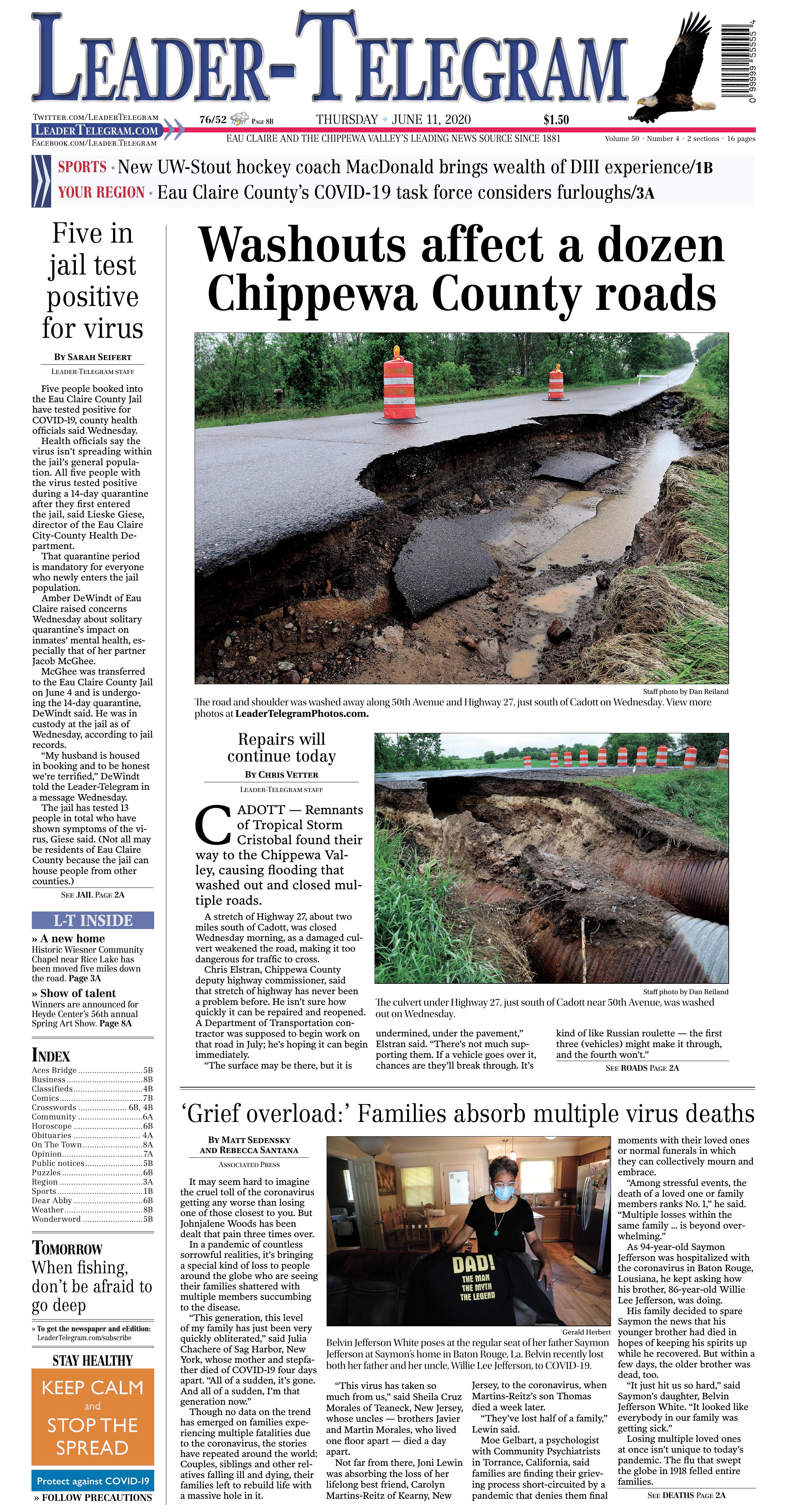