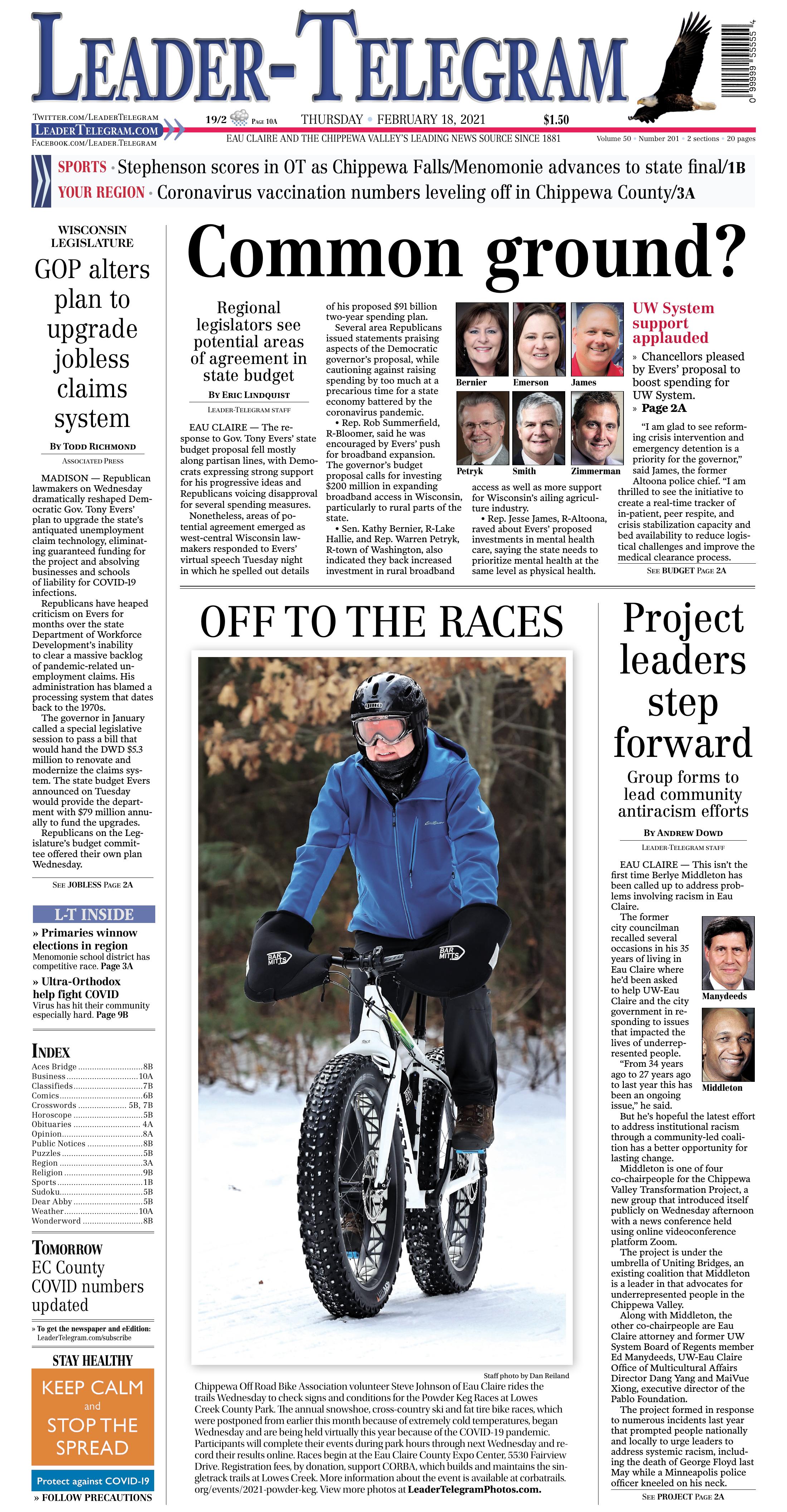 Nonetheless, areas of potential agreement emerged as west-central Wisconsin lawmakers responded to Evers’ virtual speech Tuesday night in which he spelled out details of his proposed $91 billion two-year spending plan.

Several area Republicans issued statements praising aspects of the Democratic governor’s proposal, while cautioning against raising spending by too much at a precarious time for a state economy battered by the coronavirus pandemic.

• Rep. Rob Summerfield, R-Bloomer, said he was encouraged by Evers’ push for broadband expansion. The governor’s budget proposal calls for investing $200 million in expanding broadband access in Wisconsin, particularly to rural parts of the state.

“I am glad to see reforming crisis intervention and emergency detention is a priority for the governor,” said James, the former Altoona police chief. “I am thrilled to see the initiative to create a real-time tracker of in-patient, peer respite, and crisis stabilization capacity and bed availability to reduce logistical challenges and improve the medical clearance process.

“This will help our law enforcement officers who transport citizens to health care facilities and help those who are in need of care.”

Bernier, a member of the Legislature’s budget-writing Joint Finance Committee, called the mental health proposals both encouraging and a missed opportunity. While she said the issue is rightfully receiving more attention and she is intrigued by several of Evers’ proposals, Bernier maintained Evers’ “misguided” veto in the last budget of one-time funding for more mental health beds in the Chippewa Valley needlessly delayed an important piece of the solution.

• Rep. Shannon Zimmerman, a River Falls Republican who also sits on the Joint Finance Committee, said he supports the governor’s call for increased spending on K-12 education and special education.

“I think we’ll be in the same area code on K-12 funding, and I agree with him about the importance of funding special education,” Zimmerman said in an interview. “The governor put over a $700 million price tag on it, and that may be a little rich, but that doesn’t mean the need isn’t valid.”

“The governor’s budget is a tangible plan for Wisconsin to move forward through this pandemic and become stronger than ever,” said Sen. Jeff Smith, D-town of Brunswick, noting that the plan would provide immediate relief and long-term support. “COVID-19 hit Wisconsin hard. Gov. Evers’ budget puts Wisconsin back on track.”

Smith pointed to support for broadband expansion, agricultural investment and small businesses as particularly important aspects of the plan, but cautioned that the state risks losing all of Evers’ “overwhelmingly popular budget provisions” if it doesn’t pass nonpartisan redistricting reform.

“The people need the governor’s budget,” Smith said. “We need a Legislature that is accountable and willing to pass it.”

“I also support Gov. Evers’ blueprint to help relieve some of the financial stresses on our communities, by expanding affordable health care access, reducing prescription prices and creating new streams of revenue for Wisconsin, like marijuana taxes,” Emerson said.

Republicans, who control both houses of the Legislature, are expected to spend the next few months rewriting the budget. Evers retains the power to veto the budget or tweak it using partial vetoes.

Perhaps the harshest immediate criticism from regional Republicans was reserved for Evers’ proposed tax increase of about $1 billion to help fund spending for the “Badger Bounceback” agenda the governor said is needed to bolster Wisconsin’s economy as it recovers from the COVID-19 pandemic.

Bernier said she is “deeply concerned about the huge increases in spending and the taxes that go with it.”

Likewise, Zimmerman and Summerfield expressed concern about spending levels that would drain the state’s rainy day fund that now stands at nearly $1 billion.

“I think the worst thing we could do right now is raise taxes,” Zimmerman said, calling the concept “insulting” to the many Wisconsinites who have drained their savings and lost jobs and homes during the pandemic. “The timing is inappropriate.”

Zimmerman said he expects the Joint Finance Committee to hold virtual and in-person public hearings across the state in the coming months to allow residents to weigh in with their budget priorities. 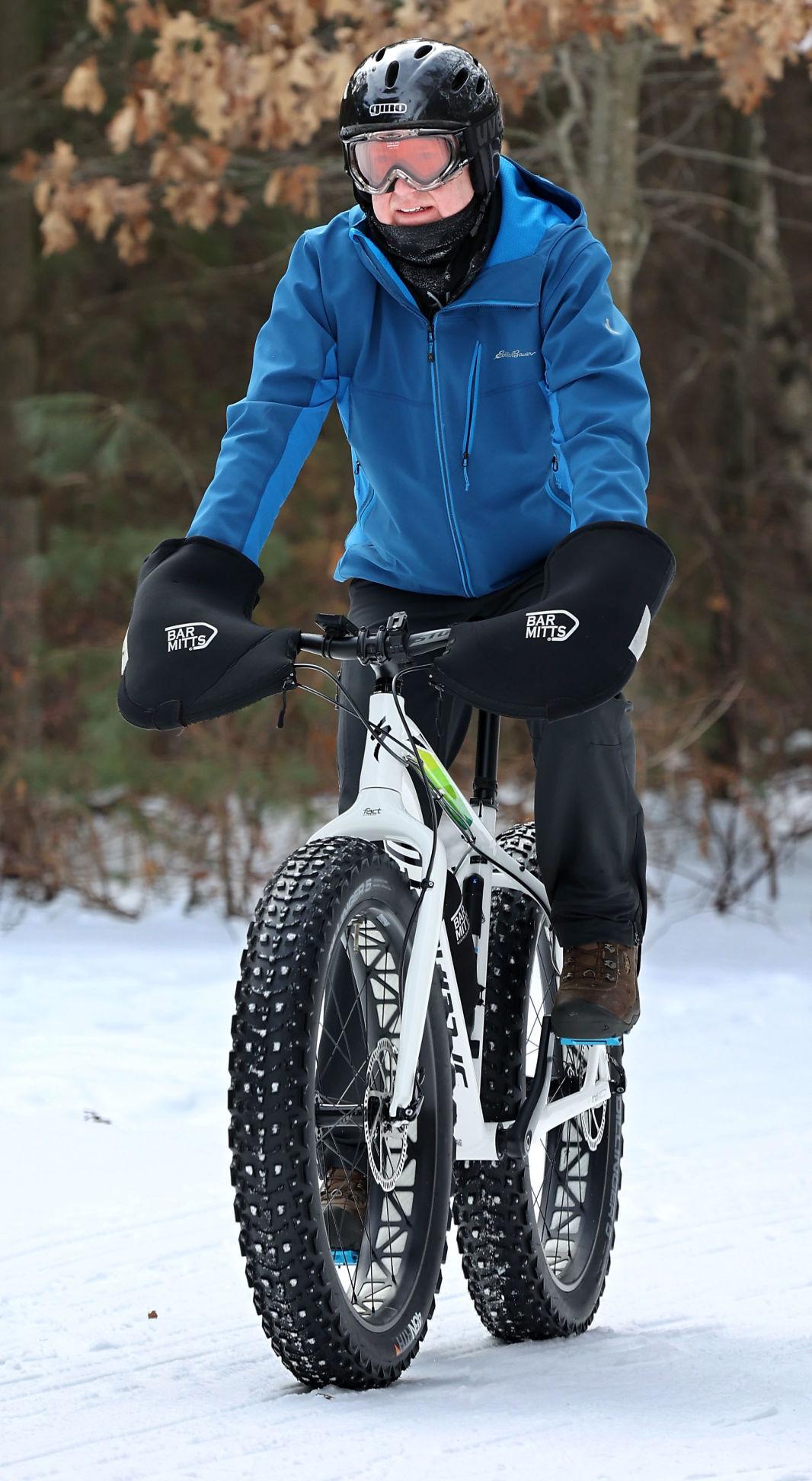 Chippewa Off Road Bike Association volunteer Steve Johnson of Eau Claire rides the trails Wednesday to check signs and conditions for the Powder Keg Races at Lowes Creek County Park. The annual snowshoe, cross-country ski and fat tire bike races, which were postponed from earlier this month because of extremely cold temperatures, began Wednesday and are being held virtually this year because of the COVID-19 pandemic. Participants will complete their events during park hours through next Wednesday and record their results online. Races begin at the Eau Claire County Expo Center, 5530 Fairview Drive. Registration fees, by donation, support CORBA, which builds and maintains the singletrack trails at Lowes Creek. More information about the event is available at corbatrails.org/events/2021-powder-keg. View more photos at LeaderTelegramPhotos.com.

Republicans have heaped criticism on Evers for months over the state Department of Workforce Development’s inability to clear a massive backlog of pandemic-related unemployment claims. His administration has blamed a processing system that dates back to the 1970s.

The governor in January called a special legislative session to pass a bill that would hand the DWD $5.3 million to renovate and modernize the claims system. The state budget Evers announced on Tuesday would provide the department with $79 million annually to fund the upgrades.

Republicans on the Legislature’s budget committee offered their own plan Wednesday.

They eliminated the guaranteed $5.3 million for upgrades and balked at the $79 million request in the budget. Under their plan, the department would have to use federal money and ask the committee for state dollars as needed.

The Republicans included the exemptions in a sweeping COVID-19 relief bill they sent to Evers earlier this month. Evers vetoed the package largely because it would have prohibited employers from requiring vaccinations and limited health officials’ ability to restrict gatherings.

The Republicans also inserted wording that would extend a waiver of a one-week waiting period for unemployment benefits through mid-March. A COVID-19 relief bill the Legislature passed in April waived the waiting period through Feb. 6.

Evers has made extending the waiver a priority; states that waive the waiting period can use federal money to pay the first week of claims. The DWD announced Wednesday that it had started working on emergency regulations that would extend the waiver for 150 days, but committee Republicans said extending it through regulatory changes would be illegal.

“We are here today because the governor has failed to provide leadership when the state needed him the most,” Born said. “Here’s that compromise to get that process moving.”

Democrats chastised Born for grandstanding — “Doing the blame game is not serving any purpose,” Sen. LaTonya Johnson said. But they joined Republicans in passing the changes 15-0, clearing the way for full floor votes in the Assembly and Senate.

The DWD has been grappling with a massive backlog of pandemic-related unemployment claims over the past year. It has received 9.2 million claims since the coronavirus pandemic started forcing layoffs and business closures in March. That’s about 1.6 million more claims than it received between 2016 and 2019.

EAU CLAIRE — This isn’t the first time Berlye Middleton has been called up to address problems involving racism in Eau Claire.

The former city councilman recalled several occasions in his 35 years of living in Eau Claire where he’d been asked to help UW-Eau Claire and the city government in responding to issues that impacted the lives of underrepresented people.

But he’s hopeful the latest effort to address institutional racism through a community-led coalition has a better opportunity for lasting change.

Middleton is one of four co-chairpeople for the Chippewa Valley Transformation Project, a new group that introduced itself publicly on Wednesday afternoon with a news conference held using online videoconference platform Zoom.

The project is under the umbrella of Uniting Bridges, an existing coalition that Middleton is a leader in that advocates for underrepresented people in the Chippewa Valley.

Along with Middleton, the other co-chairpeople are Eau Claire attorney and UW System Board of Regents member Ed Manydeeds, UW-Eau Claire Office of Multicultural Affairs Director Dang Yang and MaiVue Xiong, executive director of the Pablo Foundation.

The project formed in response to numerous incidents last year that prompted people nationally and locally to urge leaders to address systemic racism, including the death of George Floyd last May while a Minneapolis police officer kneeled on his neck.

“The narrative and interest in having these conversations have gotten to the forefront of people’s minds,” Yang said.

The four co-chairpeople began meeting in fall over Zoom and have since been working on goals, ways to measure progress and organizing an advisory board and coordinating committee.

Along with the four leaders, the project also includes UW-Eau Claire and local government officials, business community leaders and people from organizations that work with underrepresented groups.

The Transformation Project plans to roll out a website by mid-March with more information on its work and ways the general public can get involved in it.

On Wednesday the co-chairpeople spoke about their desire for the Transformation Project to have an impact on everyday life.

“Every aspect of our lives is what we’re looking at in terms of this project and how we’re trying to make life better for everyone in this community,” Manydeeds said.

He mentioned situations where people can face discrimination when applying for loans, renting or buying a home, or getting watched in stores due to their skin color, ethnic background or other minority status.

“Those things that happen because of the way people look or how they sound shouldn’t be happening,” Manydeeds said.

The Transformation Project won’t just focus on individual sectors — such as education, finance, health care, government and others — but instead take a broader look to address institutional racism people experience in their lives, Yang said.

He noted there are already some efforts to boost equity, diversity and inclusion going on the community in policing and the city government. Yang said the Transformation Project can build on those existing efforts by providing a coalition and structure to create opportunities for more of that work.

“The purpose of the Transformation Project is to complement those efforts currently going on,” Xiong added.

As a member of the Standing Rock Sioux Tribe in his 70s, Manydeeds has noticed improvements in society for nonwhite people since the 1950s and decades that followed, but not enough.

And locally Manydeeds described seeing a cycle that happens when an incidence of racism comes to the public’s attention. After the initial reaction, there are promises to prevent similar problems from happening again, he said, but the fervor to carry through with those often dies down until the next incident arises.

“Things changed and then they stop,” he said.

Manydeeds wants the Transformation Project to stop that cycle by ensuring those pledges for change are indeed carried out.

“We can’t say good things and then forget about it,” he said.