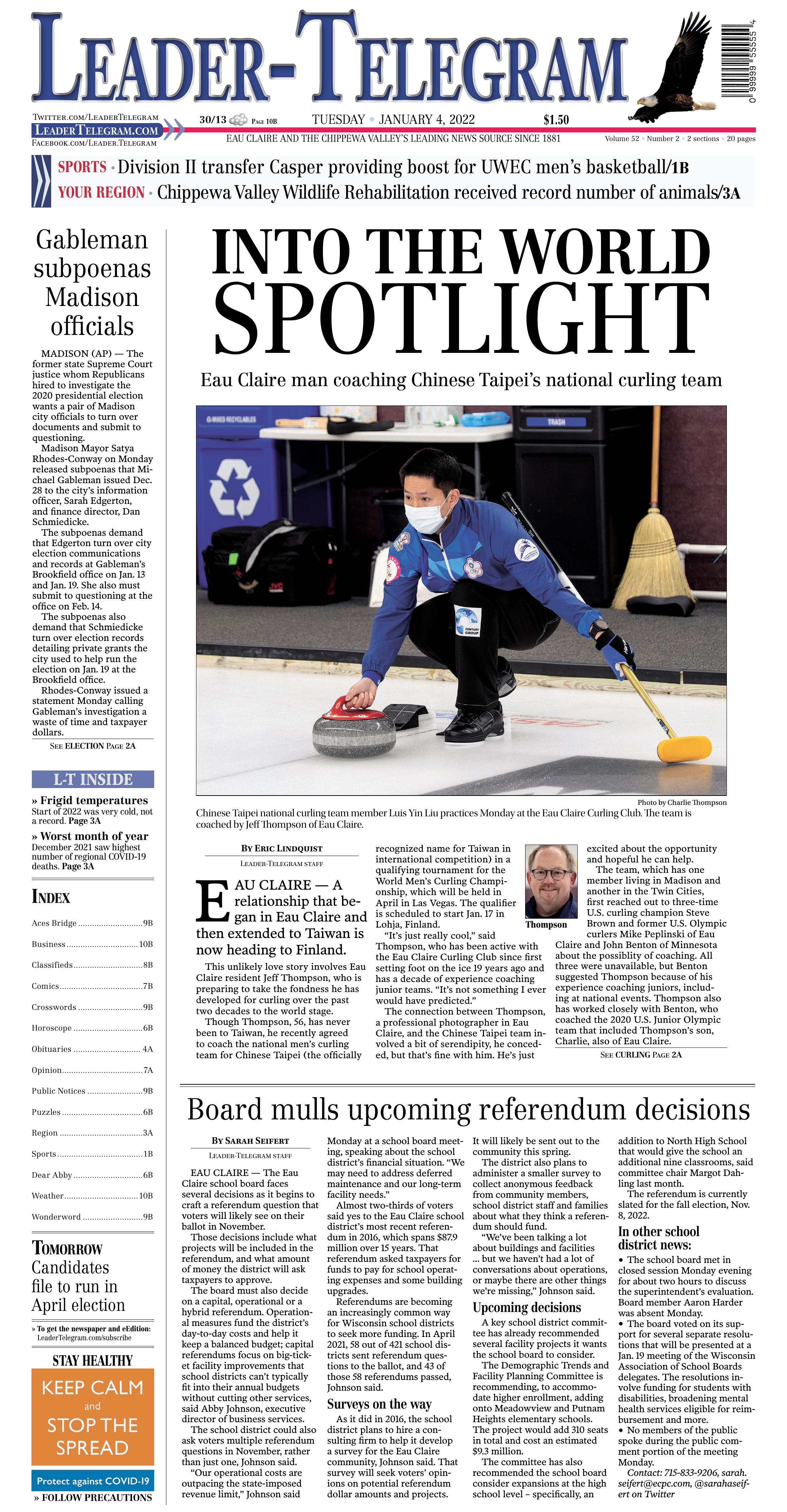 Jeff Thompson of Eau Claire has agreed to coach the Chinese Taipei National Curling Team in a qualifying event later this month in Finland for the World Men's Curling Championship.

EAU CLAIRE — A relationship that began in Eau Claire and then extended to Taiwan is now heading to Finland.

This unlikely love story involves Eau Claire resident Jeff Thompson, who is preparing to take the fondness he has developed for curling over the past two decades to the world stage.

Though Thompson, 56, has never been to Taiwan, he recently agreed to coach the national men’s curling team for Chinese Taipei (the officially recognized name for Taiwan in international competition) in a qualifying tournament for the World Men’s Curling Championship, which will be held in April in Las Vegas. The qualifier is scheduled to start Jan. 17 in Lohja, Finland.

“It’s just really cool,” said Thompson, who has been active with the Eau Claire Curling Club since first setting foot on the ice 19 years ago and has a decade of experience coaching junior teams. “It’s not something I ever would have predicted.”

The connection between Thompson, a professional photographer in Eau Claire, and the Chinese Taipei team involved a bit of serendipity, he conceded, but that’s fine with him. He’s just excited about the opportunity and hopeful he can help.

The team, which has one member living in Madison and another in the Twin Cities, first reached out to three-time U.S. curling champion Steve Brown and former U.S. Olympic curlers Mike Peplinski of Eau Claire and John Benton of Minnesota about the possiblity of coaching. All three were unavailable, but Benton suggested Thompson because of his experience coaching juniors, including at national events. Thompson also has worked closely with Benton, who coached the 2020 U.S. Junior Olympic team that included Thompson’s son, Charlie, also of Eau Claire.

In the meantime, the Chinese Taipei squad competed without a coach in winning a play-down match against the other top team from Taiwan, in a Winter Olympic Games qualifier and then in November while earning a bronze medal in Kazakhstan in the Pacific-Asia Curling Championships, which earned the team a berth in the Finland competition. The members were able to practice together for a couple of months this fall in Minnesota.

While Thompson was unavailable for the Pacific-Asia event, he agreed to coach the team in the world championship qualifier. He is scheduled to fly to Finland next week.

So far, the coaching arrangement that started in late November has involved Zoom meetings and a few individual training sessions with the players living in the U.S. The other members of the Chinese Taipei team live in Canada and Taiwan.

“My job is to polish the edges,” Thompson said of the team ranked No. 22 in the world.

National team member Luis Yin Liu, 39, who lives in Chaska, Minnesota, and was in Eau Claire on Monday for a solo training session with Thompson, said he is impressed with his new coach’s approach and optimistic the team will benefit for his leadership.

“So far it’s a really good fit,” Yin Liu said. “Not only is Jeff a good listener, but he has enough experience that he is able to break things down to very simple steps and tell you how to fix it if something is going wrong.”

While coaches can’t communicate with players during games, they can address potential problem areas during practices and help out during the team’s allotted nine minutes of warmup time before matches.

“Every second counts,” Yin Liu said. “Having one more person clearing the rocks and holding the broom for you as a target makes for a huge advantage.”

The team has ice time booked in Helsinki, where members hope some last-minute training will hone their skills before the competition, which will include traditional international powers Japan, Finland, Russia and the Netherlands. The top two teams will join the Olympic participants for the world championships.

While Thompson said qualifying for worlds would be “an amazing experience for these guys,” he acknowledged it presents a steep challenge for a 2-year-old team that had its first season and a half canceled by the COVID-19 pandemic.

“It’s going to be an uphill battle,” Thompson said. “One of the biggest reasons is our inability to practice as an entire team for the past couple of months.”

Thompson is quick to credit the team members for getting as far as they have without him but said he still hopes to offer some tips on form that could lead to more consistency and take some of the load off veteran skip Ting-Li Lin, who is leading a squad that includes two students in college and one in high school.

“They have brought me on to help, but they’ve done all the work,” Thompson said. “It’s an honor for me to be asked to be a part of it ... Hopefully, I ride their coattails to glory.”

EAU CLAIRE — The Eau Claire school board faces several decisions as it begins to craft a referendum question that voters will likely see on their ballot in November.

Those decisions include what projects will be included in the referendum, and what amount of money the district will ask taxpayers to approve.

The board must also decide on a capital, operational or a hybrid referendum. Operational measures fund the district’s day-to-day costs and help it keep a balanced budget; capital referendums focus on big-ticket facility improvements that school districts can’t typically fit into their annual budgets without cutting other services, said Abby Johnson, executive director of business services.

The school district could also ask voters multiple referendum questions in November, rather than just one, Johnson said.

“Our operational costs are outpacing the state-imposed revenue limit,” Johnson said Monday at a school board meeting, speaking about the school district’s financial situation. “We may need to address deferred maintenance and our long-term facility needs.”

Almost two-thirds of voters said yes to the Eau Claire school district’s most recent referendum in 2016, which spans $87.9 million over 15 years. That referendum asked taxpayers for funds to pay for school operating expenses and some building upgrades.

Surveys on the way

As it did in 2016, the school district plans to hire a consulting firm to help it develop a survey for the Eau Claire community, Johnson said. That survey will seek voters’ opinions on potential referendum dollar amounts and projects. It will likely be sent out to the community this spring.

The district also plans to administer a smaller survey to collect anonymous feedback from community members, school district staff and families about what they think a referendum should fund.

“We’ve been talking a lot about buildings and facilities … but we haven’t had a lot of conversations about operations, or maybe there are other things we’re missing,” Johnson said.

A key school district committee has already recommended several facility projects it wants the school board to consider.

The Demographic Trends and Facility Planning Committee is recommending, to accommodate higher enrollment, adding onto Meadowview and Putnam Heights elementary schools. The project would add 310 seats in total and cost an estimated $9.3 million.

The committee has also recommended the school board consider expansions at the high school level – specifically, an addition to North High School that would give the school an additional nine classrooms, said committee chair Margot Dahling last month.

The referendum is currently slated for the fall election, Nov. 8, 2022.

In other school district news:

MADISON (AP) — The former state Supreme Court justice whom Republicans hired to investigate the 2020 presidential election wants a pair of Madison city officials to turn over documents and submit to questioning.

The subpoenas demand that Edgerton turn over city election communications and records at Gableman’s Brookfield office on Jan. 13 and Jan. 19. She also must submit to questioning at the office on Feb. 14.

The subpoenas also demand that Schmiedicke turn over election records detailing private grants the city used to help run the election on Jan. 19 at the Brookfield office.

The mayor did not say whether Edgerton and Schmedicke would comply with the subpoenas, however. Deputy Mayor Katie Crawley, who handles media inquires for Rhodes-Conway’s administration, didn’t immediately return messages Monday afternoon.

Part of Gableman’s investigation is focused on whether Madison and other Democratic-leaning cities in Wisconsin improperly accepted nearly $9 million from the Facebook-funded Center for Tech and Civil Life to help administer the election. The former justice has subpoenaed the mayors of the state’s five largest cities as well as Wisconsin Elections Commission Administrator Meagan Wolfe to submit to questioning in Brookfield.

So far no one has complied with the demand. Gableman has filed a lawsuit in Waukesha County seeking to force Rhodes-Conway and Green Bay Mayor Eric Genrich to appear or put them in jail. That case is still pending.

The state Department of Justice, led by Democratic Attorney General Josh Kaul, has filed a lawsuit seeking to quash the Wolfe subpoena.

An Associated Press review of presidential results in six key battleground states, including Wisconsin, found fewer than 475 cases of potential fraud, a number that would have made no difference in the election’s outcome.

Election officials have referred 31 cases of potential fraud to Wisconsin prosecutors in 12 of the state’s 72 counties, representing about 0.15% of Biden’s margin of victory in the state, the AP review found. State auditors also found no evidence of widespread fraud in the election.