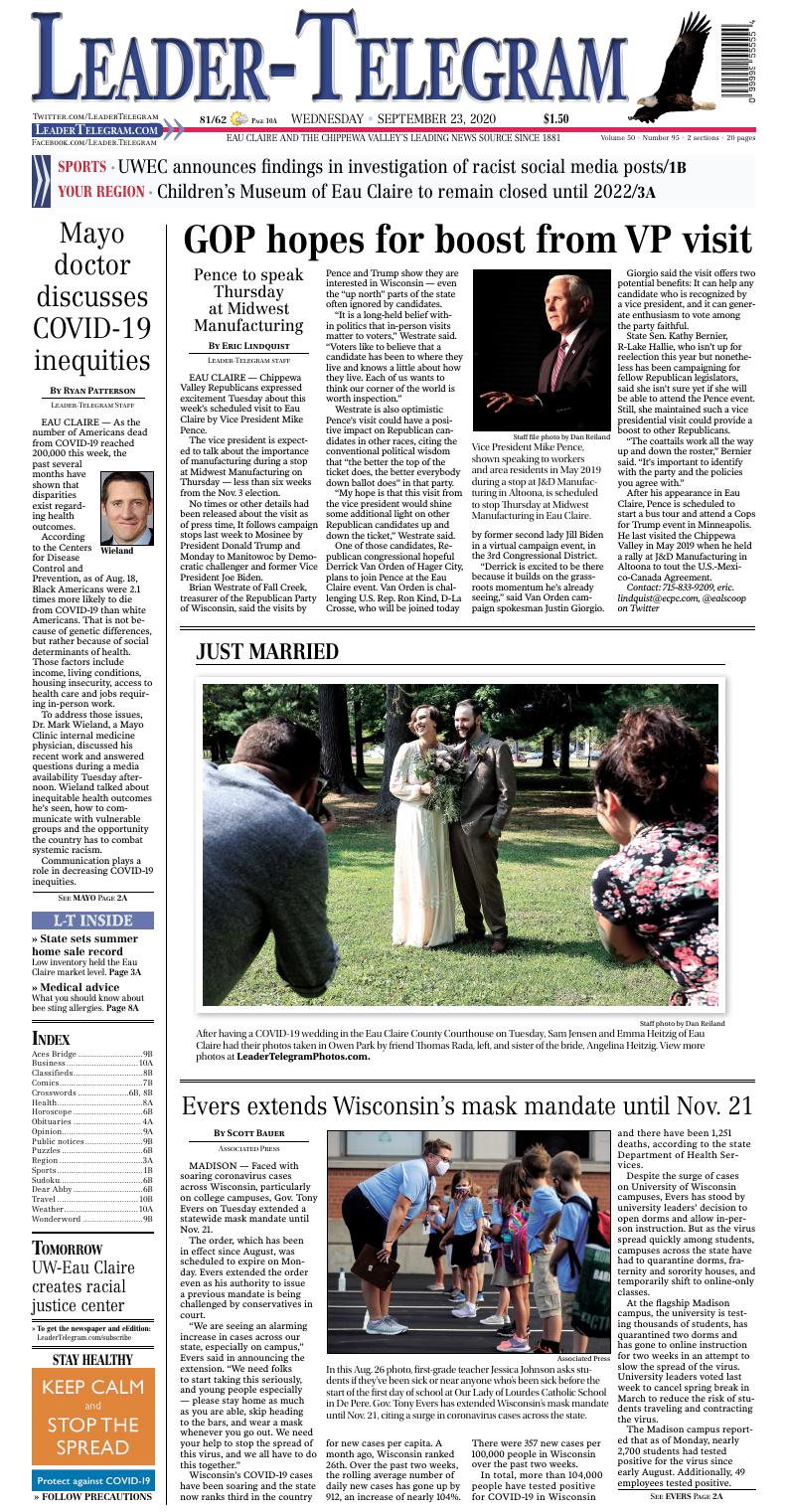 Vice President Mike Pence, shown speaking to workers and area residents in May 2019 during a stop at J&D Manufacturing in Altoona, is scheduled to stop Thursday at Midwest Manufacturing in Eau Claire.

The vice president is expected to talk about the importance of manufacturing during a stop at Midwest Manufacturing on Thursday — less than six weeks from the Nov. 3 election.

No times or other details had been released about the visit as of press time, It follows campaign stops last week to Mosinee by President Donald Trump and Monday to Manitowoc by Democratic challenger and former Vice President Joe Biden.

Brian Westrate of Fall Creek, treasurer of the Republican Party of Wisconsin, said the visits by Pence and Trump show they are interested in Wisconsin — even the “up north” parts of the state often ignored by candidates.

“It is a long-held belief within politics that in-person visits matter to voters,” Westrate said. “Voters like to believe that a candidate has been to where they live and knows a little about how they live. Each of us wants to think our corner of the world is worth inspection.”

Westrate is also optimistic Pence’s visit could have a positive impact on Republican candidates in other races, citing the conventional political wisdom that “the better the top of the ticket does, the better everybody down ballot does” in that party.

“My hope is that this visit from the vice president would shine some additional light on other Republican candidates up and down the ticket,” Westrate said.

One of those candidates, Republican congressional hopeful Derrick Van Orden of Hager City, plans to join Pence at the Eau Claire event. Van Orden is challenging U.S. Rep. Ron Kind, D-La Crosse, who will be joined today by former second lady Jill Biden in a virtual campaign event, in the 3rd Congressional District.

“Derrick is excited to be there because it builds on the grassroots momentum he’s already seeing,” said Van Orden campaign spokesman Justin Giorgio.

Giorgio said the visit offers two potential benefits: It can help any candidate who is recognized by a vice president, and it can generate enthusiasm to vote among the party faithful.

State Sen. Kathy Bernier, R-Lake Hallie, who isn’t up for reelection this year but nonetheless has been campaigning for fellow Republican legislators, said she isn’t sure yet if she will be able to attend the Pence event. Still, she maintained such a vice presidential visit could provide a boost to other Republicans.

“The coattails work all the way up and down the roster,” Bernier said. “It’s important to identify with the party and the policies you agree with.”

After his appearance in Eau Claire, Pence is scheduled to start a bus tour and attend a Cops for Trump event in Minneapolis. He last visited the Chippewa Valley in May 2019 when he held a rally at J&D Manufacturing in Altoona to tout the U.S.-Mexico-Canada Agreement. 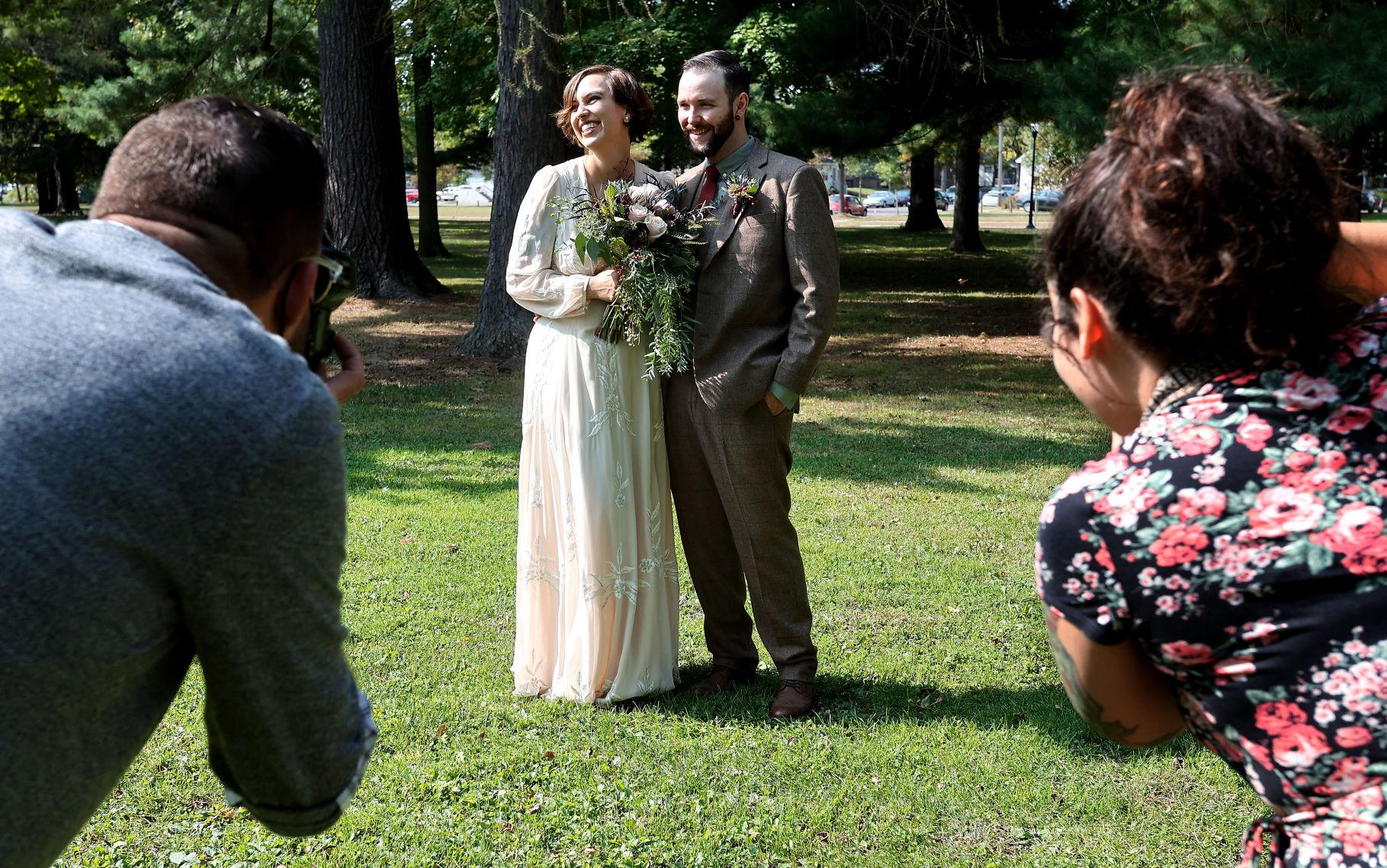 After having a COVID-19 wedding in the Eau Claire County Courthouse on Tuesday, Sam Jensen and Emma Heitzig of Eau Claire had their photos taken in Owen Park by friend Thomas Rada, left, and sister of the bride, Angelina Heitzig. View more photos at LeaderTelegramPhotos.com.

EAU CLAIRE — As the number of Americans dead from COVID-19 reached 200,000 this week, the past several months have shown that disparities exist regarding health outcomes.

According to the Centers for Disease Control and Prevention, as of Aug. 18, Black Americans were 2.1 times more likely to die from COVID-19 than white Americans. That is not because of genetic differences, but rather because of social determinants of health. Those factors include income, living conditions, housing insecurity, access to health care and jobs requiring in-person work.

To address those issues, Dr. Mark Wieland, a Mayo Clinic internal medicine physician, discussed his recent work and answered questions during a media availability Tuesday afternoon. Wieland talked about inequitable health outcomes he’s seen, how to communicate with vulnerable groups and the opportunity the country has to combat systemic racism.

Wieland, who is based in Rochester, Minnesota. is involved with a program that provides accurate and timely COVID-19 information to people in underserved groups such as non-English speakers. The Rochester Community Health Partnership has over 25 community leaders communicating COVID-19 updates in six languages to people in Minnesota while also asking community members what is happening where they live.

Wieland said those two directions of communication are crucial. There are several similar programs around the country, including in Mississippi and Florida, and he believes the program can be done anywhere.

He said the RHCP works because community leaders are trusted by the people with whom they communicate. The most important aspect involves personal interaction and gaining trust before a health emergency like COVID-19 occurs, so that when problems occur there are trusted people to communicate what to do next. Communication can occur via social media, phone call, email, text message or video.

“It’s fundamentally a human experience, and it’s based on interactions that are entirely human,” Wieland said. “Trust is based around that and empathy ties in with that. Without hope and empathy, we just become one more series of talking heads.”

Wieland said COVID-19 information seemingly “changes by the minute” so it is crucial to send accurate, timely updates. It can be tough to match “the frenetic pace of the facts on the ground,” which is why consistent messaging from a trusted human is vital.

Combatting false or misleading information is important as well, Wieland said. Examples of misinformation include supposed home remedies that deal with COVID-19 and conspiracies about the origin of the virus.

In recent months, the most common questions from underserved groups that work with RHCP have addressed a potential vaccine. Wieland said some people have expressed potential hesitation to take a vaccine because of undue political influence.

Wieland said structural racism has contributed to COVID-19 inequities. The coronavirus has similar outcomes to long-term health issues like diabetes and hypertension but has occurred on a quicker, larger level.

“Structural racism is foundational to the disparities that we’re seeing,” Wieland said. “This is a highly concentrated example of that playing out, so it really lays bare the structural inequities that were put in place by design.”

Short-term solutions to address these issues involve more comprehensive testing and contact tracing. Wieland said putting resources in lower-income neighborhoods to gain a better sense of infection and death rates can help. In the long term, Wieland hopes there will be an equitable distribution when a vaccine is available on a wide scale.

Despite all the work that’s being done, Wieland worries that COVID-19 inequities will become worse as time continues.

“Because it’s such a fast-moving shift and at such a great scale, I worry that it’s not enough,” Wieland said.

To work toward fewer health inequities happening in the future, Wieland said it is crucial to address “upstream factors” like the legacy of housing disparities through redlining.

“The COVID crisis provides an opportunity to collectively act on the root causes of these fundamental inequities that have been demonstrated by the pandemic,” Wieland said. 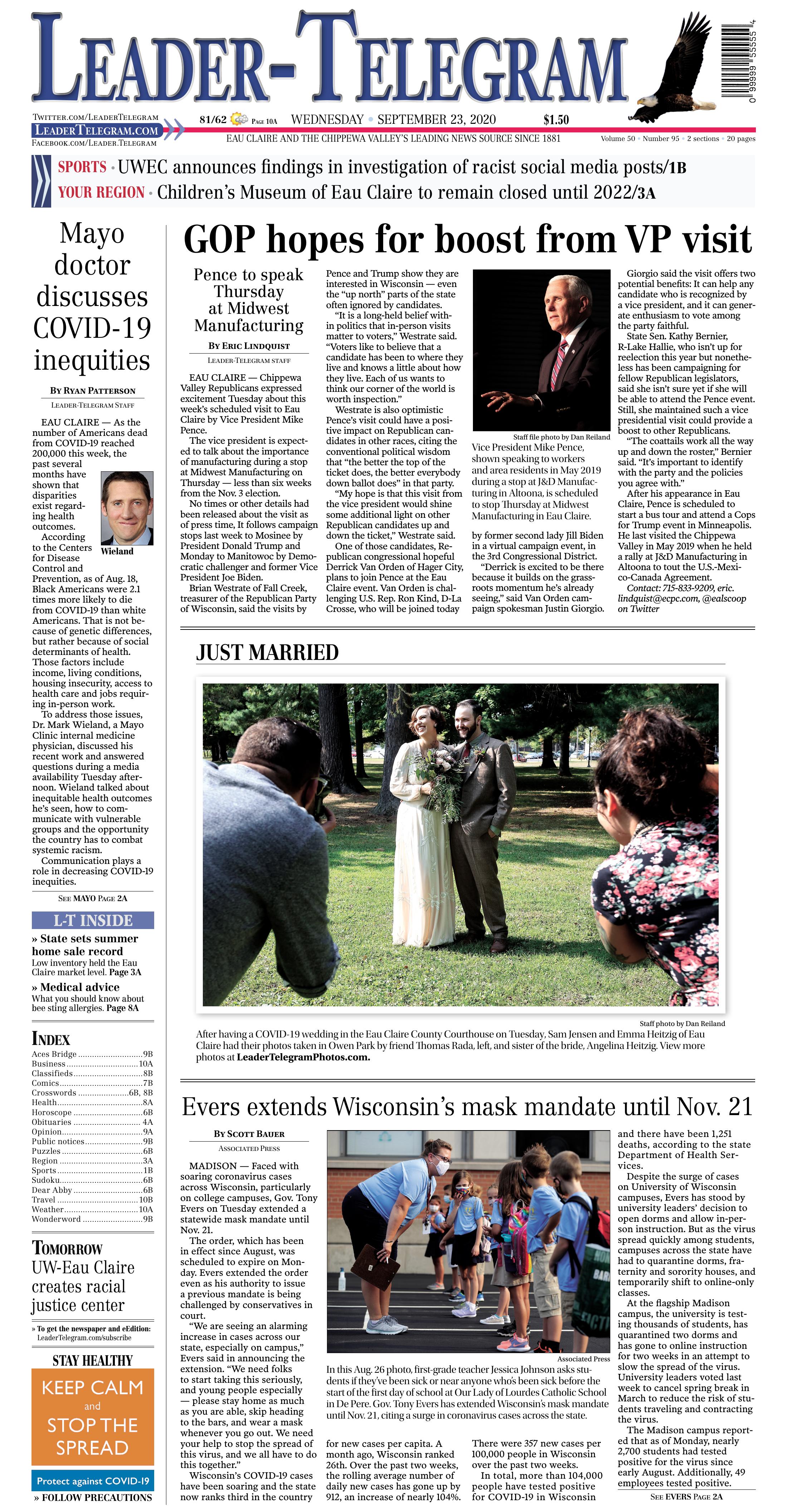