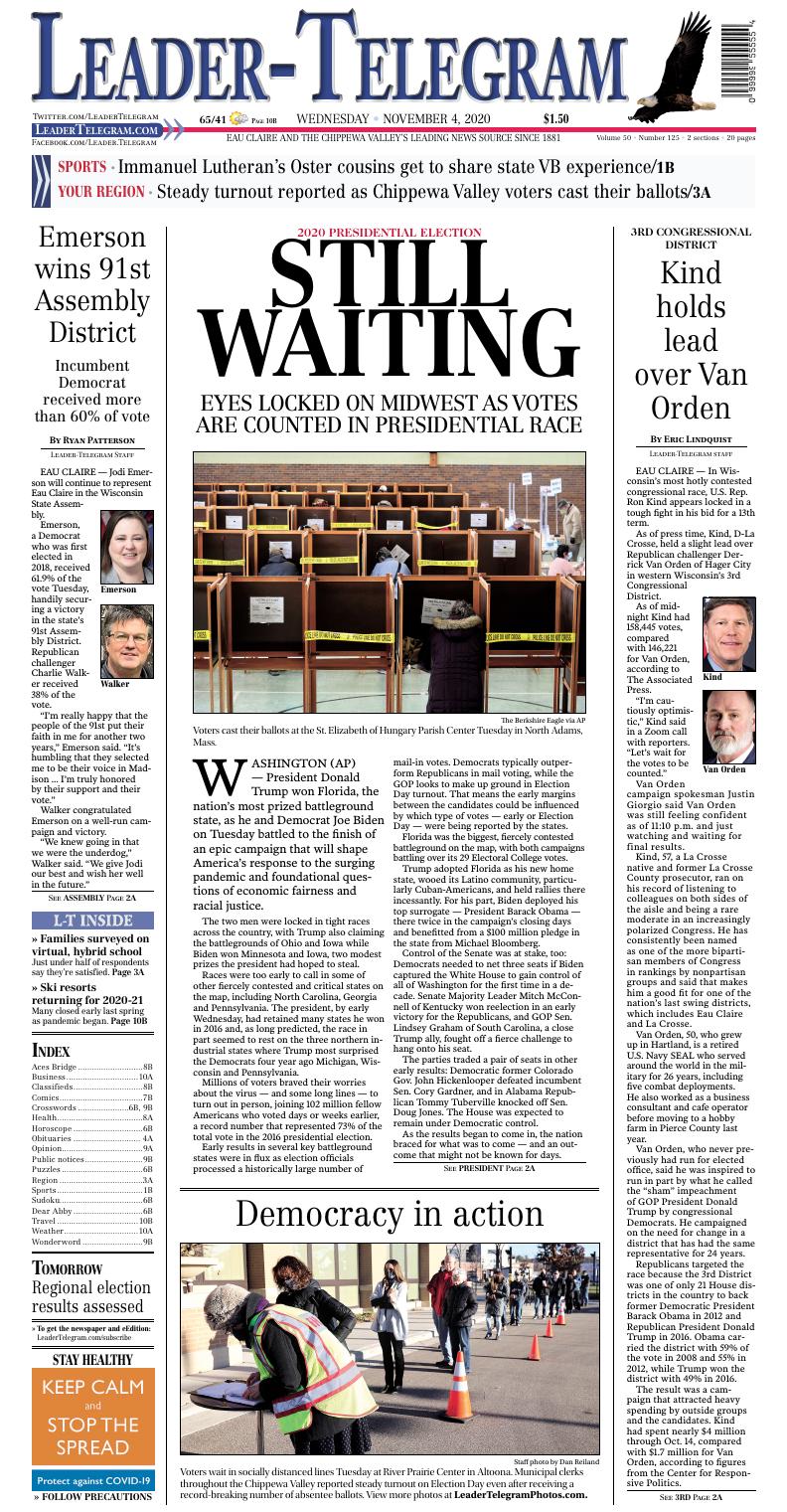 From left, Niki Gotzev, Milo Shea and Ryan Thomas, all of the District of Columbia, react to local election results, Tuesday, Nov. 3, 2020, in Washington.

A demonstrator holds up a sign while waiting for election results Tuesday at Black Lives Matter Plaza in Washington.

Election worker Kristen Mun from Portland empties ballots from a ballot box at the Multnomah County Elections Division Tuesday in Portland, Oregon. Oregon is the first state in the nation to institute voting by mail and automatic voter registration.

WASHINGTON (AP) — President Donald Trump won Florida, the nation’s most prized battleground state, as he and Democrat Joe Biden on Tuesday battled to the finish of an epic campaign that will shape America’s response to the surging pandemic and foundational questions of economic fairness and racial justice.

The two men were locked in tight races across the country, with Trump also claiming the battlegrounds of Ohio and Iowa while Biden won Minnesota and New Hampshire, two modest prizes the president had hoped to steal.

Races were too early to call in some of other fiercely contested and critical states on the map, including North Carolina, Georgia and Pennsylvania. The president, by early Wednesday, had retained many states he won in 2016 and, as long predicted, the race in part seemed to rest on the three northern industrial states where Trump most surprised the Democrats four year ago Michigan, Wisconsin and Pennsylvania.

Millions of voters braved their worries about the virus — and some long lines — to turn out in person, joining 102 million fellow Americans who voted days or weeks earlier, a record number that represented 73% of the total vote in the 2016 presidential election.

Early results in several key battleground states were in flux as election officials processed a historically large number of mail-in votes. Democrats typically outperform Republicans in mail voting, while the GOP looks to make up ground in Election Day turnout. That means the early margins between the candidates could be influenced by which type of votes — early or Election Day — were being reported by the states.

Florida was the biggest, fiercely contested battleground on the map, with both campaigns battling over its 29 Electoral College votes.

Trump adopted Florida as his new home state, wooed its Latino community, particularly Cuban-Americans, and held rallies there incessantly. For his part, Biden deployed his top surrogate — President Barack Obama — there twice in the campaign’s closing days and benefitted from a $100 million pledge in the state from Michael Bloomberg.

Control of the Senate was at stake, too: Democrats needed to net three seats if Biden captured the White House to gain control of all of Washington for the first time in a decade. Senate Majority Leader Mitch McConnell of Kentucky won reelection in an early victory for the Republicans, and GOP Sen. Lindsey Graham of South Carolina, a close Trump ally, fought off a fierce challenge to hang onto his seat.

As the results began to come in, the nation braced for what was to come — and an outcome that might not be known for days.

Outside, a new anti-scaling fence was erected around the White House, and in downtowns from New York to Denver to Minneapolis, workers boarded up businesses lest the vote lead to unrest.

With the worst public health crisis in a century still fiercely present, the pandemic — and Trump’s handling of it — was the inescapable focus for 2020.

For Trump, the election stood as a judgment on his four years in office, a term in which he bent Washington to his will, challenged faith in its institutions and changed how America was viewed across the globe. Rarely trying to unite a country divided along lines of race and class, he has often acted as an insurgent against the government he led while undermining the nation’s scientists, bureaucracy and media.

Biden spent the day last-minute campaigning in Scranton, Pennsylvania, where he was born, and in Philadelphia with a couple of local stops in Wilmington, Delaware, where he was spending Election Night.

The momentum from early voting carried into Election Day, as an energized electorate produced long lines at polling sites throughout the country. Turnout was higher than in 2016 in numerous counties, including all of Florida, nearly every county in North Carolina and more than 100 counties in both Georgia and Texas. That tally seemed sure to increase as more counties reported their turnout figures.

Voters braved worries of the coronavirus, threats of polling place intimidation and expectations of long lines caused by changes to voting systems, but appeared undeterred as turnout appeared it would easily surpass the 139 million ballots cast four years ago.

No major problems arose on Tuesday, outside the typical glitches of a presidential election: Some polling places opened late, robocalls provided false information to voters in Iowa and Michigan, and machines or software malfunctioned in some counties in the battleground states of Ohio, Pennsylvania, Georgia and Texas.

The cybersecurity agency at the Department of Homeland Security said there were no outward signs by midday of any malicious activity.

The record-setting early vote — and legal skirmishing over how it would be counted — drew unsupported allegations of fraud from Trump, who had repeatedly refused to guarantee he would honor the election’s result.

With the coronavirus now surging anew, voters ranked the pandemic and the economy as top concerns in the race between Trump and Biden, according to AP VoteCast, a national survey of the electorate.

The survey found that Trump’s leadership loomed large in voters’ decision-making. Nearly two-thirds of voters said their vote was about Trump — either for him or against him. 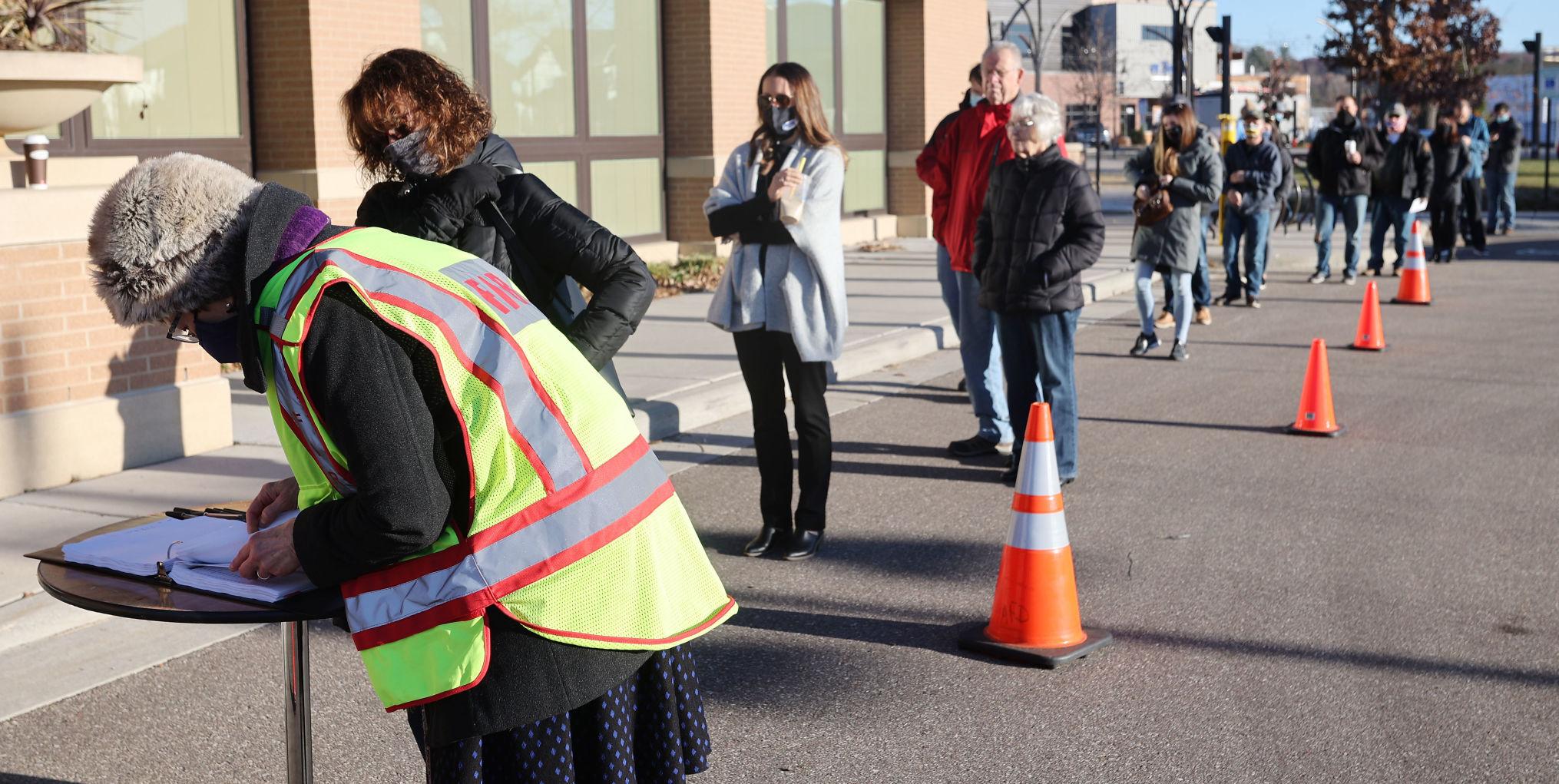 Emerson, a Democrat who was first elected in 2018, received 61.9% of the vote Tuesday, handily securing a victory in the state’s 91st Assembly District. Republican challenger Charlie Walker received 38% of the vote.

“I’m really happy that the people of the 91st put their faith in me for another two years,” Emerson said. “It’s humbling that they selected me to be their voice in Madison … I’m truly honored by their support and their vote.”

Walker congratulated Emerson on a well-run campaign and victory.

“We knew going in that we were the underdog,” Walker said. “We give Jodi our best and wish her well in the future.”

To help combat COVID-19, Emerson supports direct financial relief to workers and small business loans and grants to help the local economy recover. She will also prioritize redistricting legislative boundaries across the state in the upcoming legislative session.

This year marked the first time Walker, the executive director of the Chippewa County Economic Development Corporation, sought elected office. He ran on a business-oriented platform that prioritized getting “back to work” amid the COVID-19 pandemic.

Walker is not sure if he’ll run for elected office again but said he enjoyed the experience this year. He now plans to “get back to work creating jobs and helping the entrepreneurs in the Chippewa Valley and get this economy back and going.”

Unofficially, 18,693 people voted for Emerson, while 11,477 voted for Walker in the district that covers nearly all of the city of Eau Claire. Both Emerson and Walker accepted the outcome and said they appreciated the voters and workers who counted the ballots.

“I don’t think anybody can question the validity of the results,” Emerson said.

“It’s just awesome that democracy is in action,” Walker said.

As of midmorning Wednesday, Kind, D-La Crosse, held a 51% to 49% lead over Republican challenger Derrick Van Orden of Hager City with 604 of the 605 precincts reporting in western Wisconsin’s 3rd Congressional District.

Kind earned 199,676 votes, compared with 188,681 for Van Orden with preliminary tallies complete in more than 99% of precincts, according to The Associated Press, which declared Kind the winner.

"It’s been the honor of my life to represent the area where I was born and raised and where Tawni and I have raised our family," Kind said. "To that end, I want to thank the people of this district for sending me back to Washington. I know firsthand the challenges working families in Wisconsin face, and I am committed to fighting for the farmers, veterans, families, businesses and workers who move our state forward.

"I’m truly humbled by the opportunity to continue working for the people of Wisconsin’s 3rd Congressional District, standing up to powerful special interests, bridging the partisan divide, and bringing our Wisconsin way of life to the halls of Congress.”

"We are seeing the Democratic process at work, and like the rest of the nation, we are waiting to see the final vote tally," Van Orden said. "We will respect the outcome when results are finalized."

Kind, 57, a La Crosse native and former La Crosse County prosecutor, ran on his record of listening to colleagues on both sides of the aisle and being a rare moderate in an increasingly polarized Congress. He has consistently been named as one of the more bipartisan members of Congress in rankings by nonpartisan groups and said that makes him a good fit for one of the nation’s last swing districts, which includes Eau Claire and La Crosse.

Van Orden, 50, who grew up in Hartland, is a retired U.S. Navy SEAL who served around the world in the military for 26 years, including five combat deployments. He also worked as a business consultant and cafe operator before moving to a hobby farm in Pierce County last year.

Van Orden, who never previously had run for elected office, said he was inspired to run in part by what he called the “sham” impeachment of GOP President Donald Trump by congressional Democrats. He campaigned on the need for change in a district that has had the same representative for 24 years.

Republicans targeted the race because the 3rd District was one of only 21 House districts in the country to back former Democratic President Barack Obama in 2012 and Republican President Donald Trump in 2016. Obama carried the district with 59% of the vote in 2008 and 55% in 2012, while Trump won the district with 49% in 2016.

The result was a campaign that attracted heavy spending by outside groups and the candidates. Kind had spent nearly $4 million through Oct. 14, compared with $1.7 million for Van Orden, according to figures from the Center for Responsive Politics.

Kind said he was targeted by about $4.5 million in attack ads from outside political action committees, so he knew it would be a tough campaign.

“I hope people were able to see through that smokescreen that was thrown at them," he said Tuesday night.

The candidates differed widely in their views on the COVID-19 pandemic, which has resulted in more than 230,000 deaths and 9 million cases in the United States this year.

Van Orden said he objects to state and local health orders issued by Democratic Gov. Tony Evers and county public health departments in hopes of stemming the spread of the coronavirus, referring to government mandates as “socialism.” Van Orden argued that owners should decide policies in their businesses and consumers should then decide which businesses they want to support.

By contrast, Kind supported Evers’ latest order to limit mass gatherings and said he agrees with public health officials who have urged people to wear masks, socially distance and avoid large gatherings. Kind, who said tackling the pandemic was his top priority, called for people to follow the advice of health care professionals to slow the spread of the virus. 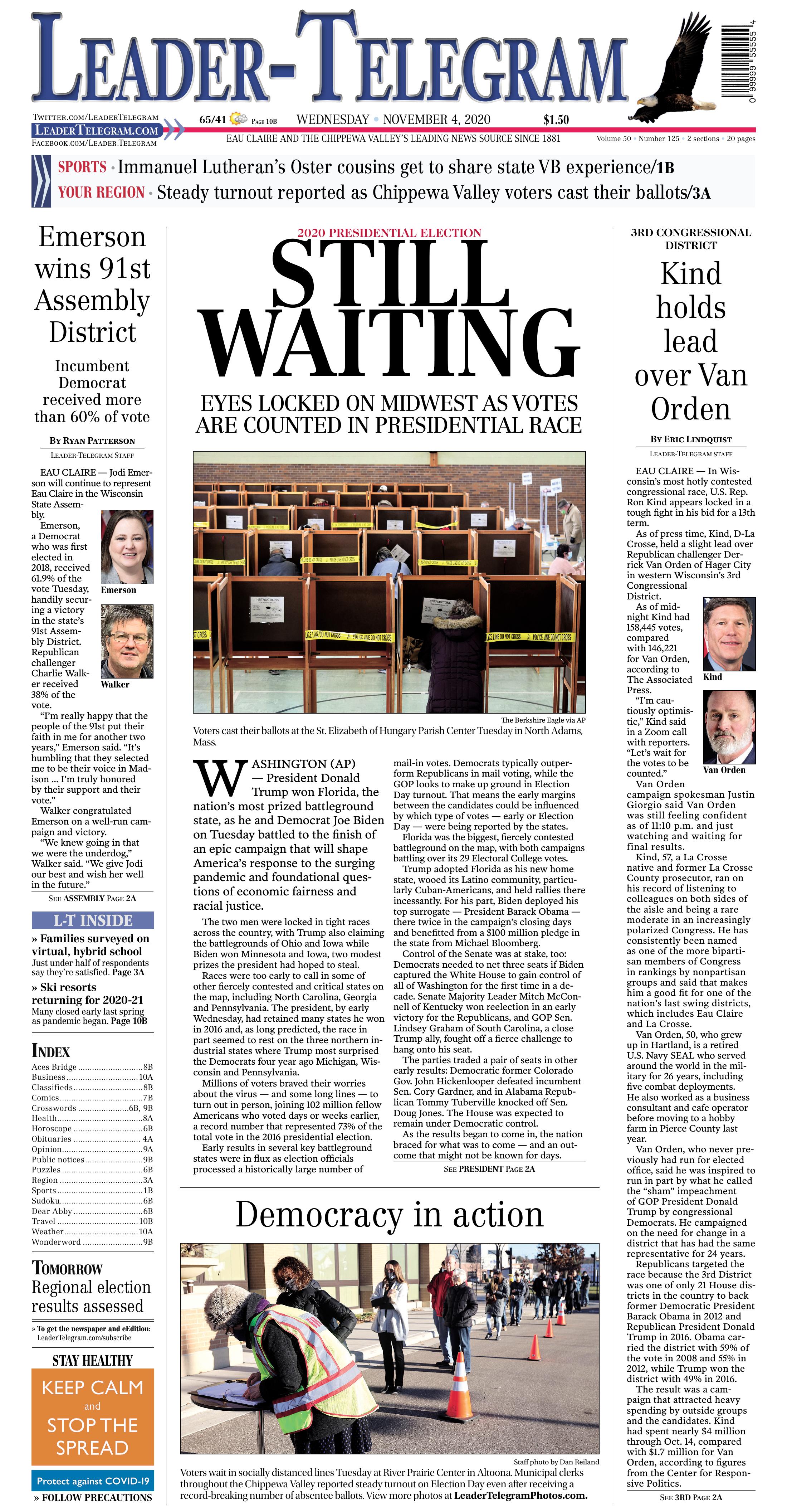