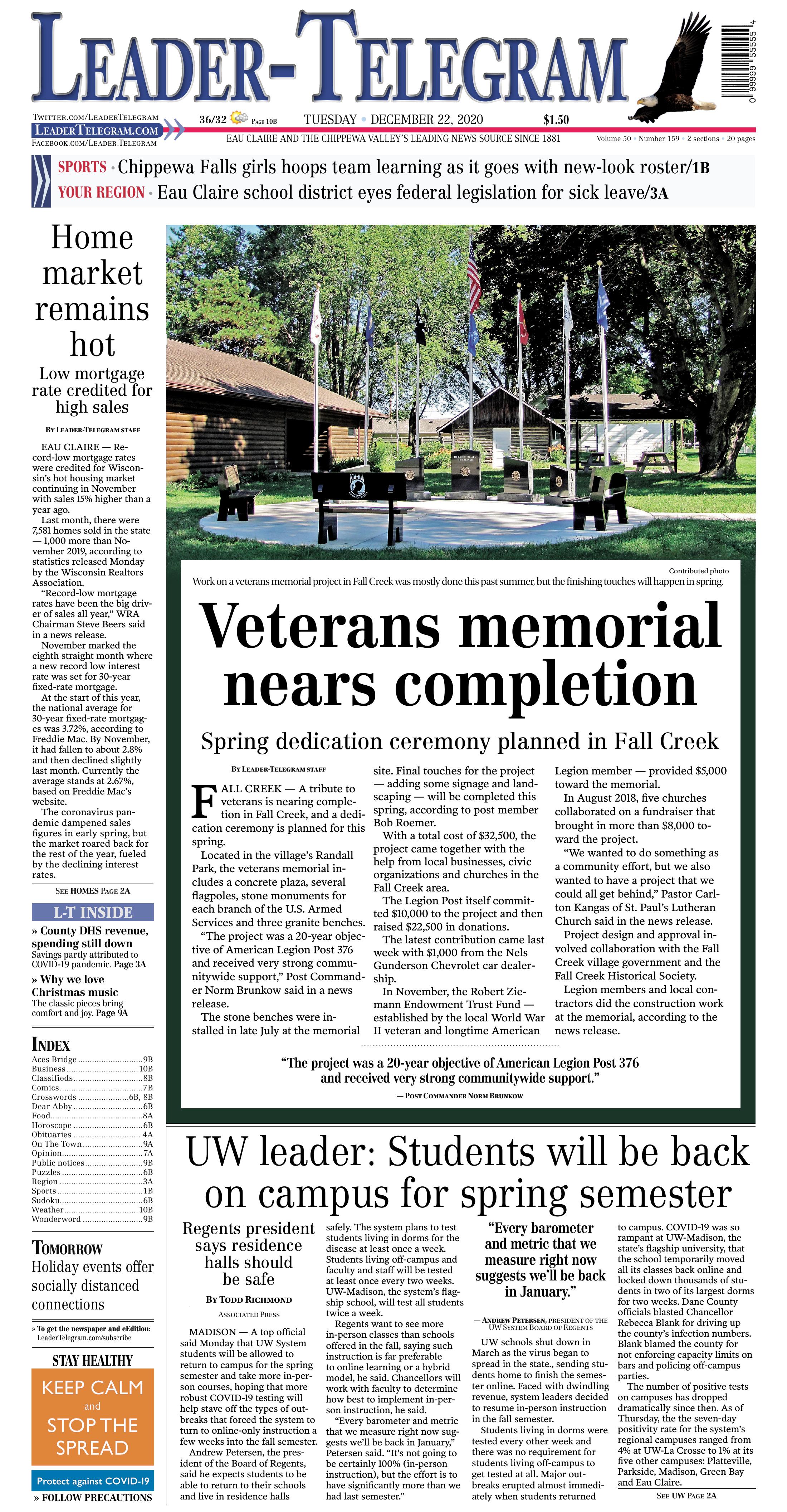 Work on a veterans memorial project in Fall Creek was mostly done this past summer, but the finishing touches will happen in spring.

FALL CREEK — A tribute to veterans is nearing completion in Fall Creek, and a dedication ceremony is planned for this spring.

Located in the village’s Randall Park, the veterans memorial includes a concrete plaza, several flagpoles, stone monuments for each branch of the U.S. Armed Services and three granite benches.

The stone benches were installed in late July at the memorial site. Final touches for the project — adding some signage and landscaping — will be completed this spring, according to post member Bob Roemer.

With a total cost of $32,500, the project came together with the help from local businesses, civic organizations and churches in the Fall Creek area.

In August 2018, five churches collaborated on a fundraiser that brought in more than $8,000 toward the project.

“We wanted to do something as a community effort, but we also wanted to have a project that we could all get behind,” Pastor Carlton Kangas of St. Paul’s Lutheran Church said in the news release.

Legion members and local contractors did the construction work at the memorial, according to the news release.

"The project was a 20-year objective of American Legion Post 376 and received very strong communitywide support."

MADISON — A top official said Monday that UW System students will be allowed to return to campus for the spring semester and take more in-person courses, hoping that more robust COVID-19 testing will help stave off the types of outbreaks that forced the system to turn to online-only instruction a few weeks into the fall semester.

Andrew Petersen, the president of the Board of Regents, said he expects students to be able to return to their schools and live in residence halls safely. The system plans to test students living in dorms for the disease at least once a week. Students living off-campus and faculty and staff will be tested at least once every two weeks. UW-Madison, the system’s flagship school, will test all students twice a week.

Regents want to see more in-person classes than schools offered in the fall, saying such instruction is far preferable to online learning or a hybrid model, he said. Chancellors will work with faculty to determine how best to implement in-person instruction, he said.

“Every barometer and metric that we measure right now suggests we’ll be back in January,” Petersen said. “It’s not going to be certainly 100% (in-person instruction), but the effort is to have significantly more than we had last semester.”

UW schools shut down in March as the virus began to spread in the state., sending students home to finish the semester online. Faced with dwindling revenue, system leaders decided to resume in-person instruction in the fall semester.

Students living in dorms were tested every other week and there was no requirement for students living off-campus to get tested at all. Major outbreaks erupted almost immediately when students returned to campus. COVID-19 was so rampant at UW-Madison, the state’s flagship university, that the school temporarily moved all its classes back online and locked down thousands of students in two of its largest dorms for two weeks. Dane County officials blasted Chancellor Rebecca Blank for driving up the county’s infection numbers. Blank blamed the county for not enforcing capacity limits on bars and policing off-campus parties.

The number of positive tests on campuses has dropped dramatically since then. As of Thursday, the the seven-day positivity rate for the system’s regional campuses ranged from 4% at UW-La Crosse to 1% at its five other campuses: Platteville, Parkside, Madison, Green Bay and Eau Claire.

Petersen said that since the start of the pandemic, the system will have administered more than 500,000 tests by the end of December for students, faculty and community members. He added that he hopes system campuses can become regional vaccine distribution hubs this spring.

Petersen’s remarks come as the system hopes to persuade Democratic Gov. Tony Evers and Republican legislators to give system employees a 4.5% pay raise in the next two-year state budget. That could be a tall order because the state faces a projected $373 million deficit and Republican legislators have traditionally been wary of giving such raises.

"Every barometer and metric that we measure right now suggests we'll be back in January."

-- Andrew Petersen, president of the UW System Board of Regents

EAU CLAIRE — Record-low mortgage rates were credited for Wisconsin’s hot housing market continuing in November with sales 15% higher than a year ago.

Last month, there were 7,581 homes sold in the state — 1,000 more than November 2019, according to statistics released Monday by the Wisconsin Realtors Association.

“Record-low mortgage rates have been the big driver of sales all year,” WRA Chairman Steve Beers said in a news release.

At the start of this year, the national average for 30-year fixed-rate mortgages was 3.72%, according to Freddie Mac. By November, it had fallen to about 2.8% and then declined slightly last month. Currently the average stands at 2.67%, based on Freddie Mac’s website.

The coronavirus pandemic dampened sales figures in early spring, but the market roared back for the rest of the year, fueled by the declining interest rates.

Now Wisconsin is on pace to not only beat last year’s home sales figures, but also set a new record for the state, according to the Wisconsin Realtors Association.

Sales growth was seen throughout the state, including counties in the Chippewa Valley that saw their numbers improve slightly last month.

The 139 homes sold in Eau Claire County was one more than November 2019’s figure. Chippewa County saw 81 homes sold last month and Dunn County had 64 houses change hands — both up six units from a year before.

Chippewa and Dunn counties are each on pace to beat their 2019 home sale totals, but Eau Claire County is behind.

Year-to-date figures for Chippewa and Dunn counties were up 11.5% and 7.7%, respectively. But Eau Claire County’s sales were lagging 2.6% behind 2019’s figures as of last month.

One factor that’s been holding the market back from seeing even more sales is low inventory.

“We’re selling homes faster than they’re coming on the market, which is leading to our persistent housing shortages,” WRA President and CEO Michael Theo said in the news release.

Total listings for the year are down about 31% from 2019, which has only strengthened it as a seller’s market.

“Strong demand and tight supply continue to drive prices up,” Theo said, “and our median price has remained above the $200,000 threshold since March, which is the first time we’ve seen that in Wisconsin.”