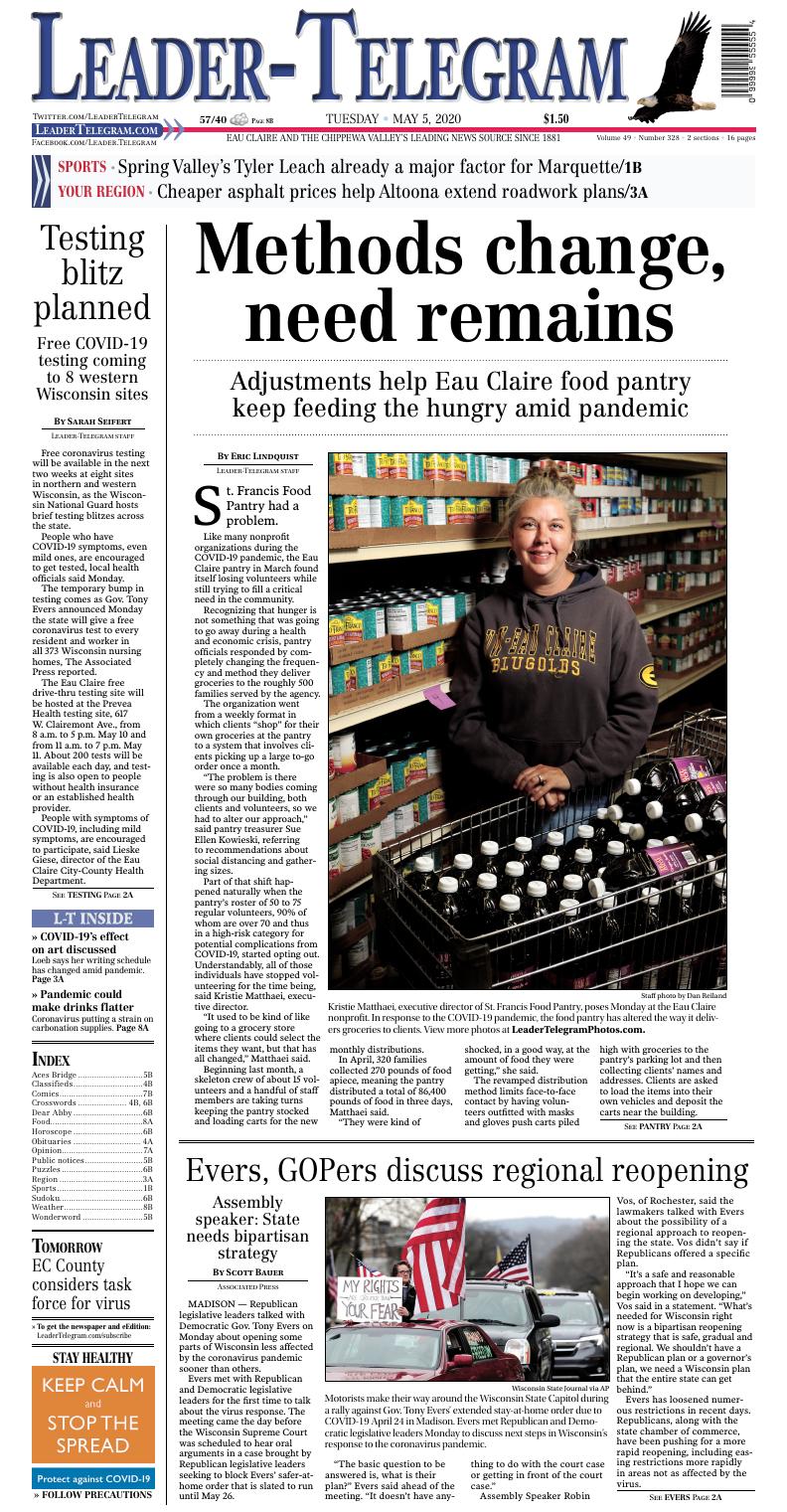 Kristie Matthaei, executive director of St. Francis Food Pantry, poses Monday at the Eau Claire nonprofit. In response to the COVID-19 pandemic, the food pantry has altered the way it delivers groceries to clients. View more photos at LeaderTelegramPhotos.com.

Like many nonprofit organizations during the COVID-19 pandemic, the Eau Claire pantry in March found itself losing volunteers while still trying to fill a critical need in the community.

Recognizing that hunger is not something that was going to go away during a health and economic crisis, pantry officials responded by completely changing the frequency and method they deliver groceries to the roughly 500 families served by the agency.

The organization went from a weekly format in which clients “shop” for their own groceries at the pantry to a system that involves clients picking up a large to-go order once a month.

“The problem is there were so many bodies coming through our building, both clients and volunteers, so we had to alter our approach,” said pantry treasurer Sue Ellen Kowieski, referring to recommendations about social distancing and gathering sizes.

Part of that shift happened naturally when the pantry’s roster of 50 to 75 regular volunteers, 90% of whom are over 70 and thus in a high-risk category for potential complications from COVID-19, started opting out. Understandably, all of those individuals have stopped volunteering for the time being, said Kristie Matthaei, executive director.

“It used to be kind of like going to a grocery store where clients could select the items they want, but that has all changed,” Matthaei said.

Beginning last month, a skeleton crew of about 15 volunteers and a handful of staff members are taking turns keeping the pantry stocked and loading carts for the new monthly distributions.

“They were kind of shocked, in a good way, at the amount of food they were getting,” she said.

The revamped distribution method limits face-to-face contact by having volunteers outfitted with masks and gloves push carts piled high with groceries to the pantry’s parking lot and then collecting clients’ names and addresses. Clients are asked to load the items into their own vehicles and deposit the carts near the building.

Volunteers and staff then sanitize the carts and load them back up with groceries for the next family.

To avoid long lines, the pantry crew in April loaded a bunch of carts ahead of time “so we were pretty much ready at 9 a.m. to start pushing food out the door,” Matthaei said.

“It’s an essential business, and I’m really glad we’ve been able to keep doing it in some fashion,” Kowieski said. “We are still serving those in need the best we can.”

A lack of access during the pandemic to donated produce nearing expiration from local grocery stores has resulted in a shift to a greater percentage of nonperishable food, Kowieski said.

“It’s a lot of canned fruits and vegetables, but that’s just going to have to do for now,” she said.

Still, each family received about 60 pounds of frozen meat, as the supply chain has not been an issue yet for the pantry, Matthaei said. The major suppliers for St. Francis, the largest food pantry in western Wisconsin, are Eau Claire-based Feed My People Food Bank and The Emergency Food Assistance Program operated by the U.S. Department of Agriculture.

Matthaei credited community donations for helping the pantry get by this spring after two its major sources of support — annual food drives by the U.S. Postal Service and the Boy Scouts — were canceled because of concerns about the coronavirus.

Despite the sudden lack of personal choice and the relative inconvenience of collecting a month’s worth of food at a time, Matthaei said families served by St. Francis were appreciative of the groceries as well as the pantry’s initiative in finding a way to maintain the supply of food through a difficult time with unprecedented restrictions on contact among people.

“Considering all of the changes, it was very well-received. We didn’t have anybody trying to return things, which we feared,” Matthaei said, noting that families were encouraged to give items they didn’t want to other people who would use them.”

So far, demand hasn’t changed much from the normal level despite the surge in layoffs, furloughs and temporary pay cuts in the Chippewa Valley and nationwide.

Matthaei speculated that could be the result of federal stimulus payments and increases in other food aid programs and that demand could rise sharply when those extra benefits expire.

In the meantime, she said, pantry officials already have begun planning how to “slowly start getting back to a new normal once things start opening up.”

In this April 24 file photo, motorists make their way around the Wisconsin State Capitol during a rally against Gov. Tony Evers' extended stay-at-home order due to COVID-19 in Madison.

MADISON — Republican legislative leaders talked with Democratic Gov. Tony Evers on Monday about opening some parts of Wisconsin less affected by the coronavirus pandemic sooner than others.

Evers met with Republican and Democratic legislative leaders for the first time to talk about the virus response. The meeting came the day before the Wisconsin Supreme Court was scheduled to hear oral arguments in a case brought by Republican legislative leaders seeking to block Evers’ safer-at-home order that is slated to run until May 26.

“The basic question to be answered is, what is their plan?” Evers said ahead of the meeting. “It doesn’t have anything to do with the court case or getting in front of the court case.”

Assembly Speaker Robin Vos, of Rochester, said the lawmakers talked with Evers about the possibility of a regional approach to reopening the state. Vos didn’t say if Republicans offered a specific plan.

“It’s a safe and reasonable approach that I hope we can begin working on developing,” Vos said in a statement. “What’s needed for Wisconsin right now is a bipartisan reopening strategy that is safe, gradual and regional. We shouldn’t have a Republican plan or a governor’s plan, we need a Wisconsin plan that the entire state can get behind.”

Evers has loosened numerous restrictions in recent days. Republicans, along with the state chamber of commerce, have been pushing for a more rapid reopening, including easing restrictions more rapidly in areas not as affected by the virus.

Evers announced on Monday that every resident and worker in all 373 Wisconsin nursing homes will receive a free coronavirus test as part of a plan to expand testing to everyone who needs one — as many as 85,000 people a week.

Evers said state health officials started contacting nursing homes on Monday to coordinate supplies before testing more than 10,000 residents and staff each week in May.

Nursing homes nationwide have been hot spots for outbreaks of COVID-19. As of last Wednesday, there were 93 public health investigations in long-term care facilities in Wisconsin, and 25 facilities had more than five confirmed cases, the state health department said.

Evers’ reopening plan calls for a loosening of restrictions after a 14-day downward trend in positive cases as a percentage of total tests. There has been no clear trend over the past seven days. Positive cases were 9.9% of all tests on Monday, which was down from 11.1% the day before.

For most people, the coronavirus causes mild or moderate symptoms, such as fever and cough that clear up in two to three weeks. For some, especially older adults and people with existing health problems, it can cause more severe illness, including pneumonia.

Free coronavirus testing will be available in the next two weeks at eight sites in northern and western Wisconsin, as the Wisconsin National Guard hosts brief testing blitzes across the state.

People who have COVID-19 symptoms, even mild ones, are encouraged to get tested, local health officials said Monday.

The temporary bump in testing comes as Gov. Tony Evers announced Monday the state will give a free coronavirus test to every resident and worker in all 373 Wisconsin nursing homes, The Associated Press reported.

The Eau Claire free drive-thru testing site will be hosted at the Prevea Health testing site, 617 W. Clairemont Ave., from 8 a.m. to 5 p.m. May 10 and from 11 a.m. to 7 p.m. May 11. About 200 tests will be available each day, and testing is also open to people without health insurance or an established health provider.

People with symptoms of COVID-19, including mild symptoms, are encouraged to participate, said Lieske Giese, director of the Eau Claire City-County Health Department.

Possible symptoms of the virus are fever (a measured temperature above 100.4 degrees Fahrenheit), cough, shortness of breath or difficulty breathing, chills, repeated shaking with chills, muscle aches, headaches, sore throats or a new loss of taste or smell, according to the Centers for Disease Control and Prevention.

Any Wisconsin resident with symptoms of COVID-19 is welcome at any of the testing sites.

The drive-thru testing sites are not limited to residents of those counties, Giese said Monday.

The state plans to announce more testing sites soon, according to a news release from Evers’ office.

The National Guard’s first testing days in western Wisconsin were in Alma and Turtle Lake.

For people without health insurance, many of the testing sites in Eau Claire are “not turning people away,” Giese said. She encouraged people to call those testing sites’ phone screening processes, and if they have difficulty, to call the health department’s COVID-19 hotline at 715-831-7425.

Eau Claire County has identified nine new cases of the virus since Friday, bringing its total to 43 cases. The actual number of those infected is likely far higher, health officials have said, because some people show minor or no symptoms.

“Recently all our counties have seen an increased number of cases,” said Angela Weideman, Chippewa County public health director, at a news conference Monday in Eau Claire. “Those positive cases have close contacts within the Chippewa Valley. This means positive cases have been out either for essential work and errands, or nonessential reasons, like gatherings with friends and family.”

The Wisconsin National Guard’s testing blitz is part of a bigger plan for the state to ramp up testing.

Evers’ plan to reopen the state includes testing up to 85,000 people per week and seeing a decrease in cases. Giese said Monday the state has 51 labs with the capacity to run 11,347 coronavirus tests per day — but only about 3,000 tests are being run per day.

“We’re still well below the capacity number, and well below what we’d like to be at for the state,” she said.

Evers called the state’s testing capacity of over 11,000 tests per day “one of our success stories here in Wisconsin,” but noted that even though labs have the capacity, the number of tests being run in Wisconsin per day is much lower.

Statewide, 8,236 people have tested positive for the virus and 340 have died, according to the state Department of Health Services. Those who have been hospitalized with COVID-19 number 1,621.

COVID-19 is the disease caused by the novel coronavirus SARS-CoV-2. It causes mild symptoms in about 80% of people infected, but severe complications can develop, including pneumonia. 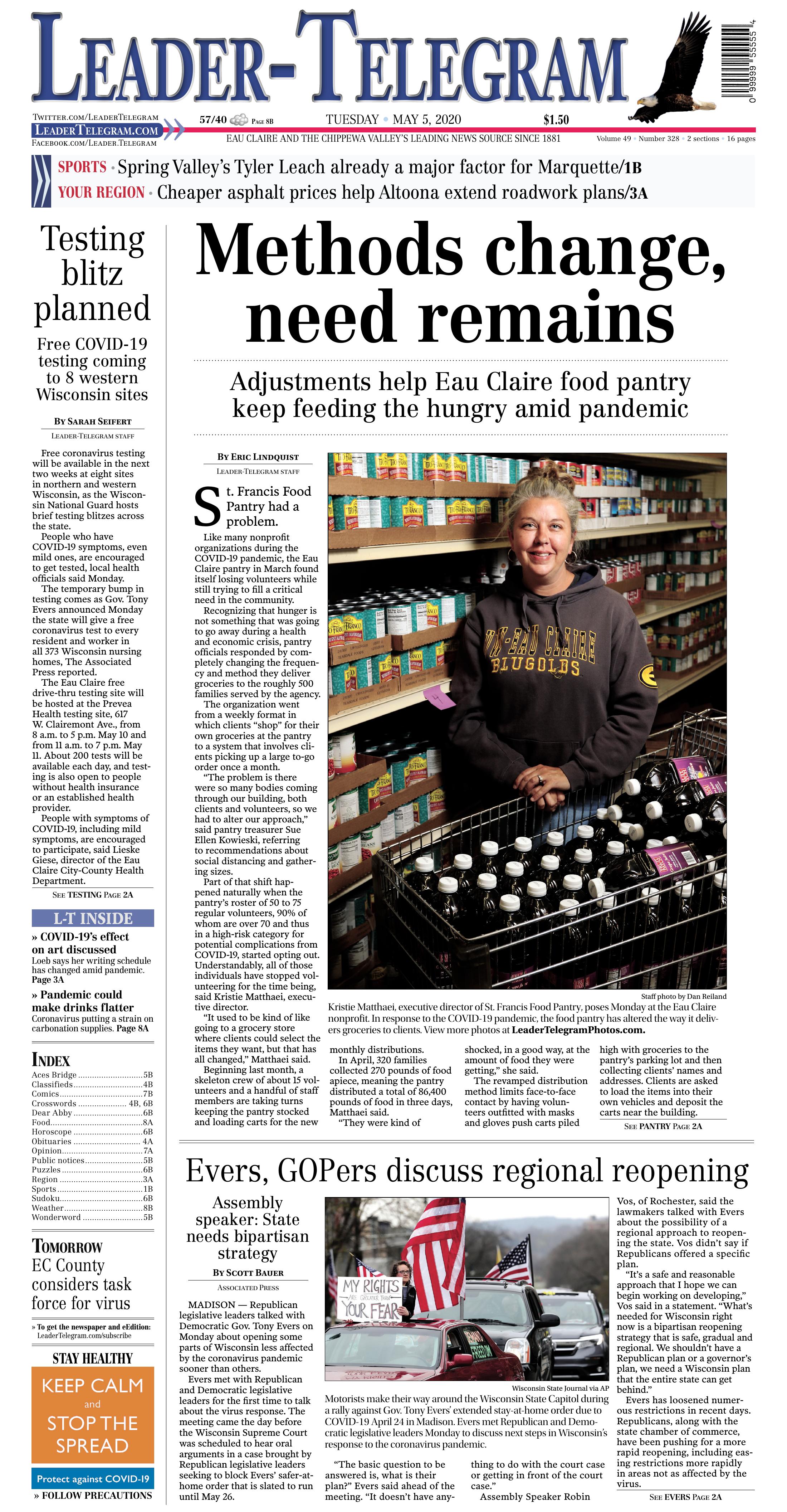