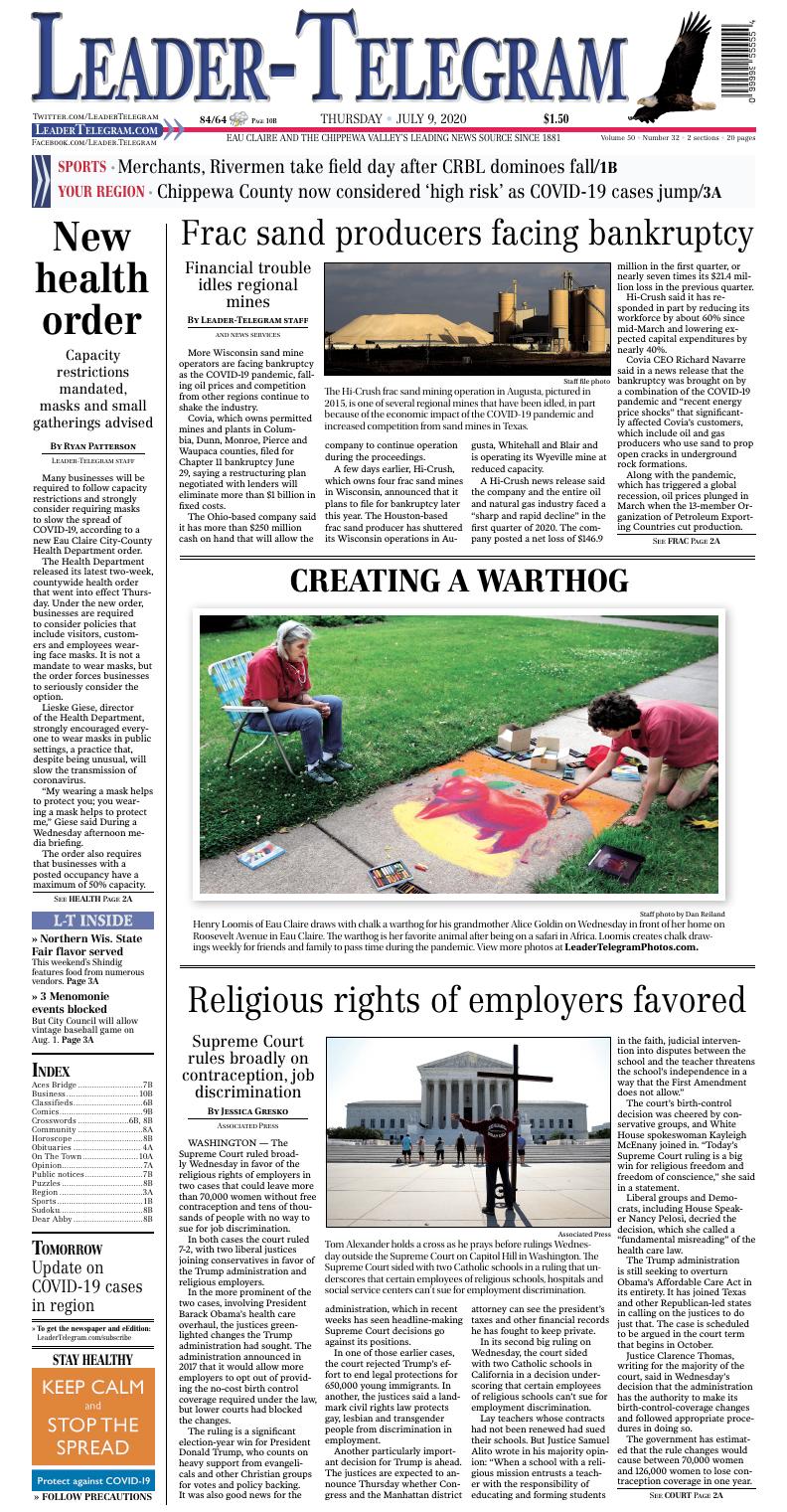 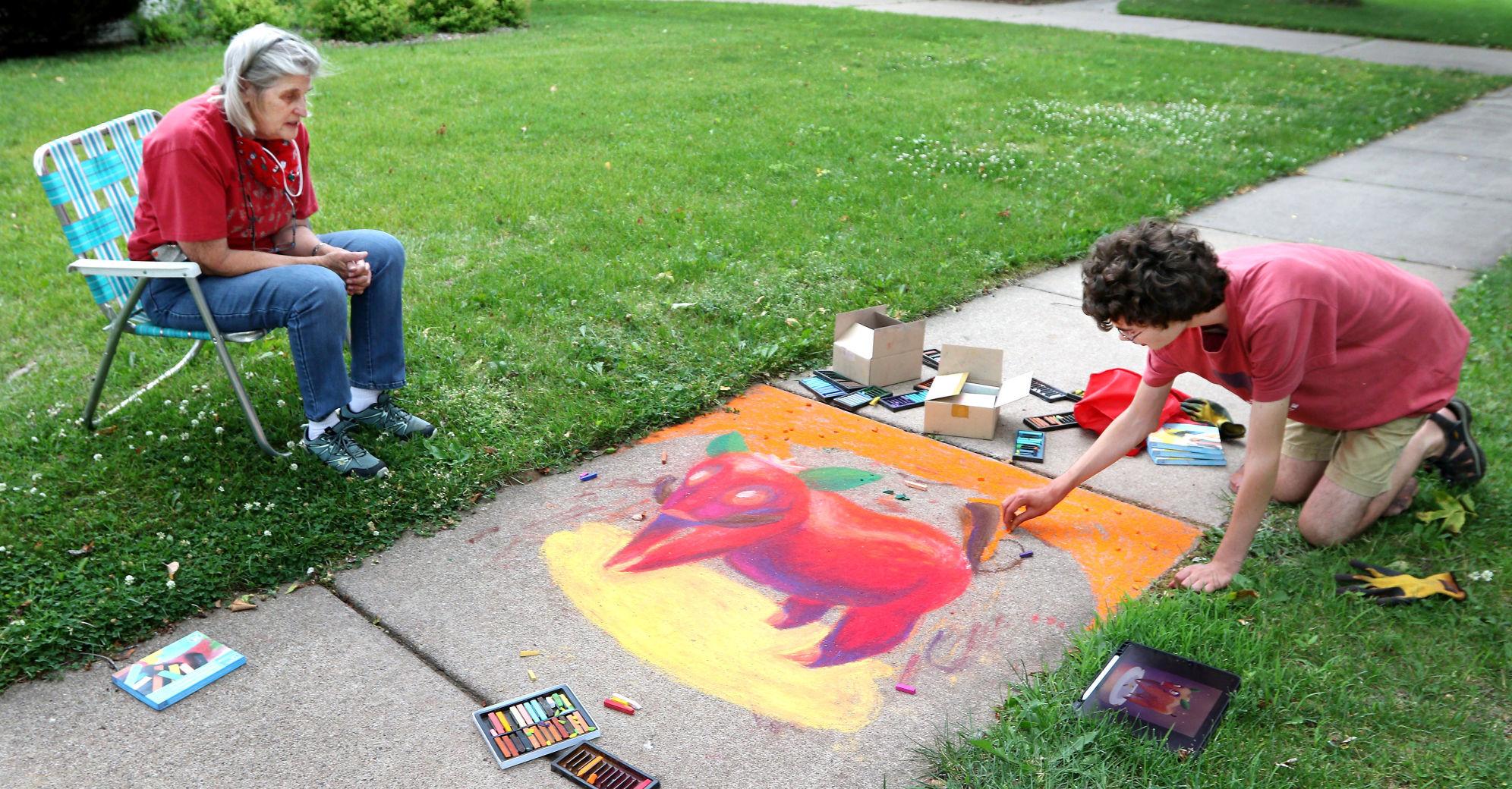 Henry Loomis of Eau Claire draws with chalk a warthog for his grandmother Alice Goldin on Wednesday in front of her home on Roosevelt Avenue in Eau Claire. The warthog is her favorite animal after being on a safari in Africa. Loomis creates chalk drawings weekly for friends and family to pass time during the pandemic. View more photos at LeaderTelegramPhotos.com.

Tom Alexander holds a cross as he prays prior to rulings outside the Supreme Court on Capitol Hill in Washington, Wednesday, July 8, 2020. The Supreme Court is siding with two Catholic schools in a ruling that underscores that certain employees of religious schools, hospitals and social service centers can’t sue for employment discrimination.(AP Photo/Patrick Semansky)

WASHINGTON — The Supreme Court ruled broadly Wednesday in favor of the religious rights of employers in two cases that could leave more than 70,000 women without free contraception and tens of thousands of people with no way to sue for job discrimination.

In both cases the court ruled 7-2, with two liberal justices joining conservatives in favor of the Trump administration and religious employers.

In the more prominent of the two cases, involving President Barack Obama’s health care overhaul, the justices greenlighted changes the Trump administration had sought. The administration announced in 2017 that it would allow more employers to opt out of providing the no-cost birth control coverage required under the law, but lower courts had blocked the changes.

The ruling is a significant election-year win for President Donald Trump, who counts on heavy support from evangelicals and other Christian groups for votes and policy backing. It was also good news for the administration, which in recent weeks has seen headline-making Supreme Court decisions go against its positions.

In one of those earlier cases, the court rejected Trump’s effort to end legal protections for 650,000 young immigrants. In another, the justices said a landmark civil rights law protects gay, lesbian and transgender people from discrimination in employment.

Another particularly important decision for Trump is ahead. The justices are expected to announce Thursday whether Congress and the Manhattan district attorney can see the president’s taxes and other financial records he has fought to keep private.

In its second big ruling on Wednesday, the court sided with two Catholic schools in California in a decision underscoring that certain employees of religious schools can’t sue for employment discrimination.

Lay teachers whose contracts had not been renewed had sued their schools. But Justice Samuel Alito wrote in his majority opinion: “When a school with a religious mission entrusts a teacher with the responsibility of educating and forming students in the faith, judicial intervention into disputes between the school and the teacher threatens the school’s independence in a way that the First Amendment does not allow.”

The court’s birth-control decision was cheered by conservative groups, and White House spokeswoman Kayleigh McEnany joined in. “Today’s Supreme Court ruling is a big win for religious freedom and freedom of conscience,” she said in a statement.

Liberal groups and Democrats, including House Speaker Nancy Pelosi, decried the decision, which she called a “fundamental misreading” of the health care law.

The Trump administration is still seeking to overturn Obama’s Affordable Care Act in its entirety. It has joined Texas and other Republican-led states in calling on the justices to do just that. The case is scheduled to be argued in the court term that begins in October.

Justice Clarence Thomas, writing for the majority of the court, said in Wednesday’s decision that the administration has the authority to make its birth-control-coverage changes and followed appropriate procedures in doing so.

The government has estimated that the rule changes would cause between 70,000 women and 126,000 women to lose contraception coverage in one year.

“Today, for the first time, the Court casts totally aside countervailing rights and interests in its zeal to secure religious rights to the nth degree,” she wrote in a dissent joined by Justice Sonia Sotomayor.

Birth control coverage has been a topic of contention since the health care law was passed.

Initially, churches, synagogues and mosques were exempt from the contraceptive coverage requirement. The Obama administration also created a way by which religiously affiliated organizations including hospitals, universities and charities could opt out of paying for contraception, but women on their health plans would still get no-cost birth control. Some groups complained the opt-out process itself violated their religious beliefs, and years of legal wrangling followed.

After Trump took office, officials announced changes. Under a new policy issued by the Department of Health and Human Services, more categories of employers, including publicly traded companies, can opt out of providing no-cost birth control to women by claiming religious objections. The policy also allows some employers, though not publicly traded companies, to raise moral objections and do the same.

The changes were blocked by courts after New Jersey and Pennsylvania challenged them.

Pennsylvania Attorney General Josh Shapiro said in a statement after the ruling, “This fight is not over.”

In the religious-schools discrimination case, the court had ruled unanimously in 2012 that the Constitution prevents ministers from suing their churches for employment discrimination, but the justices didn’t rigidly define who counts as a minister.

Many businesses will be required to follow capacity restrictions and strongly consider requiring masks to slow the spread of COVID-19, according to a new Eau Claire City-County Health Department order.

The Health Department released its latest two-week, countywide health order that went into effect Thursday. Under the new order, businesses are required to consider policies that include visitors, customers and employees wearing face masks. It is not a mandate to wear masks, but the order forces businesses to seriously consider the option.

Lieske Giese, director of the Health Department, strongly encouraged everyone to wear masks in public settings, a practice that, despite being unusual, will slow the transmission of coronavirus.

The order also requires that businesses with a posted occupancy have a maximum of 50% capacity.

The previous health order asked entities to consider capacity restrictions, while this order mandates they do so. Facilities required to post occupancy include restaurants, bars, bowling alleys, courtrooms and gymnasiums.

For public gatherings, a maximum of 100 people indoors and 250 people outdoors remains, but the new order strongly discourages events with more than 50 individuals.

Eau Claire County has 307 positive coronavirus cases, 235 of whom have recovered. Ten cases were confirmed Tuesday and seven on Wednesday. The county also has 8,825 negative results, a positive rate of around 3.36%.

That percentage has significantly increased recently, and Giese said the county’s daily average positivity rate in the past 14 days stands at 14.5% despite a fairly steady number of tests.

“That is an indication, broadly, that there is more disease in the community,” Giese said.

Local community spread, meaning positive cases where a person isn’t sure where they were infected, are at 34%.

According to the Wisconsin Department of Health Services, there are 10 active COVID-19 investigations in Eau Claire County. Of those 10, three are at long-term care facilities, two of which are named: Dove Healthcare-West Eau Claire and Oakwood Health Services. There is one current investigation at a workplace, one at a group home and five at other places not specified.

The state DHS will not release the names of businesses where there have been at least two confirmed cases of the coronavirus after businesses groups and Republican lawmakers opposed the idea.

Giese gave an example of multiple people going to a business after they were infected at a separate location. Naming that business could be misleading and lead people to assume the business did something wrong, she said.

“It really doesn’t give the public good information about what is actually going on with disease transmission,” Giese said.

Wisconsin has 33,154 confirmed cases and 611,150 negative results, a positive rate of about 5.15%. There have been 807 COVID-19 deaths in Wisconsin, a daily increase of two. There were 44 hospitalizations Wednesday, bringing that total number to 3,683 statewide. 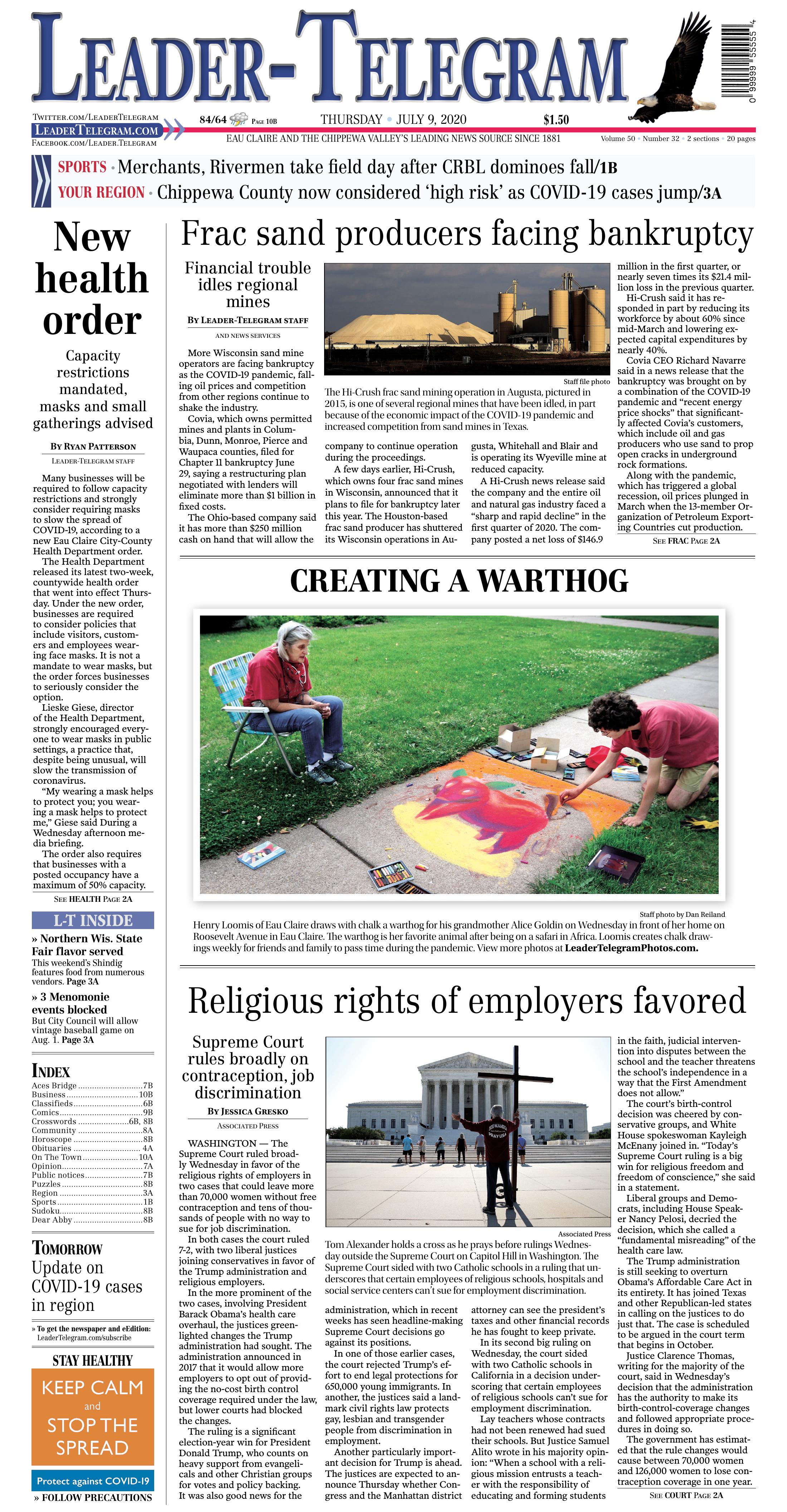