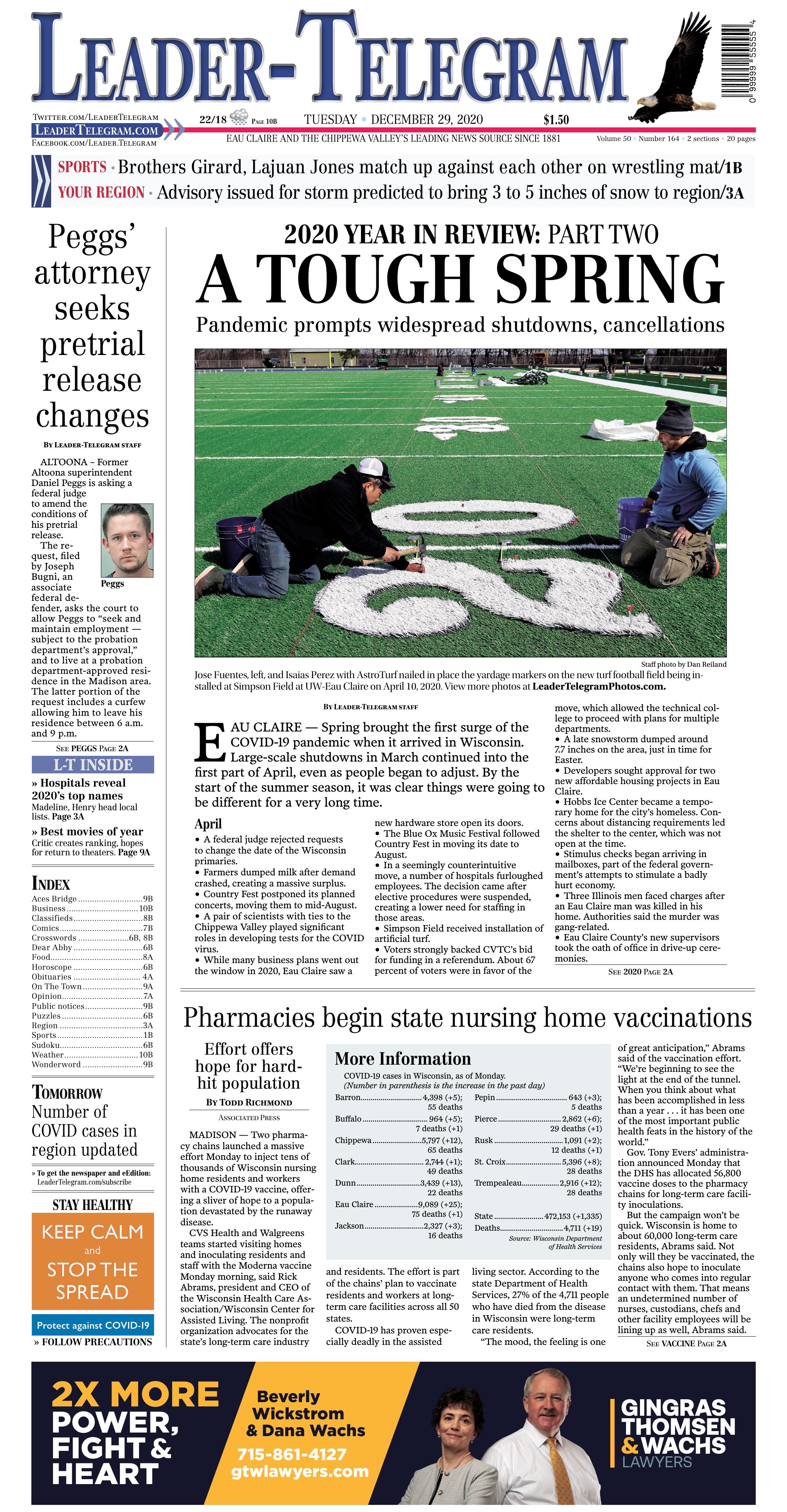 Driving up, swearing in Eau Claire County Clerk Janet Loomis administers a drive-up oath of office to re-elected County Board member Gerald Wilkie on Friday afternoon outside the courthouse in Eau Claire. In other election years, the 29 county supervisors get sworn in at the same time in the county boardroom, but the COVID-19 pandemic prompted a change in procedure this time. Supervisors were sworn in individually throughout Friday while staying in their vehicles as a way to maintain social distancing intended to slow the spread of coronavirus. In the election held earlier this month, 26 incumbents and three newcomers won two-year terms on the County Board.

From left, high school graduates Michael Usher of Regis High School, Ally Klauck of North High School and Cole Pecor of Memorial High School are pictured Friday. All three will graduate this spring, but the coronavirus is forcing school districts to find new ways to hold ceremonies — some virtual, some postponing and hoping for summer. View more photos at LeaderTelegramPhotos.com.

EAU CLAIRE — Spring brought the first surge of the COVID-19 pandemic when it arrived in Wisconsin. Large-scale shutdowns in March continued into the first part of April, even as people began to adjust. By the start of the summer season, it was clear things were going to be different for a very long time.

A federal judge rejected requests to change the date of the Wisconsin primaries.

Country Fest postponed its planned concerts, moving them to mid-August.

A pair of scientists with ties to the Chippewa Valley played significant roles in developing tests for the COVID virus.

While many business plans went out the window in 2020, Eau Claire saw a new hardware store open its doors.

In a seemingly counterintuitive move, a number of hospitals furloughed employees. The decision came after elective procedures were suspended, creating a lower need for staffing in those areas. 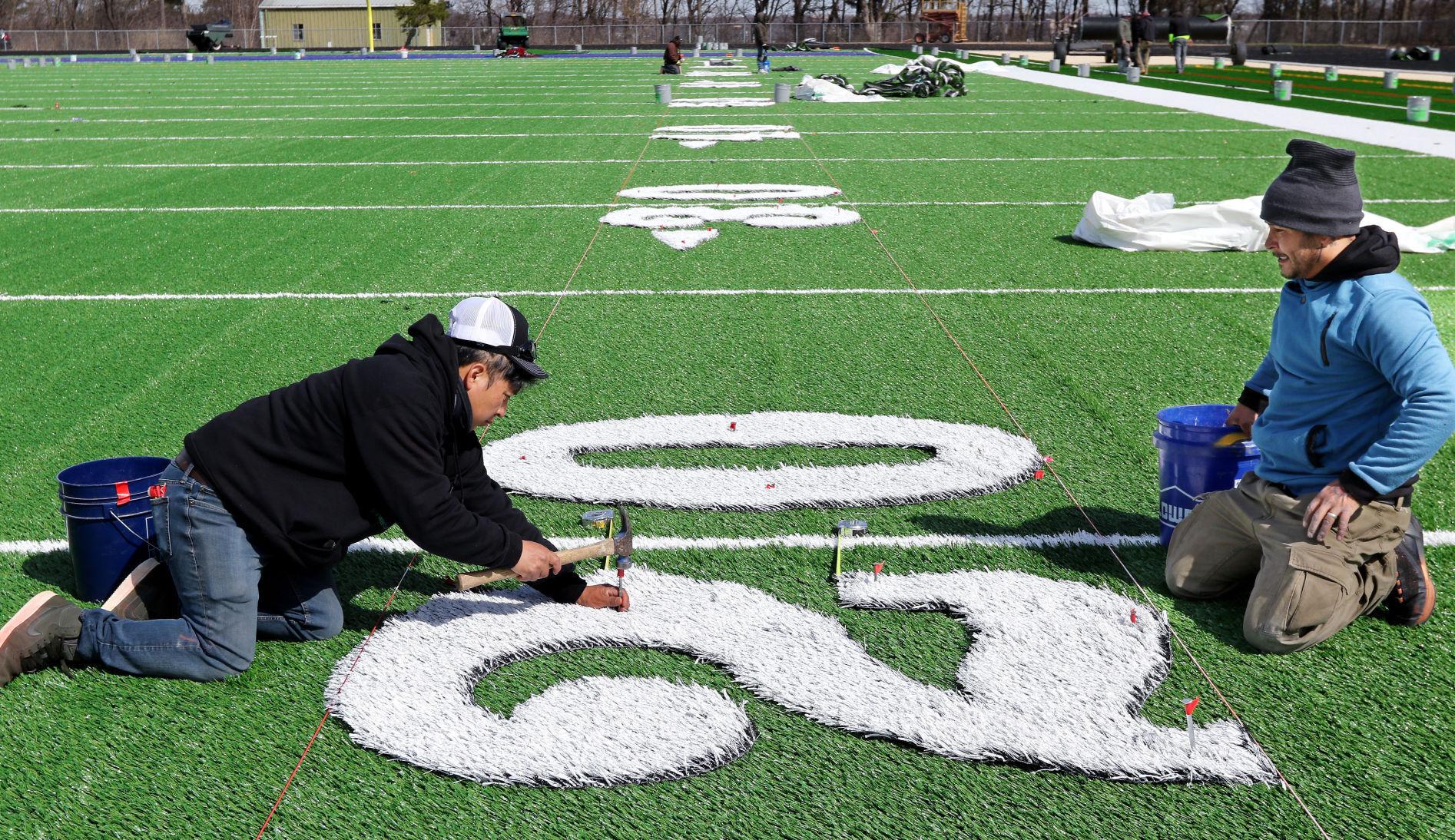 Jose Fuentes, left, and Isaias Perez with AstroTurf nailed in place the yardage markers on the new turf football field being installed at Simpson Field at UW-Eau Claire on April 10, 2020. View more photos at LeaderTelegramPhotos.com.

Voters strongly backed CVTC’s bid for funding in a referendum. About 67 percent of voters were in favor of the move, which allowed the technical college to proceed with plans for multiple departments.

A late snowstorm dumped around 7.7 inches on the area, just in time for Easter. 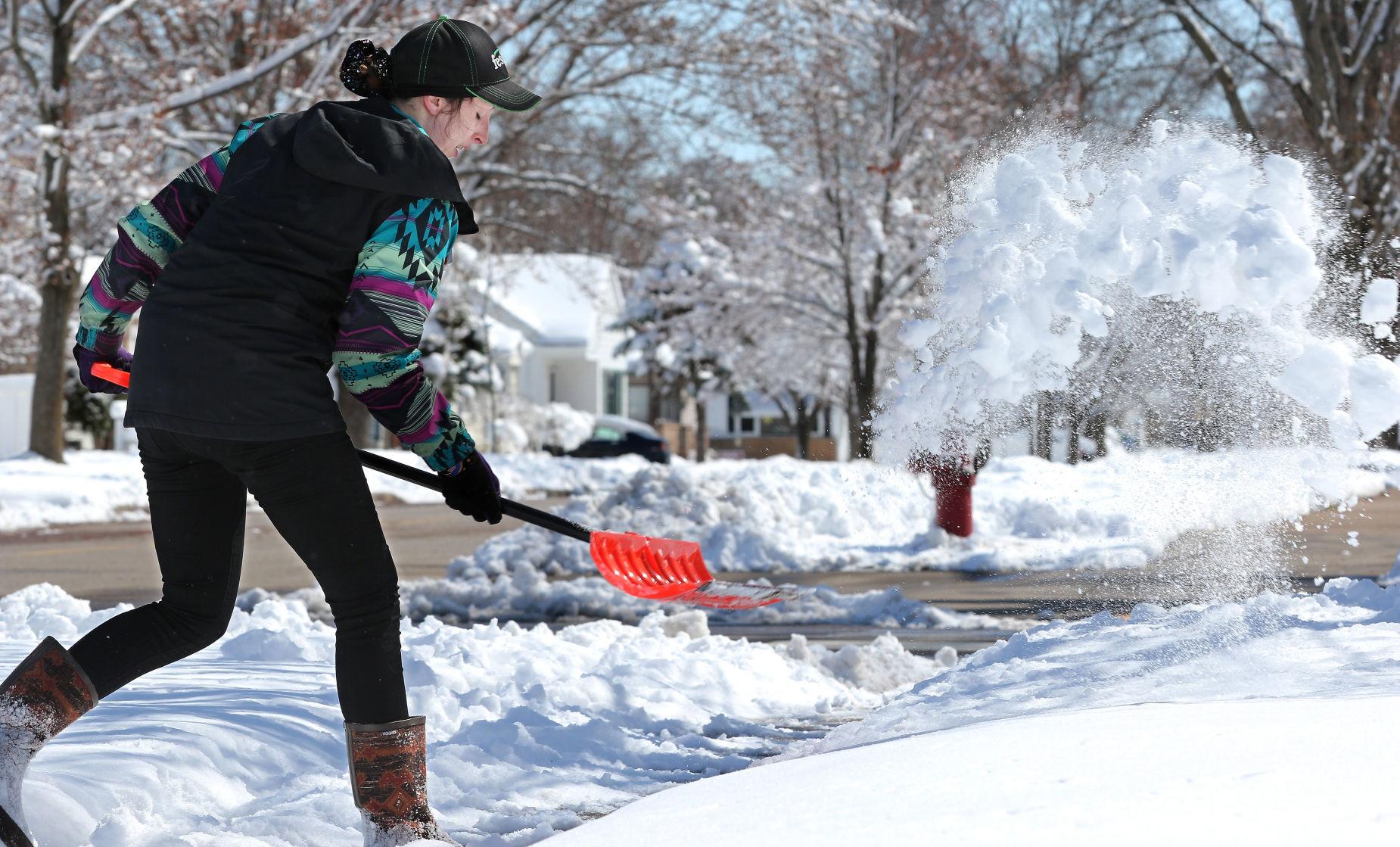 Jacqueline Stanton clears snow from her sidewalk along Fenwick Avenue on Monday in Eau Claire. Eau Claire received 7.7 inches of snow on Easter Sunday and, according to AccuWeather, there is a chance for a rain or snow shower in spots today. But after that there is no precipitation in the forecast through Saturday, with highs ranging from 38 degrees Wednesday to 56 on Saturday. For more weather information, see Page 8B. View more photos at LeaderTelegramPhotos.com.

Hobbs Ice Center became a temporary home for the city’s homeless. Concerns about distancing requirements led the shelter to the center, which was not open at the time.

Three Illinois men faced charges after an Eau Claire man was killed in his home. Authorities said the murder was gang-related. 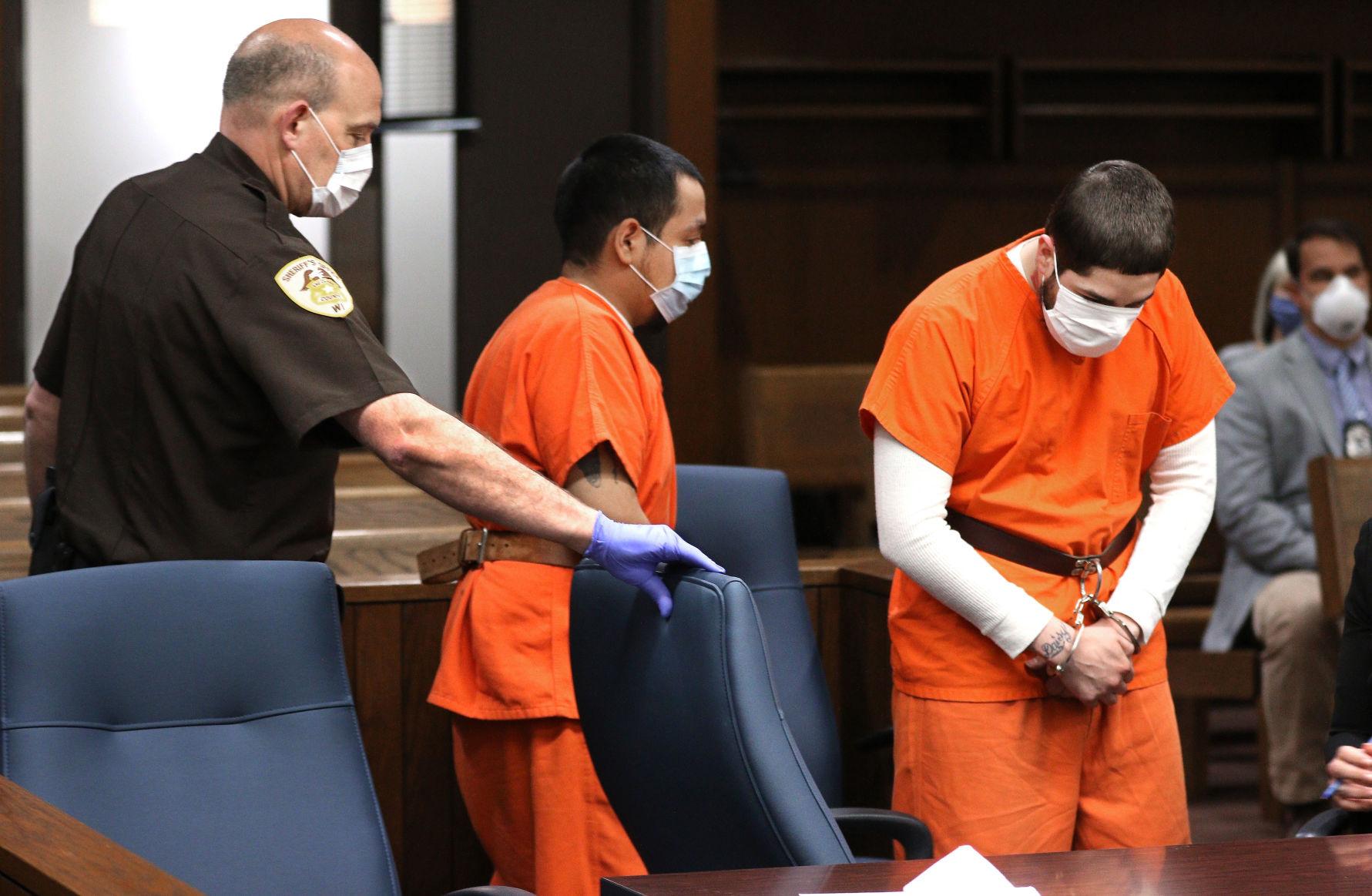 Joe Moya, left, and Juan Olivarez are escorted into Eau Claire County Court for their preliminary hearing on Tuesday. The Illinois men are accused of fatally shooting Edwin J. Garcia-Smith in Eau Claire on March 20. View more photos at LeaderTelegramPhotos.com.

Between April 1-15 the area food bank said it distributed 500,000 pounds of food. Many turned to options for food assistance after losing their jobs to COVID closures.

As the initial surge of COVID cases began to retreat, some hospitals began making plans to resume elective procedures with additional precautions in place.

The Boyd Feed & Supply Mill was destroyed in a fire. 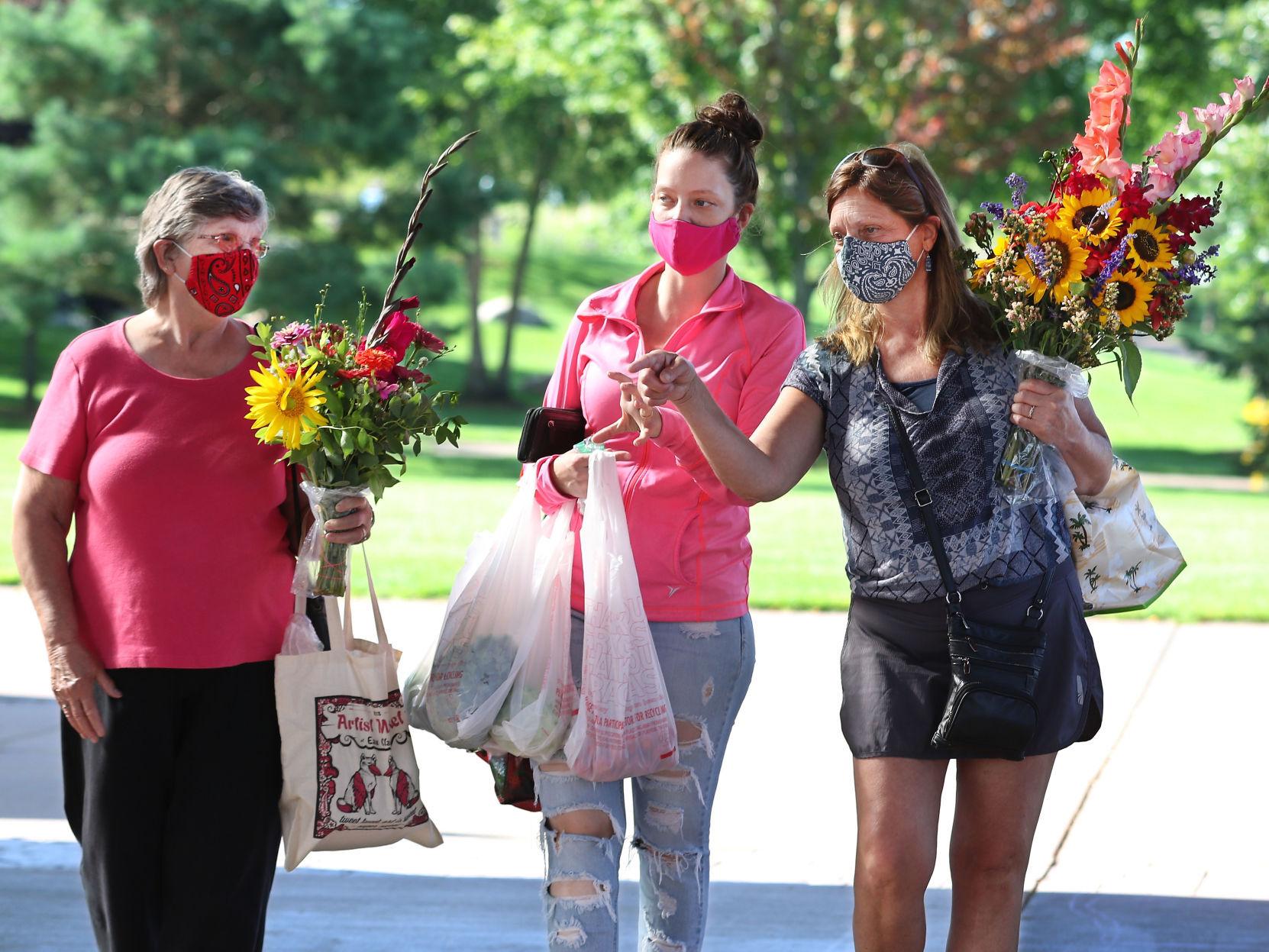 From left, Darlene Spehle shops with her granddaughter Danielle Jenkins and daughter Laurie Starks on Wednesday at the Eau Claire Downtown Farmers Market in Phoenix Park. All are from Eau Claire. View more photos at LeaderTelegramPhotos.com.

Many members of the Class of 2020 mourned missing out on commencement after large indoor ceremonies were ruled out due to the pandemic.

Altoona said lower-than-expected asphalt prices meant the city would be able to do more road work in the summer than originally planned.

Wisconsin businesses began reopening, though many had restrictions and not all did so successfully.

Officials with the Pablo Center were cautiously optimistic about being able to reopen in October.

The area surrounding the Pablo Center at the Confluence was all lit in blue Thursday evening, April 16, 2020. The change in color was made as part of a nationwide campaign to offer support and gratitude to the people working on the frontlines of the COVID-19 epidemic. The blue colors can be seen on Thursday evenings for the forseeable future. This panoramic image was created by stitching ten photos together. View more photos at LeaderTelegramPhotos.com.

Chippewa Valley Technical College said it would reopen for students in the fall.

Protests erupted after the death of George Floyd while in police custody. The protests quickly spread nationwide.

Experts estimated the Eau Claire area lost around 15,000 jobs due to pandemic shutdowns.

Eau Claire County said an error in the Department of Human Services created a $1.29 million shortfall for the department.

Hundreds rallied at Owen Park, and a downtown march drew even larger crowds. Protesters sought reforms in the wake of George Floyd’s death. 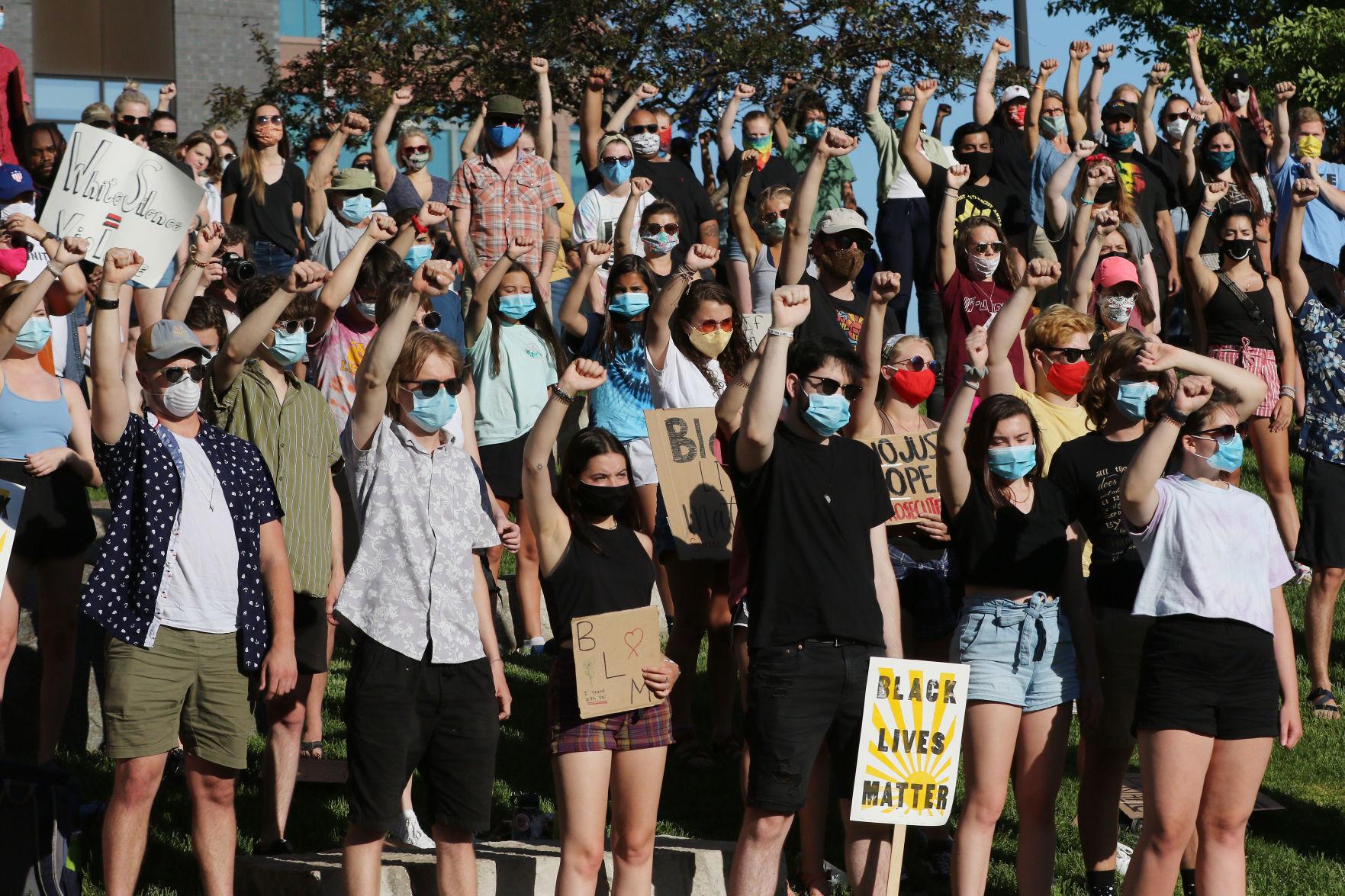 Hundreds of protesters gather Friday at Phoenix Park in Eau Claire to call for racial justice in the wake of the May 25 death of George Floyd, a black man killed while in the custody of Minneapolis police.

Chalkfest went virtual, one of a number of efforts to bring activities online during the pandemic.

The City of Eau Claire created a task force to look at issues of police transparency.

City officials resumed the search for a new city administrator in Eau Claire.

A national ranking named Eau Claire one of the most livable cities in the country.

Another round of heavy rains brought flash flooding and killed one in Wisconsin.

Libraries in the Chippewa Valley began to plan for reopening.

MADISON — Two pharmacy chains launched a massive effort Monday to inject tens of thousands of Wisconsin nursing home residents and workers with a COVID-19 vaccine, offering a sliver of hope to a population devastated by the runaway disease.

CVS Health and Walgreens teams started visiting homes and inoculating residents and staff with the Moderna vaccine Monday morning, said Rick Abrams, president and CEO of the Wisconsin Health Care Association/Wisconsin Center for Assisted Living. The nonprofit organization advocates for the state’s long-term care industry and residents. The effort is part of the chains’ plan to vaccinate residents and workers at long-term care facilities across all 50 states.

COVID-19 has proven especially deadly in the assisted living sector. According to the state Department of Health Services, 27% of the 4,711 people who have died from the disease in Wisconsin were long-term care residents.

“The mood, the feeling is one of great anticipation,” Abrams said of the vaccination effort. “We’re beginning to see the light at the end of the tunnel. When you think about what has been accomplished in less than a year . . . it has been one of the most important public health feats in the history of the world.”

But the campaign won’t be quick. Wisconsin is home to about 60,000 long-term care residents, Abrams said. Not only will they be vaccinated, the chains also hope to inoculate anyone who comes into regular contact with them. That means an undetermined number of nurses, custodians, chefs and other facility employees will be lining up as well, Abrams said.

Walgreens officials have said about 3 million workers serve long-term care residents across the country. Abrams did not have an estimate of how many staffers are employed in Wisconsin.

CVS Health officials said they’ve partnered with about 1,800 facilities to deliver vaccines on-site. Walgreens officials said they didn’t have any specifics on their Wisconsin vaccination efforts, but Abrams said it could be three months before inoculations are complete. Evers’ administration said the program could take about two months.

The DHS reported 1,335 newly confirmed cases of COVID-19 statewide Monday, bringing the total number of infections since March to 472,153.

The disease was a factor in 19 more deaths, pushing the state’s death toll to 4,711. The survival rate still stands at 99%.

Meanwhile, state Rep. Tod Ohnstad, a Kenosha Democrat, announced Monday that he has tested positive for COVID-19 but with only mild symptoms. He said he doesn’t know where or when he was exposed.

“Vaccines have been developed, but we must all remain vigilant until they are widely available and distributed,” Ohnstad said in a statement. “I have worked diligently to follow the guidelines, but if I can get a positive test, you could too. Wear a mask, distance appropriately, wash regularly, stay home if you can, and when in doubt, go and get tested.”

COVID-19 cases in Wisconsin, as of Monday (number in parentheses is increase in the past day):

ALTOONA – Former Altoona superintendent Daniel Peggs is asking a federal judge to amend the conditions of his pretrial release.

The request, filed by Joseph Bugni, an associate federal defender, asks the court to allow Peggs to “seek and maintain employment — subject to the probation department’s approval,” and to live at a probation department-approved residence in the Madison area. The latter portion of the request includes a curfew allowing him to leave his residence between 6 a.m. and 9 p.m.

The filing, dated earlier this month, said Peggs’ probation officer did not object, nor did the assistant U.S. attorney on the case.

“Peggs has been on supervision for ten months,” Bugni wrote. “During that time he has not had even the slightest violation.”

Authorities arrested Peggs in February when he was on his way to his job in Altoona. He was charged with child sex trafficking and making child pornography. Peggs now faces a six count indictment, filed in July, accusing him of recruiting a minor “to engage in sexually explicit conduct” for video recordings, possession of child pornography and receiving child pornography.

Peggs could face life imprisonment if convicted of sexually trafficking the girl. The child pornography charge could involve 15-30 years in prison.

A separate filing from November suggests the case involves a massive amount of digital evidence that both prosecutors and defense attorneys are wading through, and at least some of it came from a North Carolina man charged in a case connected to Peggs’.

Bryan Ragon faces federal charges in North Carolina, though he is accused of trafficking a minor in that state, Wisconsin and other locations in December 2015. That’s the same time as investigators say Peggs used an iPhone to record a minor in a sexually explicit act.

Ragon reached a plea agreement with federal prosecutors in July. He has not yet been sentenced.

The November letter filed by U.S. Attorney Scott Blader and Assistant U.S. Attorney Julie Pfluger said they anticipated “a large amount of digital evidence from the proffer of Bryan Ragon,” and outlined the processes for the defense to review the evidence. The letter said “many terabytes” of information are included in the anticipated evidence.