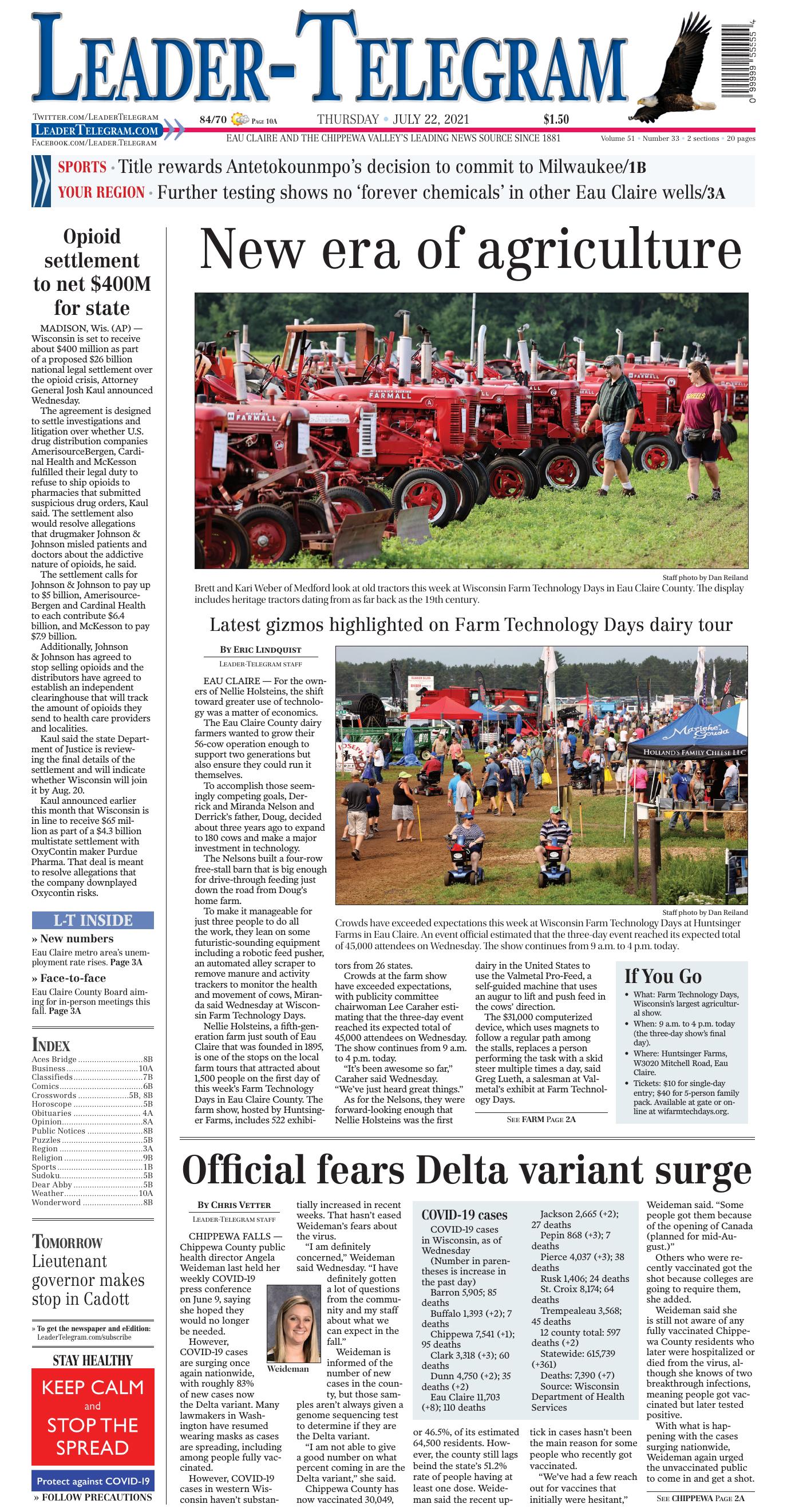 Miranda Nelson is one of three family owners of Nellie Holsteins, an Eau Claire County dairy farm that has invested in technology to cut labor costs and improve production.

Brett and Kari Weber of Medford looked at old tractors at Wisconsin Farm Technology Days in Eau Claire County. The display included heritage tractors dating from as far back as the 19th century.

Crowds have exceeded expectations this week at Wisconsin Farm Technology Days at Huntsinger Farms in Eau Claire. An event official estimated that the three-day event reached its expected total of 45,000 attendees on Wednesday. The show continues from 9 a.m. to 4 p.m. today.

Greg Lueth, a Valmetal salesman at Wisconsin Farm Technology Days just south of Eau Claire, demonstrates a safety device on a robotic feed pusher that can be programmed to travel around a barn and push food toward cows.

EAU CLAIRE — For the owners of Nellie Holsteins, the shift toward greater use of technology was a matter of economics.

The Eau Claire County dairy farmers wanted to grow their 56-cow operation enough to support two generations but also ensure they could run it themselves.

To accomplish those seemingly competing goals, Derrick and Miranda Nelson and Derrick’s father, Doug, decided about three years ago to expand to 180 cows and make a major investment in technology.

The Nelsons built a four-row free-stall barn that is big enough for drive-through feeding just down the road from Doug’s home farm.

To make it manageable for just three people to do all the work, they lean on some futuristic-sounding equipment including a robotic feed pusher, an automated alley scraper to remove manure and activity trackers to monitor the health and movement of cows, Miranda said Wednesday at Wisconsin Farm Technology Days.

Nellie Holsteins, a fifth-generation farm just south of Eau Claire that was founded in 1895, is one of the stops on the local farm tours that attracted about 1,500 people on the first day of this week’s Farm Technology Days in Eau Claire County. The farm show, hosted by Huntsinger Farms, includes 522 exhibitors from 26 states.

Crowds at the farm show have exceeded expectations, with publicity committee chairwoman Lee Caraher estimating that the three-day event reached its expected total of 45,000 attendees on Wednesday. The show continues from 9 a.m. to 4 p.m. today.

As for the Nelsons, they were forward-looking enough that Nellie Holsteins was the first dairy in the United States to use the Valmetal Pro-Feed, a self-guided machine that uses an augur to lift and push feed in the cows’ direction.

The $31,000 computerized device, which uses magnets to follow a regular path among the stalls, replaces a person performing the task with a skid steer multiple times a day, said Greg Lueth, a salesman at Valmetal’s exhibit at Farm Technology Days.

The Nelsons feed the cows only once a day, but the feed pusher ensures the animals have food within reach every two hours. And it doesn’t take the cows long to associate the device with food.

“It draws the cows up to eat, so it helps with production,” Miranda said.

The animals also wear activity collars, which she jokingly calls “Fitbits for cows,” that send the farmers health protection alerts when a cow isn’t eating or moving enough.

“It’s an additional management feature to help us catch a sick cow before there are any physical signs,” Miranda said, adding that the collars also indicate when a cow is in heat before it would be visually detectable.

Not only does the early intervention get animals healthy sooner, but it also improves productivity, she said.

In addition, a self-propelled, programmable alley scraper clears manure from the barn every three to four hours so the Nelsons don’t have to spend time and energy on that undesirable job.

The automation is particularly important at a time when many businesses are struggling to find an adequate supply of workers.

“The whole country’s eyes are opened to the labor shortage now, but there’s always been a labor shortage in ag and I think there always will be,” said Miranda, 25, who has earned bachelor’s and master’s degrees in dairy science. “This way we’re able to maintain our labor force between the three of us.”

Her hope is that putting a spotlight on the technology used at Nellie Holsteins during the tours may help other farm families facing similar challenges and raise awareness about modern agricultural practices among nonfarmers.

“Because we’re so close to the city of Eau Claire, the tours brought a lot of people from the city to showcase agriculture and give them a little bit of an idea of where their food comes from,” Miranda said. “I think it’s good for them to see we’re not the stereotypical type of farmers carrying pitchforks and wearing bib overalls.”

However, COVID-19 cases are surging once again nationwide, with roughly 83% of new cases now the Delta variant. Many lawmakers in Washington have resumed wearing masks as cases are spreading, including among people fully vaccinated.

However, COVID-19 cases in western Wisconsin haven’t substantially increased in recent weeks. That hasn’t eased Weideman’s fears about the virus.

“I am definitely concerned,” Weideman said Wednesday. “I have definitely gotten a lot of questions from the community and my staff about what we can expect in the fall.”

Weideman is informed of the number of new cases in the county, but those samples aren’t always given a genome sequencing test to determine if they are the Delta variant.

“I am not able to give a good number on what percent coming in are the Delta variant,” she said.

Chippewa County has now vaccinated 30,049, or 46.5%, of its estimated 64,500 residents. However, the county still lags beind the state’s 51.2% rate of people having at least one dose. Weideman said the recent uptick in cases hasn’t been the main reason for some people who recently got vaccinated.

“We’ve had a few reach out for vaccines that initially were hesitant,” Weideman said. “Some people got them because of the opening of Canada (planned for mid-August.)”

Others who were recently vaccinated got the shot because colleges are going to require them, she added.

Weideman said she is still not aware of any fully vaccinated Chippewa County residents who later were hospitalized or died from the virus, although she knows of two breakthrough infections, meaning people got vaccinated but later tested positive.

With what is happening with the cases surging nationwide, Weideman again urged the unvaccinated public to come in and get a shot.

“With what we’re seeing with case numbers rising, it is exceedingly important they go get vaccinated,” she said.

Children under age 12 still cannot get vaccinated. As cases rise among younger people, Weideman is hearing more questions about how to keep kids safe, especially with the school year approaching.

“We still meet with our schools every other week,” she said. “All schools in Chippewa County are talking to us and asking our recommendations. They are asking what they can implement.”

Chippewa County remains at a moderate risk level for the virus at this time.

Weideman said her office still takes online vaccination appointments, but they also are inviting the public to walk in and get a shot during their clinic periods.

The agreement is designed to settle investigations and litigation over whether U.S. drug distribution companies AmerisourceBergen, Cardinal Health and McKesson fulfilled their legal duty to refuse to ship opioids to pharmacies that submitted suspicious drug orders, Kaul said. The settlement also would resolve allegations that drugmaker Johnson & Johnson misled patients and doctors about the addictive nature of opioids, he said.

The settlement calls for Johnson & Johnson to pay up to $5 billion, AmerisourceBergen and Cardinal Health to each contribute $6.4 billion, and McKesson to pay $7.9 billion.

Additionally, Johnson & Johnson has agreed to stop selling opioids and the distributors have agreed to establish an independent clearinghouse that will track the amount of opioids they send to health care providers and localities.

Kaul said the state Department of Justice is reviewing the final details of the settlement and will indicate whether Wisconsin will join it by Aug. 20.

Kaul announced earlier this month that Wisconsin is in line to receive $65 million as part of a $4.3 billion multistate settlement with OxyContin maker Purdue Pharma. That deal is meant to resolve allegations that the company downplayed Oxycontin risks.