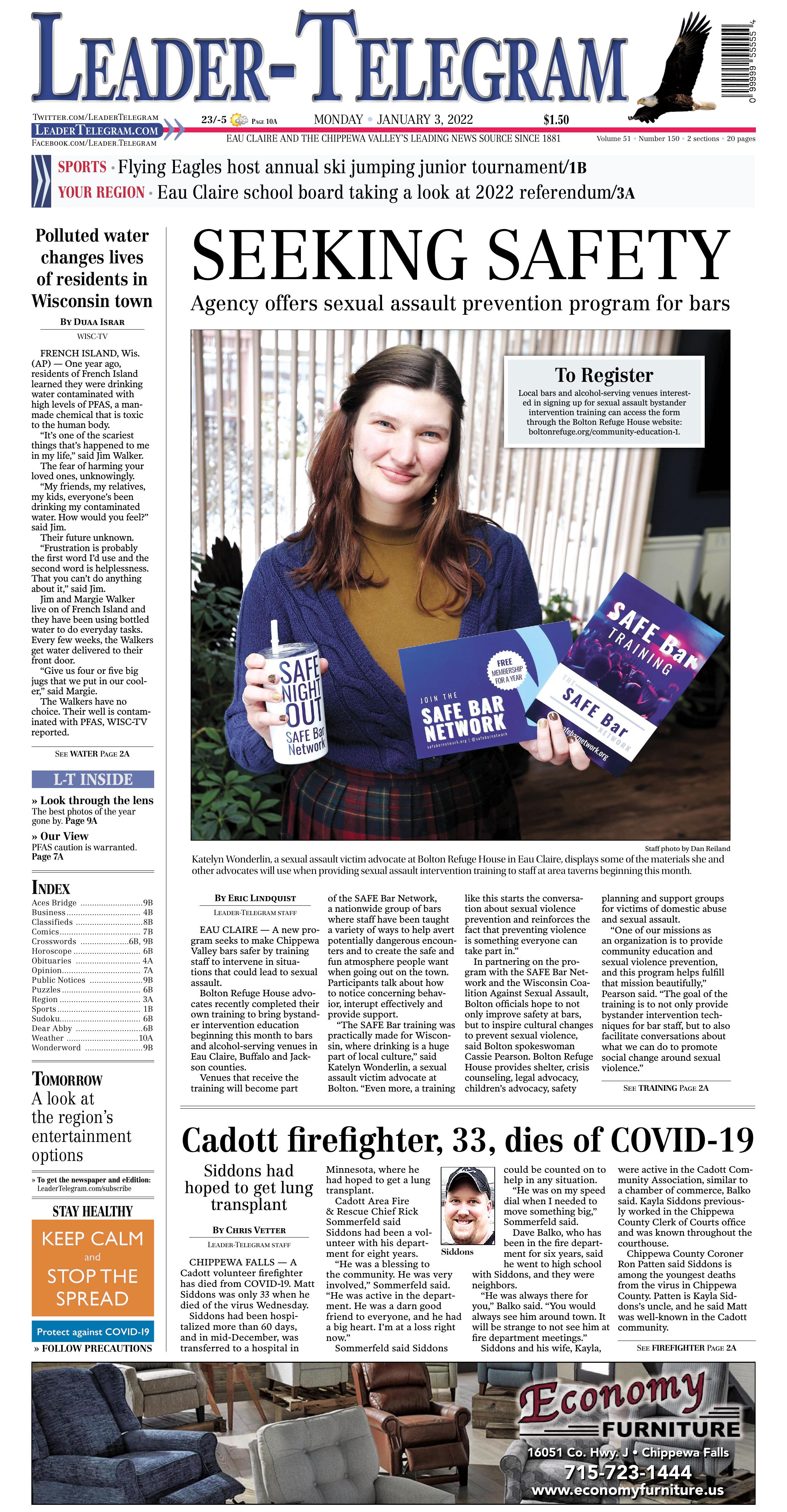 Katelyn Wonderlin, a sexual assault victim advocate at Bolton Refuge House in Eau Claire, displays some of the materials she and other advocates will use when providing sexual assault intervention training to staff at area taverns beginning this month.

EAU CLAIRE — A new program seeks to make Chippewa Valley bars safer by training staff to intervene in situations that could lead to sexual assault.

Venues that receive the training will become part of the SAFE Bar Network, a nationwide group of bars where staff have been taught a variety of ways to help avert potentially dangerous encounters and to create the safe and fun atmosphere people want when going out on the town. Participants talk about how to notice concerning behavior, interrupt effectively and provide support.

“The SAFE Bar training was practically made for Wisconsin, where drinking is a huge part of local culture,” said Katelyn Wonderlin, a sexual assault victim advocate at Bolton. “Even more, a training like this starts the conversation about sexual violence prevention and reinforces the fact that preventing violence is something everyone can take part in.”

“One of our missions as an organization is to provide community education and sexual violence prevention, and this program helps fulfill that mission beautifully,” Pearson said. “The goal of the training is to not only provide bystander intervention techniques for bar staff, but to also facilitate conversations about what we can do to promote social change around sexual violence.”

Among the first local clients to sign up for the program offered by Bolton were the four alcohol-serving venues operated in Eau Claire by Pablo Group: The Lakely, Dive, The Informalist and The FireHouse.

“We want to participate and to make bars and going out a safer experience for everyone,” said Rita Dorsey, director of experiences for Pablo Group, which plans to make the training mandatory for bartenders and optional for other staff.

Dorsey said she is aware of similar programs that have been offered across the country for years and was excited to see the training become available in Eau Claire.

“Our No. 1 goal is obviously just the safety of our patrons,” Dorsey said, adding that she believes people could be more comfortable going to establishments where they know the staff has been trained to look out for the safety of customers.

Participating venues can obtain window stickers indicating they are part of the SAFE Bar Network.

The nonprofit network, founded in 2016, has more than 25 members nationwide, including two so far in Wisconsin, said Haleigh Harrold, executive director.

By the end of February, plans call for network partners in Wisconsin to train at least 22 venues across the state. The Bridge to Hope in Menomonie is another regional agency expected to offer the training.

The training takes direct aim at sexual violence, a problem that experts say is vastly underreported. A Wisconsin Coalition Against Sexual Assault report indicates that 20% of Wisconsin women are survivors of rape, that 87% of those survivors knew their perpetrator and that one in three women and one in six men have experienced sexual violence in their lifetime.

Pearson said sexual assault prevention previously has been approached in a victim-blaming sort of way, making it the sole responsibility of the individual to be vigilant and protect themselves.

“This training is different because its approach is much more community-focused, bringing attention to what venues and individuals can do to make the environment safer for all,” Pearson said. “Long term, the goal is that our community becomes safer for everyone — that both patrons and staff feel comfortable at community venues and have the tools needed to keep those around them safe.”

Wonderlin said she especially likes the program’s participatory approach to training in which bar staff talk about situations they’ve observed and that are typical of the venue where they work. That enables presenters to focus on real-life scenarios, which might vary significantly from a college bar to a cocktail lounge to a nightclub, as they discuss potential danger signs, approaches that have worked in the past and techniques that might help in the future.

While a common perception is that intervention must involve a person asserting themselves into a situation by aggressively confronting a potential perpetrator, that approach may lead to escalation and is “not in the wheelhouse” of many people, Wonderlin said. The SAFE Bar training, by contrast, seeks to come up with alternative strategies that could work for everybody.

That may include using humor to diffuse a situation, asking a potential victim’s friends if that person is doing OK, calling a person up to the bar to check on them, ensuring that someone isn’t being pressured to drink more alcohol than they want or establishing a policy that abandoned drinks can be discarded to limit the opportunity for someone to mess with them by adding extra shots or a date rape drug.

Such steps send a signal to customers that someone is looking out for them and to would-be perpetrators that they are being watched, Wonderlin said.

“The strategies are built for what individuals are comfortable with and by the people who will use them,” she said. “Doing something is better than doing nothing.”

Local bars and alcohol-serving venues interested in signing up for sexual assault bystander intervention training can access the form through the Bolton Refuge House website: boltonrefuge.org/community-education-1.

CHIPPEWA FALLS — A Cadott volunteer firefighter has died from COVID-19. Matt Siddons was only 33 when he died of the virus Wednesday.

Siddons had been hospitalized more than 60 days, and in mid-December, was transferred to a hospital in Minnesota, where he had hoped to get a lung transplant.

Cadott Area Fire & Rescue Chief Rick Sommerfeld said Siddons had been a volunteer with his department for eight years.

“He was a blessing to the community. He was very involved,” Sommerfeld said. “He was active in the department. He was a darn good friend to everyone, and he had a big heart. I’m at a loss right now.”

Sommerfeld said Siddons could be counted on to help in any situation.

“He was on my speed dial when I needed to move something big,” Sommerfeld said.

Dave Balko, who has been in the fire department for six years, said he went to high school with Siddons, and they were neighbors.

“He was always there for you,” Balko said. “You would always see him around town. It will be strange to not see him at fire department meetings.”

Siddons and his wife, Kayla, were active in the Cadott Community Association, similar to a chamber of commerce, Balko said. Kayla Siddons previously worked in the Chippewa County Clerk of Courts office and was known throughout the courthouse.

Chippewa County Coroner Ron Patten said Siddons is among the youngest deaths from the virus in Chippewa County. Patten is Kayla Siddons’s uncle, and he said Matt was well-known in the Cadott community.

“It’s pretty sad,” Patten said. “He had been fighting complications of COVID for a couple of months.”

“My perfectly healthy, never quits going, never gets sick 33-year-old husband is in a very vulnerable state that I just don’t have answers to,” Kayla Siddons posted on her Facebook account in early November. “He is intubated, sedated and on a ventilator.”

“We were always told to expect some scarring. However we’ve learned his lungs are badly damaged and has a lot of scarring which is preventing him from being on less oxygen,” she wrote. “He has also developed cysts throughout the entire lung which they’ve never seen before.”

Balko said each time he read an update on Siddons’ condition, he could see it was getting worse. However, Matt remained upbeat in his Facebook posts.

The state’s Department of Heath Services announced 30 more virus-related deaths on Thursday including six from western Wisconsin: two from Chippewa County and one each from Barron, Dunn, Eau Claire and St. Croix counties.

The United State’s seven-day average of hospitalizations is 76,776, up 11% in the past week, according to Johns Hopkins University.

COVID-19 cases in Wisconsin, as of Thursday

(Number in parenthesis is increase over the past day)

FRENCH ISLAND, Wis. (AP) — One year ago, residents of French Island learned they were drinking water contaminated with high levels of PFAS, a man-made chemical that is toxic to the human body.

“It’s one of the scariest things that’s happened to me in my life,” said Jim Walker.

The fear of harming your loved ones, unknowingly.

“My friends, my relatives, my kids, everyone’s been drinking my contaminated water. How would you feel?” said Jim.

“Frustration is probably the first word I’d use and the second word is helplessness. That you can’t do anything about it,” said Jim.

Jim and Margie Walker live on of French Island and they have been using bottled water to do everyday tasks. Every few weeks, the Walkers get water delivered to their front door.

“Give us four or five big jugs that we put in our cooler,” said Margie.

The Walkers have no choice. Their well is contaminated with PFAS, WISC-TV reported.

“This is probably one of the worst things that’s happened to us in so many ways,” said Jim.

PFAS is what’s called a forever chemical. It does not break down and can’t be removed using traditional water filtration methods.

“I tried to filter it out myself down here with a couple filters and other stuff but it didn’t work,” said Jim.

The chemical is often found in firefighting foam – like what’s used at the La Crosse Regional Airport.

“And what happened was all that stuff, the foam and everything came right through here so we were right in its path,” said Margie.

One year later, Jim says he still finds himself reaching for the faucet.

“You get thirsty for a glass of water, you go over, you start going over to the faucet, nope go back to the cooler. I still do that. After this long,” said Jim.

Margie says they’ve had to adapt to using bottled water to brush their teeth, cook, and even garden.

And they live not knowing the damage the contaminated water has done.

“But when it comes right down to it the main thing is, what effect does that water have on us, we don’t know,” said Jim.

For the Walkers, the water contamination is stopping them from selling their home and retiring.

“It’s like losing half of your retirement,” said Jim.

And they don’t believe they will ever leave.

“You just wait for somebody to give you a text or a call or email saying “guess what, we finally got this thing figured out,” said Jim.

Jim and Margie say their roots are in La Crosse and French Island and while they hope the water contamination will be solved soon for everyone, Jim believes it may not happen in his lifetime.