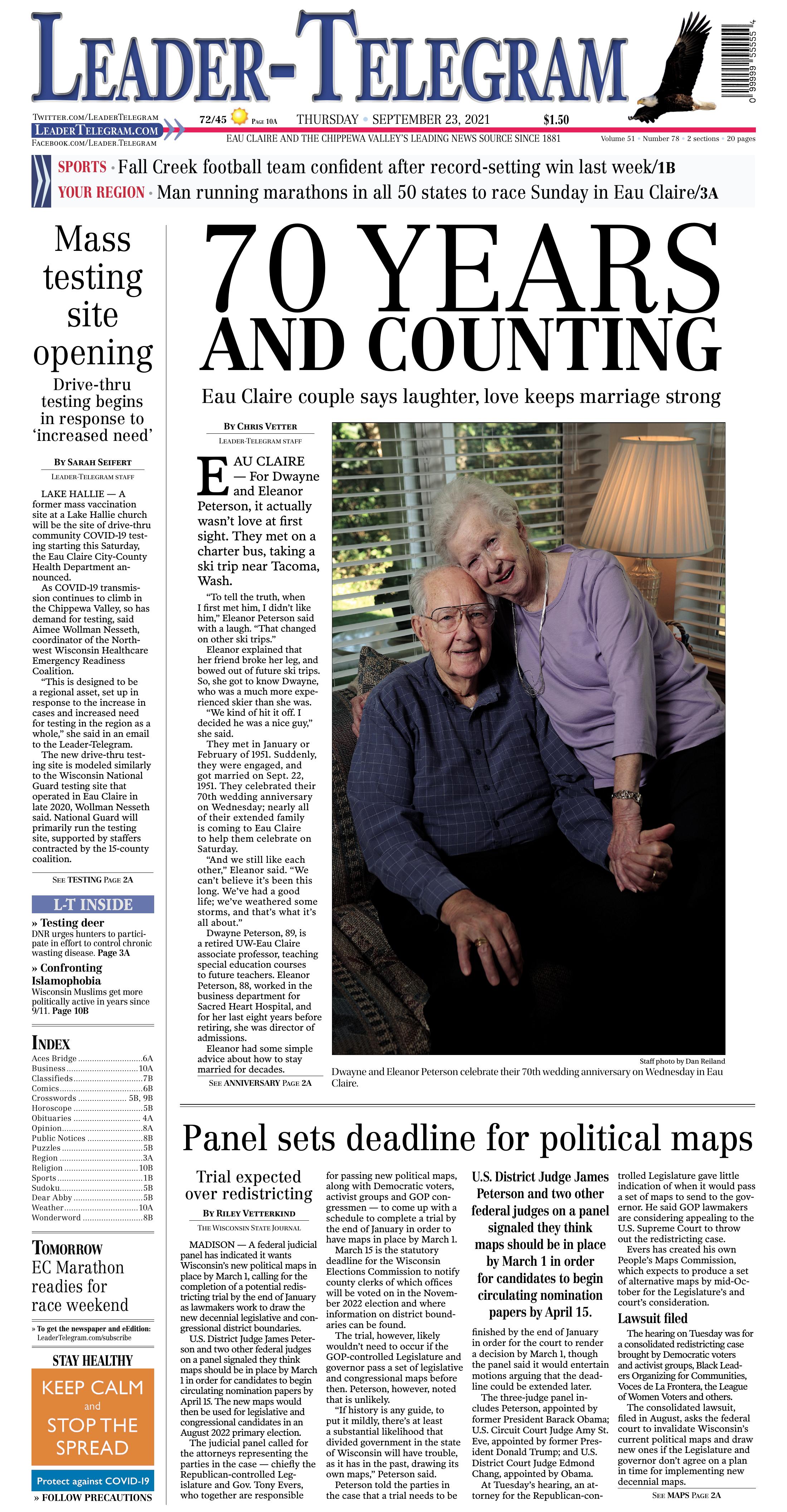 EAU CLAIRE — For Dwayne and Eleanor Peterson, it actually wasn’t love at first sight. They met on a charter bus, taking a ski trip near Tacoma, Wash.

“To tell the truth, when I first met him, I didn’t like him,” Eleanor Peterson said with a laugh. “That changed on other ski trips.”

Eleanor explained that her friend broke her leg, and bowed out of future ski trips. So, she got to know Dwayne, who was a much more experienced skier than she was.

They met in January or February of 1951. Suddenly, they were engaged, and got married on Sept. 22, 1951. They celebrated their 70th wedding anniversary on Wednesday; nearly all of their extended family is coming to Eau Claire to help them celebrate on Saturday.

“And we still like each other,” Eleanor said. “We can’t believe it’s been this long. We’ve had a good life; we’ve weathered some storms, and that’s what it’s all about.”

Dwayne Peterson, 89, is a retired UW-Eau Claire associate professor, teaching special education courses to future teachers. Eleanor Peterson, 88, worked in the business department for Sacred Heart Hospital, and for her last eight years before retiring, she was director of admissions.

Eleanor had some simple advice about how to stay married for decades.

They also still enjoy doing things together as a couple.

“We just enjoy life,” she said. “We enjoy being together, and the simple things. We like to go to parades; we used to bowl. And we enjoy family — they are very important to us.”

The Petersons have four children and four great-grandchildren.

Eleanor said their eldest child was born with cerebral palsy, and she changed their life on numerous levels.

“It was a catalyst for what we do,” she said. “My husband went into that field. She has been a joy to us. We feel we have been directed in the choices we have done, and being advocates for people with disabilities.”

While they met in the state of Washington, they moved several times for Dwayne’s job, with stints at colleges in San Francisco, Colorado, Utah and Indiana, before they moved to Eau Claire in 1975. Dwayne Peterson taught for 19 years here before retiring in 1975.

“This is the longest place we stayed,” she said.

Many of their family members live locally, but some from outside the Midwest are coming to a large gathering on Saturday to help them celebrate their 70 years together.

When the pandemic began, they decided it was time to downsize. They sold their home in town and moved into Oakwood Hills independent living retirement community. They both still drive, but they’ve now made new friends, spending much of the day playing bridge and enjoying camaraderie with their neighbors.

MADISON — A federal judicial panel has indicated it wants Wisconsin’s new political maps in place by March 1, calling for the completion of a potential redistricting trial by the end of January as lawmakers work to draw the new decennial legislative and congressional district boundaries.

U.S. District Judge James Peterson and two other federal judges on a panel signaled they think maps should be in place by March 1 in order for candidates to begin circulating nomination papers by April 15. The new maps would then be used for legislative and congressional candidates in an August 2022 primary election.

The judicial panel called for the attorneys representing the parties in the case — chiefly the Republican-controlled Legislature and Gov. Tony Evers, who together are responsible for passing new political maps, along with Democratic voters, activist groups and GOP congressmen — to come up with a schedule to complete a trial by the end of January in order to have maps in place by March 1.

March 15 is the statutory deadline for the Wisconsin Elections Commission to notify county clerks of which offices will be voted on in the November 2022 election and where information on district boundaries can be found.

The trial, however, likely wouldn’t need to occur if the GOP-controlled Legislature and governor pass a set of legislative and congressional maps before then. Peterson, however, noted that is unlikely.

“If history is any guide, to put it mildly, there’s at least a substantial likelihood that divided government in the state of Wisconsin will have trouble, as it has in the past, drawing its own maps,” Peterson said.

Peterson told the parties in the case that a trial needs to be finished by the end of January in order for the court to render a decision by March 1, though the panel said it would entertain motions arguing that the deadline could be extended later.

At Tuesday’s hearing, an attorney for the Republican-controlled Legislature gave little indication of when it would pass a set of maps to send to the governor. He said GOP lawmakers are considering appealing to the U.S. Supreme Court to throw out the redistricting case.

Evers has created his own People’s Maps Commission, which expects to produce a set of alternative maps by mid-October for the Legislature’s and court’s consideration.

The hearing on Tuesday was for a consolidated redistricting case brought by Democratic voters and activist groups, Black Leaders Organizing for Communities, Voces de La Frontera, the League of Women Voters and others.

The consolidated lawsuit, filed in August, asks the federal court to invalidate Wisconsin’s current political maps and draw new ones if the Legislature and governor don’t agree on a plan in time for implementing new decennial maps.

The case was filed a day after the U.S. Census Bureau released the detailed population information that will aid lawmakers in drawing Wisconsin’s next decennial legislative and congressional districts.

Specifically, the lawsuit contends that Wisconsin’s Assembly, Senate and congressional districts are in violation of the U.S. Constitution’s one-person, one-vote principle due to population shifts that have occurred in Wisconsin over the past 10 years. Because of those shifts, districts no longer have the same number of people living in them, a requirement under the law.

The lawsuit came at the earliest possible time because lawmakers weren’t able to draw districts until the release of the census data, which was delayed four months due to the COVID-19 pandemic. It typically takes months after the release of the data for the Legislature to pass a set of political maps, which the governor would then need to sign or veto.

Plaintiffs contend that, because the Legislature is controlled by Republicans and the governor is a Democrat, the chances of a set of maps passing are slim.

Christopher Ford, chair of Evers’ People’s Maps Commission, which Evers said he created to provide more transparency and fairness in the map-drawing process — said commissioners have been working diligently during the past month to produce by Sept. 30 an initial set of state Assembly, Senate and congressional maps for public review. Once public input is received, the commission plans to produce final maps by mid-October.

Evers created the commission by executive order, and members do not include lawmakers, lobbyists or party officials. Wisconsin law doesn’t give the commission an official role in the redistricting process, but Evers and advocates want it to present a less partisan set of maps for consideration by the Legislature and possibly the courts.

The Legislature has invited the People’s Maps Commission, as well as members of the public, to submit proposed maps by Oct. 15 for consideration.

Wisconsin’s current political maps give a strong advantage to Republicans, who also benefit from some geographic advantages.

As COVID-19 transmission continues to climb in the Chippewa Valley, so has demand for testing, said Aimee Wollman Nesseth, coordinator of the Northwest Wisconsin Healthcare Emergency Readiness Coalition.

“This is designed to be a regional asset, set up in response to the increase in cases and increased need for testing in the region as a whole,” she said in an email to the Leader-Telegram.

The site will stay open for testing after Oct. 2, but its future hours have not yet been posted. Wollman Nesseth said she anticipates the drive-thru site will be open more days per week after Oct. 2.

When the new hours of operation are announced, they will be posted on the Health Department’s website, bit.ly/SymptomsTesting.

Tests will be free, though people under 18 will need a parent present. People should pre-register on the day they plan to get tested by visiting register.covidconnect.wi.gov. If someone does not have internet access, staff will help them register when they arrive at the site.

An average of 56 Eau Claire County residents are newly testing positive for COVID-19 per day, according to Health Department figures — the same case burden the county was seeing in early December 2020.

Who should be tested right now

Here’s who the Health Department says should get a COVID-19 test:

• Anyone one year or older who has any symptoms of COVID-19, including a sore throat, congestion, runny nose, fever, chills, cough, shortness of breath, difficulty breathing, fatigue, muscle or body aches, headache, nausea, vomiting, diarrhea or new loss of taste or smell.

• Anyone one year or older who thinks they may have been exposed to COVID-19 or is told they’re a close contact to someone who tested positive, even if they feel healthy. Vaccinated people should get tested three days after they’ve been exposed to COVID-19 or longer. Unvaccinated people should get tested on day six or later, the Health Department said.

After testing, people who are ill should stay home and avoid contact with others as much as possible until they get their results, the Health Department said.

For more information about the new testing site, the Health Department can be reached at 715-839-4718.