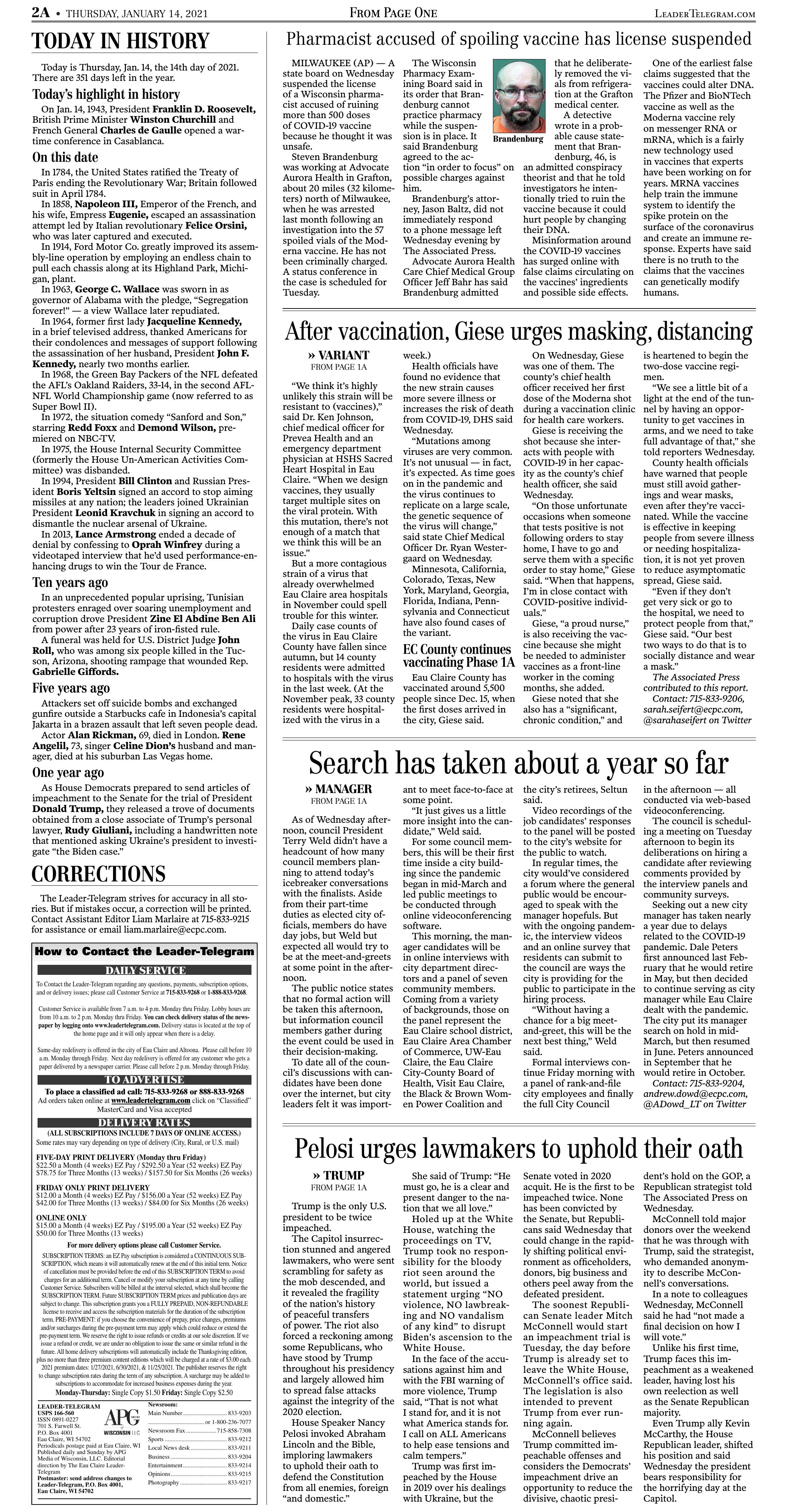 In this booking photo provided by the Ozaukee County Sheriff's Office Monday, Jan. 4, 2021 in Port Washington, Wis. Steven Brandenburg is shown. The Wisconsin pharmacist, accused of intentionally spoiling hundreds of doses of coronavirus vaccine, convinced the world was "crashing down" told police he tried to ruin hundreds of doses of coronavirus vaccine because he felt the shots would mutate people's DNA, according to court documents released Monday.

MILWAUKEE (AP) — A state board on Wednesday suspended the license of a Wisconsin pharmacist accused of ruining more than 500 doses of COVID-19 vaccine because he thought it was unsafe.

Steven Brandenburg was working at Advocate Aurora Health in Grafton, about 20 miles (32 kilometers) north of Milwaukee, when he was arrested last month following an investigation into the 57 spoiled vials of the Moderna vaccine. He has not been criminally charged. A status conference in the case is scheduled for Tuesday.

The Wisconsin Pharmacy Examining Board said in its order that Brandenburg cannot practice pharmacy while the suspension is in place. It said Brandenburg agreed to the action “in order to focus” on possible charges against him.

Brandenburg’s attorney, Jason Baltz, did not immediately respond to a phone message left Wednesday evening by The Associated Press.

A detective wrote in a probable cause statement that Brandenburg, 46, is an admitted conspiracy theorist and that he told investigators he intentionally tried to ruin the vaccine because it could hurt people by changing their DNA.

Misinformation around the COVID-19 vaccines has surged online with false claims circulating on the vaccines’ ingredients and possible side effects.

One of the earliest false claims suggested that the vaccines could alter DNA. The Pfizer and BioNTech vaccine as well as the Moderna vaccine rely on messenger RNA or mRNA, which is a fairly new technology used in vaccines that experts have been working on for years. MRNA vaccines help train the immune system to identify the spike protein on the surface of the coronavirus and create an immune response. Experts have said there is no truth to the claims that the vaccines can genetically modify humans.

In 1784, the United States ratified the Treaty of Paris ending the Revolutionary War; Britain followed suit in April 1784.

In 1858, Napoleon III, Emperor of the French, and his wife, Empress Eugenie, escaped an assassination attempt led by Italian revolutionary Felice Orsini, who was later captured and executed.

In 1914, Ford Motor Co. greatly improved its assembly-line operation by employing an endless chain to pull each chassis along at its Highland Park, Michigan, plant.

In 1963, George C. Wallace was sworn in as governor of Alabama with the pledge, “Segregation forever!” — a view Wallace later repudiated.

In 1968, the Green Bay Packers of the NFL defeated the AFL’s Oakland Raiders, 33-14, in the second AFL-NFL World Championship game (now referred to as Super Bowl II).

In 1972, the situation comedy “Sanford and Son,” starring Redd Foxx and Demond Wilson, premiered on NBC-TV.

In 2013, Lance Armstrong ended a decade of denial by confessing to Oprah Winfrey during a videotaped interview that he’d used performance-enhancing drugs to win the Tour de France.

A funeral was held for U.S. District Judge John Roll, who was among six people killed in the Tucson, Arizona, shooting rampage that wounded Rep. Gabrielle Giffords.

Attackers set off suicide bombs and exchanged gunfire outside a Starbucks cafe in Indonesia’s capital Jakarta in a brazen assault that left seven people dead.

As House Democrats prepared to send articles of impeachment to the Senate for the trial of President Donald Trump, they released a trove of documents obtained from a close associate of Trump’s personal lawyer, Rudy Giuliani, including a handwritten note that mentioned asking Ukraine’s president to investigate “the Biden case.”