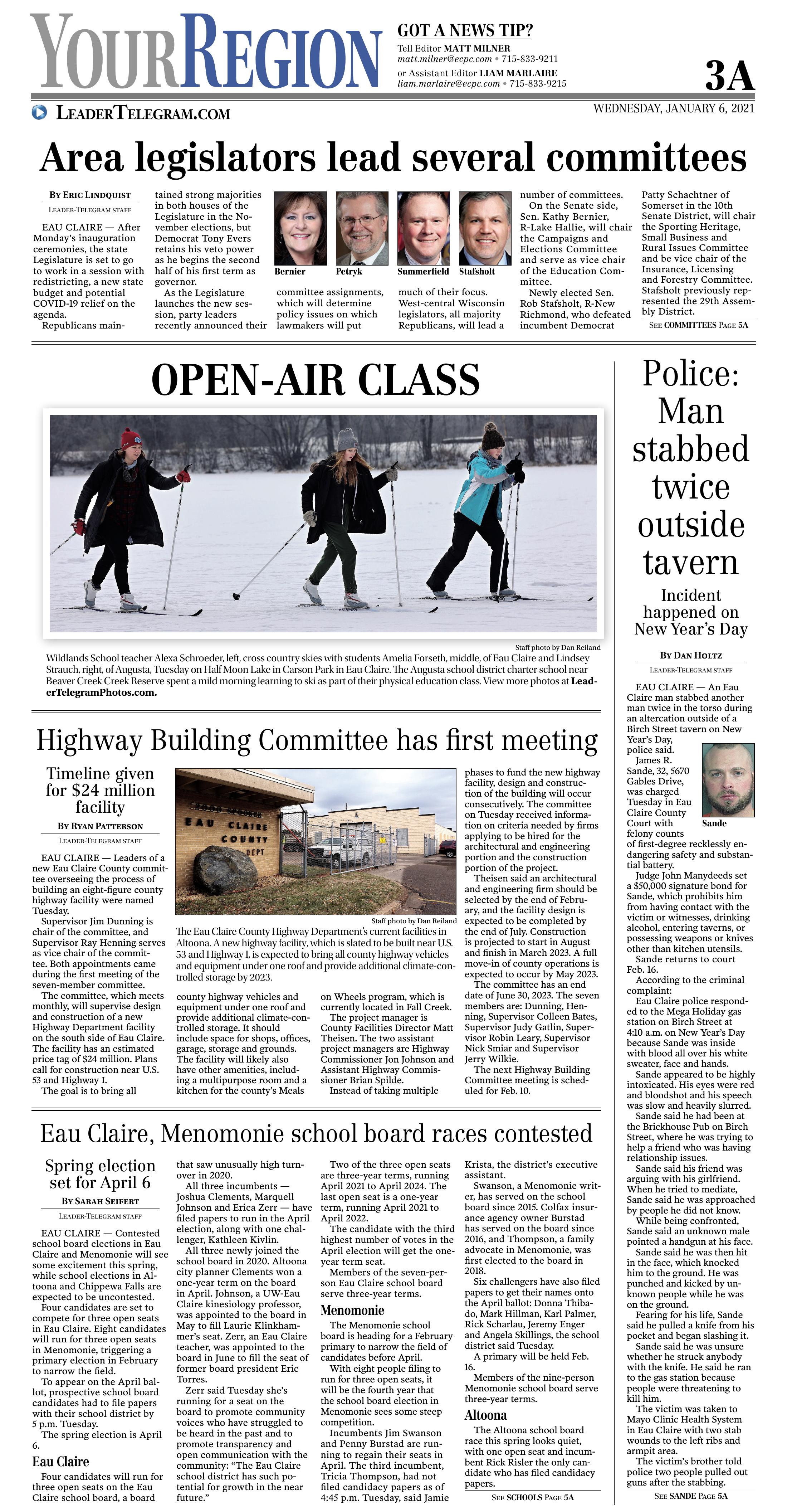 A view inside the Capitol dome in Madison.

EAU CLAIRE — After Monday’s inauguration ceremonies, the state Legislature is set to go to work in a session with redistricting, a new state budget and potential COVID-19 relief on the agenda.

Republicans maintained strong majorities in both houses of the Legislature in the November elections, but Democrat Tony Evers retains his veto power as he begins the second half of his first term as governor.

As the Legislature launches the new session, party leaders recently announced their committee assignments, which will determine policy issues on which lawmakers will put much of their focus. West-central Wisconsin legislators, all majority Republicans, will lead a number of committees.

On the Senate side, Sen. Kathy Bernier, R-Lake Hallie, will chair the Campaigns and Elections Committee and serve as vice chair of the Education Committee.

In the Assembly, chairmanships will be held by Reps. Rob Summerfield of Bloomer on the Science, Technology and Broadband Committee; Warren Petryk of the town of Washington on the Workforce Development Committee; Jesse James of Altoona on the Substance Abuse and Prevention Committee; Treig Pronschinske of Mondovi on the Sporting Heritage Committee; and James Edming of Glen Flora on the Labor and Integrated Employment Committee.

Serving as vice chairs will be Reps. David Armstrong of Rice Lake on the Jobs and the Economy Committee; Clint Moses of Menomonie on the Rural Development Committee; Summerfield on the Health Committee; James on the Family Law Committee; and Petryk on the Aging and Long-Term Care Committee.

Bernier and Rep. Shannon Zimmerman, R-River Falls, have been named to the powerful Joint Finance Committee, which will be at the heart of 2021-23 state budget negotiations.

West-central Wisconsin legislators are assigned to these committees in the current session and have the following contact information:

The Eau Claire County Highway Department’s current facilities in Altoona. A new highway facility, which is slated to be built near U.S. 53 and Highway I, is expected to bring all county highway vehicles and equipment under one roof and provide additional climate-controlled storage by 2023.

The committee, which meets monthly, will supervise design and construction of a new Highway Department facility on the south side of Eau Claire. The facility has an estimated price tag of $24 million. Plans call for construction near U.S. 53 and Highway I.

The goal is to bring all county highway vehicles and equipment under one roof and provide additional climate-controlled storage. It should include space for shops, offices, garage, storage and grounds. The facility will likely also have other amenities, including a multipurpose room and a kitchen for the county’s Meals on Wheels program, which is currently located in Fall Creek.

Instead of taking multiple phases to fund the new highway facility, design and construction of the building will occur consecutively. The committee on Tuesday received information on criteria needed by firms applying to be hired for the architectural and engineering portion and the construction portion of the project.

The next Highway Building Committee meeting is scheduled for Feb. 10.

EAU CLAIRE — Contested school board elections in Eau Claire and Menomonie will see some excitement this spring, while school elections in Altoona and Chippewa Falls are expected to be uncontested.

To appear on the April ballot, prospective school board candidates had to file papers with their school district by 5 p.m. Tuesday.

The spring election is April 6.

Four candidates will run for three open seats on the Eau Claire school board, a board that saw unusually high turnover in 2020.

All three incumbents — Joshua Clements, Marquell Johnson and Erica Zerr — have filed papers to run in the April election, along with one challenger, Kathleen Kivlin.

Zerr said Tuesday she’s running for a seat on the board to promote community voices who have struggled to be heard in the past and to promote transparency and open communication with the community: “The Eau Claire school district has such potential for growth in the near future.”

The candidate with the third highest number of votes in the April election will get the one-year term seat.

The Menomonie school board is heading for a February primary to narrow the field of candidates before April.

With eight people filing to run for three open seats, it will be the fourth year that the school board election in Menomonie sees some steep competition.

Incumbents Jim Swanson and Penny Burstad are running to regain their seats in April. The third incumbent, Tricia Thompson, had not filed candidacy papers as of 4:45 p.m. Tuesday, said Jamie Krista, the district’s executive assistant.

Members of the nine-person Menomonie school board serve three-year terms.

The Altoona school board race this spring looks quiet, with one open seat and incumbent Rick Risler the only candidate who has filed candidacy papers.

Risler is seeking a second term, having first won the seat in 2018.

No other candidates had filed papers to run for the board as of Tuesday afternoon, said Lisa Boss, the district’s executive assistant.

Members of the five-person Altoona school board serve three-year terms.

There will be no contested races on the Chippewa Falls school board; three candidates have filed to fill three open seats.

However, the top two vote-getters will each serve a three-year term, while the person finishing third will serve just a one-year term, and would have to run again in 2022.

The three incumbents — Steve Olson, Sharon McIlquham and Sherry Jasper — all filed for reelection and completed their paperwork.

However, Jasper was appointed to replace Jennifer Heinz, who stepped down from the board last year. That has created the wrinkle in this election; the person who finishes third is finishing the final one year of Heinz’ term.

No challengers had filed candidacy papers to run for the board as of Tuesday afternoon.

EAU CLAIRE — An Eau Claire man stabbed another man twice in the torso during an altercation outside of a Birch Street tavern on New Year’s Day, police said.

Judge John Manydeeds set a $50,000 signature bond for Sande, which prohibits him from having contact with the victim or witnesses, drinking alcohol, entering taverns, or possessing weapons or knives other than kitchen utensils.

Eau Claire police responded to the Mega Holiday gas station on Birch Street at 4:10 a.m. on New Year’s Day because Sande was inside with blood all over his white sweater, face and hands.

Sande appeared to be highly intoxicated. His eyes were red and bloodshot and his speech was slow and heavily slurred.

Sande said he had been at the Brickhouse Pub on Birch Street, where he was trying to help a friend who was having relationship issues.

Sande said his friend was arguing with his girlfriend. When he tried to mediate, Sande said he was approached by people he did not know.

While being confronted, Sande said an unknown male pointed a handgun at his face.

Sande said he was then hit in the face, which knocked him to the ground. He was punched and kicked by unknown people while he was on the ground.

Fearing for his life, Sande said he pulled a knife from his pocket and began slashing it.

Sande said he was unsure whether he struck anybody with the knife. He said he ran to the gas station because people were threatening to kill him.

The victim was taken to Mayo Clinic Health System in Eau Claire with two stab wounds to the left ribs and armpit area.

The victim’s brother told police two people pulled out guns after the stabbing.

The brother refused to say who had guns but were adamant they were not displayed until after the stabbing.

Police interviewed the victim at the hospital. He said he was drunk and outside the Brickhouse Pub smoking a cigarette in the parking lot.

The victim said there was a large crowd outside and he heard someone calling his name and asking for help breaking up a fight.

The victim said his friend was in a fight with another man, so he pushed that man away from his friend.

The victim said the man then lunged at him and stabbed him under his arm.

The victim said he did not know the name of the man who stabbed him.

After he was injured, the victim said he realized he was bleeding heavily and got a ride to the hospital.

If convicted of the charges, Sande could be sentenced to up to nine years in prison.