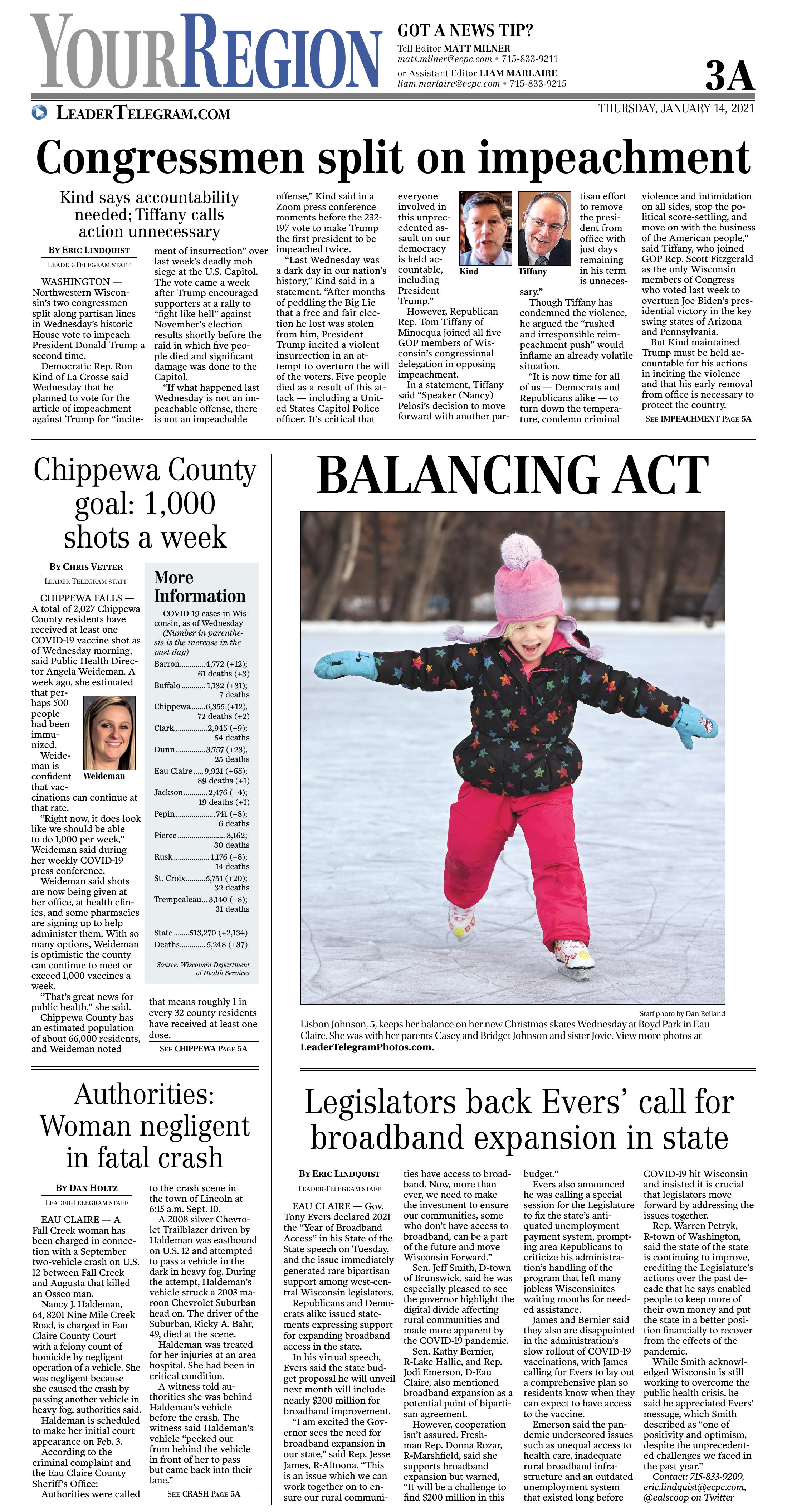 Democratic Rep. Ron Kind of La Crosse said Wednesday that he planned to vote for the article of impeachment against Trump for “incitement of insurrection” over last week’s deadly mob siege at the U.S. Capitol. The vote came a week after Trump encouraged supporters at a rally to “fight like hell” against November’s election results shortly before the raid in which five people died and significant damage was done to the Capitol.

“Last Wednesday was a dark day in our nation’s history,” Kind said in a statement. “After months of peddling the Big Lie that a free and fair election he lost was stolen from him, President Trump incited a violent insurrection in an attempt to overturn the will of the voters. Five people died as a result of this attack — including a United States Capitol Police officer. It’s critical that everyone involved in this unprecedented assault on our democracy is held accountable, including President Trump.”

In a statement, Tiffany said “Speaker (Nancy) Pelosi’s decision to move forward with another partisan effort to remove the president from office with just days remaining in his term is unnecessary.”

Though Tiffany has condemned the violence, he argued the “rushed and irresponsible reimpeachment push” would inflame an already volatile situation.

“It is now time for all of us — Democrats and Republicans alike — to turn down the temperature, condemn criminal violence and intimidation on all sides, stop the political score-settling, and move on with the business of the American people,” said Tiffany, who joined GOP Rep. Scott Fitzgerald as the only Wisconsin members of Congress who voted last week to overturn Joe Biden’s presidential victory in the key swing states of Arizona and Pennsylvania.

But Kind maintained Trump must be held accountable for his actions in inciting the violence and that his early removal from office is necessary to protect the country.

“I believe the president still presents a clear and present danger to the safety of our country, not just based on the conduct of last week that led to the mob and insurrection on our nation’s Capitol, but even his comments (Tuesday) where he claimed that all his remarks were perfectly appropriate,” Kind said.

Kind noted that Trump still hasn’t apologized for his role in the storming of the Capitol and that he continues to be commander in chief of the world’s most powerful military and have influence over millions of Americans. Kind called Trump “still a very dangerous person.”

Trump has taken no responsibility for the riot, suggesting it was the drive to oust him rather than his actions around the storming of the Capitol that was dividing the country.

Acknowledging that he initially had reservations about a rushed impeachment, Kind said that’s why he first called for Trump to resign and voted Tuesday to encourage Vice President Mike Pence and the Cabinet to invoke the 25th Amendment to remove Trump from office.

When neither of those things happened, Kind said he backed impeachment to hold the president responsible for his actions.

In his morning run Wednesday around the National Mall in Washington, Kind said he was saddened to see so many military troops stationed in the area along with a multitude of barricades and walls that have gone up in the past week.

“It seems like our capital is under siege,” Kind said. “(Trump) is getting his goal of building a big, beautiful wall. Unfortunately, that wall is surrounding the United States Capitol.”

No congressional Republicans backed impeaching Trump during his 2019 impeachment vote, and only 10 sided with Democrats in Wednesday’s vote.

Tiffany said during House debate that he hoped President-elect Biden would call off the impeachment effort, which Tiffany said would “rub salt in the wounds for millions of Americans.”

While Kind said he looks forward to a new era of integrity and healing once Biden is inaugurated next Wednesday, Kind insisted it would be hard to begin reconciliation without accountability for the Capitol raid. 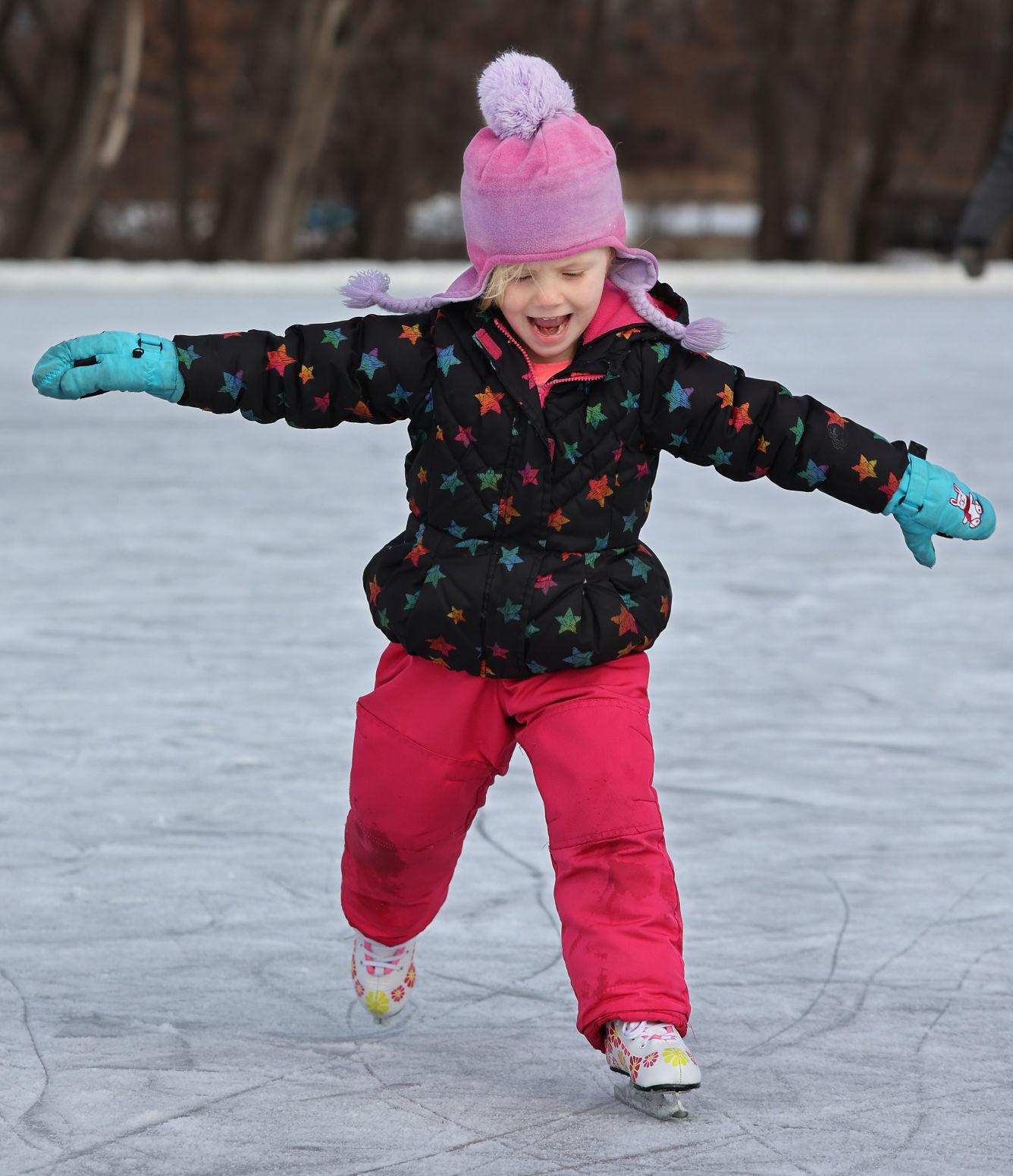 Lisbon Johnson, 5, keeps her balance on her new Christmas skates Wednesday at Boyd Park in Eau Claire. She was with her parents Casey and Bridget Johnson and sister Jovie. View more photos at LeaderTelegramPhotos.com.

EAU CLAIRE — Gov. Tony Evers declared 2021 the “Year of Broadband Access” in his State of the State speech on Tuesday, and the issue immediately generated rare bipartisan support among west-central Wisconsin legislators.

In his virtual speech, Evers said the state budget proposal he will unveil next month will include nearly $200 million for broadband improvement.

Sen. Jeff Smith, D-town of Brunswick, said he was especially pleased to see the governor highlight the digital divide affecting rural communities and made more apparent by the COVID-19 pandemic.

However, cooperation isn’t assured. Freshman Rep. Donna Rozar, R-Marshfield, said she supports broadband expansion but warned, “It will be a challenge to find $200 million in this budget.”

Evers also announced he was calling a special session for the Legislature to fix the state’s antiquated unemployment payment system, prompting area Republicans to criticize his administration’s handling of the program that left many jobless Wisconsinites waiting months for needed assistance.

James and Bernier said they also are disappointed in the administration’s slow rollout of COVID-19 vaccinations, with James calling for Evers to lay out a comprehensive plan so residents know when they can expect to have access to the vaccine.

Emerson said the pandemic underscored issues such as unequal access to health care, inadequate rural broadband infrastructure and an outdated unemployment system that existed long before COVID-19 hit Wisconsin and insisted it is crucial that legislators move forward by addressing the issues together.

Rep. Warren Petryk, R-town of Washington, said the state of the state is continuing to improve, crediting the Legislature’s actions over the past decade that he says enabled people to keep more of their own money and put the state in a better position financially to recover from the effects of the pandemic.

While Smith acknowledged Wisconsin is still working to overcome the public health crisis, he said he appreciated Evers’ message, which Smith described as “one of positivity and optimism, despite the unprecedented challenges we faced in the past year.”

CHIPPEWA FALLS — A total of 2,027 Chippewa County residents have received at least one COVID-19 vaccine shot as of Wednesday morning, said Public Health Director Angela Weideman. A week ago, she estimated that perhaps 500 people had been immunized.

Weideman is confident that vaccinations can continue at that rate.

“Right now, it does look like we should be able to do 1,000 per week,” Weideman said during her weekly COVID-19 press conference.

Weideman said shots are now being given at her office, at health clinics, and some pharmacies are signing up to help administer them. With so many options, Weideman is optimistic the county can continue to meet or exceed 1,000 vaccines a week.

Chippewa County has an estimated population of about 66,000 residents, and Weideman noted that means roughly 1 in every 32 county residents have received at least one dose.

She stressed that some of those Chippewa County residents may work in other counties and received their dose there. So far, 1A workers, such as medical staff and long-term care employees, have been receiving vaccinations. Weideman didn’t know what percent of those employees have opted to not take the vaccine.

“The numbers willing to take it now are higher than they were two months ago,” she said.

Weideman said that increased willingness to take the vaccine is in part because they now know someone who has taken it and not had any adverse side effects.

Next week, 1B workers, specifically law enforcement and firefighters, will start receiving their vaccinations. She isn’t sure when other 1B workers will be eligible for vaccinations. However, school teachers and employees are expected to receive their shots in early February.

Vaccines produced by drug manufacturers Pfizer and Moderna have both been approved for combating COVID-19. Weideman said both are being distributed and used in the county. The Pfizer vaccine requires storage at about 90 degrees below zero, which presents an additional challenge, but Weideman said it hasn’t been a problem so far.

“Thus far, the community partners are finding it doable; they aren’t having problems with the cold storage,” Weideman said.

For the first time in a month, Chippewa County saw more than 200 new COVID-19 cases. Weideman said 292 people tested positive among 722 tests given, with the positivity rate at 40.4%. In comparison, the state’s positivity rate in the past week is 29.4%.

“I’m thankful we’re not at the levels we were in October and November (when more than 800 people tested positive weekly), but they still are climbing compared to where they were in December,” she said. “It’s very important for these numbers to go the other direction, and go down again.”

Weideman said she is fearful that people were too relaxed with their gatherings over the holidays, and that is going to lead to an increase in cases.

Including two deaths reported Wednesday, there were five overall COVID-19-related deaths in the county in the past week.

Currently, nine people are hospitalized with symptoms from the virus, up from eight last week, and still down significantly from the peak of 25. Overall, 183 Chippewa County residents have ever been hospitalized.

Approximately 73% of beds at hospitals in northwestern Wisconsin are in use, including 83% of ICU beds.

The county remains at a “high risk” level, with a recommendation that gatherings be limited to 15 indoors and 50 outdoors.

EAU CLAIRE — A Fall Creek woman has been charged in connection with a September two-vehicle crash on U.S. 12 between Fall Creek and Augusta that killed an Osseo man.

Nancy J. Haldeman, 64, 8201 Nine Mile Creek Road, is charged in Eau Claire County Court with a felony count of homicide by negligent operation of a vehicle. She was negligent because she caused the crash by passing another vehicle in heavy fog, authorities said.

Haldeman is scheduled to make her initial court appearance on Feb. 3.

According to the criminal complaint and the Eau Claire County Sheriff’s Office:

Authorities were called to the crash scene in the town of Lincoln at 6:15 a.m. Sept. 10.

A 2008 silver Chevrolet Trailblazer driven by Haldeman was eastbound on U.S. 12 and attempted to pass a vehicle in the dark in heavy fog. During the attempt, Haldeman’s vehicle struck a 2003 maroon Chevrolet Suburban head on. The driver of the Suburban, Ricky A. Bahr, 49, died at the scene.

Haldeman was treated for her injuries at an area hospital. She had been in critical condition.

The witness said she noticed a vehicle traveling westbound on U.S. 12 that had a headlight out. All of a sudden, the witness said, Haldeman’s vehicle pulled out into the westbound lane to pass the vehicle in front of her and struck the oncoming vehicle head on.

The second witness said he noticed two vehicles catching up to him from behind. One vehicle attempted to pass him and then backed off.

The second witness said he then noticed an approaching westbound vehicle that appeared to have a missing headlight.

The second witness said shortly after he got to work, another vehicle drove into the parking lot and the driver told him about the crash and that Haldeman appeared to be involved.

The National Weather Service had issued a special alert that morning for patches of dense fog in east-central Minnesota and west-central Wisconsin. The alert told motorists to “exercise caution if traveling and use low beam headlights.”

If convicted, Haldeman could be sentenced to up to five years in prison.