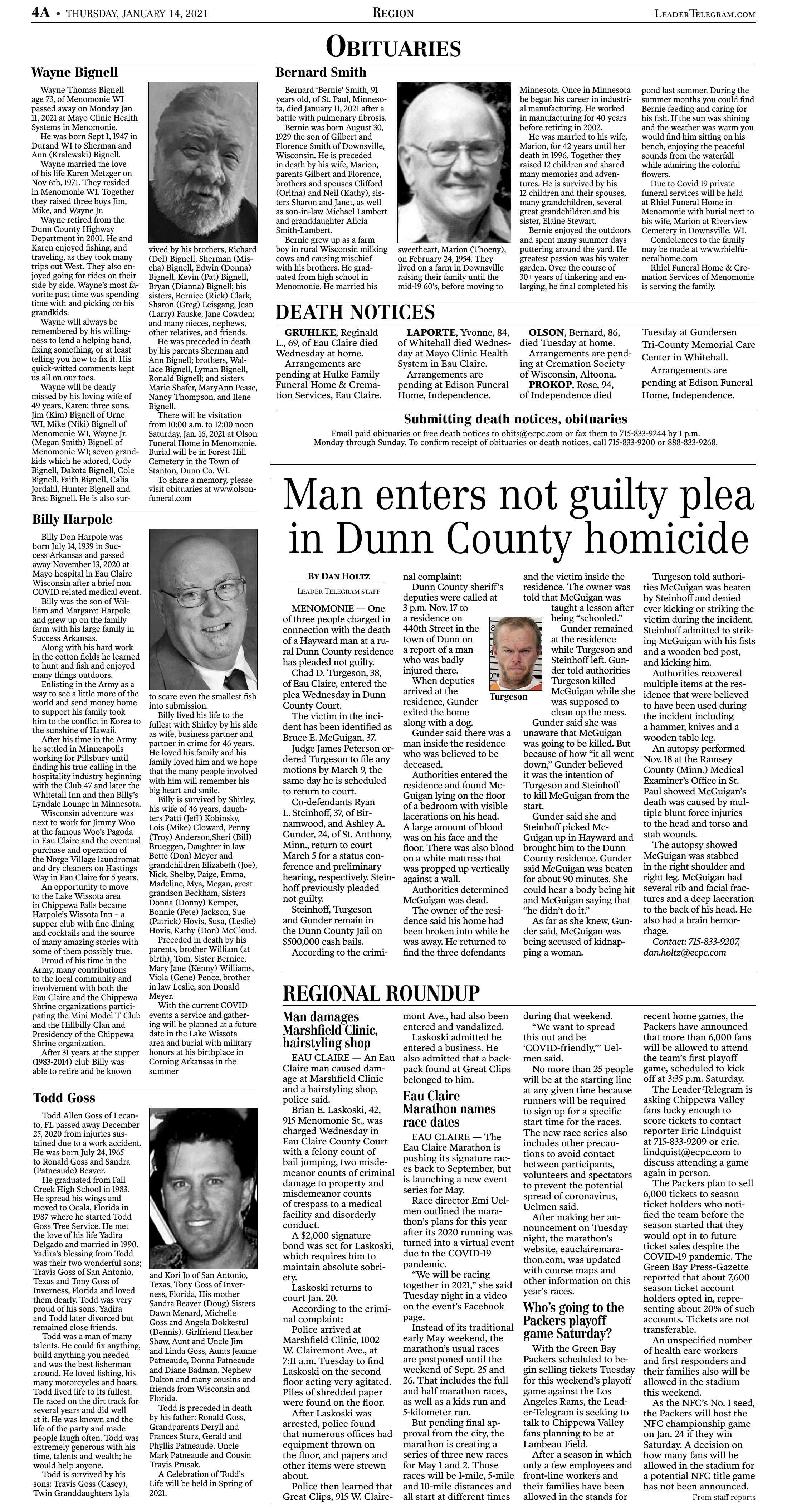 Bernie was born August 30, 1929 the son of Gilbert and Florence Smith of Downsville, Wisconsin. He is preceded in death by his wife, Marion, parents Gilbert and Florence, brothers and spouses Clifford (Oritha) and Neil (Kathy), sisters Sharon and Janet, as well as son-in-law Michael Lambert and granddaughter Alicia Smith-Lambert.

Bernie grew up as a farm boy in rural Wisconsin milking cows and causing mischief with his brothers. He graduated from high school in Menomonie. He married his sweetheart, Marion (Thoeny), on February 24, 1954. They lived on a farm in Downsville raising their family until the mid-19 60’s, before moving to Minnesota. Once in Minnesota he began his career in industrial manufacturing. He worked in manufacturing for 40 years before retiring in 2002.

Bernie enjoyed the outdoors and spent many summer days puttering around the yard. He greatest passion was his water garden. Over the course of 30+ years of tinkering and enlarging, he final completed his pond last summer. During the summer months you could find Bernie feeding and caring for his fish. If the sun was shining and the weather was warm you would find him sitting on his bench, enjoying the peaceful sounds from the waterfall while admiring the colorful flowers.

Due to Covid 19 private funeral services will be held at Rhiel Funeral Home in Menomonie with burial next to his wife, Marion at Riverview Cemetery in Downsville, WI.

Condolences to the family may be made at www.rhielfuneralhome.com

Arrangements are pending at Cremation Society of Wisconsin, Altoona.

MENOMONIE — One of three people charged in connection with the death of a Hayward man at a rural Dunn County residence has pleaded not guilty.

The victim in the incident has been identified as Bruce E. McGuigan, 37.

Judge James Peterson ordered Turgeson to file any motions by March 9, the same day he is scheduled to return to court.

Steinhoff, Turgeson and Gunder remain in the Dunn County Jail on $500,000 cash bails.

Dunn County sheriff’s deputies were called at 3 p.m. Nov. 17 to a residence on 440th Street in the town of Dunn on a report of a man who was badly injured there.

When deputies arrived at the residence, Gunder exited the home along with a dog.

Gunder said there was a man inside the residence who was believed to be deceased.

Authorities entered the residence and found McGuigan lying on the floor of a bedroom with visible lacerations on his head. A large amount of blood was on his face and the floor. There was also blood on a white mattress that was propped up vertically against a wall.

The owner of the residence said his home had been broken into while he was away. He returned to find the three defendants and the victim inside the residence. The owner was told that McGuigan was taught a lesson after being “schooled.”

Gunder remained at the residence while Turgeson and Steinhoff left. Gunder told authorities Turgeson killed McGuigan while she was supposed to clean up the mess.

Gunder said she was unaware that McGuigan was going to be killed. But because of how “it all went down,” Gunder believed it was the intention of Turgeson and Steinhoff to kill McGuigan from the start.

Gunder said she and Steinhoff picked McGuigan up in Hayward and brought him to the Dunn County residence. Gunder said McGuigan was beaten for about 90 minutes. She could hear a body being hit and McGuigan saying that “he didn’t do it.”

As far as she knew, Gunder said, McGuigan was being accused of kidnapping a woman.

Turgeson told authorities McGuigan was beaten by Steinhoff and denied ever kicking or striking the victim during the incident. Steinhoff admitted to striking McGuigan with his fists and a wooden bed post, and kicking him.

Authorities recovered multiple items at the residence that were believed to have been used during the incident including a hammer, knives and a wooden table leg.

An autopsy performed Nov. 18 at the Ramsey County (Minn.) Medical Examiner’s Office in St. Paul showed McGuigan’s death was caused by multiple blunt force injuries to the head and torso and stab wounds.

The autopsy showed McGuigan was stabbed in the right shoulder and right leg. McGuigan had several rib and facial fractures and a deep laceration to the back of his head. He also had a brain hemorrhage.

A $2,000 signature bond was set for Laskoski, which requires him to maintain absolute sobriety.

Police arrived at Marshfield Clinic, 1002 W. Clairemont Ave., at 7:11 a.m. Tuesday to find Laskoski on the second floor acting very agitated. Piles of shredded paper were found on the floor.

After Laskoski was arrested, police found that numerous offices had equipment thrown on the floor, and papers and other items were strewn about.

Police then learned that Great Clips, 915 W. Clairemont Ave., had also been entered and vandalized.

Laskoski admitted he entered a business. He also admitted that a backpack found at Great Clips belonged to him.

He was born Sept 1, 1947 in Durand WI to Sherman and Ann (Kralewski) Bignell.

Wayne married the love of his life Karen Metzger on Nov 6th, 1971. They resided in Menomonie WI. Together they raised three boys Jim, Mike, and Wayne Jr.

Wayne retired from the Dunn County Highway Department in 2001. He and Karen enjoyed fishing, and traveling, as they took many trips out West. They also enjoyed going for rides on their side by side. Wayne’s most favorite past time was spending time with and picking on his grandkids.

Wayne will always be remembered by his willingness to lend a helping hand, fixing something, or at least telling you how to fix it. His quick-witted comments kept us all on our toes.

Billy was the son of William and Margaret Harpole and grew up on the family farm with his large family in Success Arkansas.

Along with his hard work in the cotton fields he learned to hunt and fish and enjoyed many things outdoors.

Enlisting in the Army as a way to see a little more of the world and send money home to support his family took him to the conflict in Korea to the sunshine of Hawaii.

After his time in the Army he settled in Minneapolis working for Pillsbury until finding his true calling in the hospitality industry beginning with the Club 47 and later the Whitetail Inn and then Billy’s Lyndale Lounge in Minnesota.

Wisconsin adventure was next to work for Jimmy Woo at the famous Woo’s Pagoda in Eau Claire and the eventual purchase and operation of the Norge Village laundromat and dry cleaners on Hastings Way in Eau Claire for 5 years.

An opportunity to move to the Lake Wissota area in Chippewa Falls became Harpole’s Wissota Inn – a supper club with fine dining and cocktails and the source of many amazing stories with some of them possibly true.

After 31 years at the supper (1983-2014) club Billy was able to retire and be known to scare even the smallest fish into submission.

Billy lived his life to the fullest with Shirley by his side as wife, business partner and partner in crime for 46 years. He loved his family and his family loved him and we hope that the many people involved with him will remember his big heart and smile.

Todd Allen Goss of Lecanto, FL passed away December 25, 2020 from injuries sustained due to a work accident. He was born July 24, 1965 to Ronald Goss and Sandra (Patneaude) Beaver.

He graduated from Fall Creek High School in 1983. He spread his wings and moved to Ocala, Florida in 1987 where he started Todd Goss Tree Service. He met the love of his life Yadira Delgado and married in 1990. Yadira’s blessing from Todd was their two wonderful sons; Travis Goss of San Antonio, Texas and Tony Goss of Inverness, Florida and loved them dearly. Todd was very proud of his sons. Yadira and Todd later divorced but remained close friends.

Todd was a man of many talents. He could fix anything, build anything you needed and was the best fisherman around. He loved fishing, his many motorcycles and boats. Todd lived life to its fullest. He raced on the dirt track for several years and did well at it. He was known and the life of the party and made people laugh often. Todd was extremely generous with his time, talents and wealth; he would help anyone.

A Celebration of Todd’s Life will be held in Spring of 2021.